Sloane Leong’s Prism Stalker, released this week, just might be the comic of the moment.

It’s not just that the story of a young girl looking for her family, told in an eye-catching psychedelic, biopunk horror tone, makes it feel at times like the offspring of Annihilation and A Wrinkle in Time — although that certainly plays into it. At its heart, however, artist and writer Leong is telling a lyrical, deeply personal story about identity and rediscovering roots in a world that seeks to ignore all but the dominant culture.

The series follows Vep, a refugee living as an indentured servant for an alien race that relies upon her and others like her to survive. Curious and brave, she longs for a better life for herself and her family, but when the opportunity provides itself, it is far from what she expected. Complex, challenging and alien, Prism Stalker is a comic that reads unlike almost anything else out there, but feels so in tune with what’s happening in the world that it’s almost unsettling. Heat Vision talked to Leong about the series’ origins.

I was raised in Hawaii, where historically the merging, creation and evolution of languages was a crucial means of survival under extreme oppression. I draw a lot on my Hawaiian heritage, specifically the cultural and political situation around the 1890s. I’ve always wanted to present a sort of fantastic version of that historical environment today since Hawaiian history and culture is often overlooked. The biopunk aspect stems from my own fascination with the natural world and fear of the body and its underrated technological potential. The medium of the story itself changed over time, going from prose to visual novel and then settling into a comic in 2013. I’m really excited it’s finally getting to see the light of day!

That’s interesting that you talk about drawing on your heritage and talking about the oppression of Hawaiian culture; Prism Stalker reads like a story that is familiar to anyone who came from a culture that has been lost or subsumed by another — is this a subject that’s particularly close to your heart? 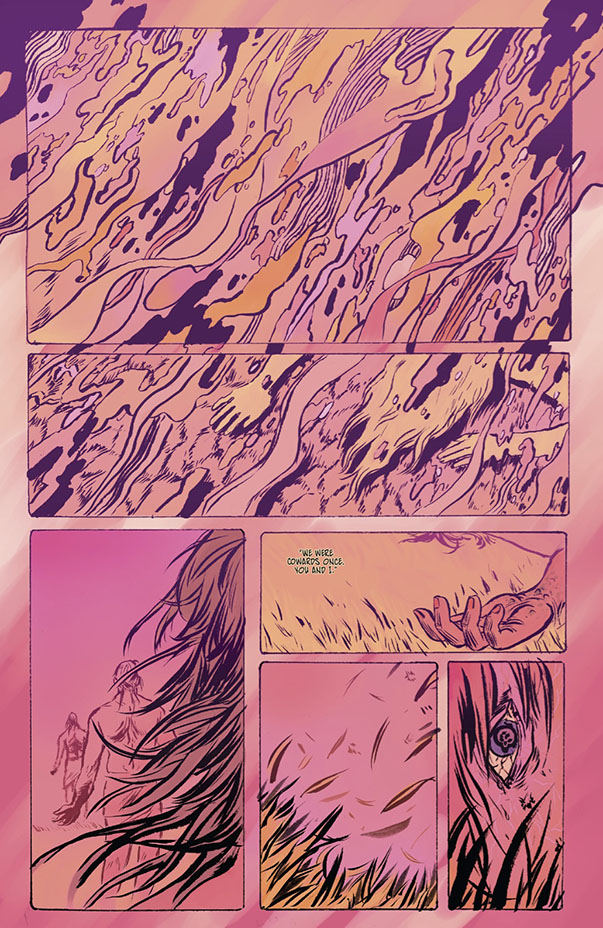 In PS, we’re going to follow Vep as she goes through the journey of recognizing this annihilation of ancestral history, ones identity and physical connections to land and then begins to figure out how to reconnect with those elements that have been forcibly stripped away from her. This mirrors a journey I think a lot of young marginalized people are taking on today, one that I’m still in and struggling through, as they begin to interlink lost pasts with their present selves.

The first issue feels immersive and, in many ways, disorienting in a positive sense. How much of Vep’s world had you worked out in advance, versus being intuitive while creating the issue? It feels a very intuitive book in the best way — everything flows organically, but to such a degree that I wondered if you’ve worked everything out in great detail so it can all hang together.

There’s an underlying foundation of organized society with systems, rules and customs that all the citizens (which include tons of alien cultures) adhere to that I built beforehand. There’s institutions in this civilization that are solidly fleshed out that all citizens acknowledge but the cultures thenselves I like to grow and create organically, to contrast Vep’s perspective or drive home the theme of the issue. 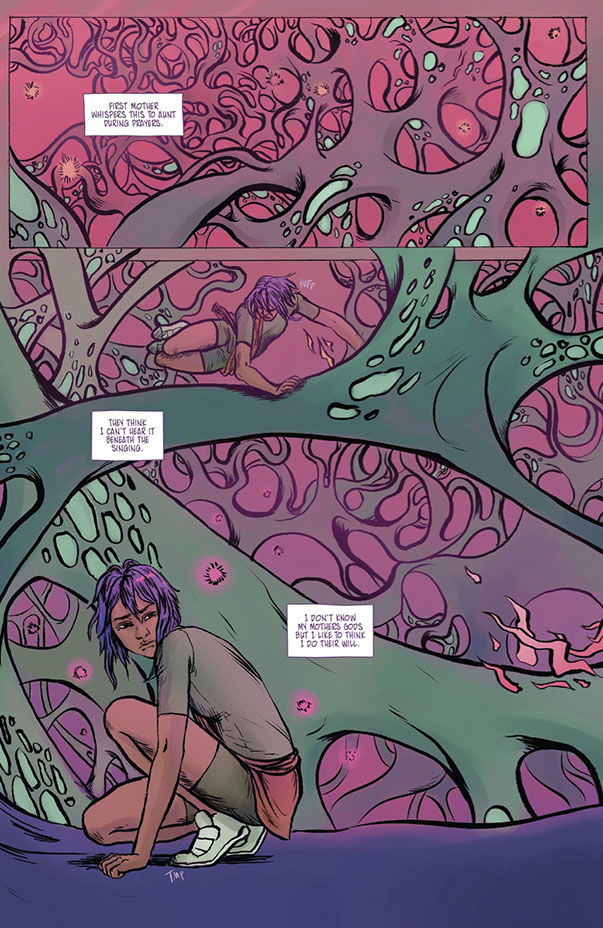 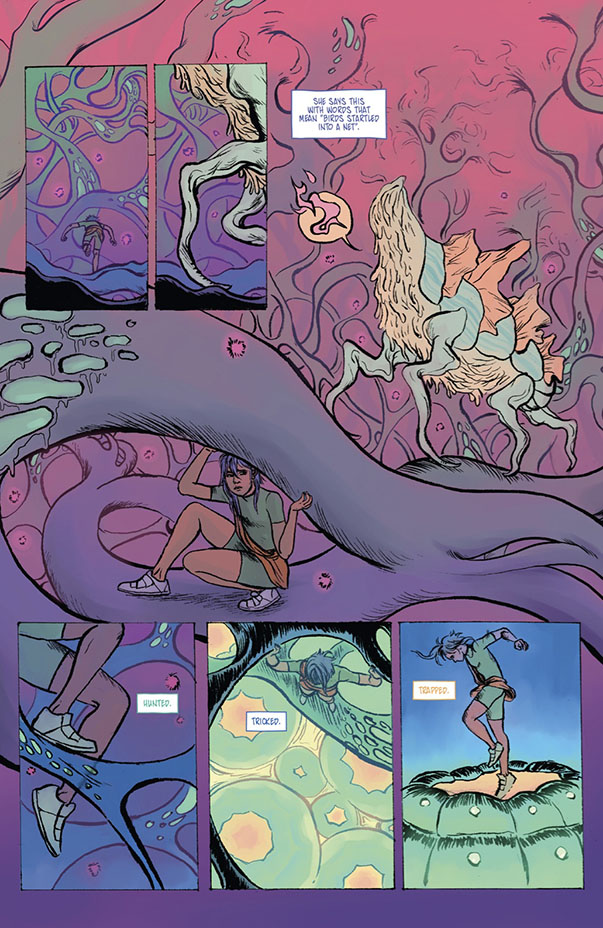 I see a lot of different influences in the way the book looks, from the Brandon Graham, James Stokoe, Simon Roy school of sci-fi like a comic like Prophet through to nods to manga storytelling, but it comes together and reads like its own thing, its own language — which feels in tune with the story in many ways. Am I over-reading, or is there a theme of synthesis throughout this entire project, in the text and also in the creation of it?

I’ve know Brandon and James since I was a teen and I consider them big influencers and supporters of mine. I’d definitely say every element of this series is meant to complement each other and has specific intent and meaning, from the colors of the lettering to the shapes of panels and the style it’s drawn in, which will change often. Without that stranglehold I have in every element of the comic, it wouldn’t be what it’s meant to.

You mention the colors, and I have to say, it makes sense that a book called Prism Stalker has such an amazing palette: the colors in this first issue are utterly vibrant and feel integral to the story. Were they in your mind when writing/drawing the book?

Yeah, I’m pretty well known for my obnoxious color palette! I wanted to present a different sort of look and feel for this comic especially since it’s a science fiction story and the aesthetic in this genre is predominantly Western, angular, white, textureless. I drew a lot on the flora and aquatic animals of Hawaii: Everything is bold, neon, clashing. I also pulled from my Latina roots and the bright, flat, dense compositions of Mexican folk art.

I’m fascinated by the fact that each issue of the series will have an original soundtrack — where did that idea come from?

Music is a big part of my process when drawing, it gives me momentum and energy in my line. I’ve also dabbled in animation and an obsessed with movies and love a good soundtrack! I have a friend, Porpentine, who has Neotenomie score her text-based games and visual novels, and so I asked her to do the same for Prism Stalker!

Neotenomie is a massively skilled musician, and I can’t help but get really corny and poetic when trying to describe her songs. Sometimes they’re like shattered glass on oboe strings, low and sparkling, and sometimes she makes things that have depth, like an endless chorus reverberating from a sinkhole. She captures the rhythms and tensions of each scene so perfectly and adds this whole other dynamic emotional layer to the story, a secondary impact that punches my images through into a deeper part of your mind. My suggested reading experience is read it once in silence, then read it to the music, letting it control the pace. Just let your eyes flow over the images and text without latching on. Let the music tell you where to go. You can find each soundtrack for each issue as they debut here.

Finally, what would you give as a pitch to someone who isn’t necessarily familiar with comics to get them to try out the first issue?

Hmm. I would say that it’s a vast psychological action/adventure with an indigenous perspective. If they want something sincere, challenging, unique, then they should check it out. It’s got a flashy sci-fi wrapper, but Prism Stalker is loaded with difficult personal themes, ugly compromises and small, healing triumphs. It’s a kaleidoscopic story that you can dream along with me, but still has edges to catch your heart on. 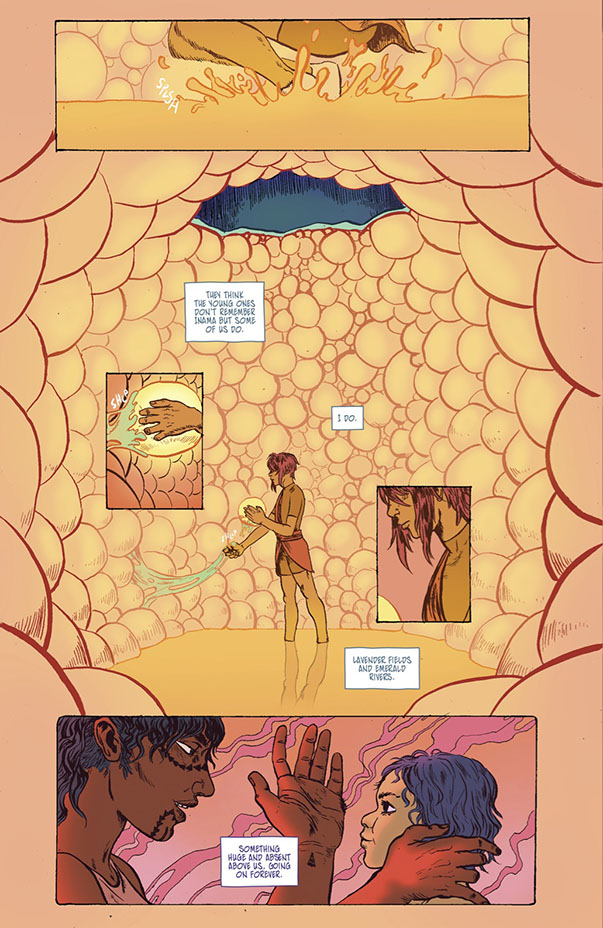 Prism Stalker No. 1 is available digitally and in comic book stores now.