What happens when two brothers grow up to become a television producer and a chef? They team up to create a new interactive video app that purports to teach anyone to become a master chef.

Eli Holzman, the Emmy-winning producer behind Leah Remini: Scientology and the Aftermath, and his younger brother Daniel Holzman, the founder of New York’s The Meatball Shop, have launched cooking app Foodie Project with over 100 step-by-step videos.

The venture — which was developed by Eli’s production company, The Intellectual Property Corp. — was born out of the elder brother’s lack of cooking prowess despite Daniel’s years of classical training at such restaurants as Le Bernardin and Aqua. “I’m great at doing dishes,” Eli says with a laugh. The Holzmans first struck on the idea after Eli asked Daniel to record a video teaching him how to make salmon.

Project Foodie (a play on Eli’s first big hit, Project Runway) launched Wednesday for iOS devices. It contains around 100 video recipes hosted by Daniel that, combined, can create about 30 full meals, including Pop’s Chicken Parmesan, The Meatball Dinner and Chicken Adobo. The app is free to download but full access to all the recipes requires a $3-per-month subscription. More recipes from chefs around the country will be added in the coming months.

As for whether Project Foodie has turned its co-founder into a gourmand, not even Daniel knows. “I actually have never tasted the salmon he’s cooked from my video,” he says. Eli, however, says that he’s proof that Project Foodie can work: “It’s really good, take my word for it.”

How did a TV producer and a chef decide to create an app?

Eli: My mom’s a really good cook and my brother is a great cook, so everybody assumes I’m this great cook, too. I have a really nice kitchen with all this great stuff in it, but I have this dirty secret. I don’t know how to cook. Why would I ever cook? I had a professional chef living in my house from the time I was a kid. There was this one recipe in particular that I used to ask Daniel to cook for me all the time, salmon with pickled chili vinaigrette and a cucumber side salad. It was the dish I would ask for and about 10 minutes later, we were eating. And yet I somehow screwed it up. Daniel and I once had an ice cream business together, and we had a manufacturing process for this ice cream product. It was very difficult to describe the mechanics over the phone, so what he would do sometimes is shoot a little video to explain what he was talking about and just text it to me. So in a fit over not being able to make this recipe, I asked him to just shoot a video. But I’m a producer, so I had a crew in New York that I knew I could send over to get it. What he sent me back was this video that let me cook the meal perfectly.

Why was learning to cook so important to you?

Eli: I think there’s something magical about home cooking. It’s a big part of who I am and how I grew up. I got married a few years ago. I have a little baby and I desperately want her to grow up in a house with that cooking.

How did that one moment turn into a concept for an app?

Daniel: For five years we have been talking about what can we work on together. This wasn’t the thing that we were going to work on together, but the reality is that I’m passionate about teaching people how to cook. The more that I’ve spent time with it, the more I realize that every single thing out there is built on this prerequisite that you know how to cook — every cookbook, every time a chef talks to you on a cooking show, they’re telling you to sweat something or sautée something, assuming you know how to sweat or sautée. It was like, wow, this is an amazing thing that people should have. Let’s explore it and see if we can get people as excited as we are. This the first time in our lives that we’ve embarked on a journey that didn’t really have a return on investment, like here’s how much money we’re going to make, and here’s exactly what the plan is.

Eli: I’ve spent a lot of time thinking about what’s new and next. Once upon a time, Project Greenlight was new and next and Project Runway was new and next. Now our mobile devices are a really interesting new frontier for a content creator, because they’re not just a passive screen the way your television screen is at home or a movie screen is. And yet all the content that’s been created for them is passive content. When we stumbled onto the fact that you could cook along to these videos, we realized that maybe this is a potential future of content. We’ve struggled to come up with ways to even characterize it. One thing we call it is “experience entertainment,” because the idea is you’re doing something, you can do it with another person, and you’re enriching yourself. Also, I was starting a new company and I thought, I am crazy if I don’t spend some portion of my time trying to innovate. This is the first glimpse of what that could be.

Daniel: Remember when TiVo first came out? Eli was going to recreate the Choose Your Own Adventure books. He was, like, “We’re going to revolutionize the television watching process.” So actually, we’ve been working on this project for 20 years. 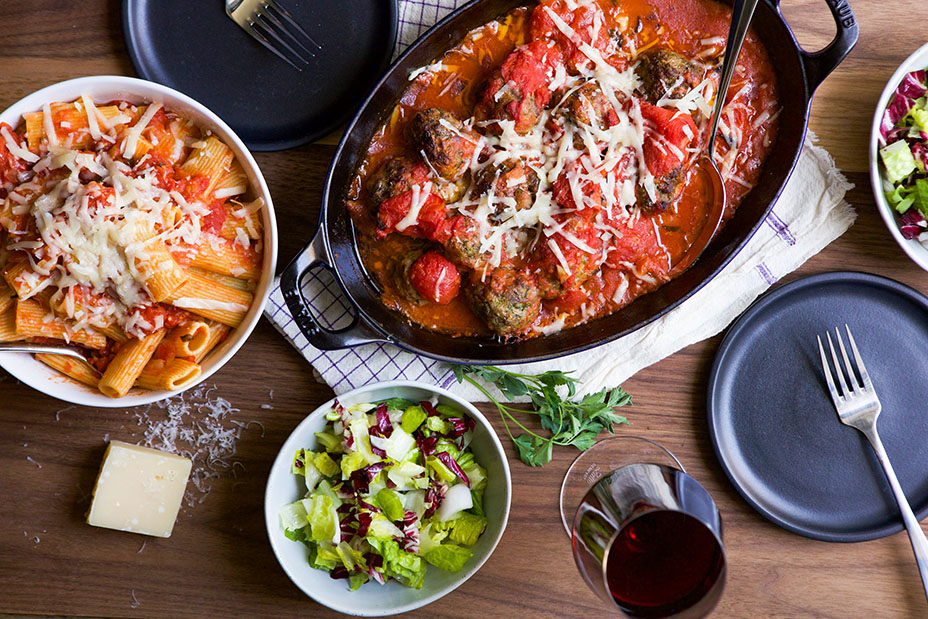 How is what you’re doing different than what we see on Food Network?

Eli: In that first video, Daniel didn’t edit. Every other food video you’ve ever seen in your life is edited. They show one thing, then they pull out a bowl of them all chopped. Maybe because he knew he was making this video for his brother, Daniel started talking to the lens like it was me. He was like, “Eli, go get your frying pan.” So I went and got my frying pan. And he went and got his. Then he was, like, “Now go get your knife.” And so I got my knife. We’d accidentally stumbled onto a cook-along video. It’s like an exercise video. In an exercise video, you watch the person onscreen and you replicate their behavior to get those results. We’d never seen that done for cooking. And it worked miraculously well because you can see the way they’re doing it.

How did going into business together impact your relationship?

Daniel: As kids, if someone was trying to fix something it would turn into the fistfight, because they wouldn’t give it up and let the other person get to try. So we had a rule where you got it for five minutes and then you had to give it up for five minutes. In this particular case, we’re talking about filmmaking and storytelling, which is what my brother does and he does it at a world-class level, and cooking, which is something I’ve spent my life studying. The reality is that it’s pretty easy to work on something when you completely trust the other person and completely respect that what they’re doing.

Eli: We’re both Type A and a little intense. What we’ve had to learn over the years — and now I think we’re really good at it — is respecting and listening to the other person and understanding them and giving them room. There’s a real freedom in knowing that there’s no ulterior motive. We both want the best possible for the project, but we’re passionate and sometimes we’re going to disagree. Probably the best thing about working with my brother is that anytime I was like, “Ugh, man, this is so hard,” I had a person saying, “No, come on, we can keep going.”

What’s your favorite food memory from your childhood?

Eli, have you found that any of your producing skills have translated well to cooking?

Eli: It’s funny, I wouldn’t have thought of it until you asked. But when you set out to make a television show or a documentary, you have something in mind, but quickly you start discovering that you’re getting something different in the camera. The whole world doesn’t just like magically conform to your imagination. So then it becomes a game of actually trying to pivot and making the best version possible out of what you actually have, as opposed to trying to force what this slightly different thing is into what you wanted it to be in the first place. You go back into the editing room and you work to make the best possible version of this story. Something I learned from watching Daniel cooking in Project Foodie is to taste as you go. If it’s too salty, add lemon. Lemon counteracts salt. I didn’t know that, that’s nuts. So if it’s too salty, it doesn’t mean, “Well, that sucks, we’re going to eat a salty dinner or I’m going to have to throw it away.” The idea that you can still land the plane, that’s the thing that’s exactly like working in television, and it turns out it’s the case in cooking, too.

What does success for Project Foodie look like to you?

Daniel: For me, the dream would be that having one culinary resource that’s all encompassing, where you can find the best recipes that are taught to you by that cuisine’s best chef. When we started, we had this vision that we could have the Wikipedia of cooking. We could have 100,000 recipes that could be in every language and it could have every dish known to mankind, all cooked by a great chef. We said, “Let’s start with a modest goal and then see how people react to it,” because that’s the feedback that will help us to grow.

Eli: I’d like it to be an interactive, video-driven Wikipedia of all the world’s recipes. If I want to have Tandoori Chicken or some amazing Szechuan dish and there’s a great Chinese chef in their home 8,000 miles away, the app is seamlessly translated so I know what ingredients to get and can learn the authentic version and taste it in my house. Most people aren’t able to leave their town to journey to all the fancy restaurants all over the world that you read about or you watch documentaries about. But if the chefs give us a great,perfect cook-along meal, you’ll be able to replicate that dish and eat it in your own home.