Jason Trotter did not pitch himself for this story.

His curious career swing proved to be enough of a relevant news peg for an interview request that could result in some ink, free of the spin or strategy discourse that he may or may not have relied on during his nearly two-decade career as a talent and fashion publicist and brand expert. Fortunately, he said yes, because if he got anything from his previous career, it’s the knowledge of what makes for a good story. And he’s got a great one.

Trotter, a native of Wayne City, Illinois, first charted a career in Hollywood almost 20 years ago as a talent publicist, cutting his teeth at venerable firm PMK (now PMK-BNC) before moving on to boutique outfit Patricola Lust PR. During that time, he worked with such clients as Dax Shepard, Heather Graham, Amber Heard, Rhona Mitra, Portia de Rossi, Kim Cattrall and Allison Janney. In 2005, Trotter then segued to his own firm, Trotter Public Relations, where he focused on fashion and lifestyle PR, representing brands like Roots Canada, Faircloth & Supply, Zeynep Arcay, Elle Sasson and Face Halo.

Jody Miller, Country Hitmaker Behind 'Queen of the House,' Dies at 80

An avid traveler and longtime art aficionado, Trotter picked up a paint brush and began testing his creative muscles about a decade ago, first just for fun, and later to fill the walls of his Los Angeles apartment. Friends took notice and, as the hobby gained momentum, the space in his garage disappeared. In order to make room — and quietly test the marketplace for his bold, geometric triptychs, a style he ultimately settled on — Trotter posted some pieces on Chairish, the online vintage furniture, art and home accessories sales service.

He sold a few, and soon gained some famous fans like fashion designer Veronica Beard, who purchased Trotter originals for her Melrose Place store. But that was just the beginning.

Trotter is now just months into dropping his PR side hustle and focusing on art full time. Following debuts at Saatchi Art’s The Other Art Fair in Brooklyn and Los Angeles, he’s currently at work on a major project creating 146 original artworks for Kelly Wearstler’s new Proper Hotel in downtown Los Angeles. But long before that opens, the general public will have a chance to check out Trotter’s work at Ron Robinson in Santa Monica courtesy of a reception and exhibition Sept. 8, running through Oct. 4, followed by an exhibition at Soho House West Hollywood from Sept. 17 to Oct. 15, and The Other Art Fair in Santa Monica from Oct. 25 to 27.

Ahead of these events, he spoke with The Hollywood Reporter about making the move from red carpets to canvas, what advice he has for other professionals looking to make a similar transition and what indoor cycling has to do with any of this.

From publicist to painter, it has a nice ring to it. But it’s also an unlikely transition. There are actors who paint and there are publicists who’ve become world-famous filmmakers — I’m looking at you, Ava DuVernay — but I can’t think of any publicists who are now painters. What’s the reaction you’ve been getting when you tell people about your new career?

Painting has been a hobby for over 10 years, but it was an escape and something I did quietly on my own without discussing too much, so most are surprised and also really thrilled to see how quickly it’s all unfolded.

How would you describe your early work, and have you always done these colorful geometric abstracts? Or did you play around with other styles first?

I played around with a few styles early on and in recent years, but as it became a more serious hobby it sort of naturally gravitated toward applying the hard-edged painting style to the triptychs. I’m really drawn to the process of marrying a few very simple elements together in a way that results in something really dynamic and bold. 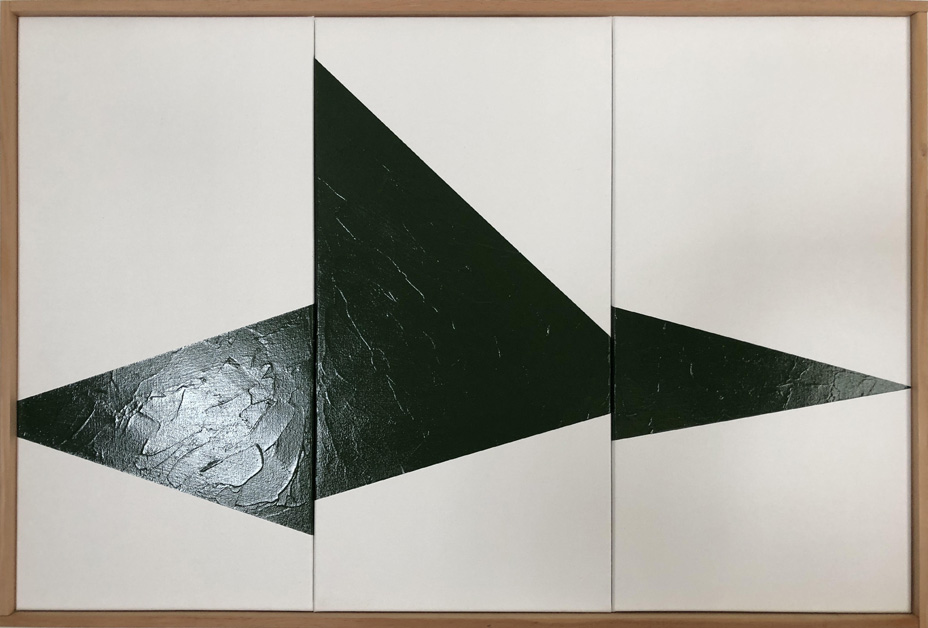 This style demands absolute perfection. How much of a challenge — or headache — is that? And does that mean you have dreams (or nightmares) about perfect lines?

It can be challenging, but it’s forced me to become hyper aware of every detail at every moment, and because of that I’ve grown and learned more quickly than I would have otherwise. I’ve also learned how to dismember an unruly canvas in two seconds flat … also a useful skill!!

Who are your favorite artists?

It’s such a long list, but Carmen Herrera, Ellsworth Kelly, Josef Albers and Frank Stella have been the most influential on my current work.

Where do you go to clear your head or for artistic inspiration in Los Angeles?

I clear my head at Flywheel on Larchmont, and I travel regularly for travel for inspiration. I always return from a trip inspired and eager to get back to work. 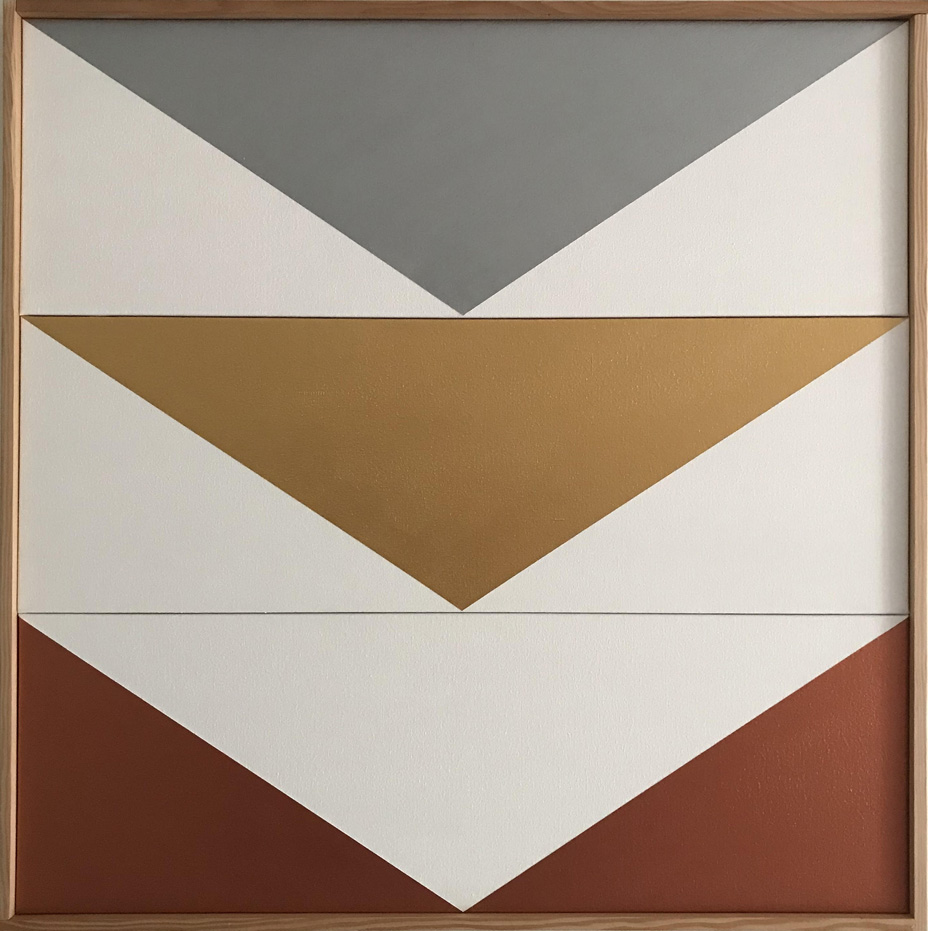 You got your feet wet by putting your paintings up on Chairish. Tell me about that decision and what that felt like to test the waters in that way?

Yes, painting had become a more serious hobby and suddenly my garage was full, so I had to decide what I was doing. My choices were basically: Stop, or sell them. I knew nothing about navigating the art world, and although my friends were loving the work I’d done, I had no idea how it would be received by others. What I did know is that art had become a big category for Chairish, so testing a few pieces there initially was the most obvious thing I knew to try. I put about a dozen pieces up initially having no idea what would happen and zero expectations. I was very excited when they started selling immediately.

Veronica Swanson Beard was an early fan. What did that mean to you and how many works are you doing for her?

I was flattered of course, but more than anything else it was really encouraging and was another thing that kept me plugging away. I did a three-piece, 14-foot installation for their Melrose Place store when it opened in February. I have a large piece that will be up in their shop at Bergdorf Goodman by the end of this week, and I’m working on a few pieces for their Soho store as well.

You’ve had a nice and enviable swing from side hustle to full-time artist. When did you know that it was time to make the leap and devote all your time to this burgeoning career?

During the spring I suddenly had a lot of things happening at once with my art, so it became really clear that it was becoming full time, and within a couple of months the timing had worked out nicely so that I was able to wrap up with the remaining clients I had.

Your accomplishments thus far are worth noting: You’ve shown at Saatchi Art’s The Other Art Fair in Brooklyn and Los Angeles, and you’re at work on a major project creating 146 original artworks for Kelly Wearstler’s new Proper Hotel in downtown Los Angeles, according to WWD. What can you tell me about the hotel project and what that means to you?

I’m a big design buff and have been a huge fan of Kelly’s work for many years now, so when I received the first email I was in complete shock. I’m really honored to be part of the project. It’s also exciting because what I’m creating for them is very different than what my work has consisted of so far. It’s what I had been envisioning for awhile as the next evolution of my work, so it’ll be really fun to unveil it when the hotel opens next year. 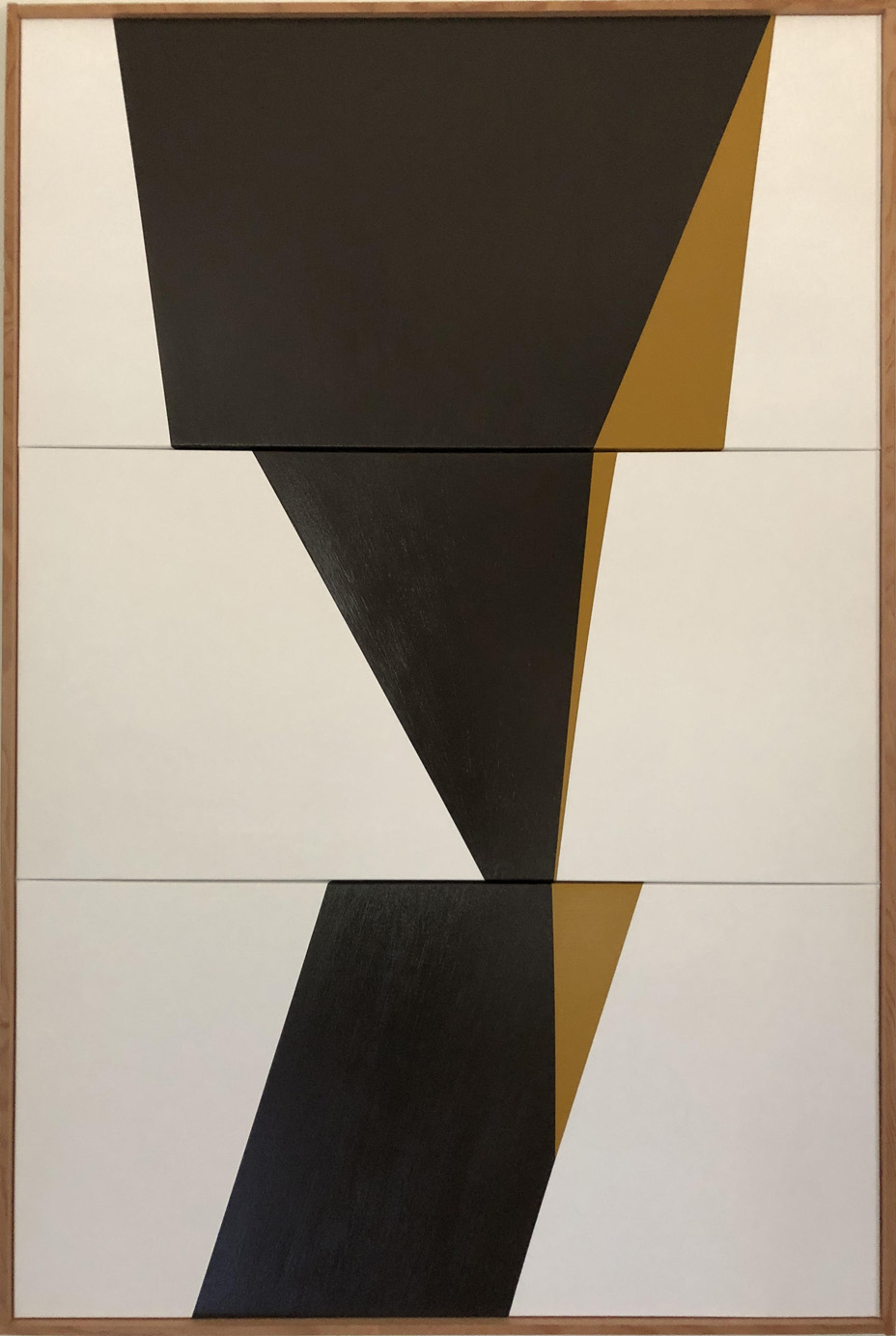 Now that you’ve gotten these jobs under your belt, where do you see your artist career going from here? Any dreams or places you’d like to show your work?

I would love to say there’s a master plan at play here, but I’m just taking it day by day. The publicist in me definitely feels the need to have a strategy in place, but I’m resisting that at the moment. So many amazing opportunities have found their way to me so quickly that I feel like I need to keep my head out of it and just go with the flow.

I’m really grateful for all the years I spent in PR, everyone I worked with and everything I learned. That experience added skills to my tool belt that have helped me position myself to walk more confidently down a new path, but at the moment I feel like I’m doing exactly what I’m supposed to be doing and I’m not missing anything.

What advice do you have for anyone, particularly publicists or other entertainment industry insiders, who are looking to transition to a new career?

Find something you truly love and follow your instincts.

Flashing back to this shiny happy 5-piece 20-foot commission I delivered to ecstatic owners in May. Collaborating with private clients, brands, hotels, etc. has made up the majority of my work this year, and I love how the process takes me outside my normal approach to my work. DM or use my email in bio to inquire. Happy Friday!!!! • • • • • • • #fbf #art #artist #abstractart #geometric #geometricabstract #interiordesign #painter #architecture #triptych #losangeles #artistsoninstagram #artwork #contemporaryart #fineart #artstudio #modernart #artlover #emergingartists #artcurator #laart #artcollector #instaart 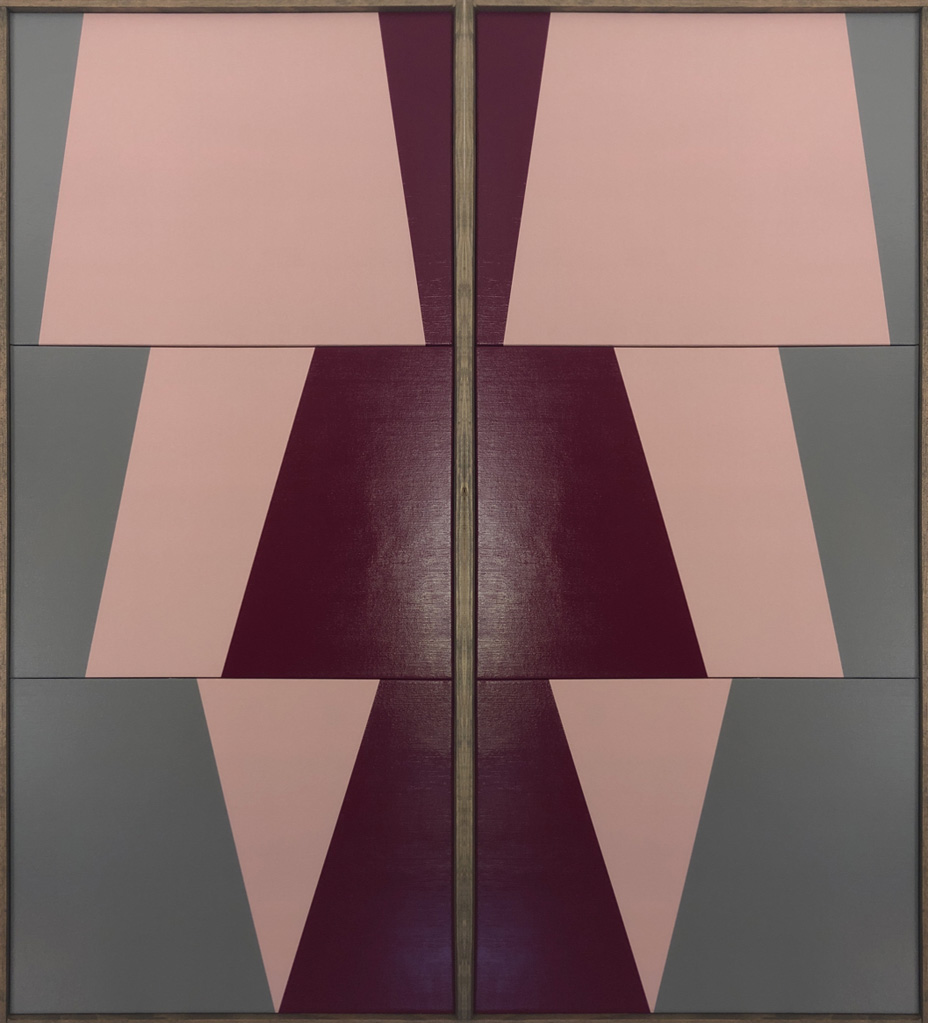