Following a 50 Shades of Grey-themed photo shoot in 2017 — complete with Palen-penned copy “Fifty Shades of Love: A Little Shade Never Hurt Anyone” — the two partnered for an Atomic Blonde-inspired mailing which features Siegal in a black dress (by designer Ulla Johnson), holding a gun (of the toy variety), draped in pearls (inherited from her mother) and wearing oversized diamond-studded sunglasses (vintage Chanel from a Palm Beach shop that she lovingly calls her “Elton John or Elvis Presley glasses”) with the text “Atomic Peggy: Send Ca$h or Bitcoin … Because Hearts Are Overrated.”

“I love Peggy,” Palen tells The Hollywood Reporter, adding that while they were working together on La La Land last year they had lunch at the Four Seasons, where Siegal mentioned she was trying to crank out her annual Valentine’s Day cards. As chief brand officer and a photographer by hobby and by trade (he shot all of the Hunger Games campaign), Palen offered to do it inside the garage of his Hancock Park home, which he converted into a photo studio. “She came over to my house and we had tea and she did her own hair and makeup.”

Meryl Streep Slams Harvey Weinstein for Naming Her in Lawsuit

Siegal asked if he’d be up to give it another go this year, and Palen agreed under one condition. “As long as I can have full creative control,” he says of casting her as a Charlize Theron-style star. Theron played the title character in the David Leitch-directed actioner. “She’s such a force in the industry for so long — she’s like the grand doyenne of awards season.”

Siegal, who has been sending the cards for upward of 10 years, says she’s happy to let Palen handle the creative while she oversees the list of VIPs, and manages to act as “putty” in his creative hands. Previous cards have featured Siegal as a majorette (she was captain of the flag twirlers in high school in 1969 in Fort Lee, New Jersey), on the Golden Globes red carpet, and in Egypt in front of the pyramids. However, its easy to see how Palen’s talents have upped the ante and created a more slick Hearts Day campaign for his leading lady.

“What a team effort to make a few thousand industry friends laugh,” she tells THR. “Since we are knee deep in Oscar campaigns mid-December and do not have the time to send Christmas cards, the timing and spirit of the global day of love, Valentine’s Day, is perfect for a note of affection.”

Despite the grand gesture, Siegal has yet to land a Valentine of her own. “I’m 70 and deliriously single,” she jokes. 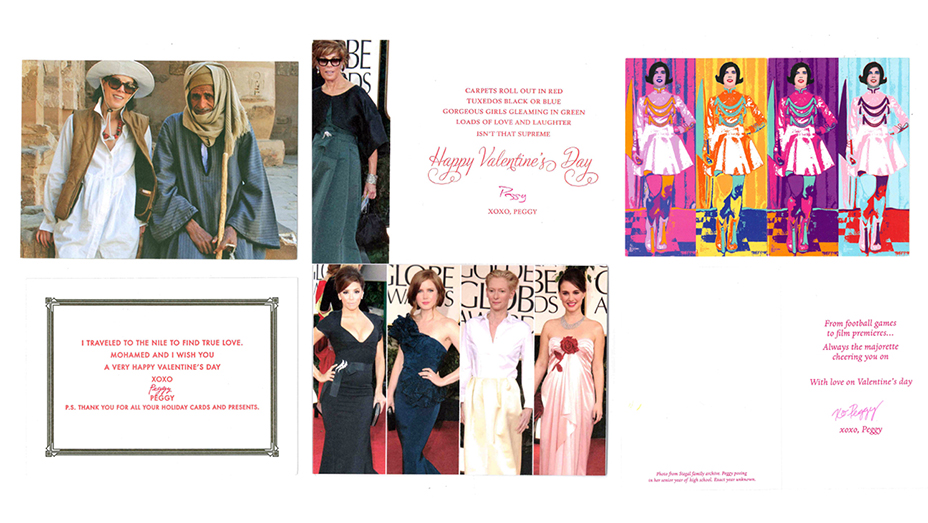 A version of this story first appeared in the Feb. 28 issue of The Hollywood Reporter magazine. To receive the magazine, click here to subscribe.