It’s just not Valentine’s Day without a card from Peggy Siegal. The veteran New York buzzmaker and awards campaign specialist has been mailing V-day greetings to several hundred movie stars, moguls and other industry bigwigs for more than a decade. In recent years, she’s channeled Charlize Theron in Atomic Blonde (“Atomic Peggy” read the 2018 installment which cast Siegel as a gun-toting vixen with bedazzled sunglasses) and Dakota Johnson in 50 Shades of Grey (“A little shade never hurt anyone,” stated the 2017 card).

This year, though, not even Siegal knew what she’d be spoofing until the photo shoot; she’d left all creative decisions to her pal Tim Palen, Lionsgate’s former head of marketing turned producer, who’s been helping design the cards for the past three years. “I managed to keep it a secret until she showed up,” he says.

So who got Siegal’d this year? Damien Chazelle’s First Man, which was retitled First Dame on the card and accompanied with the tagline, “Who doesn’t want to be weightless.” The flip side of the card shows a retro-outfitted Siegal in a skintight silver spacesuit and a bouffant hairdo standing on the moon.

Palen, the creative brains behind the operation, first met Siegal when they both were working on the campaign for Chazelle’s La La Land — Palen served as president of marketing and chief brand officer at Lionsgate while Siegal worked on the awards campaign for the film. 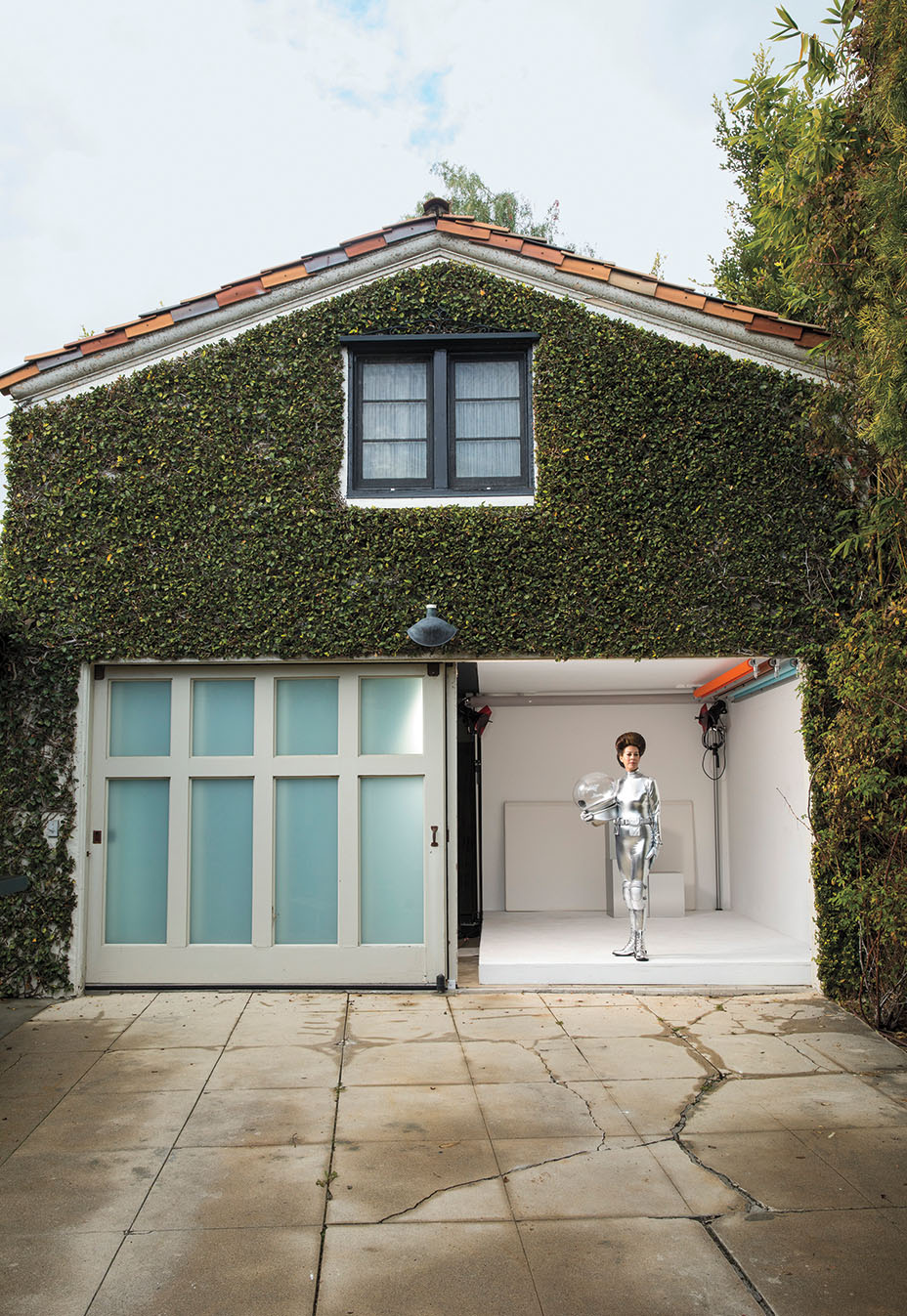 “I came up with the idea and dropped it on her,” Palen tells THR of the gig, which is really a hobby he squeezed in while developing properties through his new Barnyard Projects. “She has always styled herself, and I had this very specific vision in mind and knew that I needed to rent some items. When I asked for her sizes, she called immediately and said she needed to know exactly what I was planning. She was a good sport about it.” He added that having a concept inspired by First Man was “special because it was like having Damien be a part of it by proxy.” The photo shoot, which took place in Palen’s Hancock Park studio adjacent to his home, always includes a break for tea and a quick catch-up. This year’s process took three hours, in part due to the lengthy hairstyling process. In the end, it’s always worth it, Palen confirms. “I personally find her specific brand of style and kookery authentic and 100 percent Peggy. I’ve never met anyone like her.”

Siegal says that everyone on the First Man team received the card, including Chazelle, composer Justin Hurwitz and castmembers like Claire Foy and Ryan Gosling. “Having this card inspired by First Man felt like tipping my helmet to the brilliance of Damien Chazelle, whom I totally adore,” says Siegal, who admits that, at 71, she’s still deliriously single. “I just went to Sundance then to L.A. then back to Sundance, then flew to London, spent a week in Gstaad, Switzerland, then to New York and then to L.A. Would anyone in their right mind want to be married to someone with that schedule? No! Do I enjoy my own company? Yes! I am footloose and fancy-free. I can travel around the world, have a million friends and I only have to discuss it with myself and we all love doing it. Meanwhile, First Man is one of the most important films of this year and the ‘First Dame’ Valentine card was a love note to Damien Chazelle. Thank God he thought it was hilarious or I would have been ‘Last Dame’ in publicity.”

A version of this story first appeared in the Feb. 27 issue of The Hollywood Reporter magazine. To receive the magazine, click here to subscribe.