Continue to The Hollywood Reporter SKIP AD
You will be redirected back to your article in seconds
Skip to main content
By the Associated Press, THR staff
December 23, 2016 5:52am

Speaking during a marathon end-of-year news conference that was televised live (watch below), Putin praised Trump for “keenly” feeling public sentiment to win the election and denied the White House’s claims of Russia’s meddling in the vote.

He said he sees “nothing unusual” in Trump’s pledge to strengthen the U.S. nuclear forces, saying Trump’s controversial tweet is in line with the president-elect’s campaign promises.

In his wide-ranging remarks, the Russian leader claimed that Russia’s military is stronger than any potential aggressor, but acknowledged that the U.S. military is bigger. He also cast the modernization of Russian nuclear arsenals as a necessary response to the U.S. missile defense system.

“It’s not us who have been speeding up the arms race,” Putin said, claiming that Russian military’s nuclear missiles can penetrate any missile defense.

On the U.S. election, Putin described Obama’s accusations of Russian hacking into Democratic leaders’ emails as an attempt to shift the blame for Hillary Clinton’s defeat.

Asked how he responded to Obama’s accusations when he brought them up in their conversation, Putin said he wouldn’t divulge details of a confidential discussion.

Obama Vows Action Against Russia for Hacking: "Mr. Putin Is Well Aware of My Feelings"

He shrugged off Washington’s claims of the hackers’ Russian affiliation, saying they could be based elsewhere. “The most important thing is the substance of the information the hackers have uncovered,” Putin said, adding that the Democrats should have apologized to the Americans over the “manipulations” the emails revealed.

In response to Obama’s comment that “Ronald Reagan would roll over in his grave” upon seeing recent poll results showing that more than one-third of Republicans view Putin favorably, Putin said Reagan would be happy to see his party win.

“It shows that a significant part of the American people have a similar view about the situation in the world and what we need to do, what the common dangers and problems are,” he said.

He hailed Trump for “keenly feeling the public sentiments” to win the vote, adding with a smile that “no one but us expected him to win.” Putin expressed hope that he would meet soon with Trump to discuss how to improve the two countries’ relations.

Trump’s incoming press secretary Sean Spicer said on Friday that Trump’s nukes tweet was in response to Russia, China and other countries talking about expanding their own nuclear capabilities. “The president isn’t saying we’re going to do this,” said Spicer, who appeared on Fox News and NBC’s Today. “He said, ‘unless they come to their senses.’ It’s a warning to them that this president isn’t going to sit idly by.”

Later on Friday, Trump released a “very nice letter” he had received from Putin.

In the note, Putin expressed his holiday wishes and stated that relations between the U.S. and Russia “remain an important factor in ensuring stability and security of the modern world.”

He expressed hopes that Trump, when he takes office, will “take real steps to restore the framework of bilateral cooperation in different areas as well as bring our level of collaboration on the international scene to a qualitatively new level.” He said he hopes Trump will do so by “acting in a constructive and pragmatic manner.”

In a statement about the letter, Trump said of Putin, “His thoughts are so correct.” Adding, “I hope both sides are able to live up to these thoughts, and we do not have to travel an alternate path.”

After his three-hour news conference, Putin told Russian news agencies he would be willing to visit the U.S. if Trump sent him an invitation: “If Trump invites [me] to visit the U.S., I will definitely come.”

On Friday night, Trump again took to Twitter to quote Putin, saying it’s “so true” that Clinton and the Democrats should “be able to lose with dignity.”

Vladimir Putin said today about Hillary and Dems: “In my opinion, it is humiliating. One must be able to lose with dignity.” So true!

See Putin’s letter to Trump in full below. 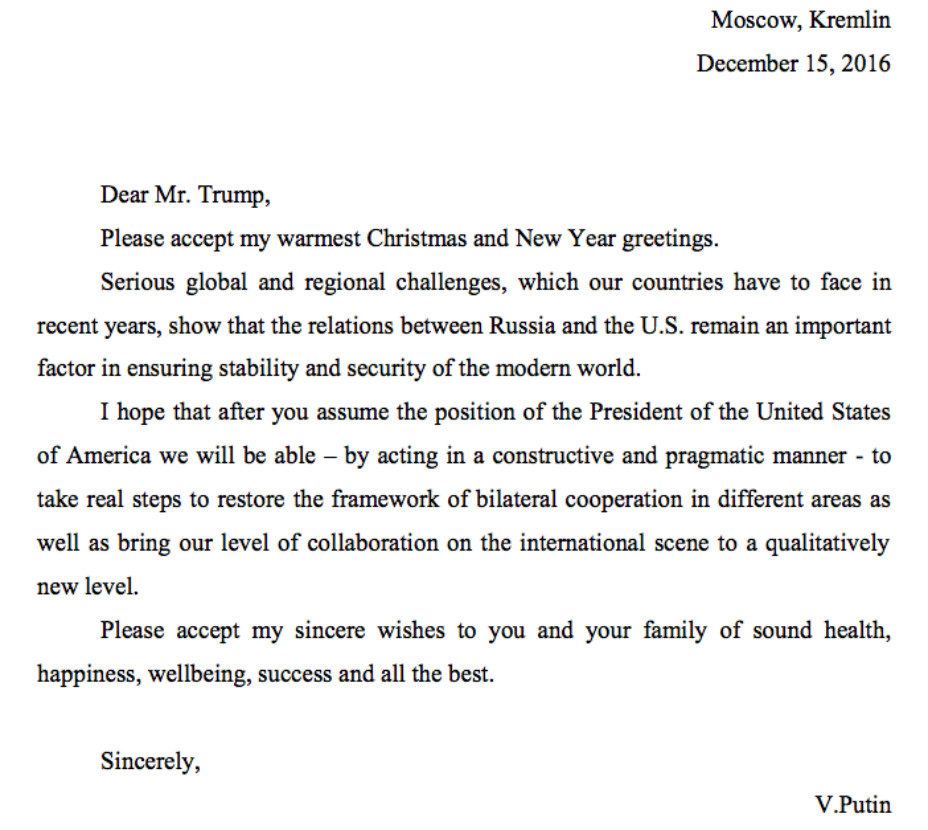