Continue to The Hollywood Reporter SKIP AD
You will be redirected back to your article in seconds
Skip to main content
February 6, 2017 7:28am

“Oh my God, sooo good,” exclaims Rachel Zoe in her distinctive tenor as a lithe blonde model in a gathered white v-neck gown steps out from behind the clothing racks housing the designer’s latest offering. “Heeeaaa-ven,” she sings before turning apologetically back to our interview. “Sorry, multitasking!” 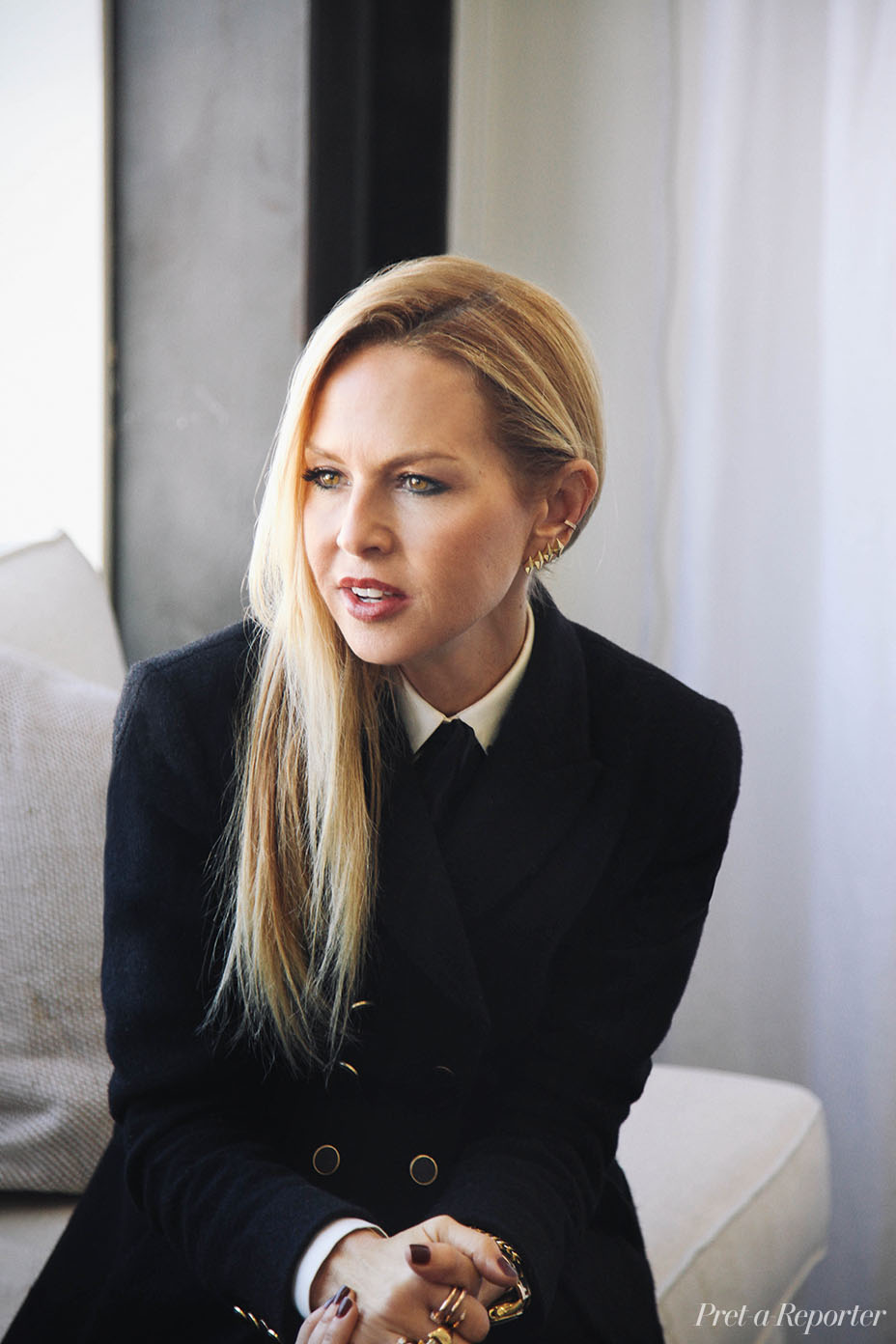 In her Melrose Avenue studio, one floor above The Zoe Report editorial and business offices and one block from Melrose Place, which houses Marc Jacobs, Zimmermann and West Hollywood’s beloved Alfred Coffee, the floor-to-ceiling windows drench the recently redesigned space in daylight. The white walls, charcoal-colored wood floors and metallic and white fur accents make for a perfectly polished, luxe backdrop for Zoe, who herself is buttoned up in a knee-length black coat which is styled over impeccably tailored wide-leg trousers. She is the image of fall, despite the 70-degree L.A. winter weather. 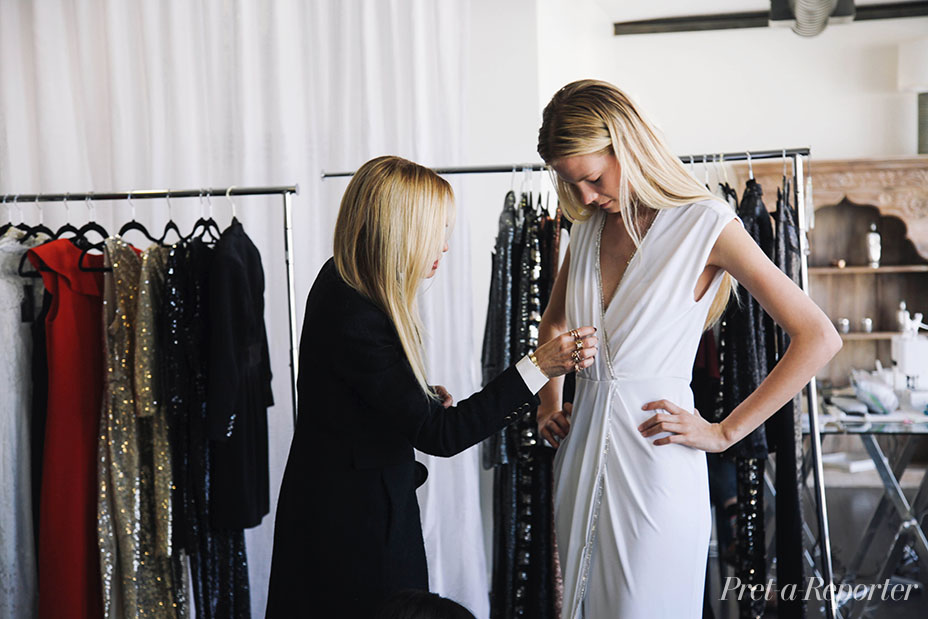 As we discuss her latest collection, Zoe’s team bustles around her pinning, photographing and trying different jewelry and shoes with the looks that Zoe will present the evening of Feb. 6 at an intimate Los Angeles dinner rather than New York Fashion Week, where she has shown on and off for the past six seasons.

She foresees my question before I have the chance to ask. “Why L.A.?” she asks, tucking her straight blonde locks behind an ear adorned with cluster of gold hoops. “I have such a home here and I have such a network here. So many of the women that I dress and cater to are here,” she explains. “Why not own that we live in L.A. and that we design here? Why not own who I am?” 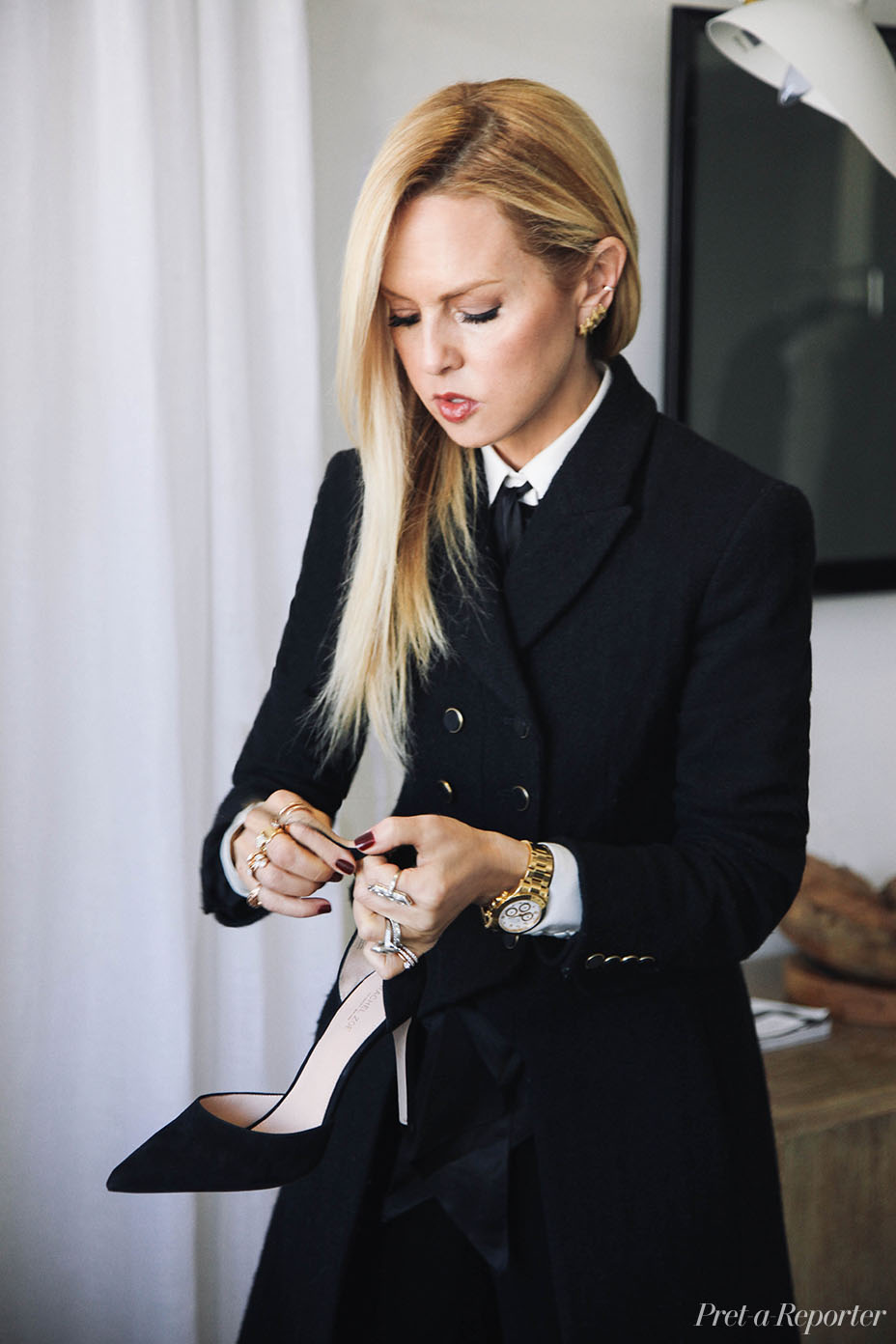 The New Jersey-bred stylist-turned-designer, whose Bravo reality show, The Rachel Zoe Project, made her a household name in a pre-Instagram era when celebrity stylists (mostly) stayed behind-the-scenes, is once again testing the limits of the industry by choosing not only to bypass New York Fashion Week, but by taking the see-now, buy-now trend for a spin.

On Monday, she will show both an eveningwear capsule collection, which will be immediately shoppable exclusively on RachelZoe.com following the show, as well as a handful of evening looks from her fall collection, which will be available on her site as well as her usual retailers (Bloomingdales, Saks Fifth Avenue, Net-a-Porter) in September. Whether or not she will continue an in-season strategy is dependent on the success of this first attempt, she says. 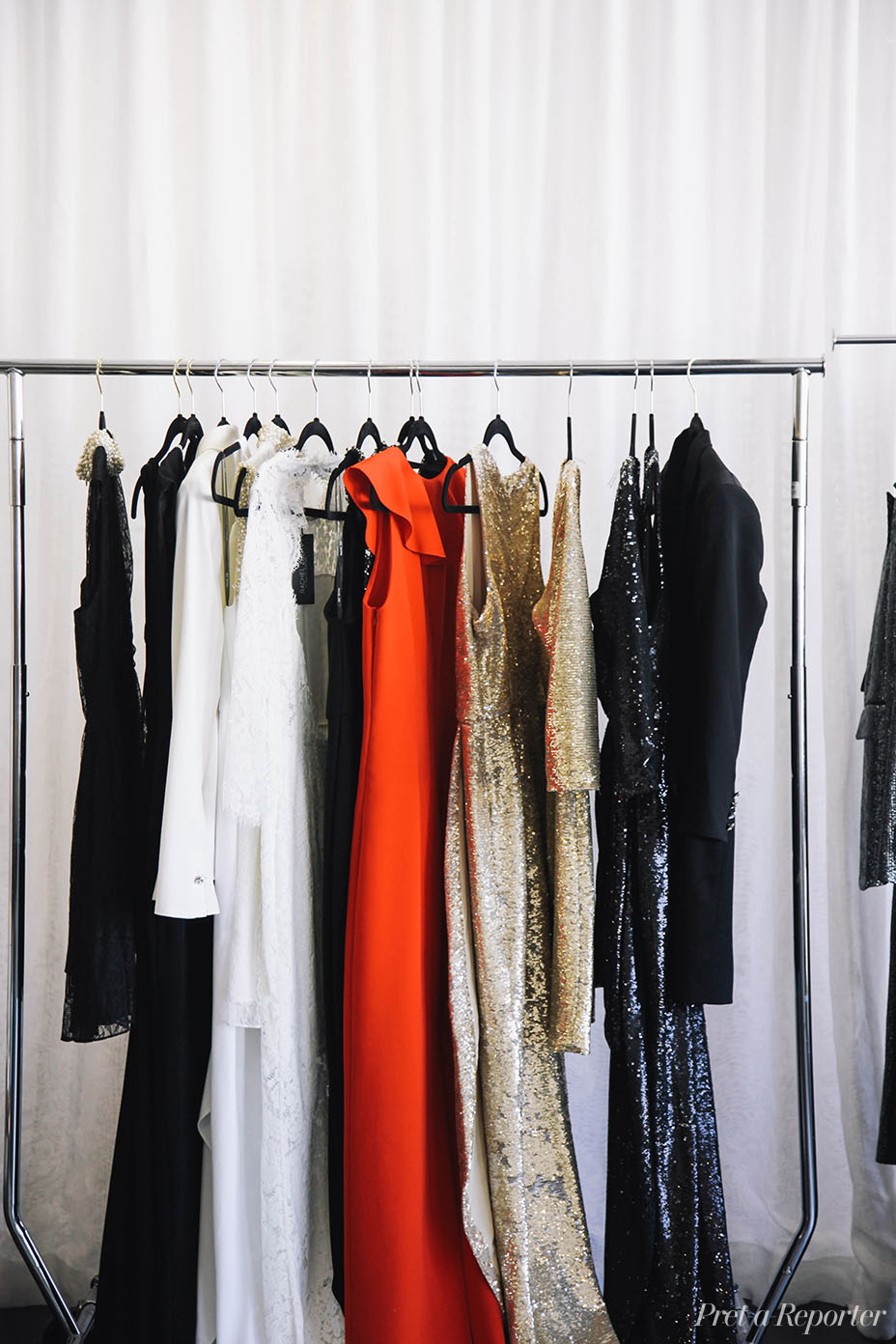 Zoe’s evening-focused collection — which includes a sequined, cold-shoulder rose gold gown with delicately ruffled sleeves, as well as a boho frock done in a leopard print burnout velvet — isn’t breaking new ground sartorially, but it’s exactly what Zoe’s customer has come to expect and love about the designer. “It’s basically like uber glamorous, but there’s an ease about it,” she says, name dropping Sienna Miller, Kate Hudson and Rosie Huntington-Whitely as effortlessly chic women she sees wearing the pieces about town. “There’s nothing too fussy.”

She adds, “I’m just seeing over and over again that my customers are coming to me for dress-up and occasion wear.” The eveningwear focus, Zoe notes, also made sense for the timing of her Los Angeles show. “I felt that this time of year is very Hollywood-centric, so it’s an incredible time to celebrate dressing up and Hollywood glamour.” 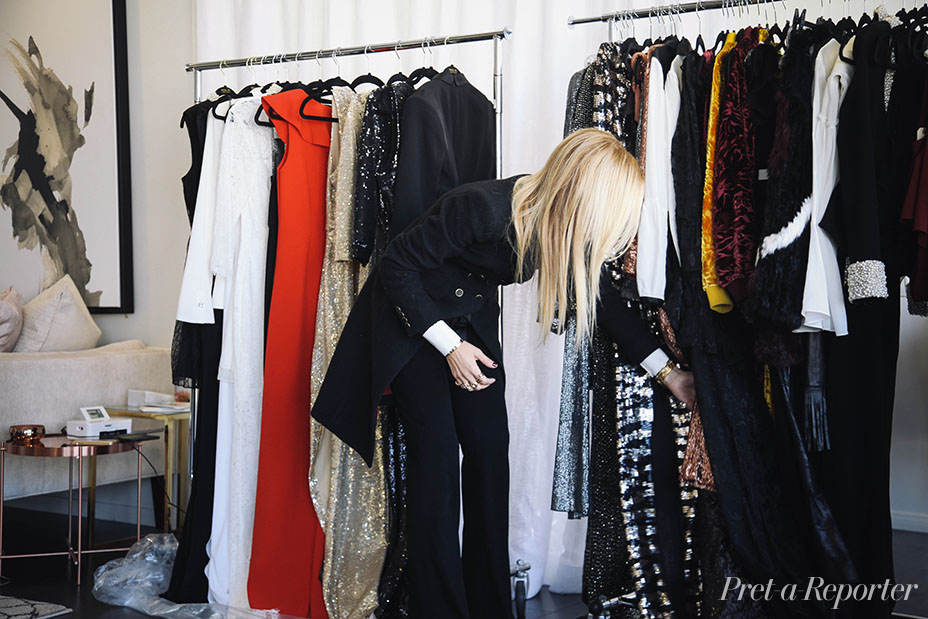 Zoe is one of a growing number of New York Fashion Week defectors — joining the likes of Tommy Hilfiger, Rebecca Minkoff, Rodarte and Proenza Schouler who have traded the Big Apple for either Los Angeles or Paris. However in her eyes, the trend is not so much about the end of the New York fashion scene so much as it is about designers experimenting and feeling out the changing retail landscape.

“I’m not saying I won’t show in New York again,” says Zoe after admitting that she believes New York is and will always be the U.S. fashion capital. “But the rules have changed, and more and more Los Angeles is gaining the respect that I believe it deserves, and the biggest mistake that people can make is to try to make L.A. into New York. It’s never going to be New York, and New York is never going to be L.A. They have their own style and their own flavor.” 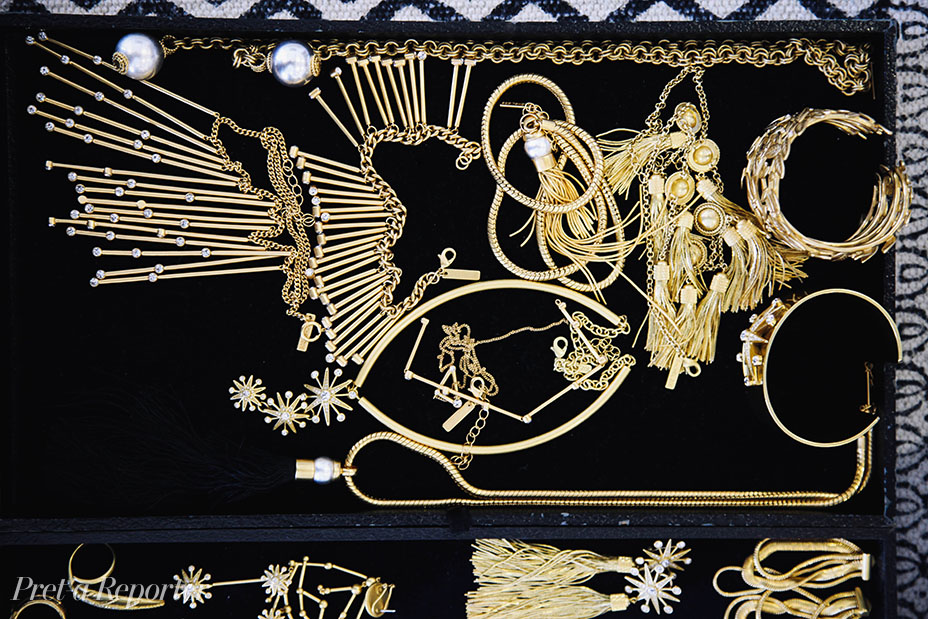 The model returns from behind the racks once more, this time wearing a classic Zoe silhouette: A deep-v tuxedo seamlessly tailored at the waist with billowy trousers that allow only the tip of a pointed-toe stiletto to peek from beneath the hem. “I’m obsessed,” she says of the silver sequined look. She stands for a closer look, her powerful energy commanding the attention of everyone in the room. 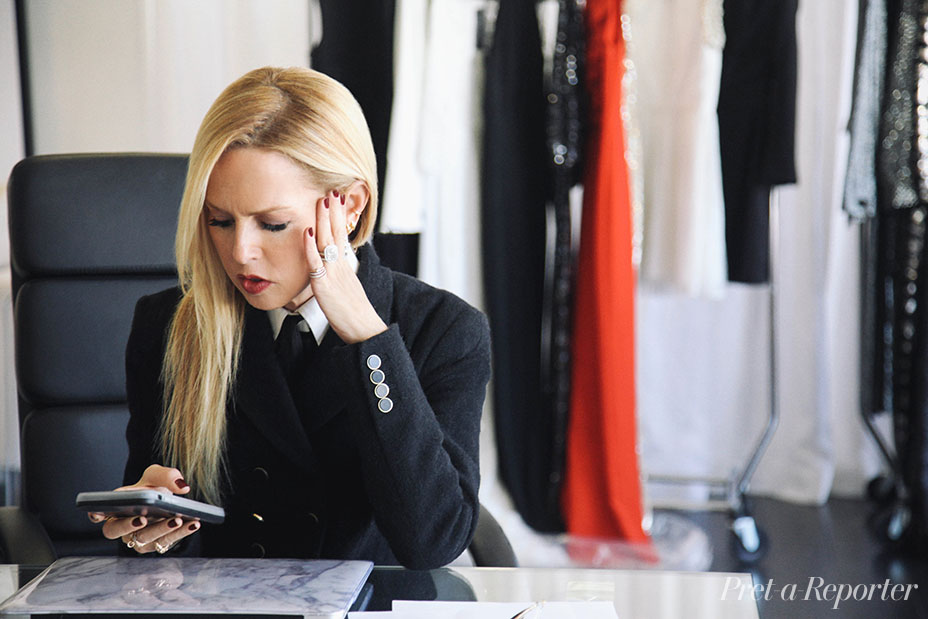 The image of Zoe surrounded by a team of women brings to mind the recent political climate and the intersection of fashion and the feminist cause. When asked about the industry’s responsibility, Zoe — whose brand ethos is “empowering women” and whose in-office nursery for her employees has garnered praise — noted, “All that I do is to empower women to live their life in a better way, treat themselves better, own who they are and feel confident in who they are. I think that the Women’ March and everything that’s going on right now is forcing more people to pay attention to women and really look at who we are and take us that much more seriously.”

She adds, “You know and I know, [women] can do everything men can do and we can probably do it better. Just kidding. (Not kidding.)”