Fashion has been having a bit of an existential crisis as of late, fueled by the struggles at traditional print glossy magazines, flagging department store sales in the face of online shopping, and the rise of fast-fashion retailers offering cheaper trendy alternatives to expensive runway styles.

Recent headlines for stories on the subject have included, “The Death of Clothing” (Bloomberg), “What’s the Meaning of Fashion?” (ManRepeller) and “Fashion Is Dead and There’s No Coming Back” (New York Post).

Even the seasonal runway shows are feeling the burn, with some New York designers fleeing to the Paris catwalks, and other ditching the runway altogether to show in less-expensive formats, such as short films (Monse) and celebrity-studded look book shoots (Rodarte).

But on Wednesday night at New York Fashion Week Men’s, Raf Simons proved that fashion still has something to say about the moment we’re living in and how materialism fits into it, and that a runway presentation can be riveting simply by using clever lighting, staging and grocery store props like empty wine bottles, rolls of salami and bunches of grapes, so long as the clothes are good —and they were.

Made it to #nyfw2018 in time for Raf Simons with a tabletop runway. pic.twitter.com/fcJ44Uuzl6

Between his two seasons at Calvin Klein, and the fall 2018 show he presented for his namesake line at a standing-room-only soundstage in Chelsea on Wednesday night, the Belgian designer-in-New York is becoming a powerful commentator on the fading American dream. This season, with a sleeveless sweatshirt emblazoned with the word “Drugs,” T-shirts and knee-patches screaming “LSD” and “XTC,” he used a fashion show of all things to put a spotlight on America’s opioid crisis. 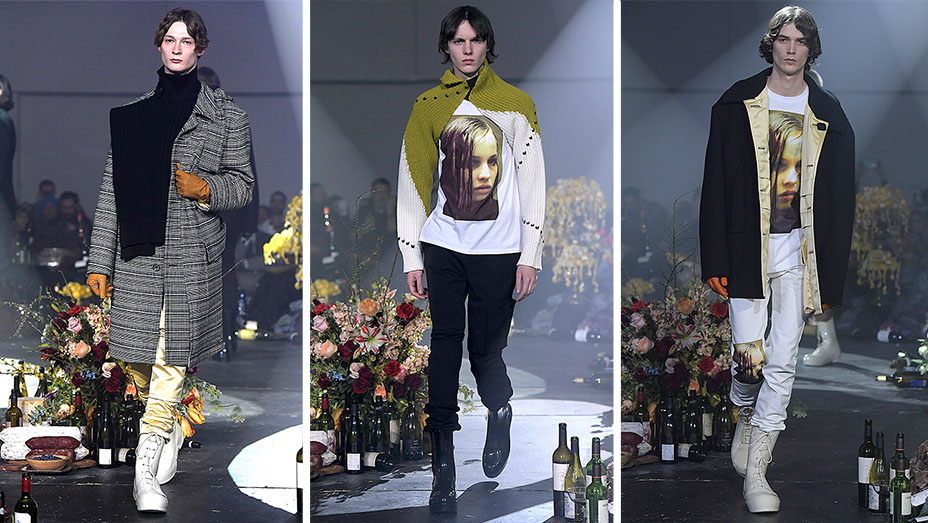 But this wasn’t some in-you-face D.A.R.E. promo; instead, it read as a subtle commentary on haves and have-nots played out on a runway that was decorated like a bacchanal with flowers, fruit and meats piled high at the feet of models in motion under roving strobe lights as the audience huddled around looking on, as if watching the cool kids at an underground club.

The inspiration was another time and place in history when boundaries of class and privilege were starkly drawn: Cold War-era Berlin, as depicted in the 1981 German film Christiane F., which is apparently a cautionary tale about drug use and addiction that was shown to German schoolchildren, kinda like Scared Straight. Simons sampled the imagery of the film’s teenage antiheroes on T-shirts and hoodies, glamorizing the allure of the dark, destructive rebel spirit.

At the same time, in between the shadows, the spotlight shone on his visionary tailoring — hooded coats and oversize boxy blazers in vivid hues of burgundy, pink, gold and green, worn with glossy long gloves and rain galoshes, contrasted with more street utilitarian pants and sweater-sweatshirt mashups, whose brilliant details revealed themselves as the models went in and out of the darkness and light. “I need everything,” fans were commenting on social media even as the 35-minute presentation was still going on.

It’s this kind of high-low clash of clothing and culture that makes Simons a compelling showman (at Calvin Klein last season, he looked to Andy Warhol’s “Death and Disaster” series of photographs to make a point about America’s appetite for destruction) and gives his brands enough entry points to earn fans ranging from A$AP Rocky to Jon Batiste, who on the way out pronounced the show “really good.”

Ultimately, Simons meant “to neither glorify nor condone the culture of drugs,” he wrote in the show notes, but instead “to consider the persistent, almost ubiquitous presence of narcotics within our society.” Part of the proceeds from sales of the “Youth in Motion” collection will be donated to organizations that support those in recovery from addiction.

It was a lot to think about if you wanted to — or simply some pretty dope clothes if you didn’t.