The growl of a motorcycle roaring down Melrose doesn’t disturb the reverence just yards away, where actor Ben Youcef is singing the adhan (the Muslim call to worship) to signal the end of the day’s fast.

It’s June 14, and inside a tent in front of The Larchmont, a restaurant near the Paramount lot, about 50 writers, producers and other industry figures have gathered for prayers before iftar, the evening meal during the Islamic holy month of Ramadan — when Muslims fast from sunrise to sunset — which this year started on May 26 and ends on June 24.

Nearly half of those present are Muslim. “As a Presbyterian in L.A., I’ve been invited to tons of seders,” says Katie Buckland, executive director of the Writers Guild Foundation, which is co-hosting the event with the Muslims on Screen & Television Resource Center (MOST). “Why not an iftar?”

While President Donald Trump fights to push his Muslim travel ban through the courts, many in Hollywood are resisting with a counternarrative to deepen ties and understanding with industry Muslims through fresh portrayals in character (Master of None‘s acclaimed “Religion” episode this season) and in public life (Mahershala Ali’s impassioned SAG Awards acceptance speech).

“There’s been a blowback against the type of draconian opinions that Trump is making about Muslims,” says The Italian Job screenwriter Wayne Powers, whose passion for positive Muslim and Middle Eastern representation began when he taught a screenwriting course in Jordan about five years ago. “It’s caused a bit of self-reflection from writers. If I’m only portraying Muslims as terrorists, that’s feeding the fire of Trumpian diplomacy.” 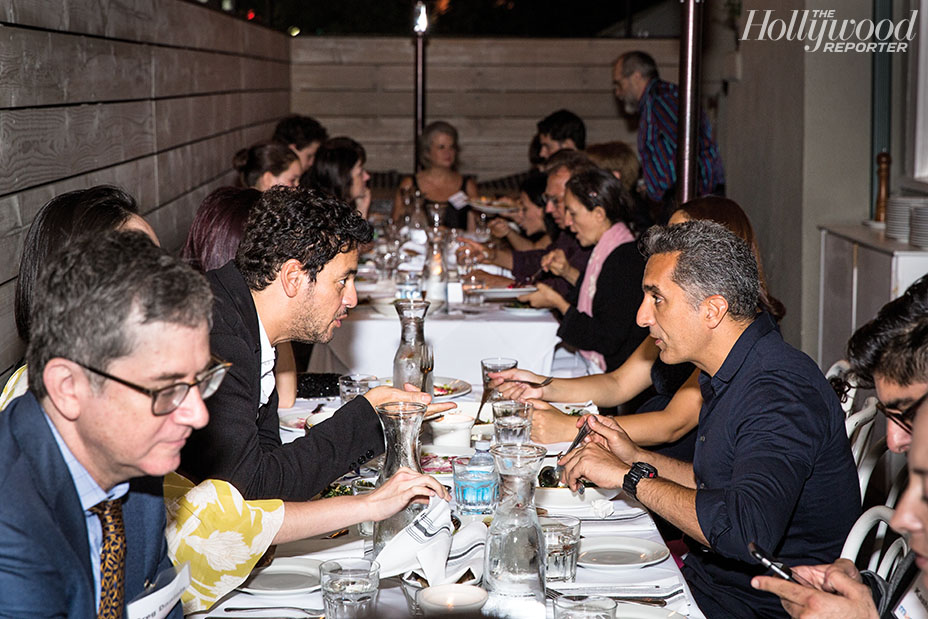 The Larchmont iftar saw Muslim talent including Bassem Youssef — aka “the Jon Stewart of Egypt” — and Tyrant star Kal Naga breaking bread alongside the likes of Designated Survivor co-producer Jenna Richman and comedy showrunner Greg Daniels, whose interest in engaging the culture, as with Powers, was sparked after leading a screenwriting workshop in Abu Dhabi last summer.

“I’ve done a lot of iftars with non-Muslims but never with people in the business,” says Youcef, whose credits include acting in Munich and recording the adhan in films such as 13 Hours and Netflix’s Sand Castle. “This was my first time sharing my faith with Hollywood, which is a good start.”

The hope is that Muslim observances someday become as familiar and commonplace in popular culture as their Jewish and Christian counterparts. “The mainstreaming of the community is still in its infancy,” says Jawaad Abdul Rahman, development director of Unity Productions Foundation, the nonprofit that supports MOST, but integration efforts are growing.

After 20 years in the industry, Hassan is beginning to see an increase in the exploration and understanding of Islam. He still has clients who question the sanity of fasting for an entire month, but “now you get that pass,” he says. “During Ramadan, if I tell them, ‘Hey, I got to go home and take a nap [from hunger-induced fatigue],’ they’re like, ‘OK, good. Need me to wake you up?’ “

Jay-Z Pushes for Projects That Demand Social Justice: "This Is Our Power" (Guest Column)