The song that plays over the final scenes of Crazy Rich Asians had to hit several important notes: It had to strike the right emotional tone for Rachel’s (Constance Wu) departure from Singapore, wistful yet strong; it had to work as an emotional throughline as the film checks in with the other key relationships in the movie — Nick (Henry Golding) and Eleanor (Michelle Yeoh), Astrid (Gemma Chan) and Michael (Pierre Png) — and it had to serve as a thematic closing statement for the film, the first studio product in a quarter century to feature an entirely Westernized Asian cast.

To director Jon M. Chu, the only tune that could fit the bill was Coldplay’s 2000 breakthrough single “Yellow.” Warner Bros. was concerned that the song’s title was problematic (the word has been used as an ethnic slur against Asians), but that’s exactly why Chu wanted it. “We’re going to own that term,” he told The Hollywood Reporter in an outtake from THR’s cover story. “If we’re going to be called yellow, we’re going to make it beautiful.”

Initially, Coldplay turned down the request. Jeff Yang, writing for Quartzy, provides a possible explanation for the rejection: The band had previously been criticized for appropriating Asian culture in their 2012 song “Princess of China” and 2016’s “Hymn for the Weekend,” and perhaps wanted to steer clear of Crazy Rich Asians to be safe.

Chu tried other songs in the key spot — including, according to HuffPost, Rihanna’s “Stay” and Sia tracks — but none struck the right tone. “We tried so many other songs,” he told THR, “but everything was about the love story and not about the bigger context of who we are.”

So the filmmaker wrote directly to Coldplay members Chris Martin, Guy Berryman, Jonny Buckland and Will Champion, laying out his reasons for needing their song, and their song alone, for the film: “[The word ‘yellow’] has always had a negative connotation in my life … until I heard your song.”

“I remember seeing the music video in college for the first time on [MTV’s] TRL,” Chu’s letter continued. “That oner shot with the sun rising was breathtaking for both my filmmaker and music-loving side. It immediately became an anthem for me and my friends and gave us a new sense of pride we never felt before.”

Although Chu can’t say for sure that it was his letter that did the trick, within 24 hours of sending it, the band approved the “Yellow” request. As with several other songs on the Crazy Rich Asians soundtrack, Chu commissioned a Chinese-language cover of the tune — another meta reference to contemporary global identity, remixing culture across continents and generations. The team reached out to young Beijing singer Li Wenqi, who had popularized a Mandarin version, called “Liu Xing,” on China’s edition of The Voice, and when she declined, they found Katherine Ho, a USC freshman who previously competed on season 10 of the U.S. version of The Voice.

Read Chu’s full letter to Coldplay below, then listen to Ho’s Mandarin cover of “Yellow,” from the Crazy Rich Asians soundtrack. 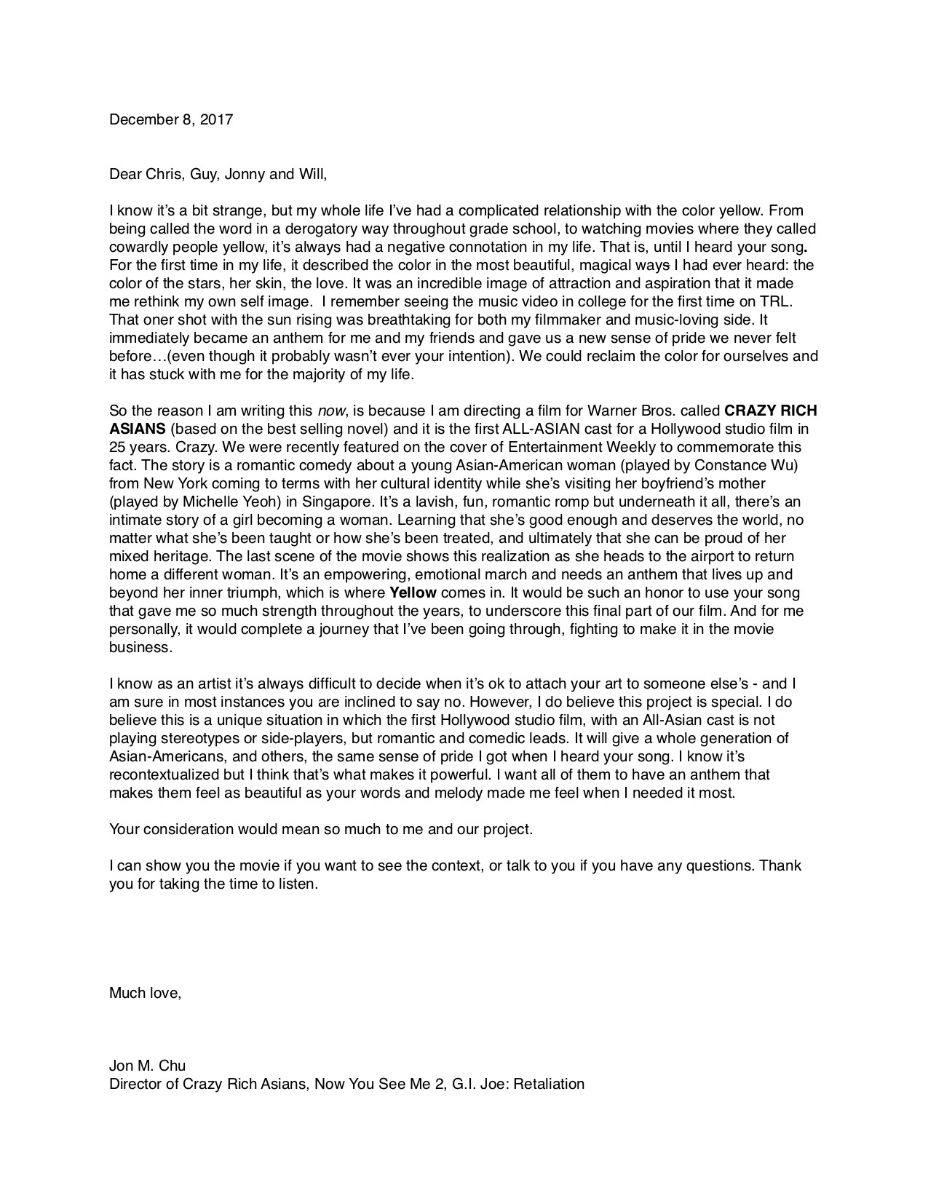