Rebecca Minkoff was looking to draw a crowd with her first runway show in L.A., held Saturday afternoon at the Grove shopping center, and she did so with plenty of girl power — on and off the runway. 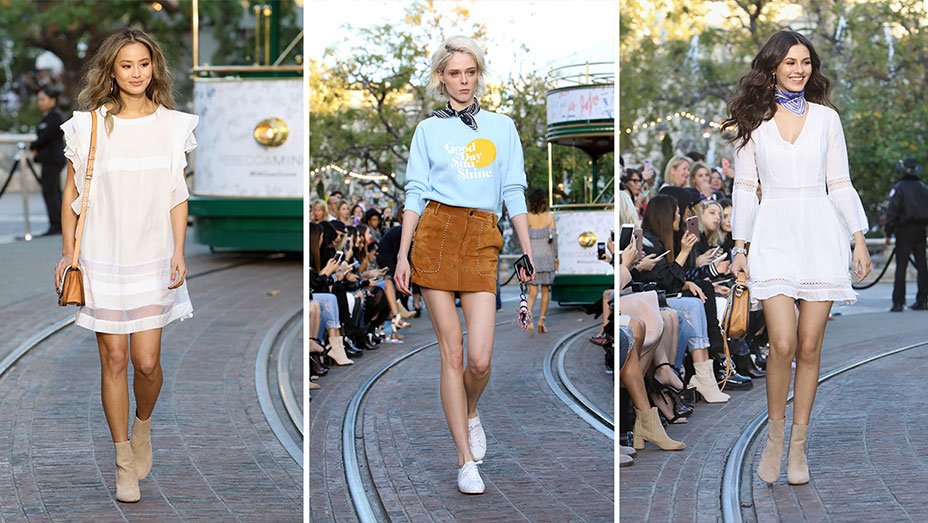 Models rode The Grove’s famous trolley from the depot to the top of the runway in front of the movie theater, parading in front of approximately 200 guests seated outside on white folding chairs. The San Diego-born, New York-based designer’s spring collection, immediately shoppable after the show, was inspired by Southern California women of the ‘70s, according to show notes.

That translated to patchwork “Topanga Canyon-print” dresses, a camel suede jacket paired with white denim overalls, a sky blue jacket with a frayed collar and eyelet details, and plenty of moto jackets. To further emphasize the Golden State’s influence, there were tees and sweaters that read, “California,” with a yellow semicircle graphic reflecting a sunset. 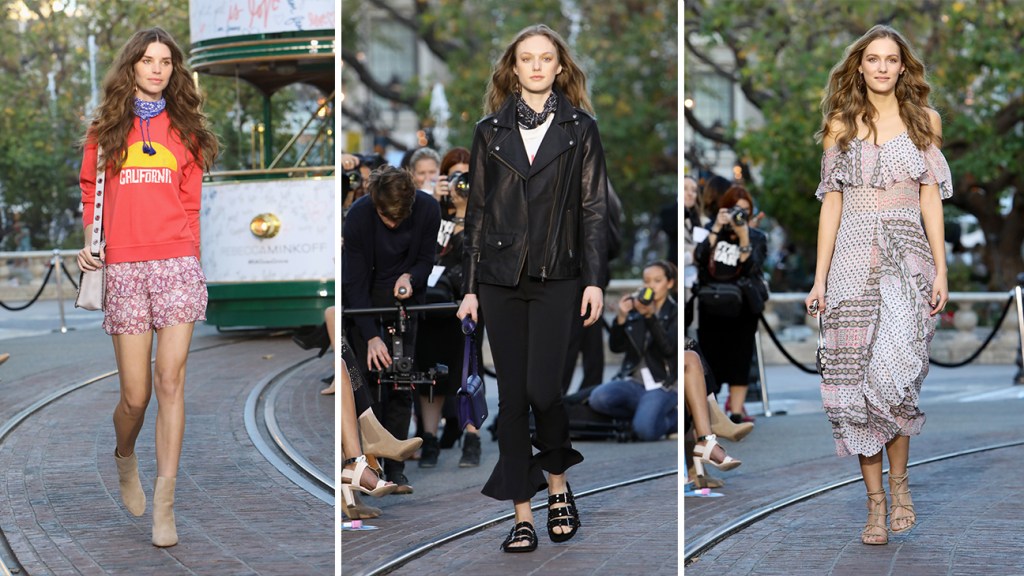 The collection was meant to “celebrate the indomitable strength of women,” according to show notes, which couldn’t come at a more appropriate time, given the recent Women’s Marches around the world.

Minkoff took the opportunity to insert words of empowerment into the range, collaborating with artist Curtis Kulig, known for his “Love Me” artwork, to feature the phrases “The Future Is Female” and “I’m a Woman, Hear Me Roar” on clutches and the MAB bags, which are now available for purchase online and at Minkoff’s pop-up shop at The Grove (open for the month of February). Proceeds from the sales of those bags will go toward I Am That Girl, an organization that helps girls turn self-doubt into self-love.

up close look at @RebeccaMinkoff‘s collab with artist Curtis Kuling on clutches and MAB bags, which will appear on the runway #RMGoesGrove pic.twitter.com/p6AFd1F86D

“I was fortunate enough to partner with [female graffiti artist] gilf! in New York [last season], so I wanted to find someone who just held the symbol for love, and to me, that’s Curtis,” Minkoff explained to The Hollywood Reporter of her decision to partner with the N.Y.-based artist this season. “In my head, I had been thinking, ‘How am I going to add the heart element to this?’ I’m past the point where I’m feeling like fashion is beautiful, and it’s great and that’s why I’m here, but there are much larger issues in the world that matter.”

Though some may argue that fashion has exploited feminism for profit, Minkoff shared, “I think what matters most is using the platform I have to send an empowering message. What hurts us isn’t deciding whether or not we should share a message, but choosing to be safe, rather than brave. I don’t think that hurts feminism, but it’s definitely not about profit, either.” Her show was about “empowering the women around us, not making a political statement,” she noted. “More than anything, as a business owner and the leader of my team, it’s in what we do and how we lead that matters.” 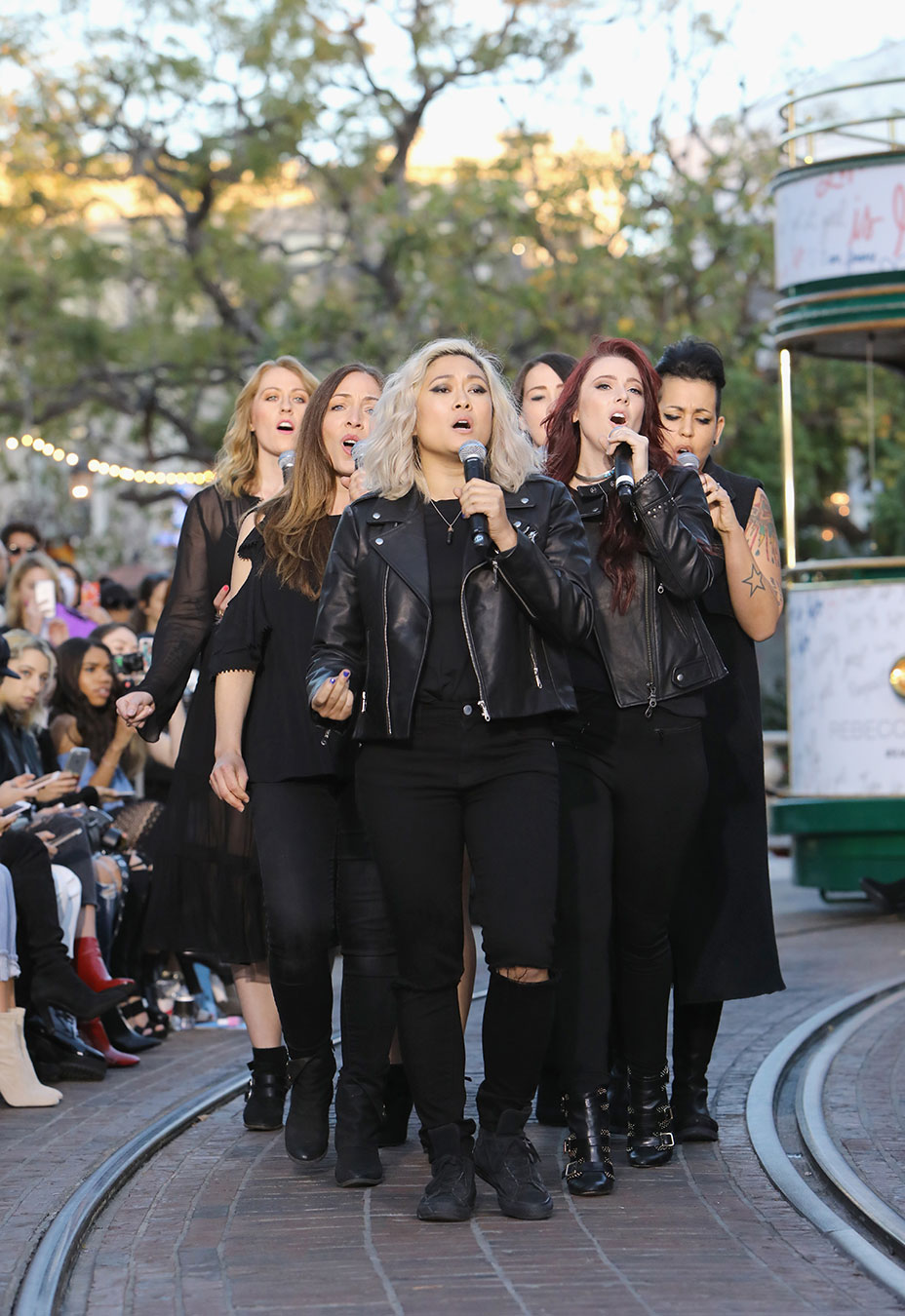 L.A.-based vocalist and songwriter MILCK closed out the presentation, singing her powerful viral anthem “Quiet.” Lauren Conrad, Camila Alves, Emmanuelle Chriqui, Keke Palmer, Erika Christensen, Jessica Stam, stylists Ilaria Urbinati and Johnny Wujek and more watched from the front row. The public — those who found themselves already hanging out at the outdoor shopping center — got a chance to watch from the sidelines, too.

As previously reported, the designer kicked off the day with a bevy of events, including a yoga session with Jeannette Ogden and Zella Athleisure; a fireside chat between Minkoff and Who What Wear’s Hillary Kerr; and wine-tasting with Chandon winemaker Pauline Lhote. Conrad was on the scene with her pop-up shop for The Little Market at the park (with fans waiting in a long line to meet the reality star turned designer), and Keke Palmer held a book signing of I Don’t Belong to You: Quiet the Noise and Find Your Voice at Barnes & Noble.

The fashion event is the first of several being held in Los Angeles in the next few days as a counterpoint to New York Fashion Week. Minkoff’s approach is unique, as it is consumer-facing, presenting a collection that is immediately available, rather than previewing one for industry insiders that won’t be available for six months. Designers Rachel Zoe, Rachel Comey and Tommy Hilfiger also will hold runway shows here in the next few days that similarly challenge fashion’s status quo. 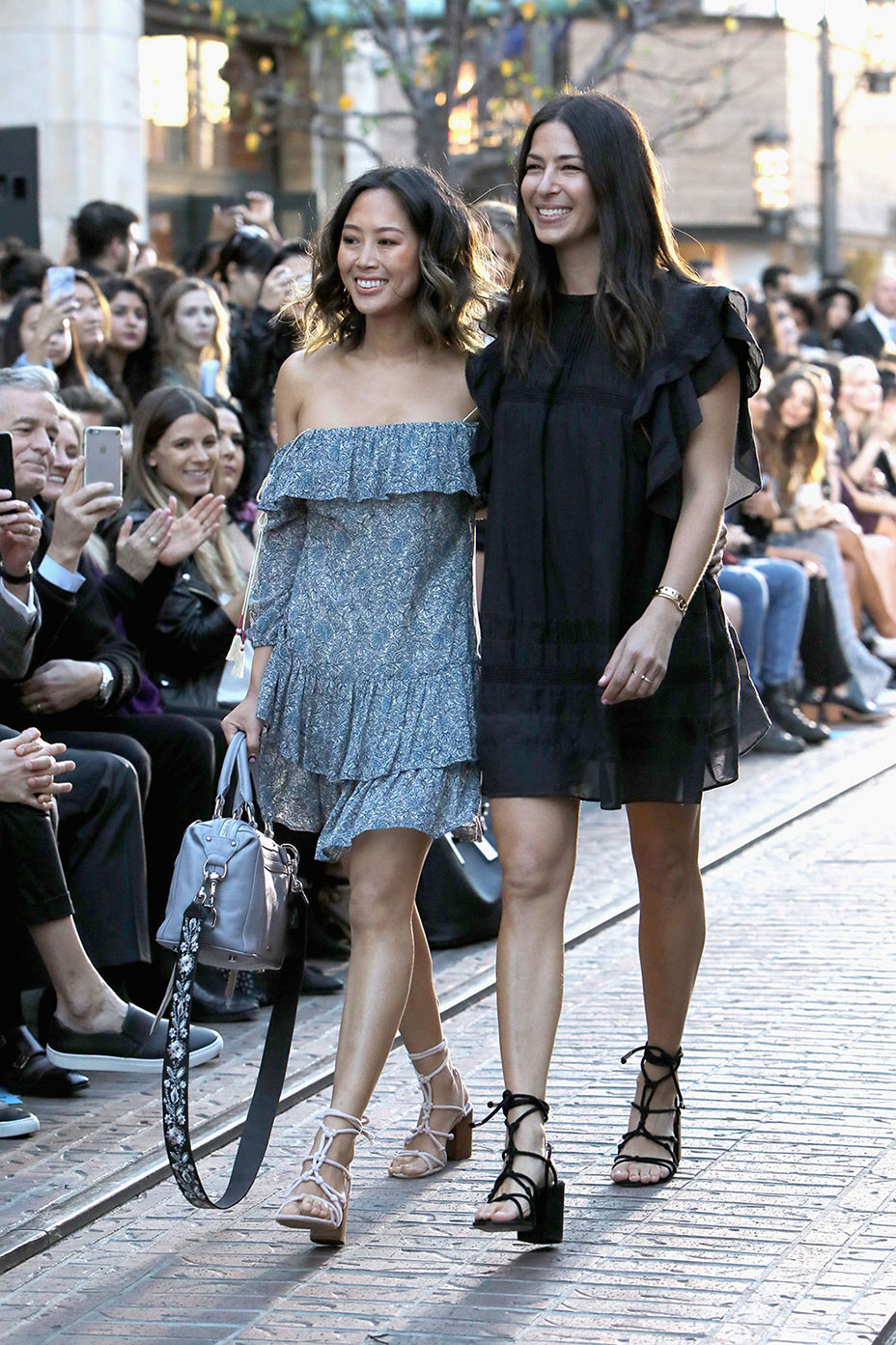 Overall, Minkoff believes that the most important thing we can do is “champion each other,” said the designer, who was most recently honored on the first-ever Create & Cultivate 100 list, which recognizes female leaders in their respective industries. “Our support for each other should never waiver because of the political climate. It should be fiercely strong and consistent, always.”

Samantha Reed contributed to this report.