Isn’t it Romantic is an “anti-romantic comedy,” said star and executive producer Rebel Wilson, for the way it pokes fun at rom-com tropes and gives the power back to women.

The Warner Bros. film centers on New York architect Natalie (Wilson) who hits her head and wakes up in an alternate world. Natalie finds herself in the center of a cheesy rom-com universe like the ones her cynical character mocks. Liam Hemsworth plays the “beguiling” billionaire Blake, who somehow falls for her, while Natalie’s bestie, Josh (Adam Devine), captures the attention of yoga ambassador Isabella (Priyanka Chopra) — before they start to realize maybe the “perfect” people aren’t so perfect for them.

“It was a romantic comedy, but also an anti-romantic comedy at the same time, and it makes fun of all the cliches of romantic comedies of the past,” Wilson told The Hollywood Reporter at Monday’s premiere at the Ace Hotel in downtown Los Angeles. “I love that they were offering me the lead role, because normally a girl like me is marginalized to be the funny friend or the sidekick.”

Writer Erin Cardillo said she wrote the part for a “normal” girl and wasn’t involved in the casting. “In the past, a lot of rom-com heroines were supermodels. They would take their glasses off and everyone was like ‘Oh my God, you’re beautiful.’ And Rebel is beautiful. She represents being a normal woman,” Cardillo told THR.

Director Todd Strauss-Schulson agreed that Isn’t it Romantic has “nothing” to do with the size of the main character or actress. “It was conscious to not make that her problem.… It didn’t seem helpful or part of the story we were trying to tell,” Strauss-Schulson told THR. Instead, it’s about correcting the “unhelpful” idea that someone is not a “whole person” until someone loves them, he said. 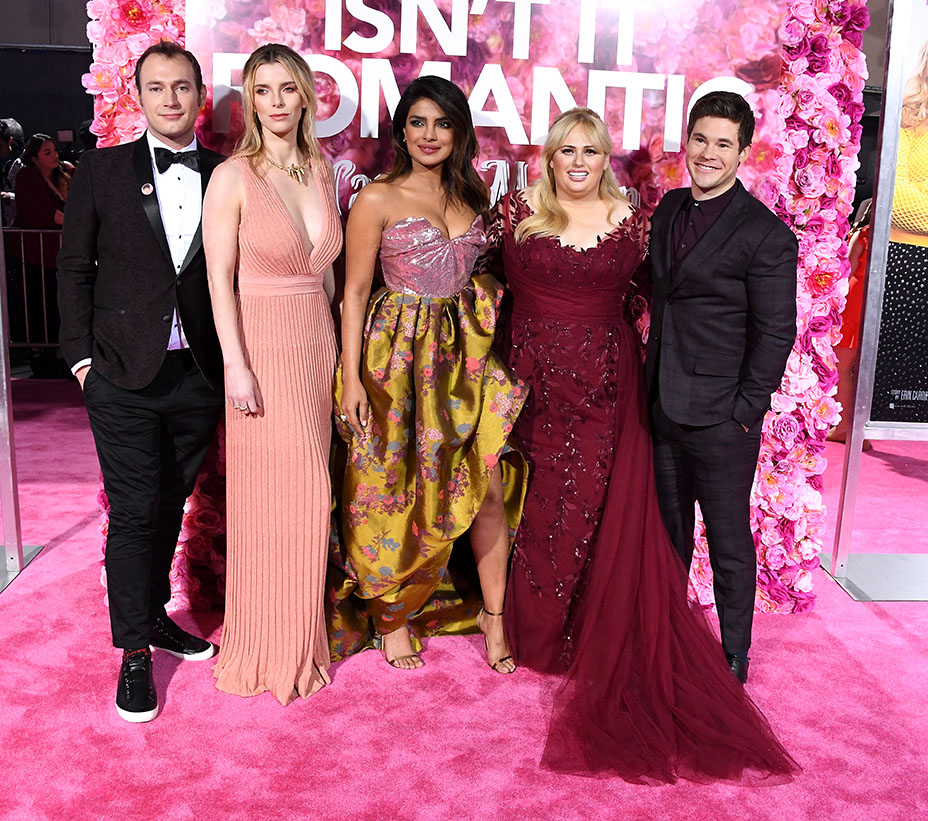 Chopra explained why it was important for her to be a part of a film that redefines a traditional rom-com. “First of all, it’s produced by a woman, Rebel Wilson, who I admire tremendously, and second of all, as a female actor in Hollywood as well, I love that it’s her first leading part,” Chopra told THR. “She is making the movie of her dreams, as an entrepreneur as well, and there was no world in which I wouldn’t have supported that.”

Chopra added, “I really wanted to be there cheering for her.” They became so close that Wilson said the pair would be on set “talking about other men and having lots of interesting chats about our love lives together” before Chopra dated Nick Jonas, now her husband, who attended the premiere by her side. 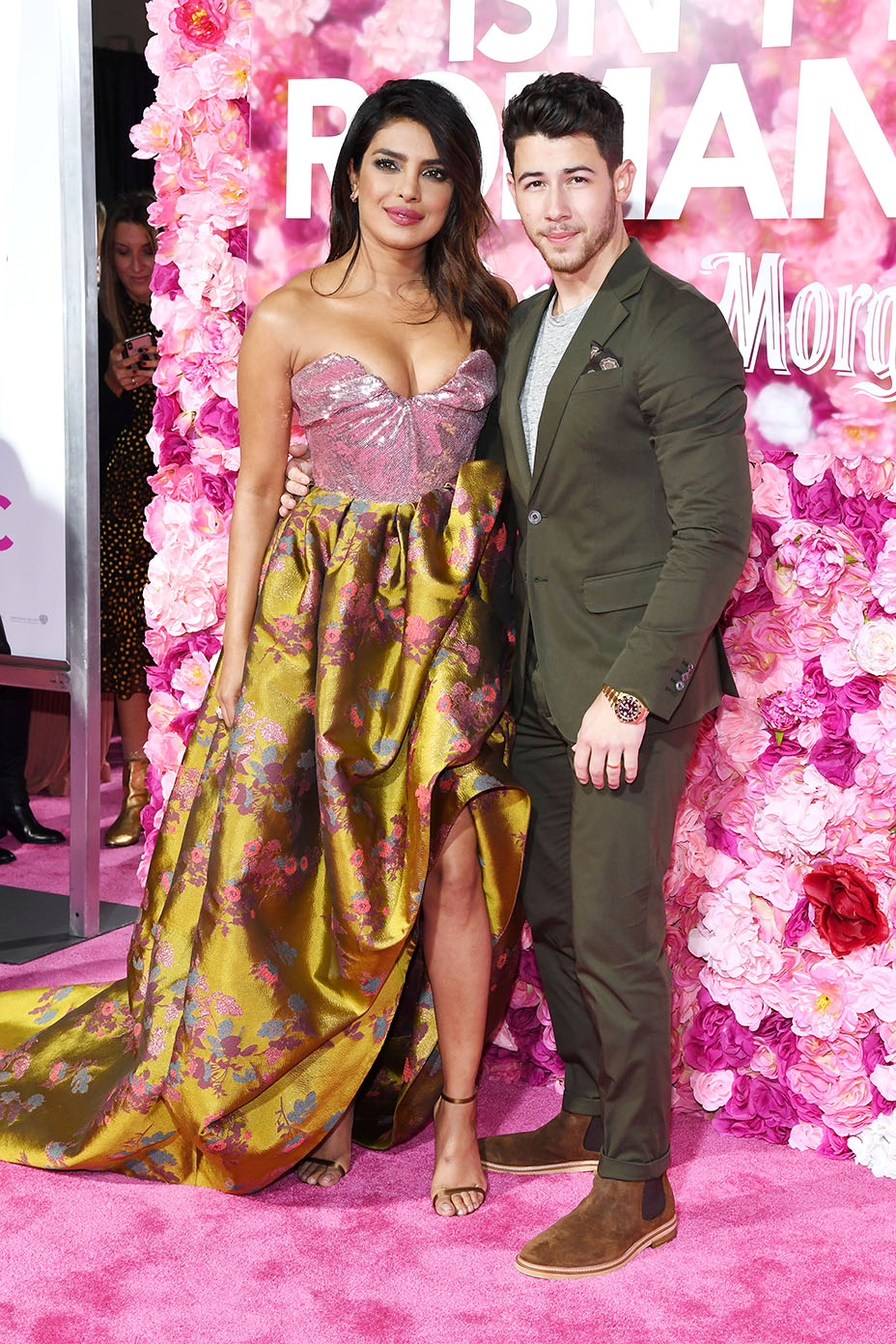 The power given to female characters was a reason Betty Gilpin got on board as Natalie’s coworker Whitney. She told THR that Isn’t it Romantic is a “perfect bridge” of honoring the whimsy of the genre and moving into a time “where the female characters have just as much agency as the male characters. Their purpose in life isn’t to be swept off their feet.”

She said she valued her experience interacting with Wilson as a producer due to her own “internalized shame” as a woman in the workplace. “I have found it very hard, so I have tried to watch women who are outwardly stronger than me and see how they are at work. Watching Rebel at work was a very helpful lesson for me. I also feel that working with Alison Brie on GLOW,” Gilpin said.

'The Hustle' Trailer: Rebel Wilson and Anne Hathaway Show Off Their Scam Artistry

Wilson’s Pitch Perfect co-star Devine also raved about her producer role: “It was cool working with Rebel as a producer, because now that she was the boss, she had the flex to go, ‘No, we’re going to improv a little longer here,’ when on the Pitch Perfect movies, we didn’t have that power,” he told THR.

“I’ve kind of got the bug for it now,” Wilson confesses of producing (she’s producing The Hustle, which she stars in with Anne Hathaway, next).

Fellow Barden Bellas attended the premiere to cheer on Wilson, including Anna Camp, Chrissie Fit and Ester Dean, who huddled with Wilson at the after party at the NoMad Hotel downtown for a private chat. Miley Cyrus stopped by the premiere in a billowing red gown on behalf of Hemsworth, her new husband, who is “dealing with some pretty annoying health stuff,” he wrote on Instagram. And Crazy Rich Asians actress Constance Wu came to support the director; “She’s the queen of romantic comedies now, and she wanted to support this one,” Strauss-Schulson told THR.

Stars mingled while trying the chocolate fountain, raw seafood buffet (a nod to crabs mentioned on screen) and risotto scraped from a Parmesan wheel. The bar offered the Heart Breaker (a vanilla-strawberry concoction with rum, sherry and aperol), the Lovestruck (a Hemingway cocktail with rum and grapefruit) and Love on the Rocks (Captain Morgan private stock, blended scotch, cachaca, coconut water and bitters). 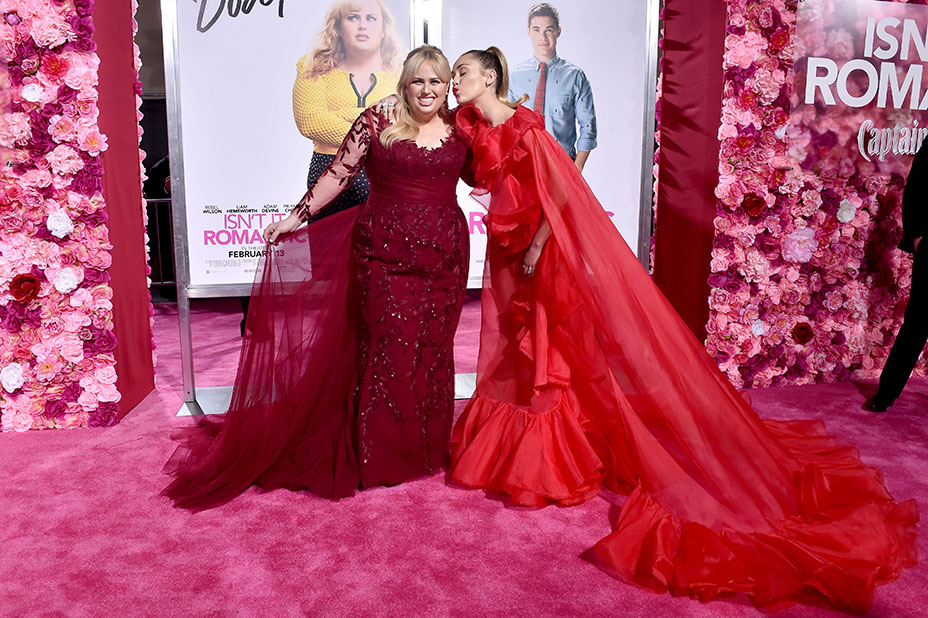