While researching what Benedict Canyon looked like in 1969, Quentin Tarantino stumbled upon a documentary created by Scott Michaels, who owns and runs a Los Angeles-based guided tour company called Dearly Departed Tours. On his company’s menu is a four-hour tour called “Helter Skelter” that focuses on the Manson Family murders. It has turned Michaels into an unofficial expert on the subject.

“I took Tarantino around,” says Michaels, who earned a ‘special thanks’ credit on the film, Once Upon a Time in Hollywood, which opens this weekend.

His Helter Skelter tour — which spans over 40 miles with stops at El Coyote, Laurel Canyon, various spots along the Sunset Strip and, of course, the Cielo Drive house — is one of his most popular. “[Quentin] saw my documentary and reached out, and we met and talked a lot about the case. I took him and a few others on a tour of the locations, and he and I were in touch afterward — trading nerdy facts about the crime scene and the furnishings,” says Michaels.

Like much of Los Angeles, Benedict Canyon — and, more specifically, the house at 10050 Cielo Drive — gets a sizable chunk of screen time in Once Upon a Time. It’s hardly a spoiler to mention that Leonardo DiCaprio’s character, the fictional actor Rick Dalton, lives next door to nonfictional actress Sharon Tate, played in the film by Margot Robbie. Aug. 9 will mark the 50th anniversary of the brutal murders of Tate and four others — hairstylist Jay Sebring, coffee heiress Abigail Folger, screenwriter Wojciech Frykowski and Steven Parent — at the hands of Charles Manson acolytes. All five were butchered at the Cielo Drive home.

Several scenes in Once Upon a Time take place in the driveway, where Dalton, Tate and her then-husband, Roman Polanski (played by Rafal Zawierucha), pass by each other. Tarantino also spends a decent amount of time inside the house that Tate and Polanski were renting from its real-life owner — a former Hollywood business manager named Rudolph Altobelli.

That Tarantino sought expert input about Cielo Drive makes sense. The Tate House, which was originally designed by architect Robert Byrd and built in 1941 at the end of a winding cul-de-sac, no longer exists. It was razed in 1994 and the address was changed from 10050 Cielo Drive to 10066 in an effort by the property’s then-owner, real estate investor Alvin Weintraub, to exorcise its nightmarish history. Where there was once a quaint, French Normandy-styled, 3,200-square-foot home, which boasted a string of celebrity occupants that included Cary Grant, Terry Melcher (son of actress Doris Day) and Candice Bergen (not to mention Nine Inch Nails frontman Trent Reznor, in a bizarre coda), now stands an 18,000-square-foot Mediterranean-style mansion with 13 bathrooms, a screening room and a wine cellar. The only tether that binds the old house and the new one is the property’s stunning 180-degree view. 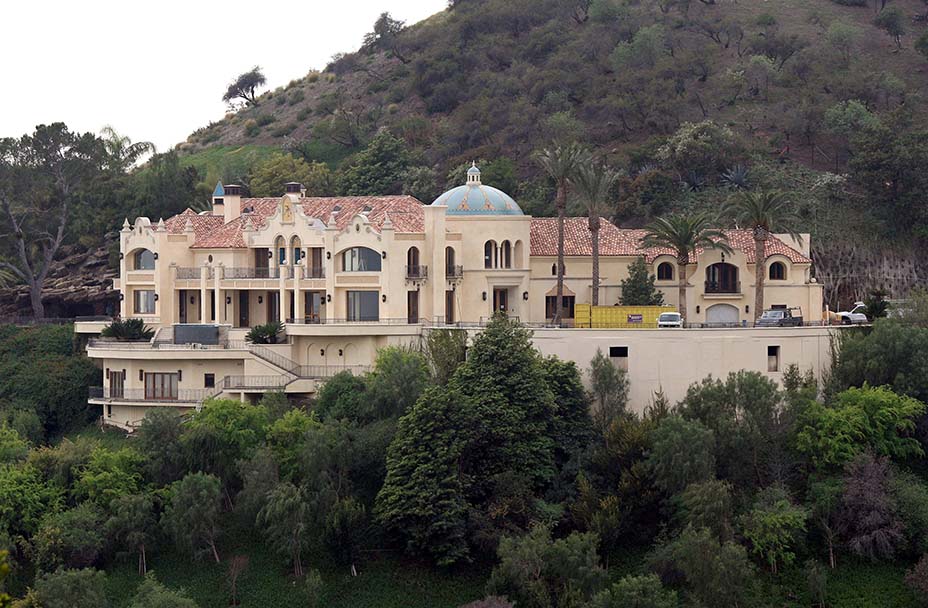 Johanna Falduto is a broker for the Westside Estate Agency. But in 1988 she represented investor John Prell, who purchased the home for $1.6 million from Altobelli and then sold it two years later to Weintraub. “We bought it from Rudy, who had been residing in it after the scandal took place. I spent a lot of time in there, but I wasn’t spooked because in our profession we’re in all sorts of homes that have morbid stories,” Falduto recalls.

But Falduto also recalls that not everyone was as unfazed as she was by the property’s past. “I remember I was there for a Sunday open house and Jay Leno came in. Jay was looking for a house for his parents. But when I told him that this was where the Manson murders occurred, he had zero interest in the house,” she says. “There was a stigma for people who weren’t developers because developers weren’t planning on living there. Others were standoffish because the thought of living in that original site just wasn’t appealing.”

The home’s current owner is writer-producer Jeff Franklin, best known for creating Full House. Franklin purchased the home back in 2000. Last year, Franklin was removed as the showrunner of Netflix’s Fuller House due to inappropriate behavior, according to reports. The online real estate clearinghouse Redfin estimates that the home’s current value is slightly above $20 million.

According to Michaels, Tarantino used three different locations to shoot the Cielo Drive scenes for the film. For the driveway shots, he used a location in Universal City.

Having caught an early screening of the film, The Hollywood Reporter asked Michaels to give his marks on the film’s depiction of the real Cielo Drive: “I’m a nerd about it and I know exactly what it looked like. But I thought it was a decent representation considering that it’s the movies,” he said. “As far as the driveway scenes go — it looked completely different (from the real thing). But they did a decent job of making the exterior of the house look similar. The interiors of the Tate house, though, were perfect — the details were absolutely perfect.”