In a sea of approximately 2,000 participants and volunteers at Sunday’s Walk to Defeat ALS, Team Nanci members were easy to locate.

Gathered in clusters near the VIP tent at the walk’s starting location — Exposition Park in downtown Los Angeles near the USC campus — one could spot the famous faces, high-profile agents and managers and more than a handful of power publicists who all turned out for veteran publicist and BWR Public Relations co-founder Nanci Ryder. Every last supporter of Ryder, making her third appearance at the Walk since being diagnosed with ALS in 2014, sported a rose-colored T-shirt topped with capital letters spelling out “Team Nanci.” Or rather, like this: “TEAM NANCI.” 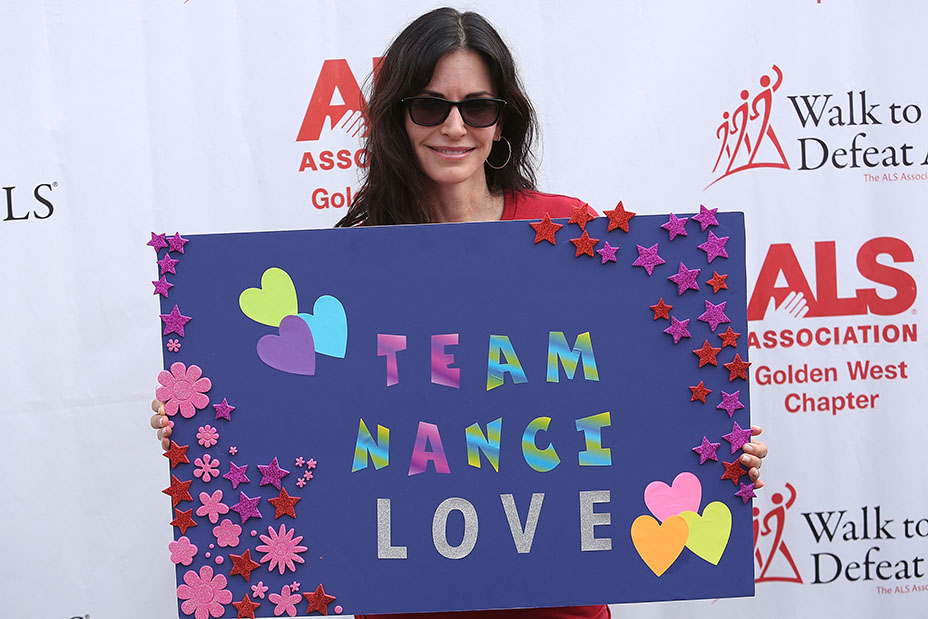 Their boldness proved to be more than a fashion statement, something evidenced by that VIP tent, which happened to be a bonus treat awarded to the team that raised the most amount of money for the organization. (Inside, coffee, pastries and cookies got walkers energized for the start.) This year, at the 15th annual L.A. County Walk hosted by the ALS Association Golden West Chapter, Team Nanci came out on top again with a whopping $128,883 raised as of press time on Monday afternoon. (By comparison, the closest team came in with $26,000.)

But this isn’t a competition — it’s a race for a cure to help the thousands living with ALS, or amyotrophic lateral sclerosis, commonly referred to as Lou Gehrig’s disease. Many Team Nanci attendees were quick to point out that their presence at the Sunday morning walk was simply to show Ryder how much they love and support her, and to show the world how their hope aligns with hers in finding a treatment for the progressive, and always fatal, neurodegenerative disease.

According to the ALS Association, approximately 6,000 people are diagnosed with the disease each year. Life expectancy ranges from two to five years, though some people are known to live longer, even if the quality of life is questionable. People with ALS lose the ability to move, speak, swallow and, eventually, to breathe, while their senses and awareness remain in tact. There is no known cure, which makes fundraising and research that much more important, a fact Ryder’s friends know well.

“Like so many people out here today, I’m looking to follow the puzzle pieces that are coming together until there’s a cure ultimately,” said Renee Zellweger, Ryder’s longtime friend and former client. “Each little bit of new information brings a little more hope. There’s a lot of research that is going on, even internationally, and with all the funds that are raised, it’s still so elusive.”

Zellweger said what isn’t slippery is her determination to stand up for Ryder and be a voice, along with all of her friends, to garner attention and funds as they look forward to new research and clinical trials. Zellweger joined Reese Witherspoon, Courteney Cox and Jennifer Garner in rallying Team Nanci members, of which there were close to 100 strong. Ryder herself looked pleased with the turnout, greeting friends from a wheelchair, her newest accessory, and posing for photographs on the park lawn. (One of her favorite pals also roamed around — a Golden Retriever named Jack Maffei, the dog belonging to close friends and Team Nanci stalwarts Tom and Kathy Maffei, who also were there.)

Jay Schwartz, who started his career alongside Ryder at her namesake firm several decades ago before joining her at BWR, cut the ribbon to signal the start of the walk. Minutes before, he told The Hollywood Reporter that it’s “extremely rare” in Hollywood to see so many people support a peer, especially one from a competing company. “It’s a testament to who Nanci is,” he said. “Everybody is here. Look at this turnout, and look at the money she raised. It’s humbling … it’s really a great feeling.” 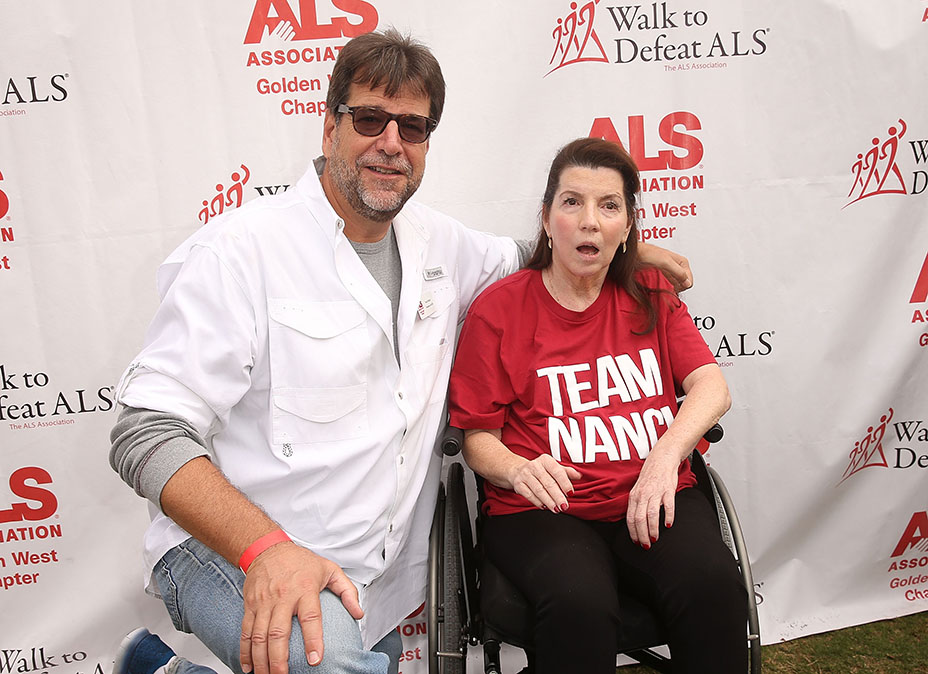 Also feeling good was Fred Fisher, president of ALS Association Golden West chapter. “This is heading towards one of our biggest walks ever,” he said. “The money that we are raising here today is powering the search for an effective treatment and cure and supporting families that are living with the disease.”

Fisher singled out Ryder for her ability to rally support. “Nanci Ryder is an extraordinary advocate for ALS. She has really turned her own personal challenge into a cause and has done what we need people to do, which is rally her friends and colleagues in support for the search for a treatment for her and for the thousands and thousands living with this disease,” he said. 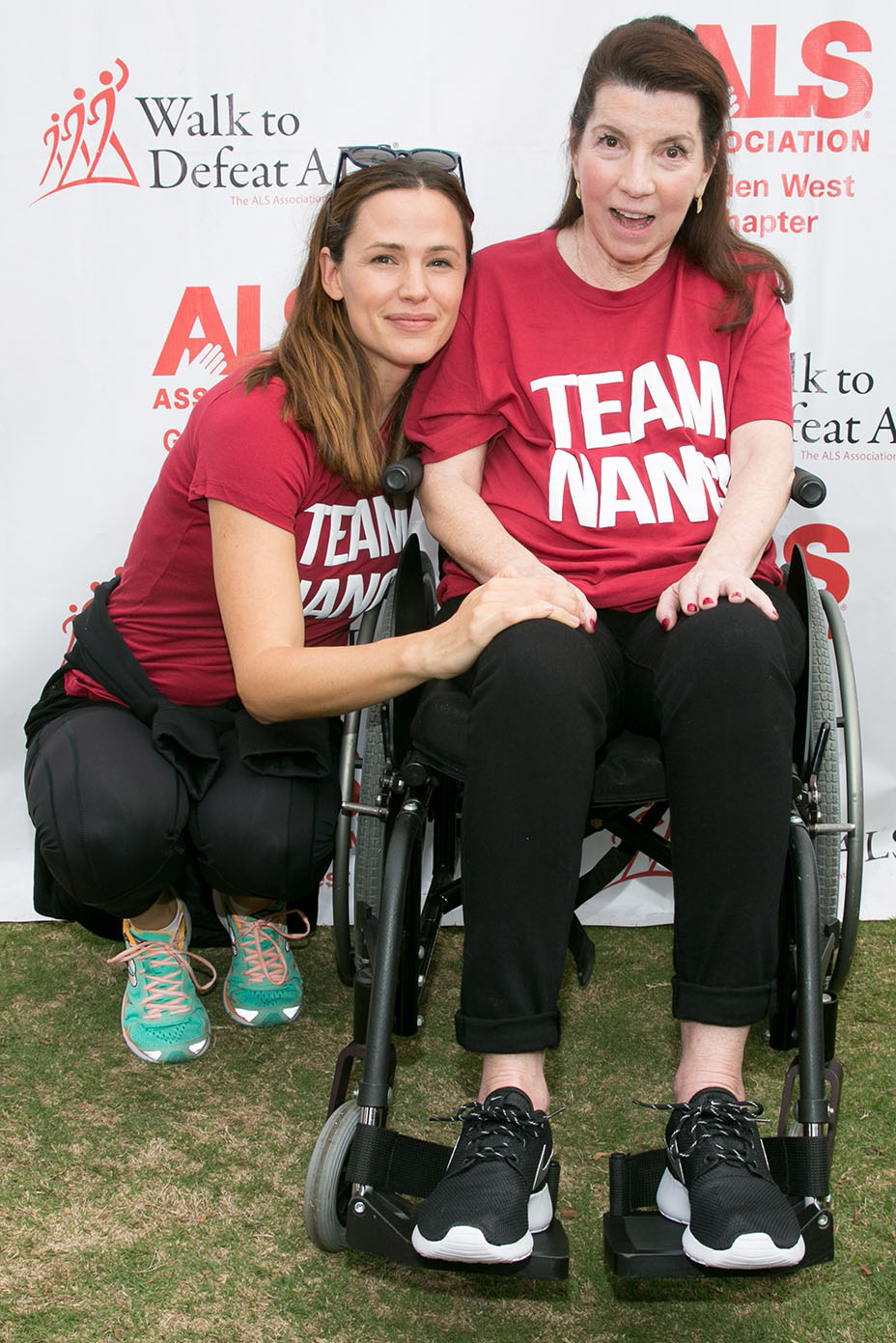 That’s just one of the many reasons why Cox — attending the walk again with daughter Coco — continues to be amazed by Ryder, she said. “Nanci is an incredible human being. Look at her — she’s gorgeous. She’s absolutely gorgeous,” gushed Cox, pointing to her longtime friend, who now makes use of a wheelchair for transportation. “She’s a fighter. She hasn’t given up in any way. As a new thing hits her, like losing the ability to write or to walk, she keeps moving ahead and makes the adjustments needed. I’m in awe of her.”

Garner made her first appearance at the Walk to Defeat ALS, showing up for Ryder, someone she has known since the beginning of her acting career, she said. The actress explained that her manager, King, started out as a publicist at BWR where she worked under Ryder. “I’ve known Nanci for almost 20 years,” said Garner. “She always maintains a sense of humor and a sense of self. There’s an incredible generosity in her spirit.” 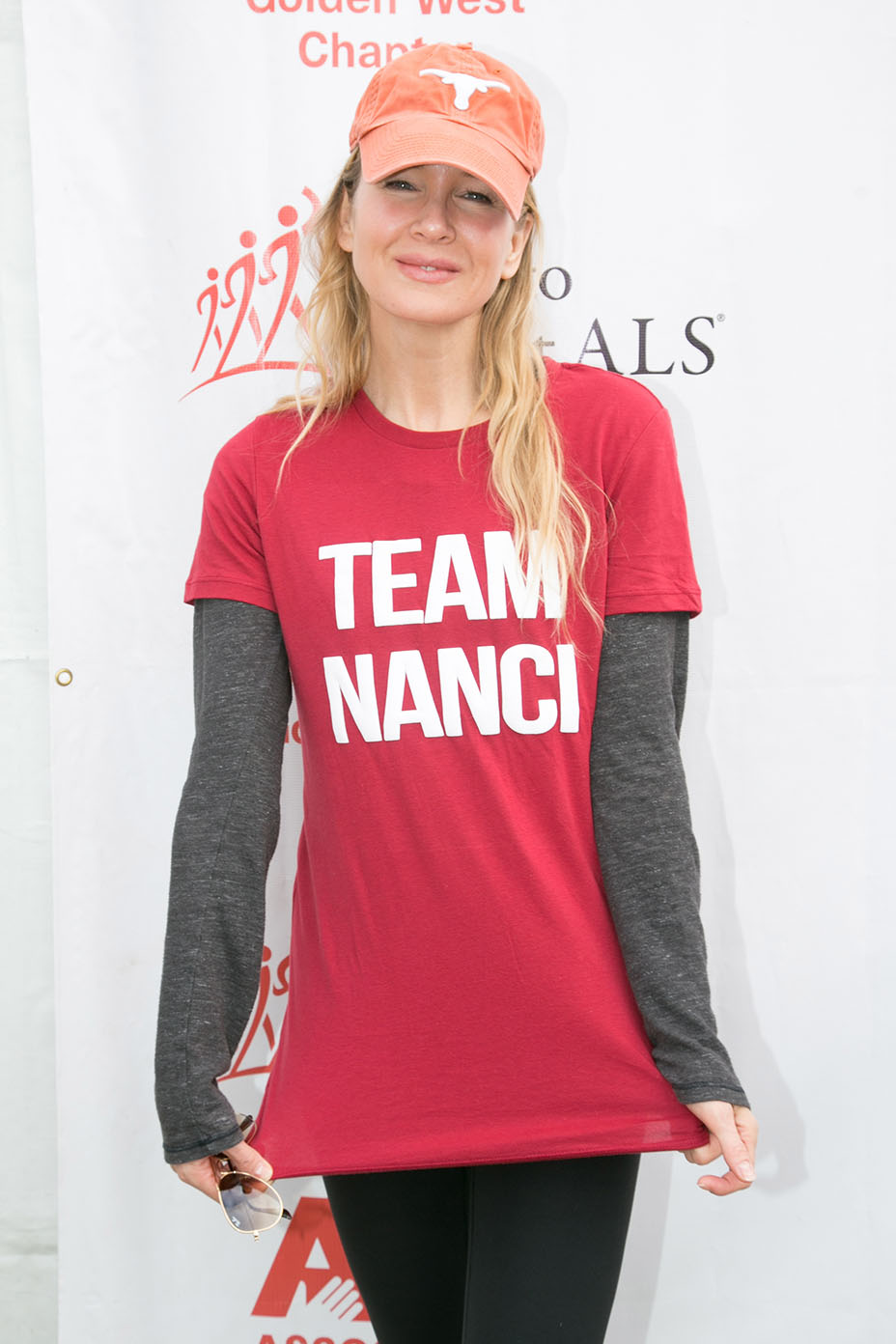 Someone who spoke specifically about that generosity was iconic L.A. retailer Tracey Ross, who praised Ryder’s work ethic and ability to generate good press, like she did in 1990 when Ross first opened her well-known boutique. The two have remained friends all these years, and Ross admitted that she also is friends with Pilates guru Mari Winsor, who joined Ryder in the VIP tent with her own huge group of supporters. Winsor is also a big name in the Hollywood community thanks to her practice, which has drawn devotees like Miley Cyrus and Drew Barrymore over the years.

“This is a horrible disease, and to see two people who had so much spirit and so much life … it’s not fair,” Ross said. “Perhaps because of their power and notoriety, they can bring attention and good to the nameless who are here and in the same struggle.”

The attention Ryder has received since revealing her diagnosis in 2014 was enough to catch the eye of her former husband, Paul Ryder, whom she married and divorced in her early 20s. The two reconnected recently and he made the trip from Florida, where he now lives, so he could attend the walk with his current wife, Cynthia, and their son. “Today is a huge day, obviously,” he told THR. “I’m absolutely blown away by the number of people who are here and the support that she has.”

Also scanning the crowd nearby was Kasteler, who remembered the times when she and Ryder worked closely together — Kasteler handled client Matthew Perry, while Ryder looked over Cox during the height of their Friends fame. The two reps even traveled the world on a press trip for the film Water for Elephants for clients Witherspoon (Ryder’s) and Christoph Waltz (Kasteler’s).

“We had a great time,” Kasteler smiled, before explaining how showing up for a friend puts life and work in perspective. “We love her so much and are here to do anything that we can. This is what matters. At the end of the day, what you want to be remembered for is what you did for people. It means everything to see people come out to support her.”

And while the past three years have been a challenge for Ryder as she has lost the ability to talk, eat, walk and, more recently, write, she can still see. Again, it was impossible to miss the sea of rose-colored shirts, too, filled by friends, peers and one-time colleagues. Reached via email on Monday, THR asked Ryder for her response to finishing another walk and raising so much money in the process. Ryder’s reply, while short and sweet, is yet another indication of where her focus lies these days. “Lot of love. Lot of support,” she wrote. “Cause for a cure.”

To join Team Nanci, or find out more information about ALS, click here. 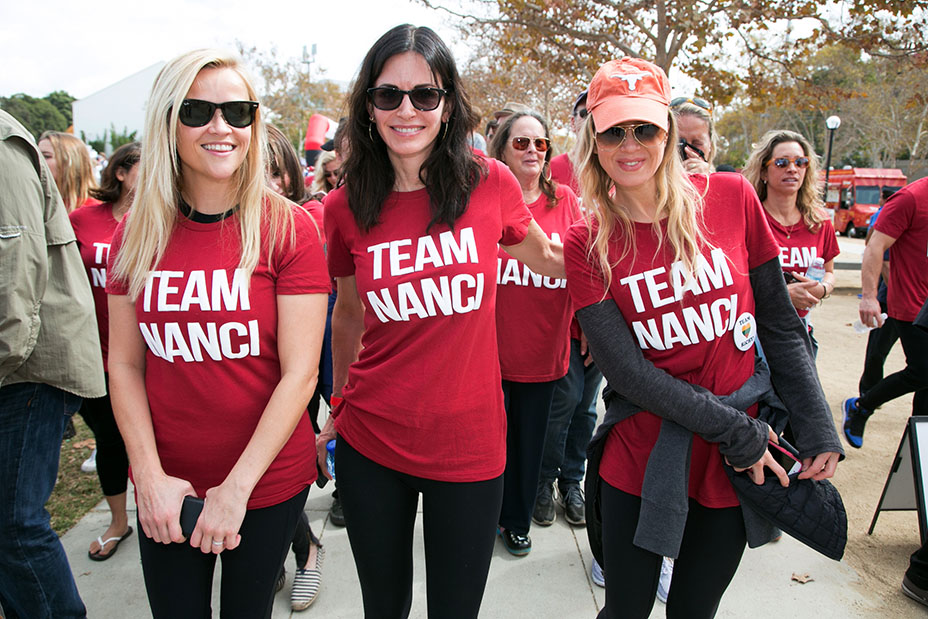 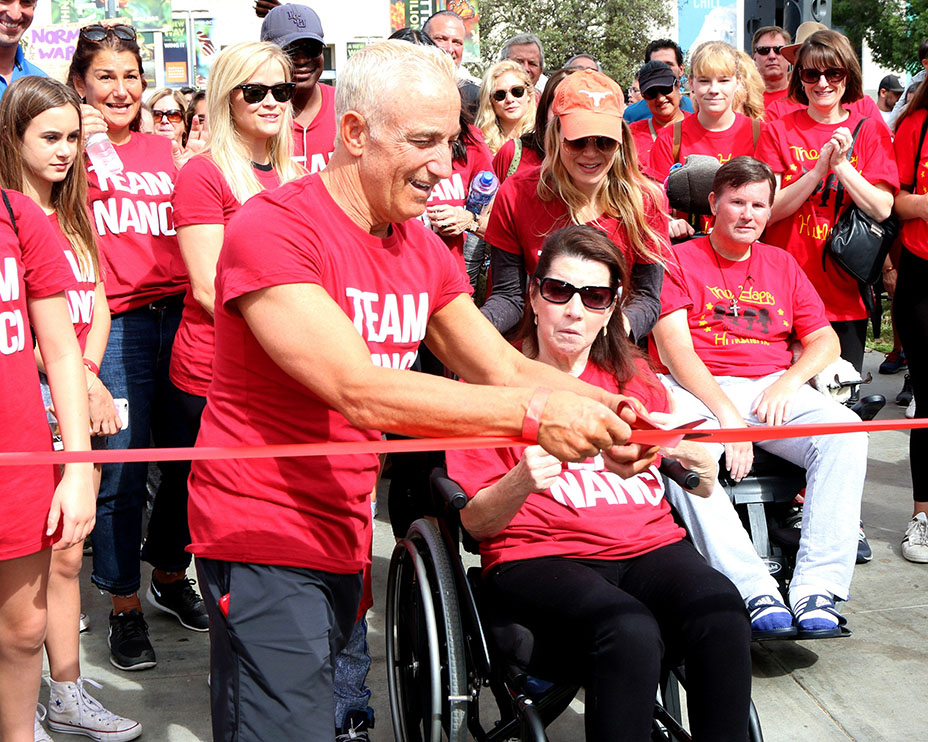 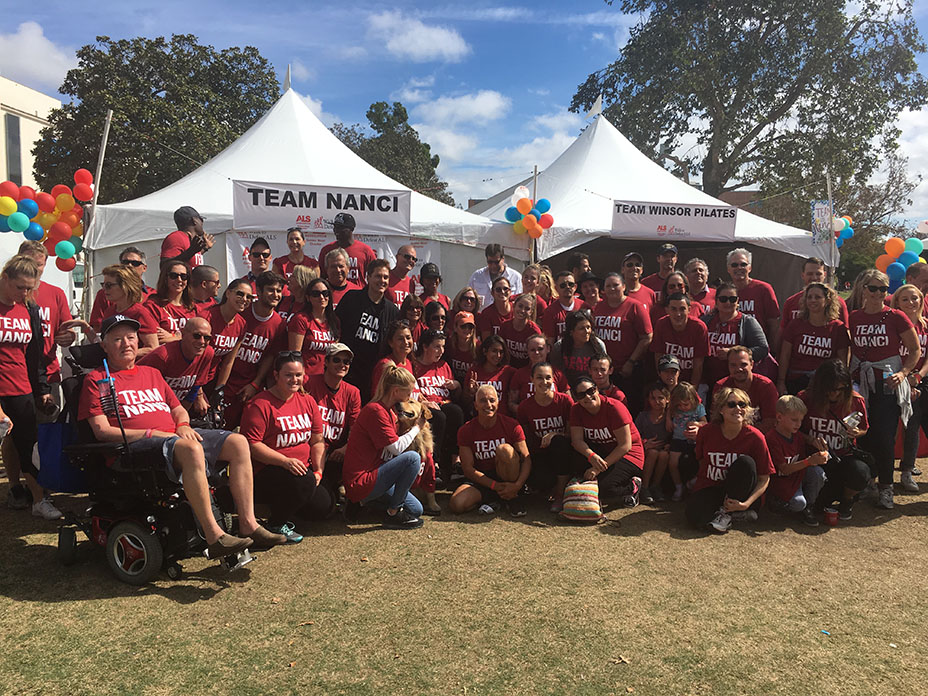