The Hollywood Reporter also spoke to the cast ahead of the packed event, which screened a 35mm print of Reservoir Dogs from Tarantino’s personal archive. Here’s what the the guys in the black suits revealed about the groundbreaking thriller that stunned audiences when it was released in 1992 and remains beloved today.

The movie made its debut at the Sundance Film Festival and it was a “fucking disaster.”

In 1992, Tarantino’s debut feature became the talk of the Park City festival. “That was a disaster, that’s kind of famous, actually,” Tarantino, 54, explained during the panel. As a budding filmmaker, he let the film festival screen his ‘Scope film, even though they didn’t have a ‘Scope lens projector. “It looks like caca all the way through it,” he recalled. “That would be bad enough, but then it gets to the final climax and all of a sudden the lights come up. Someone says, ‘Oh, shit!’ and they brought the lights down. Then everybody has their guns pointed on everybody else and right at the height of that scene, there’s a power outage and all of the power goes out. It was a fucking disaster.” Buscemi noted that he was the only castmember at the screening and that Tarantino didn’t want him to go because he said it would be bad luck. “It’s all your fault!” Tarantino joked onstage.

The second screening went much better.

Tarantino recalled how, back in 1992, the second week of Sundance used to be the bigger week for Hollywood, and that’s when they screened the film for the second time at the festival. “All the agents and executives and the cast were there,” said Tarantino, recalling how Sean Penn (brother Chris Penn, who died in 2006, famously played the role of Nice Guy Eddie) and Faye Dunaway were also there. “That screening went fantastic. Faye Dunaway even asked me a question, which I thought was cool. She asked me about how I put together the compositions with the actors.”

Wes Craven and many others — with 33 being the highest for one screening — walked out.

The filmmaker traveled the world for a year after his movie was released and used to keep track of how many people couldn’t make it through Mr. Blonde’s famous torture scene. “I started counting the walkouts during the torture scene, and 33 was the largest,” Tarantino recalled. When it screened at Spain’s Sitges horror film festival, he figured he’d have zero. “I thought, ‘Finally I’ve got an audience that won’t walk out’ and I even joked about it while introducing the film,” he said. “Five people walk out of that audience, including Wes Craven! The fucking guy who did The Last House on the Left walked out?! My movie was too tough for him.” Keitel and Madsen, along with Tarantino, both told THR they weren’t bothered by the violence in the film. “Violence was not its objective. It was more about the violence of living,” said Keitel. Madsen added: “I didn’t think the violence was shocking at all. In fact, when I first saw the movie, I thought it was pretty tame. I didn’t know what the big fuss was about.”

Tom Waits auditioned for one of the main roles.

Many famous names came thisclose to taking one of the starring roles, but a new name for the roster is musician and actor Tom Waits. “A lot of really wild people came in and read for the parts,” Tarantino explained. “I had Tom Waits read the [opening scene] Madonna speech just so I could hear him say it.” (The scene features the main players discussing the meaning of “Like a Virgin,” and even prompted Madonna to later tell Tarantino the song is about love, not dicks, as his character presumed.) Tarantino related that, aside from Keitel, whom the filmmaker said he was in love with as an actor, Waits gave him the most “profound” compliment on the script. “‘The script’s great, it’s like poetry’ — by a poet no less,” Tarantino recalled. But Keitel pushed Tarantino to give New York actors a chance to read for the parts, even paying for their flights, “and that’s how we got Steve [Buscemi],” Tarantino said. “Mr. Pink opened the door for me,” Buscemi told THR of the casting. “From those opening credits and putting the names to the faces was huge. I was able to get a lot more work because of it.” 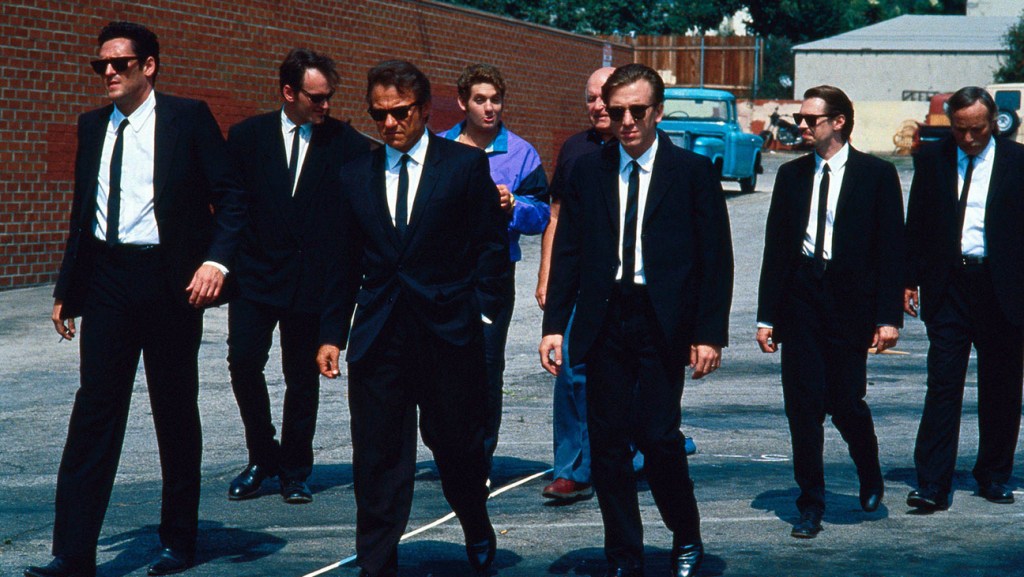 Making Reservoir Dogs was the happiest time of Tarantino’s life.

Tarantino, who had told THR he plans to retire after his next two films, recalled a personal story about the night Keitel had the cast over for dinner after they had finished two weeks of rehearsals and were about to embark on five weeks of filming. “I was living in Glendale, California, with my mom at the time and [drove to Keitel’s house in] Malibu, it’s a long drive but it’s a cool drive,” he explained. “I’m sitting there at Harvey’s and I realized almost all the pressure was off my shoulders, cinematically. These guys were so perfect in their parts. They were so vibe-ing with each other and I thought, ‘My God, if I just keep the movie in focus, I’ve got a movie.'” He continued, “I remember that night getting in my car and just taking that drive all the way from Malibu to Glendale on Sunset Boulevard and that was the happiest time of my life. It was this thing I had thought about for so long, making movies in general, and I thought, ‘This might just work out.'”

All of the stars wanted different roles except for Roth.

When Roth received the script, he was instructed to read the parts of Mr. Blonde and Mr. Pink. But he quickly knew he wanted Mr. Orange. “This thing arrives, this fucking script, Reservoir Dogs — which I thought was a spelling mistake,” he recalls. “About 20 pages in I thought, ‘I’ve got to do this.’ I plowed on through and then the liar emerged, the ‘bad guy’ — the good guy.” (Madsen couldn’t help but interrupt to correct him: “The rat,” he scowled to laughs from the audience.) Keitel says he initially wanted the role of Mr. Blonde, but realized he couldn’t play it right. “Michael and Chris Penn did one of my favorite scenes in the movie together,” he recalled. As for Madsen, he wanted the role of Mr. Pink and even auditioned for it. “I did all the big scenes and Quentin just stood there watching me,” he said. “At the end I was all done and thought I did a really great job and Quentin looks at me and says, ‘You’re not Mr. Pink. You’re Mr. Blonde or you’re not in the movie.'”

Tribeca 'Godfather' Reunion: Francis Ford Coppola on Whether Classic Film Would Get Made Today

Madsen says Mr. Blonde typecast him as the bad guy.

“I’ve done over 100 pictures and usually the only one that anyone wants to talk about is Reservoir Dogs and/or Kill Bill,” Madsen told THR. While he’s grateful to be a part of cinematic history, he says he thought his roles in Thelma & Louise and Free Willy would have helped to elevate him to leading-man status. “Unfortunately, it typecasted me as a bad guy,” he said. “I would prefer to be a leading man. I’m a leading man in a bad guy’s body, basically. And everybody thinks of me as the guy with the gun.” Still, he said he’s a long way from finished. “Dogs gave me a career. I wouldn’t imagine I would have been able to do that when I started as an actor, and there’s a lot coming that I’m waiting for.”

Tarantino revealed during the panel that though he and Madsen talked about the dance while rehearsing the scene, Madsen never actually did it until the day of shooting. In fact, Madsen had hesitations about filming the scene when Tarantino played the role of the cop during rehearsals. “I played the cop and said, ‘I have a little kid at home.’ And Michael [had] just had a son, and that fucked him up,” recalled Tarantino, who said Madsen felt the audience would like him killing the cop, but not if he had a kid. “Michael has always thought that Tim is the bad guy.” Madsen said he was so intimidated by the dance that he almost didn’t do it. “In the script it said, ‘Mr. Blonde maniacally dances around.’ And I kept thinking, ‘What the fuck does that mean? Mick Jagger?'” said Madsen, adding that Tarantino trusted he would come up with something on the spot. He didn’t even listen to the song — “Stuck in the Middle With You” — until the first take, and they only shot three total. “I started thinking about this weird little thing Jimmy Cagney did in a movie that I saw, that’s where it came from,” said Madsen.

The actor told THR that, since the cast mainly wore their own clothes due to the low budget, the cowboy boots were his. “My pants were too tight and I had to wear a T-shirt so I could have the squibs on, and I had cowboy boots on because they didn’t have any dress shoes,” he said. “That’s why I have the razor in the boot because it’s silly to take it out of the pocket if you’re wearing cowboy boots.” He added that Buscemi even wore black jeans. “We showed up like he asked us to show up,” Madsen added of Tarantino. “The only thing we got from wardrobe was the ties.”