On Sept. 20, newly minted EGOT John Legend will headline a star-studded opening — not for a film, for a shopping center. Twelve years in the making, Palisades Village, in the heart of seaside Pacific Palisades on L.A.’s Westside, is retail development impresario Rick Caruso’s most expensive project to date, even if it’s not his largest. (The entire 125,000 building square footage would fit inside Nordstrom at The Grove.)

To make Southern California’s newest manufactured main street a success in today’s challenged retail environment, he is counting on the patronage of “the 250,000 people who have spendable income within a couple miles of the site,” many of whom also happen to work in the entertainment industry, an “exceptional” demographic.

“We designed this in partnership with the community,” says Caruso, who has taken a locavore’s approach to developing the 3-acre center opening Sept. 22 with 46 tenants (more than 30 of them female-owned), eight residential units and 560 parking spots, including angled street and underground lots. 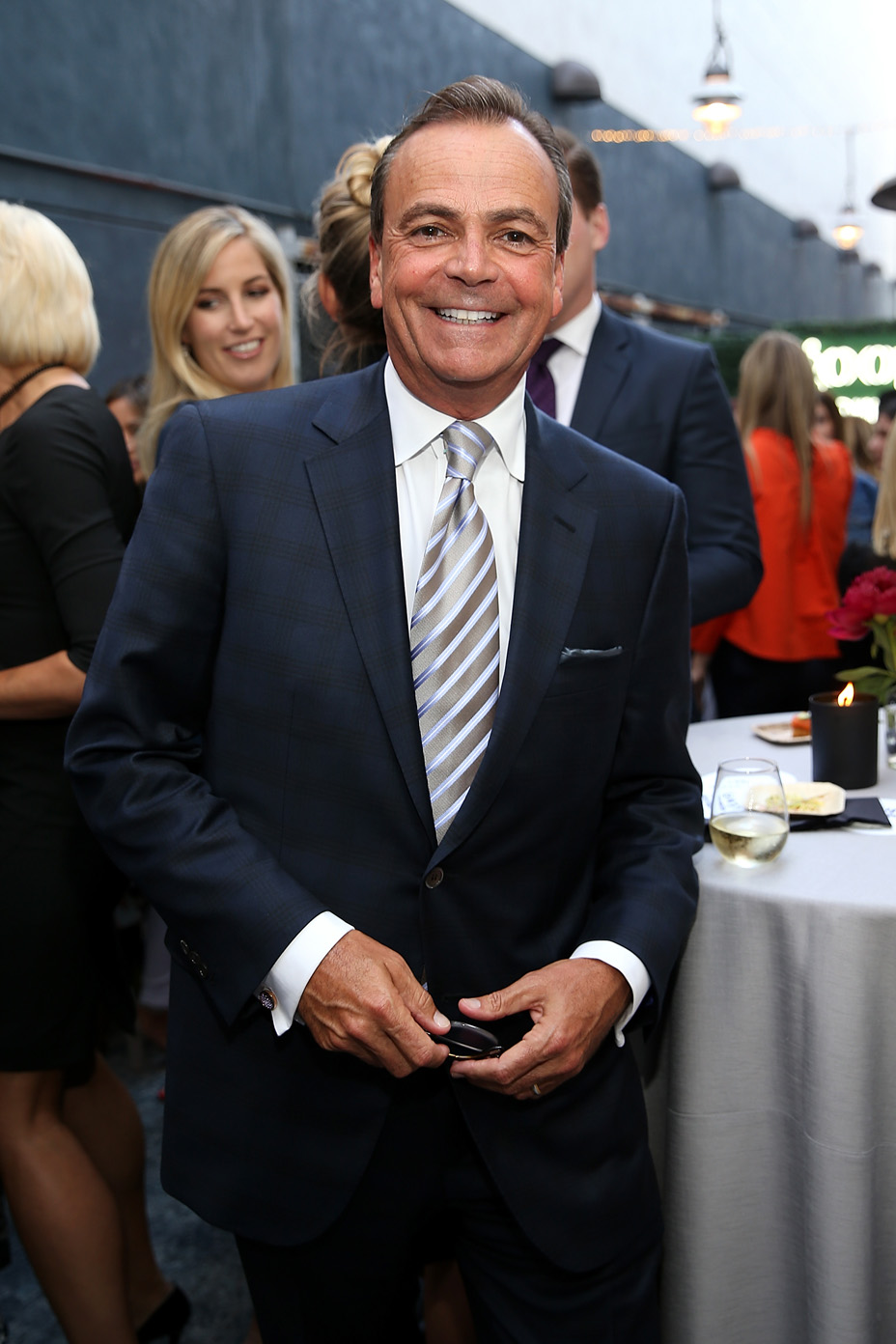 Caruso’s team traveled to East and South Hampton, Carmel, Greenwich and Boston, taking thousands of photos of grates, sconces, benches, street lights and doors, then hiring different designers for each retail space to ensure a variety of aesthetics.

The idea to revive the neighborhood’s Bay Theatre, closed since the 1970s, came out of one of many community town halls his team conducted at Palisades Charter High School, the first one drawing more than 900 people for a five-hour session. “Most communities — Beverly Hills, for example — have not wanted a movie theater because they worry it will attract people from the outside and create traffic congestion,” says Caruso, a Brentwood resident. “In the Palisades, they didn’t want to have to go to Santa Monica to see movies anymore, and they wanted their kids to be able to go by themselves.” Run by Cinepolis and inspired by a design by architect S. Charles Lee, The Bay has five auditoriums with 20 to 60 seats each, with automated reclining leather seats, push-button tech for snack service and opportunities for private rental. 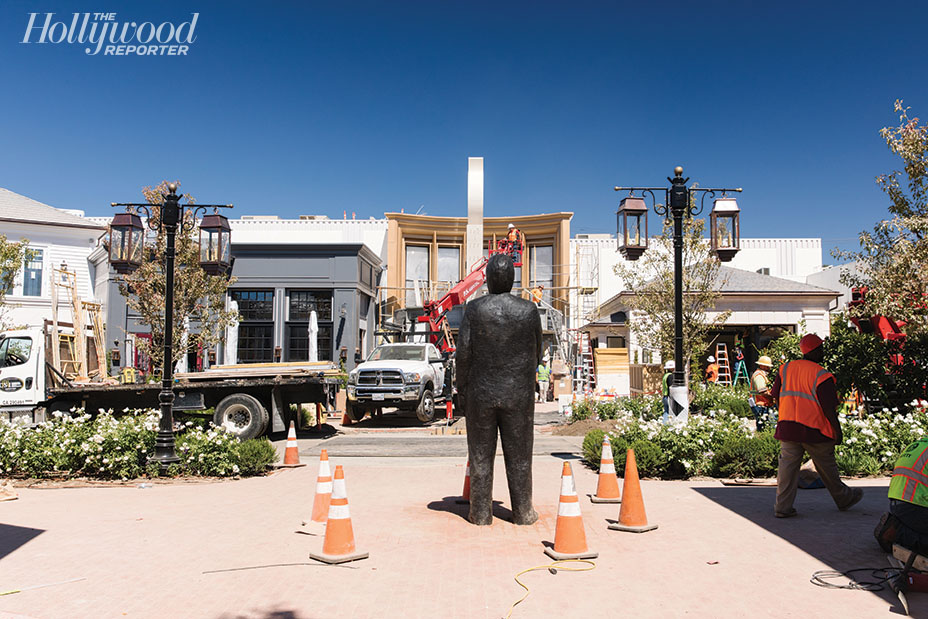 Locals didn’t want chain eateries, so Caruso imported Vintage Grocers from Malibu and Porta Via restaurant from Beverly Hills. The newly created Hank’s, named after the developer’s father, is an upscale burger joint from the Blue Ribbon Restaurants team, and Draycott is an all-day eatery from local restaurateurs Marissa and Matt Hermer featuring a Bloody Mary trolley. A patio overlooks a lawn that will host yoga classes and live concerts. The concierge also can arrange impromptu family picnics, complete with free blanket service.

Surprisingly, considering Caruso’s local spin, the Westside’s first Amazon Books store is front and center on Sunset Boulevard and Swarthmore Avenue, a 5,000- square-foot visual reminder of the high stakes involved in opening a physical shopping center in today’s increasingly digital marketplace. “There has been a lot of talk about the negative impact of Amazon, but it’s really been the best thing for retail because it has shown the way for brick-and-mortar to be more successful,” says Caruso, who cites such service “touch point” examples as free bike rentals and porters to take shopping bags back to your car.

There are a few other chainlets on the map, but all with Southern California roots, including activewear brands Alo Yoga and Carbon38, contemporary clothiers A.L.C., Anine Bing, Vince and Paige. Opening in the health and beauty category: the first Chanel Beaute boutique, a Sephora and natural products-focused Botanica Bazaar. Local home-goods emporiums Serena & Lily and St. Frank round things out.

Even more impressive, though, are the L.A. fashion designers Caruso personally recruited to open their first stores with him, many of whom previously had only a digital footprint, including Hollywood-connected jeweler Jennifer Meyer (Dad is NBCUniversal vice chairman Ron Meyer), shoe guru Tamara Mellon (newly transplanted to L.A. and engaged to Michael Ovitz) and stylist turned reality TV star turned designer Rachel Zoe. “I really wanted something on the Westside, where I was born and raised,” says Meyer, who counts Jennifer Aniston, Emma Stone and Mila Kunis as fans of her diamond letter and leaf-shaped pendants. “I couldn’t imagine opening my first store anywhere else,” she adds of her “perfect little jewel box” with pink Venetian plaster walls, white linen couches where customers can design custom pieces, and blue marble cases holding an expanded collection of tennis bracelets and gemstone pieces made for the store. 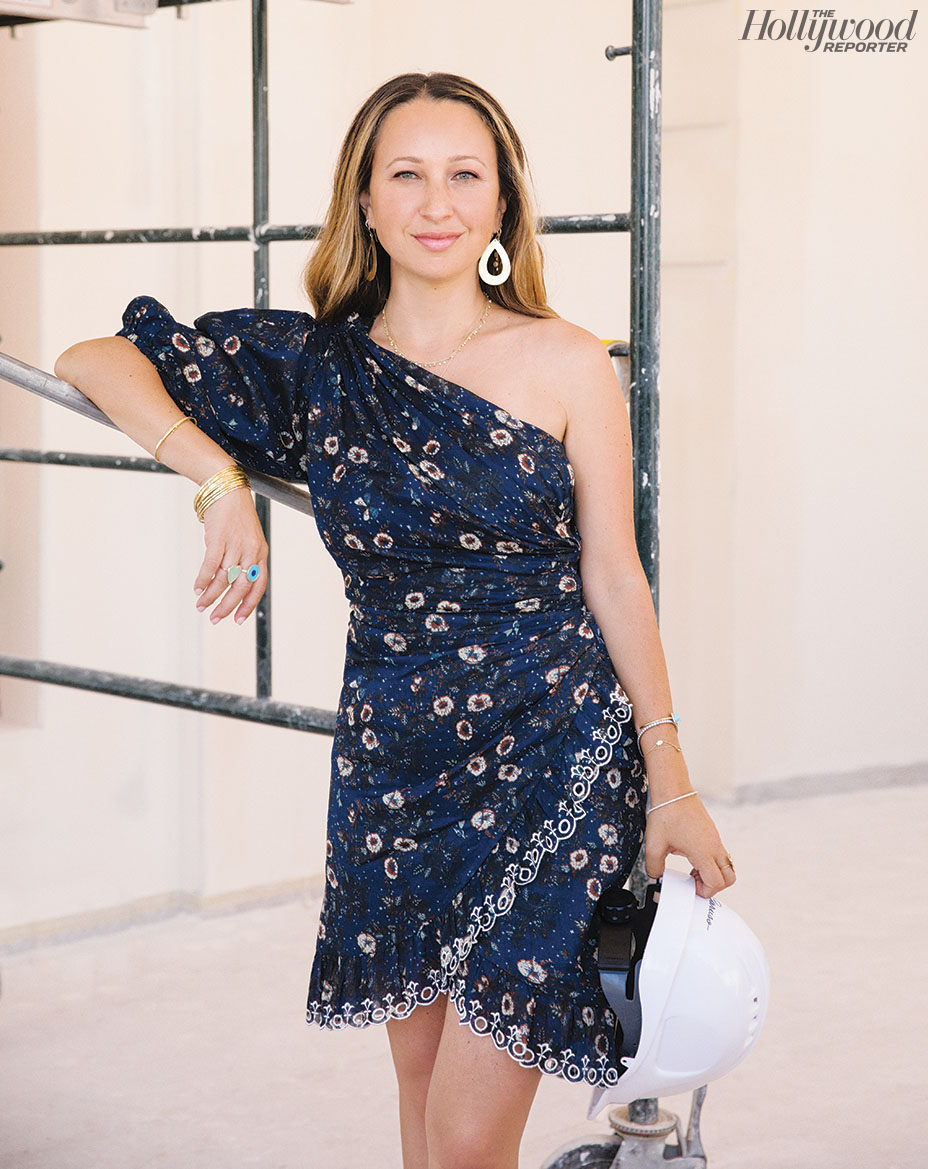 Mellon, who launched her own direct-to-consumer shoe brand in 2016 after building the Jimmy Choo empire, modeled her 400-square-foot store after her own shoe closet, with new styles dropping monthly, arranged by size. “It’s the perfect formula for the sensibility of people who live around there,” she says of Palisades Village.

Tamara Mellon Talks About Her New Brand and Her New Life in L.A.

For her first boutique, Zoe collaborated with her friend, Kim Kardashian’s stylist Simone Harouche, drawing on the same ” ’70s glam aesthetic” she mines for her clothing brand. The space features one-of-a-kind collection gowns as well as vintage pieces curated from Zoe’s own archives.

The unique L.A. offerings should make Palisades Center an attractive destination for shoppers inside the community (many of whom probably travel in the same social circles as some of the brands’ female founders) and to tourists wanting to soak up the SoCal lifestyle offerings and Hollywood adjacency. At fair- trade gifts and accessories store The Little Market, run by The Hills star Lauren Conrad and pal Hannah Skvarla, one can purchase an $18 “Local” jute shopping tote. “Shoppers can spend guilt- free knowing that every purchase gives back,” says Skvarla. 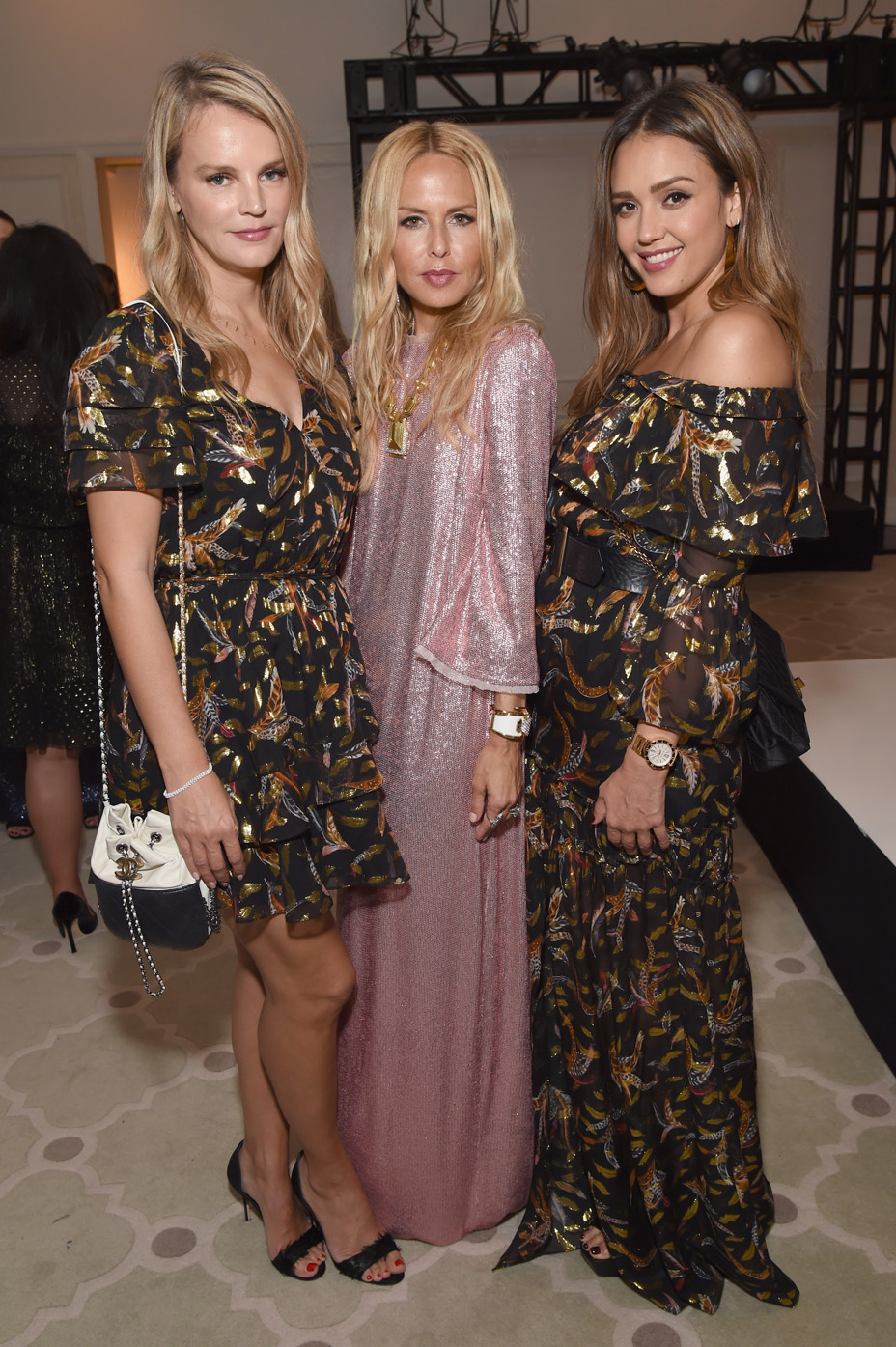 Elyse Walker’s eponymous luxury boutique, which has been open on neighboring Antioch Street since 1999, “was the only retailer servicing these people until now,” says Mellon. When Caruso approached Walker about moving to his side of the block, she said “no way,” but after seeing how closely the developer worked with the community, she thought: “We always wish we had more basics.” That’s how her Towne store was born. While the mother ship will continue to feature high-fashion trend items, the new 1,500-square-foot Towne in Palisades Village will be filled with edgy, minimal, solid- color basics for men and women by brands such as Nanushka, ATM, 6267, Kule, Officine Generale and Common Projects.

Realistically, Walker anticipates the neighborhood may experience some growing pains after the development opens. “I think the traffic is going to be tough and there will be a little shouting about it, but you are going to bring business to the Palisades, and that’s the price we’ll pay,” she says. “Anyone in retail knows more means more.”

Caruso says his vision was to make the Palisades a walkable community. He will measure its success by market share, sales per square foot and sales volume, but also by what he calls “heart share. We want to make an emotional connection with the community and for this to feel like an extension of their backyards.” 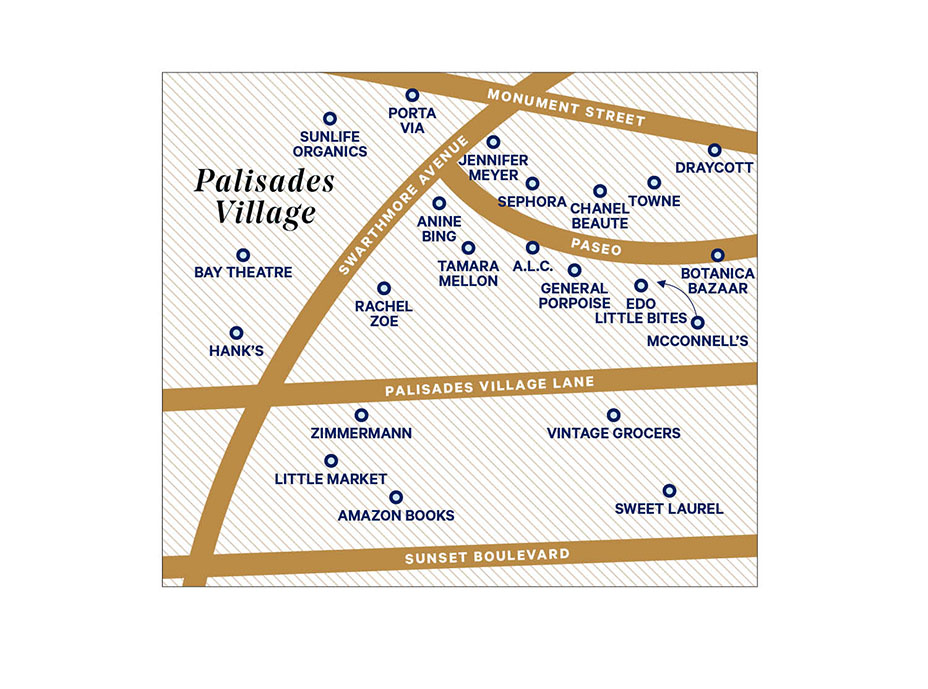