Set in a curving gallery that skirts the edge of Milan’s Triennale Design Museum, Rick Owens has opened a sprawling retrospective, charting the last 20 years of the California-born designer’s genre-smashing clothing and furniture design. Described as a personal narrative, Owens has curated a selection of garments, accessories, furniture, graphics and publications that chart the ebbs and flows — both intimate and professional — of his prolific career. “I wanted to take what a dismissive world might mock,” Owens describes of his desire to mount this show, “and create something fine, empathetic, kind and inclusive.”

Inside the Museum of Broadway's "Making of a Broadway Show" Exhibit

Owens, who was born in Portersville, Calif. and now lives in Paris, launched his eponymous line in 1994 out of a raw storefront on Hollywood Boulevard and soon caught the attention of the fashion world for his glunge — grunge and glamour — aesthetic. He quickly became known as the preferred designer of the the glamorous and goth — his wispy, monochrome drapery serving as their de facto uniform — with devotees running the gamut from Michelle Obama to Justin Bieber. 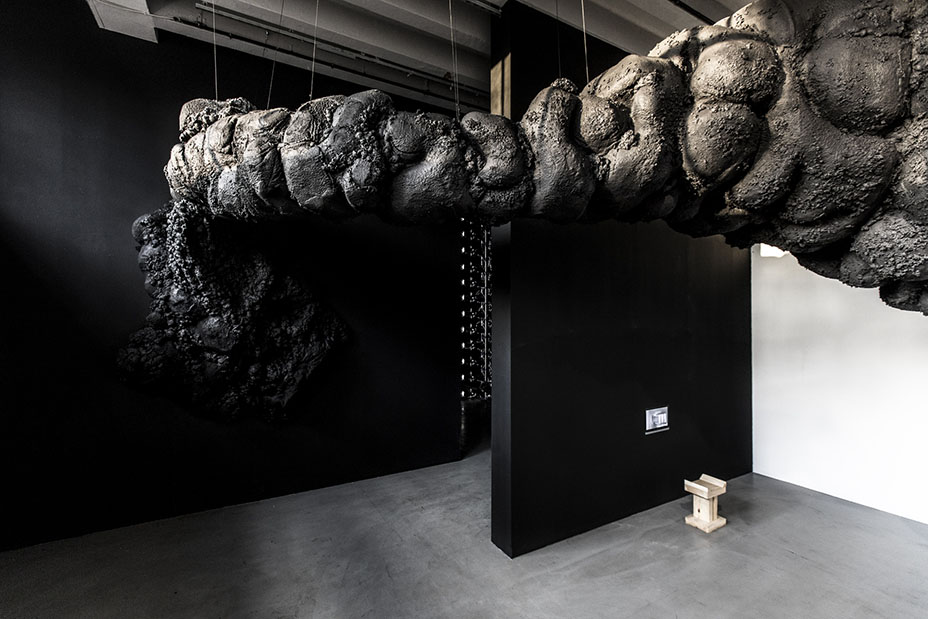 With the same flair for gothic theatricality that Owens has come to be known for in his runway shows (Cecil B. DeMille is a lifelong inspiration, he’s said), the exhibition, which first invites visitors to pass through a monolithic all-white entranceway befitting of an Egyptian pyramid, opens with an empty room, swirling with a foggy haze and lit only by two columns of theater-style spotlights arranged like an illuminated fence. Once you’ve passed through the tractor beams, you’re transported straight into the revolutionary designer’s brain — promptly greeted by a massive, handmade sculpture that twists grotesquely throughout the length of the space. The sculpture, touted by the curator Eleonora Fiorani as Owens’ first, resembles a hovering cloud of soot, but in fact is composed of concrete, lilies, the earth from the seaside in Venice (where Owens says he will one day be buried) and the designer’s own hair.

Besides the monumental quality of the set design, the exhibition’s true joy is seeing Owens’ work up close. Draped over mannequins perched on a rolling wave of black pedestals the striking, swanning cloth billows and puffs in all the wrong places — which in Owens’ world, is the point — the inveterate strangeness amplified by his unquestionable skill with a swath of fabric. Sculptural pieces like his Draped Jacket from 2006, or 2016’s Seahorse dress in silk gazar are a testament to just that. The furniture, too, is an exercise in decadence: oblique forms swathed in calf skin and camel fur are littered throughout the gallery, slightly menacing to look at but ultimately soft to the touch — and surprisingly comfortable. 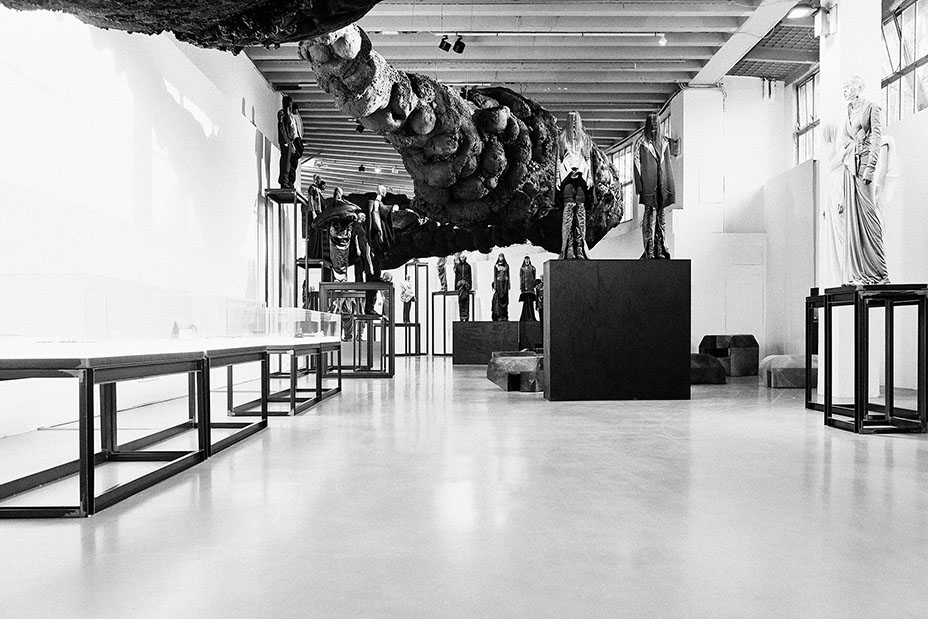 Aside from the eccentric beauty of Owens’ runway garments and the theatrical surreality of his shows, the most touching aspect of the exhibition (open through March 25, 2018) is the personal ephemera from the designer’s life, much of it deeply intertwined with his wife and creative muse, Michele Lamy. Lamy, who is French, met Owens in the ‘90s when she was the owner of Hollywood hangout Les Deux on Las Palmas, where she could be found most nights on stage reciting poetry or hobnobbing with its celebrity clientele. Snippets from their history in Hollywood are peppered throughout the show — a receipt from Musso & Frank Grill on Hollywood Boulevard, a black and white snapshot of historic gay bar the Spotlight Club — painting a loving portrait of their life together.

On the final stop along the exhibition’s trajectory you’re invited to lounge atop one of his signature furniture creations in a makeshift movie theater, where black and white videos of his most memorable runway shows are projected on the walls. They’re all there: the step dancers that made a splash with their incredible choreographed moves in 2014, the Estonian black metal band Winny Puhh, who stunned onlookers by hanging upside down as they played. And, yes, the human backpacks: the complicated harnesses featured in Owens’ Spring/Summer 2016 show that carried models Babybjorn-style down the runway, which you can also see up close in the exhibition. 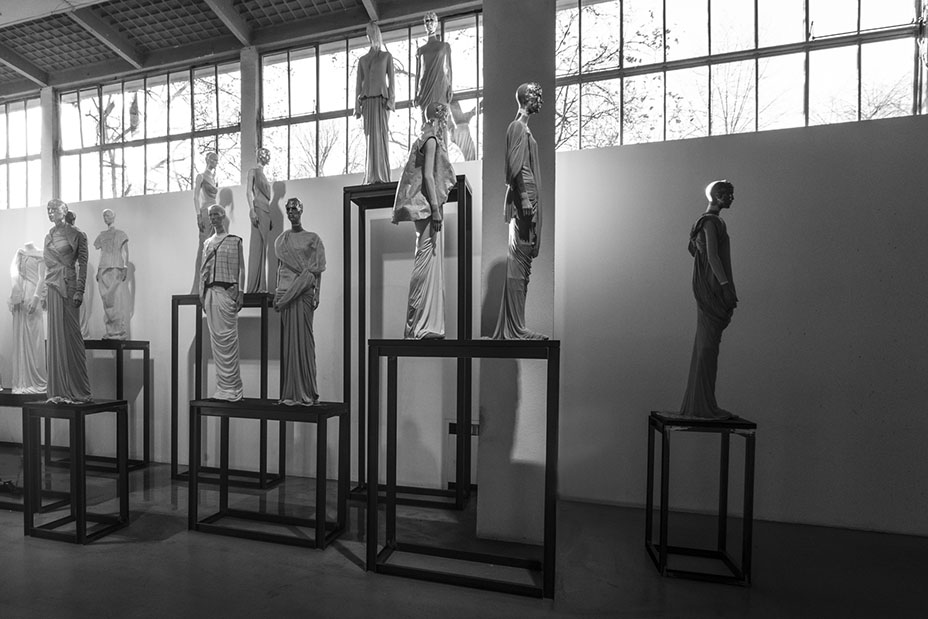 Behind Owens’ macabre persona, there’s a certain sweetness that comes out when you delve a bit deeper into his life. Hidden in the exhibition pages are loving mottos regarding his life and creative process. “I guess that’s what I’ve been putting out there,” he writes, “inclusivity, the commitment to an aesthetic ideal and sticking to it, trying to fulfill your moral and compassionate potential, restraint and modesty — which I violate repeatedly — and an appreciation of community.” Because in Owens’ world, you can have both. 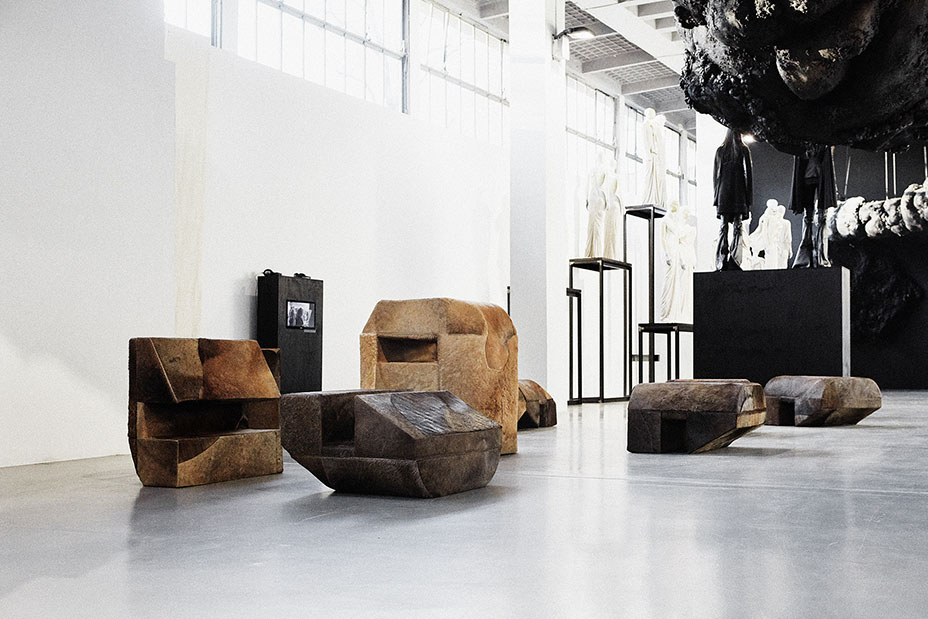