The Righteous Gemstones, Danny McBride’s comedy about a megachurch televangelist and his progeny in whom “the works of the flesh are evident,” was a modest hit for HBO when it debuted in August. But it achieved viral glory after its fifth episode, titled “Interlude,” which featured the original song “Misbehavin’.”

The flashback episode, set in 1989, centers on a planned reunion tour between family matriarch Aimee-Leigh (played by Jennifer Nettles, the Grammy-winning lead vocalist of the country duo Sugarland) and her brother, “Baby” Billy Freeman (Walton Goggins). The duet was written by McBride, series composer Joseph Stephens and McBride’s co-star/co-writer Edi Patterson. The song was an immediate hit thanks to its flawless mimicry of a certain strain of wholesome 1960s country music and absurdist lyrics like “Runnin’ though the house with a pickle in my mouth.”

McBride and Stephens talked to THR about the collaborative process of creating the original (and authentic-sounding) music for The Righteous Gemstones, the origins of the catchy “Misbehavin’ ” and whether the pair can top the tune in future seasons.

So, what’s the “Misbehavin’ ” origin story?

DANNY MCBRIDE Originally, when we introduced the idea that Aimee-Leigh used to be a child singer, it was just via some stage direction in one of our scripts where you meet Baby Billy, where you go into his house and stage directions revealed that there’s an album cover of a song called “Misbehavin’ ” that Aimee-Leigh and Baby Billy sang together. So that was just the flavor we were putting into that episode. We were never originally planning on doing that flashback episode [episode five, “Interlude”]. And about halfway through the season, I got to the point where I wanted to see what this [family] used to be when Aimee-Leigh was [alive]. So almost as an exercise, I wrote that [episode] just to know what the beef was with everyone so we can see it for ourselves. And in the script it seemed to make sense, like, “That song that we tipped in that third episode, we should just deal with that.” So I called Joey up and told him, “Hey, there’s this song ‘Misbehavin’.’ I don’t really know what it is. They would have sung when they were kids and it would have been popular.” And then I kind of just let it go, and then I think, Joey, you might have submitted something.

JOSEPH STEPHENS Before I ever sent anything, you sent me the voice memo of Edi [Patterson, who plays Judy Gemstone] singing.

MCBRIDE That’s right. Edi had asked me [about the song] and I was like, “I don’t know what the song is at all, but I just have this hook: ‘Mama told me not to, but I did it anyway / Mis-be-havin’.’ ” And we just started riffing off that a little bit, about two kids being bad and them learning not to be bad at the end [of the song]. So we just put down a few verses and had Edi sing it on my iPhone.

STEPHENS Everything sort of clicked once I heard that recording. I touched up some of the melody and created a chord progression beneath it and then added more lyrics and more structure to make it feel like a complete song.

MCBRIDE You added the best lyric: “Runnin’ through the house with a pickle in my mouth.” I knew we had hit something when you came back with that.

STEPHENS I was super pleased that you were down with that. Because when I sent it, I was like, “I don’t know what this means. It’s cute and innocent, but it’s pretty weird. Fuck it, I’m going to put it in there.”

MCBRIDE It sounds like something you could get in trouble for in a very religious household.

For me it completely made sense because your parents tell you not to run in the house, and they definitely tell you not to run with food in your mouth. And the pickle makes sense — in my mind it was a whole pickle as opposed to a spear or slice — because that’s a choking hazard. I could immediately picture it.

STEPHENS And also coming from the ’60s, it has this old-feeling energy to me. Like an old children’s book or something with a kid running around with a pickle in his mouth.

MCBRIDE I’ve worked with Joey since we did The Foot Fist Way. He’s worked on everything we’ve done, and so it’s become part of the process that I enjoy just as much as the casting or anything, is figuring out the tone of our show and how it can be translated into music. And with a lot of stuff we do, we’ll jump in tone a lot. We’ll have something that’s just ridiculous and then we’ll kind of expect the audience to be invested and maybe touched 30 seconds later. And music is really helpful in connecting those themes. It’s letting the audience know that, yeah, we understand this part’s sad, we understand this part’s fucked up. It’s a way to let the audience know that they’re on the right path. So Joey’s scores are always so instrumental in that because it has to be a score that feels of the story but is able to have shades that can be played for stuff that’s funny or stuff that’s scary or stuff that supposed to have suspense. And so when it came time to do Gemstones and figure out what the sound is for this, it was just another opportunity to figure out like, where does the story take place, in what world does it take place, and what sort of cues can be used from the music in this world to tell our story? So it became fun to figure out everything from the choral score to pieces of music that have to feel authentic and legitimate like the “Misbehavin’ ” song. If that song didn’t like it could really exist, it takes away a little bit of what makes Aimee-Leigh special. As funny and simple as that song is, it has to serve a really big purpose in the show. It grounds her. It makes her feel like she’s real and not just some silly joke where [the audience goes], “Well, who the hell would like that song? Why is she famous for that?”

STEPHENS I remember meeting with the production designer, and he was kind of grilling me about the song and really making me feel like, “This is a daunting task. This song really does need to feel like it’s a hit song, and it needs to feel like it’s authentic [to the time period], and we’ve got to find kids to sing it.” And looking back that seems kind of silly because in the end [the process] was so smooth and fun and just, like, pure. 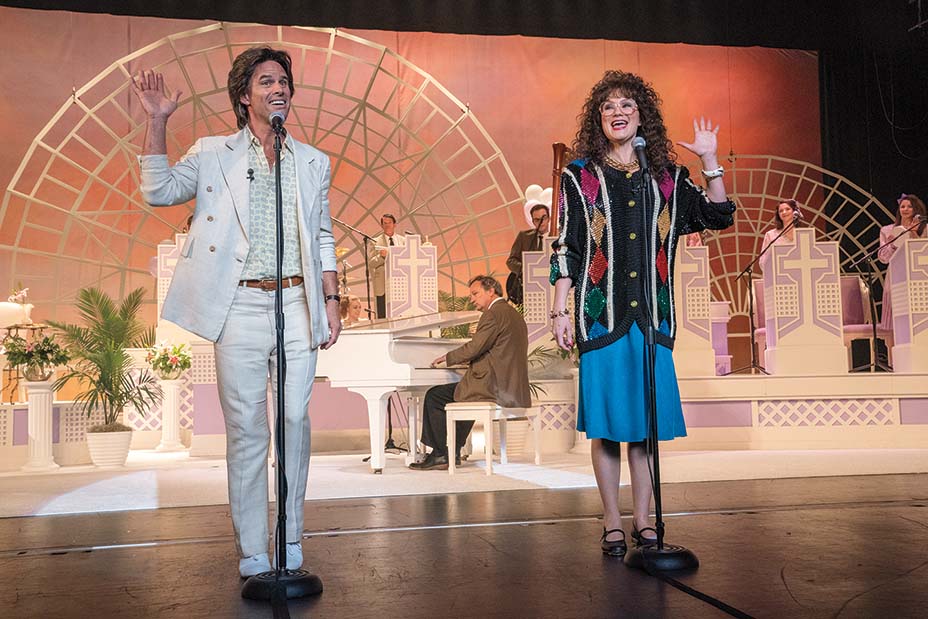 Was there a moment during production where you were like, “We’ve really got something here”?

MCBRIDE In production it was like, “Man, we have this whole cast of these great guys like [Adam] Devine and Tony Cavalero [who plays Keefe, a reformed satanist] and Edi Patterson — none of them is going to be in this [episode]. Will the audience go along with that?” I was nervous about if that would work or if it would just be the episode that people end up skipping over when they watched it. When we got that song finished, it just made me smile. It just felt right. And when we got to see Jennifer Nettles and Walton up there performing and they’re in the period costumes, I remember everyone in the crew just had a smile on their face. It was exciting, too, to see crewmembers going around talking to one another, like, “Oh, I haven’t heard this song in a while.” You have never heard this song! (Laughs.)

STEPHENS Once we started sharing the tune among us, I think we knew we had something. And then when the show aired, I was the most aware of [an] audience response than anything I’ve been a part of. I was very eager to see what people would think, if they would get it or if they would like it as much as we did. It was a big charge for sure to see the internet kind of swell around it.

It’s funny that you mention the crew thinking they’d heard the song before, because it was so perfectly done, so of an era.

STEPHENS Well, that’s the goal. To make it sound real. When we recorded the music to this, I studied a bunch of Carter Family recordings in the studio. I brought in a bunch of session guys and played everything live and tried to do it the way it was done back in the ’60s or late ’50s. I brought in a whistler, a professional whistler. I sent out a request for a reel, and I received this package with like 15, 25 different whistlers. It was so funny because some of these guys are whistling to very solemn, lonely music, and others are whistling to, like, the score to Godzilla. The entire gamut of whistling potential was represented.

Well, yes, your job is amazing, but being a professional whistler —

Has the reaction to “Misbehavin’ ” encouraged you to write more original songs? Or is there more of a concern of, “How can we top this?”

MCBRIDE Well, actually a lot of the religious songs in the show are original. We have some buddies, the Alternative Champs in Charlotte, who are able to tackle different genres of music and execute them flawlessly. And looking at this family, I mean, they’re just as much [in] show business as they are God’s business. We always imagined that original music and dance numbers and stuff would be a part of this world. So we’re looking forward to continuing to explore adding those elements to the show.

STEPHENS Yeah. I mean, there are no plans to, at least as far as I know, outdo “Misbehavin’.” Like, “Let’s do another kids’ version of a song, but make it better!”

MCBRIDE We’ll have a sophomore slump this season. But then in the third season, that’s the time we’ll beat “Misbehavin’.”

So coming out of season one, “Misbehavin’ ” was the hot hit. But the song that I liked best was “Lucifer” by Keefe’s satanist buddy, Cryptocore. Any plans to put a full version of that out?

STEPHENS That was our music supervisor, Devoe [Yates], singing on that. And he had some friend of his make like 15 seconds of some industrial, aggressive metal beats, and he started screaming “Lucifer!” on top of it, and that’s basically all it is. I don’t think he has a cache of “Lucifer” alts. I think that’s all that exists. But who knows what’s in store for next season!

MCBRIDE We need to revive that. We need some B-sides. Some “Lucifer” B-sides. 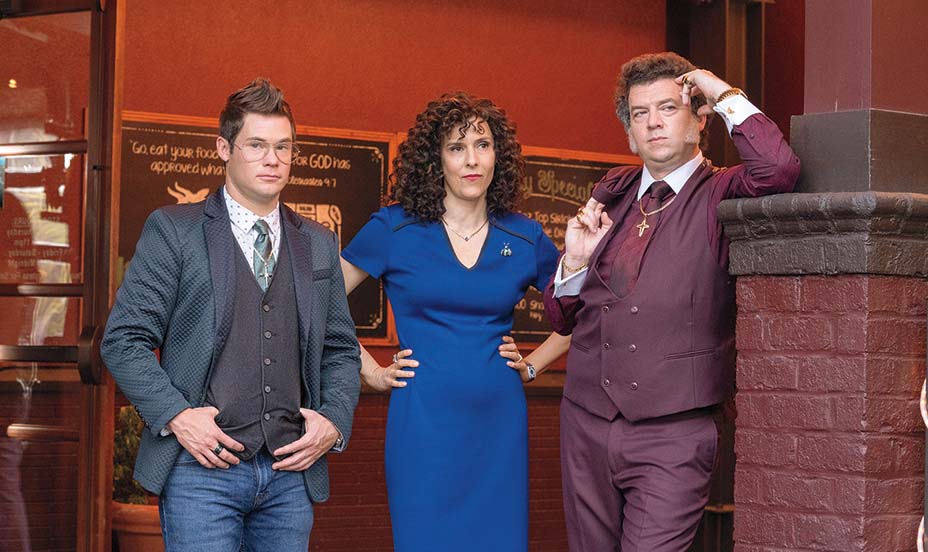 A version of this story first appeared in a July stand-alone issue of The Hollywood Reporter magazine. To receive the magazine, click here to subscribe.