Pulling back the curtain a bit more, the much-anticipated and heavily guarded Fenty Maison collection by Robyn “Rihanna” Fenty debuted a pre-opening of its Paris pop-up store to international press, bloggers and social media influencers who were given a jump on purchasing ahead of the public opening on Thursday, May 24. The store will stay open through June 2, with the digital shop going live on Wednesday, May 29. There’s speculation that the singer will return to greet fans at the tomorrow’s official opening. LVMH announced the partnership earlier this month and the first campaign video was unveiled on Monday.

But these lucky shoppers weren’t the first to get their hands on Rihanna’s new line. The newly-formed LVMH brand, in a series of firsts, hosted an intimate pre-shopping and cocktail event the day before. (Such firsts for both the French luxury goods conglomerate and Rihanna include being the first newly formed house since Christian Lacroix in 1987 and the first female and woman of color to create a new LVMH brand.)

LVMH and Rihanna’s friends, family and a slew of new colleagues such as LVMH chairman and chief executive Bernard Arnault along with his children (and fellow LVMH execs) Delphine and Antoine Arnault,  Dior creative director Maria Grazia Chiuri, Balmain creative director Olivier Rousteing, fashion designer Simon Porte Jacquemus and British Vogue editor in chief Edward Enninful toured the shop on May 22, when the singer-turned-designer was on hand to greet her fans, old and new. Enninful was among the first to make a purchase, posting a black leather and khaki anorak from the technically women’s collection whose size offering adds a genderless aspect to the line.

First man to buy fenty. Congratulations to my sis @badgalriri. So proud of you & @fenty by @sarahharris

The newly anointed Fenty CEO and artistic director was beaming with pride over the partnership. “It’s nothing that I could dream up,” said Rihanna in an official video released by LVMH. “To be respected as a designer of a luxury brand and Bernard Arnault telling me he knows I am a leader and can do this, I took it on because he believed in me.”  She noted that she is still reveling in the design process, a collaboration with Fenty style director Jahleel Weaver. “It’s a meticulous process. You don’t get bored when deciding what a new collection can be…LVMH is a monster of a machine, you can only expect the best.”

Explaining a bit about the Fenty Maison woman, Rihanna said it was someone multifaceted. “I think women are moody in general and dress according to that mood. I’m like that and the clothes reflect that,” she said. But she clarified that it’s not just for those biologically female: “I don’t want people to conform to one area to shop in. Whoever comes in and likes it should buy — it’s for any gender.”

Rousteing, a friend of Rihanna’s, proudly acknowledged the historical moment on another LVMH video. “She is a revolutionary and she will revolutionize Paris fashion with this incredible collection and approach,” he said. “It’s what is happening today; we need women like her who speak about diversity and freedom.”

The offerings, now on display in the Marais show space at Rue de Turenne, which was transformed into a Fenty Maison concept store, were meant to be the foundation of a RiRi-inspired wardrobe. The initial collection, titled “5-19” (though other outlets reported it is also being called “Weapon”), was a “greatest hits” reflection of the singer’s personal style. In a subdued color palette — white, salmon pink and khaki, mixed with plenty of dark Japanese denim — the point of view began with sharply tailored masculine silhouettes such as suit jackets, button-up dress shirts and tailored slacks and gave them a feminine and sometimes subversive club-wear twist adding up to plenty of options for the office and beyond. 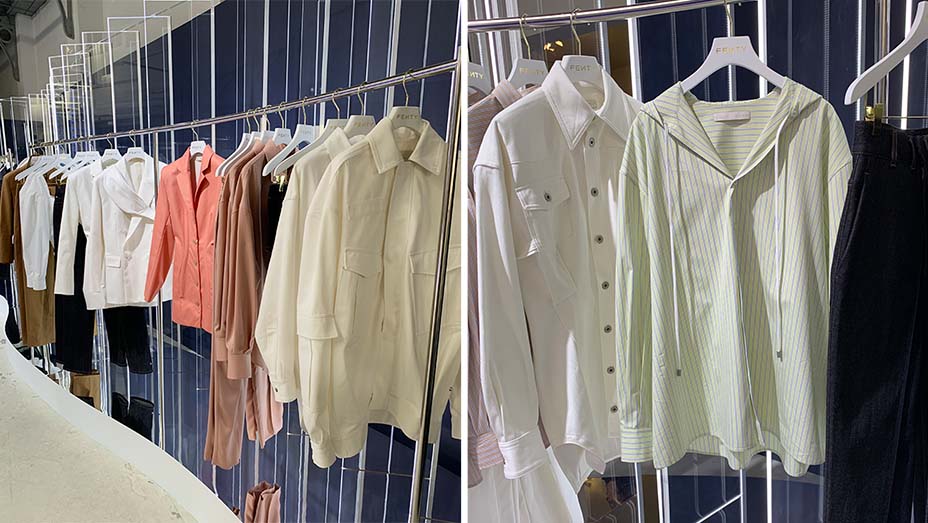 To wit, a double-breasted jacket with strong shoulders, corseted waist and fitted rear became a minidress; a white cotton men’s shirt was reimagined into a sleeveless fitted minidress, while another version showed the same but with big puffy sleeves; and pants were given added volume with a large fold-over pleat starting at the waist and hitting the floor. Every look was presented with an execution befitting one of the world’s largest luxury groups.

Denim shirt jackets were either oversized and nipped at the waist and the 15-people strong sales force — all plucked for their luxury retail sales reputations — donned the stiff dark blue jean tops and pants.

If the ready-to-wear was in some ways subdued, the accessories aimed to shake things up with extreme, pointed strappy sandals anchored by a low vamp; bold gold-coated brass costume jewelry with Swarovski crystals that snaked around the ears or wrist; oversize resin hoops and square earrings; canvas fanny packs; baseball caps; and the infamous sunglasses line that gave the world a hint of what was to come when Rihanna donned them back in January. 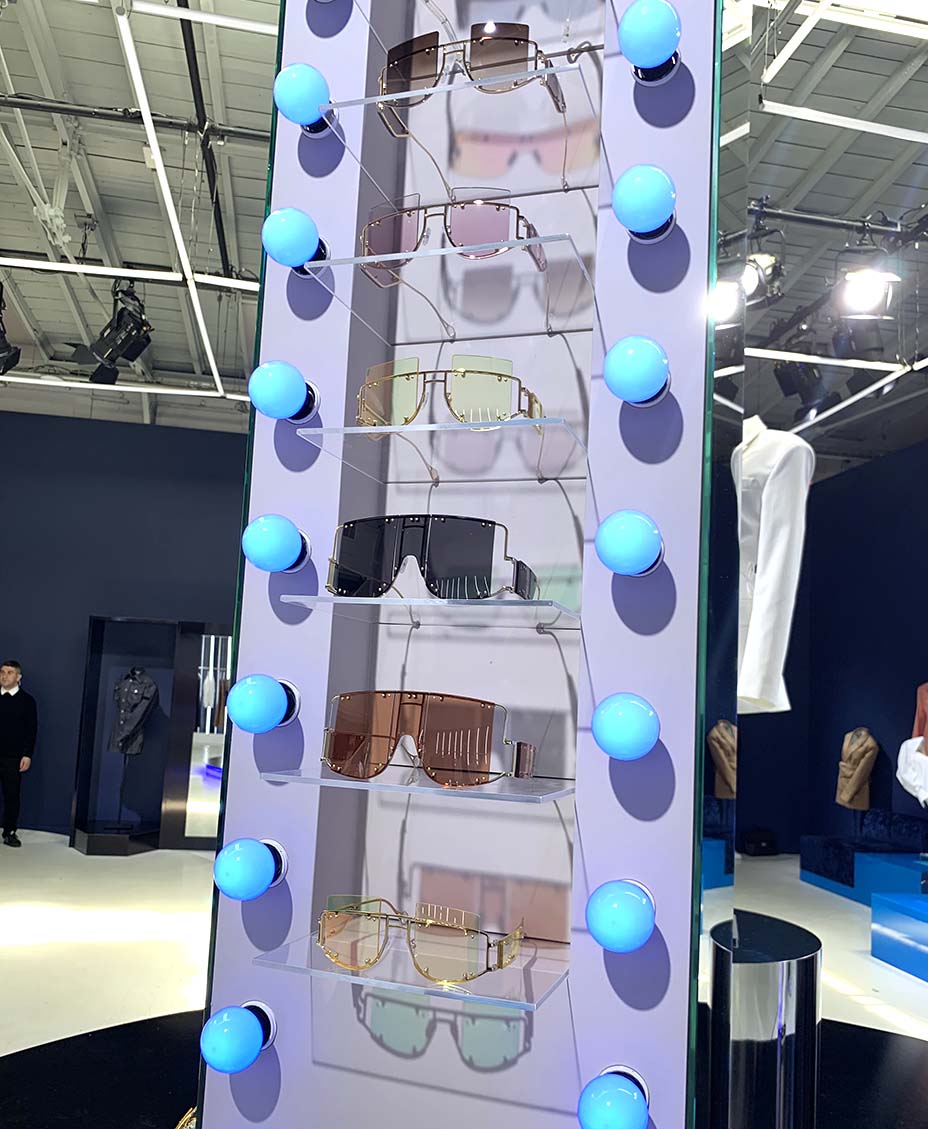 With names such as “Guarded, “Blocked” and “Anti-social” the shield-styled specs have a futuristic look, elevating the collection into more dramatic territory. 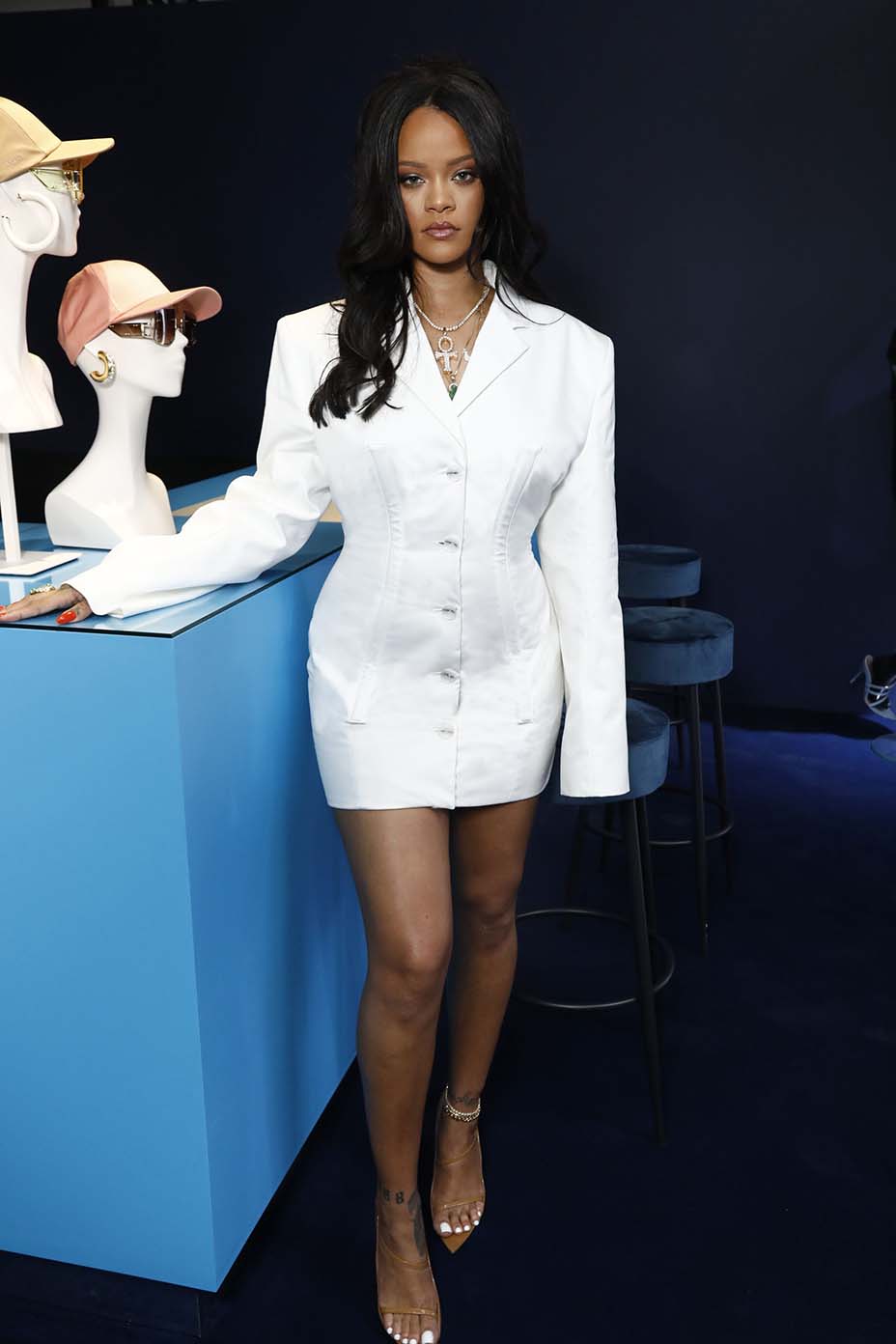