During the live auction at Monday night’s benefit for the Parsons School of Design in New York City, Rihanna wanted to ensure the item she donated — a package that included two front-row seats at her Fenty Puma show in September — captured a good price. So when the bids hovered around $12,000, RiRi asked for the microphone. “Anybody who wants to beat that, I’ll even style you for the show,” she announced. The winning bid? $24,000.

That extra push helped this 69th annual benefit raise $2.3 million in scholarship funds for students of The New School’s Parsons School of Design and College of Performing Arts. And make no mistake, Rihanna is a fan: She’s often worn designs by Parsons MFA students, and on Monday night was dressed in a menswear-inspired camel suit by Matthew Adams Dolan (in April she wore a denim look by the MFA grad to Coachella). In addition to her philanthropic work and the success of her Fenty Puma line, this devotion to the work of Parsons students is one of the reasons the school chose Rihanna as one of the night’s honorees, alongside designer Eileen Fisher and Neiman Marcus, with CEO and president Karen Katz accepting the award for the Dallas-based retailer.

Rihanna Opens Up About A$AP Rocky, Pregnancy and Losing Her Coping Mechanism: "I Can't Just Go and Smoke a Joint" 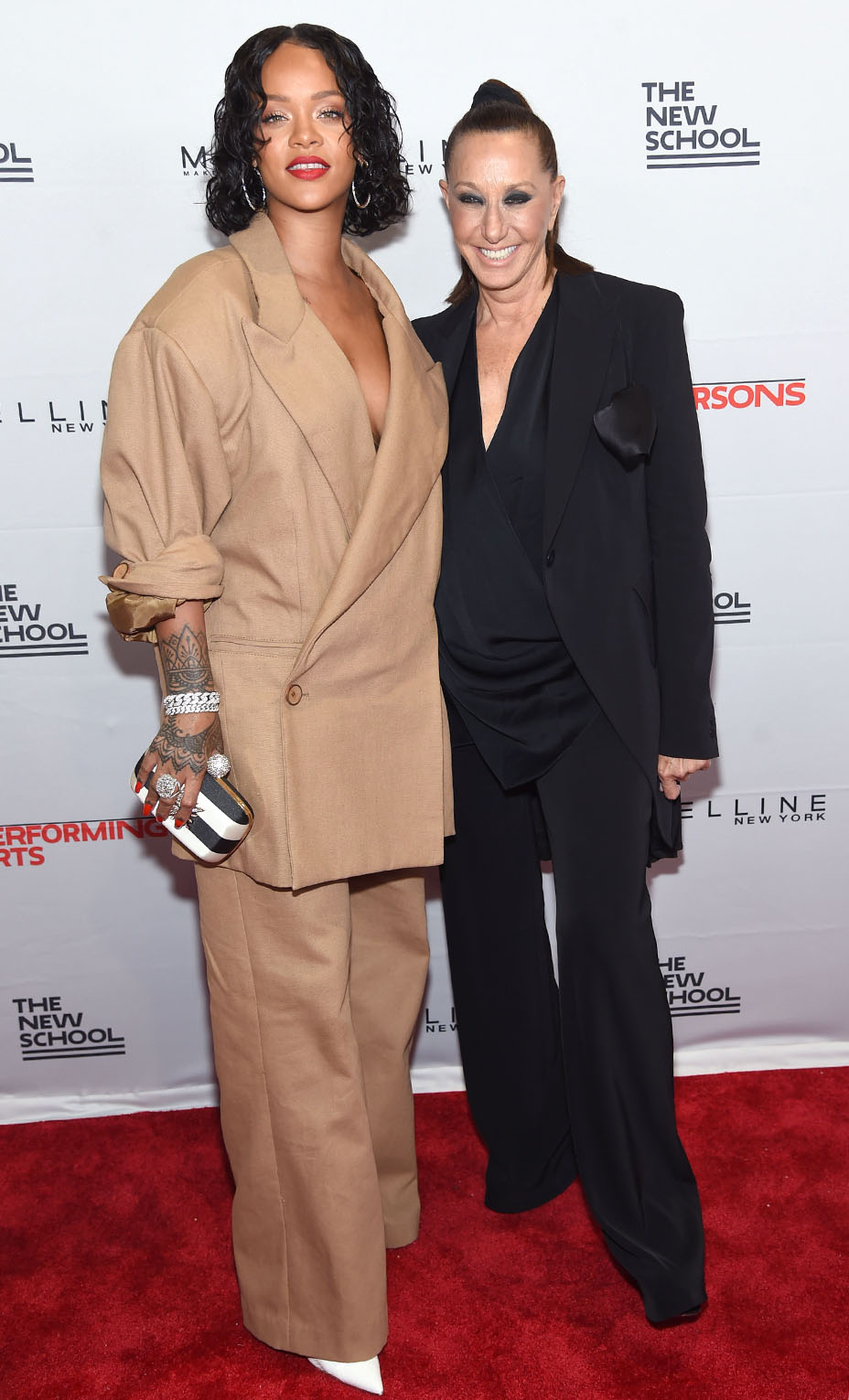 The crowd at Pier Sixty also included Carolina Herrera, Donna Karan, David Yurman, Mara Hoffman and Thom Browne, but there was no escaping the Rihanna giddiness among students. “She’s such an inspiration to us as fashion-design students,” said Olivia LeBlanc, a graduating student who captured one of the night’s Designer of the Year awards. “She’s always showing us the power of philanthropy as well as fashion. She wears designs by Parsons MFA students and graduates, anyone who is up-and-coming. She has the same approach to style whether she’s wearing Chopard and Dior or she’s wearing the work of a Parsons MFA student, and I really appreciate that.”

Following a runway show of work from select graduates, Rihanna accepted her award and made it clear that she loves the school for reasons that extend beyond red carpet choices. “It was especially important for me to come to Parsons tonight because you are all the next generation, and we need to invest in you,” she told the students. “You’re the ones who see the world with new eyes, with new perspective, who care about the future of our planet and the current state of the world. I’m here to say that I’m listening and I’m watching, and you’re up next.”

Parsons alum Karan was actually up next — “How do you go after Rihanna?” she joked — but brought the triple threat back onstage to announce a collaboration with three recipients of the Parsons Design Fellowship: Graduates Helena Bajaj Larsen, Valentina Ramirez and Ishita Mehta will work with Karan’s Urban Zen Foundation and Rihanna’s Clara Lionel Foundation (named for the singer’s grandparents) to develop a merchandise line with artisans in Haiti. “It’s been the most gratifying thing in my life, to go down there and see artisans from all over the world,” said Karan, who’s worked on the Parsons program, called DOT (Design Organizational Training), for the past three years. “That artistic expression is what the answer is for tomorrow. Whether it’s music, the arts, fashion, that’s where the soul arrives, and that’s what brought me to Parsons School of Design.”

The woman everyone wanted to see agreed. “We often tear our youth down when we should be building them up. Our future is in their hands, you know?” Rihanna said. “Our children, and their children’s lives, are in their hands. That’s the reason I’m here tonight, and why we’re all here.”

Added Karan, thinking about the upcoming Haiti project: “We’re going to have so much fun.”