Surrounded by stacks of books three floors high, show goers were seated at study tables the length of the library that also doubled as the runways.

Cara Delevingne got into the role of a delinquent wearing a Fenty hoodie, and sliding into a seat next to study buddies Nick and Joe Jonas. Future was also in the crowd, near Kering boss Francois Henri Pinault and his wife, Salma Hayek, who was wearing a varsity jacket from the Kering-owned Puma sportswear collection.

Rihanna’s third show for the label, inspired by American cliques, including jocks, goths, skaters, nerds and preppies, started with a flurry of lights and models filing out in front of the shelves on the balconies above, hanging off the railings and scowling like moody teenagers

Wish the library stacks looked like this when I was in school #FENTYxPUMA #PFW pic.twitter.com/iPqLUTzNMO

Then they headed downstairs and bolted onto the study tables as music blared. Conceived by Rihanna, with the help of agencies Prodject and OBO, the show was as electrifying as a concert. And the photo ops couldn’t have been better, as the male and female models stomped by on the tables in all manner of cool-looking university wear, including school girl skirts and tartan bustiers, oversized tennis sweater dresses, velour track suits, cropped puffer jackets and baseball tees, with several pieces emblazoned with Rihanna’s lucky number 13 or 1988, her birth year. 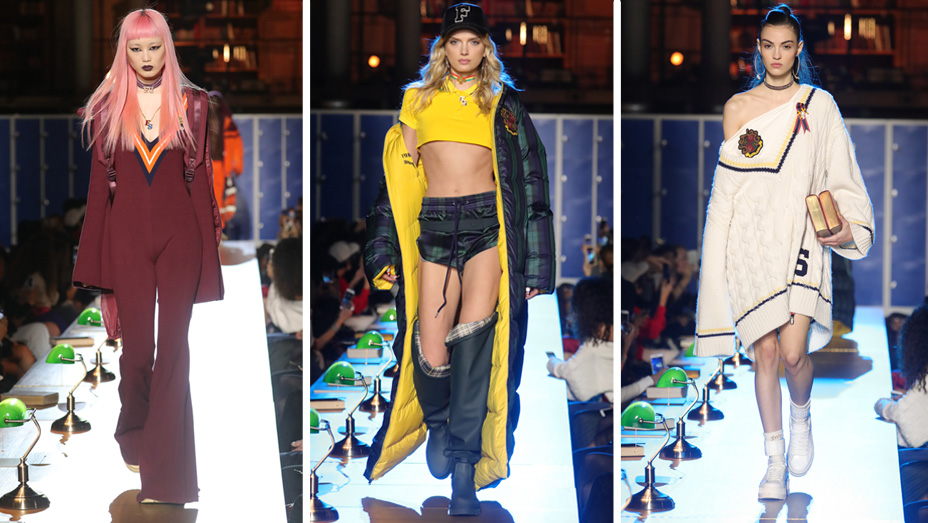 “When I was in school, it was always my dream to be able to dress up in whatever I wanted,” Rihanna, the brand’s creative director, said in a statement. “But in Barbados it was mandatory to wear a school uniform, so I had so much fun this season creating these back-to-school inspired looks, and I’m honored to present the collection in such a majestic national monument.”

The feet were at nearly eye level, letting everyone take in all the new Fenty thigh-high sneaker boots, Mary Jane sock booties and creepers — in mixed tartan, of course. Oversized scarves and teddy bear shaped puffer backpacks rounded out the look.

It’s the third Fenty collection for the pop star, whose Marie Antoinette-at-the-gym inspired spring range hits stores on March 9. By the time Rihanna took her bow, she was beaming and Delevingne couldn’t contain herself, jumping up to applaud. Even Pinault seemed pleased.

Forget detention, I give Rihanna an A.