In April, the Beijing International Film Festival saw zero South Korean titles in its lineup of more than 500 films. One major South Korean investor-distributor, which asked not to be named, said its films had been disinvited, while Korean superstars with immense fan bases in China were conspicuously missing from the red carpet. Key market events hosted by the state-backed Korean Film Council (KOFIC), which have been a staple of the event since the fest’s second edition in 2012, were also called off. Likewise, Jeonju International Film Festival, Korea’s largest indie cinema event held earlier this month, saw virtually no Chinese guests and just three Chinese titles in its lineup. This is a fraction of recent editions.

Ever since Seoul decided in July 2016 to deploy a U.S. missile defense system, Terminal High Altitude Area Defense (THAAD), its relations with Beijing are widely deemed to have reached their worst point since diplomatic ties were forged in 1992. No South Korean star has obtained permission to perform or work in China since September 2016, and actor Ha Jung-woo was barred from appearing in a Chinese film opposite actress Zhang Ziyi and director Kim Ki-duk’s big-budget Chinese title Who Is God has been put on hold. In early March, Chinese Foreign Ministry spokesperson Geng Shuang declared, “We are firmly opposed to the deployment of THAAD” in South Korea. “This position is very firm.”

According to KOFIC, zero Korean films opened in Chinese theaters in 2016. Though the Chinese quota on foreign films and censorship regulations are notoriously rigid, the Chinese government broke its own policy to accept more than 40 foreign titles instead of the usual 34 last year. Onlookers have noted the rise in the number of Hollywood and Japanese titles, which starkly contrasts with the complete absence of Korean works, even though the latter have traditionally enjoyed tremendous popularity on both the small and big screens as well as streaming sites in China.

But some have noted that there hadn’t been that many Korean films in Chinese theaters even before the THAAD issue. The last Korean film to play in China was Assassination in 2015, a year before the fallout over THAAD. The top-grossing period film ($87 million at home) received a wide release in China and earned a total of $6.73 million there. In spite of China’s notoriously slim import quota for films, Korean films featuring historical conflicts with Japan have fared better because China also shares bitter memories of Japanese invasion.

The South Korean government is taking measures to help filmmakers who have suffered damages from the political situation. In March, KOFIC opened an online help center, where small- and medium-sized firms whose revenue has plummeted 10 percent or more due to Beijing’s closed port doors are eligible to apply for financial support. “So far, a handful of cases have been reported to the council, and we are working with members of our Beijing Film Business Center to help,” says Han Sang-hee, director of KOFIC’s international promotion team.

“The worst case scenario would be Chinese audiences turning their backs on Korean content,” adds Jung Soojin from Korean distributor-investor Showbox, which opened a bureau in Beijing in 2015 for joint ventures with China. “Even if diplomatic ties smoothen, it would be much more difficult to win back audiences’ hearts. However, Korean films and TV dramas are still being widely consumed in China, even if it means through piracy. This is a great relief.” 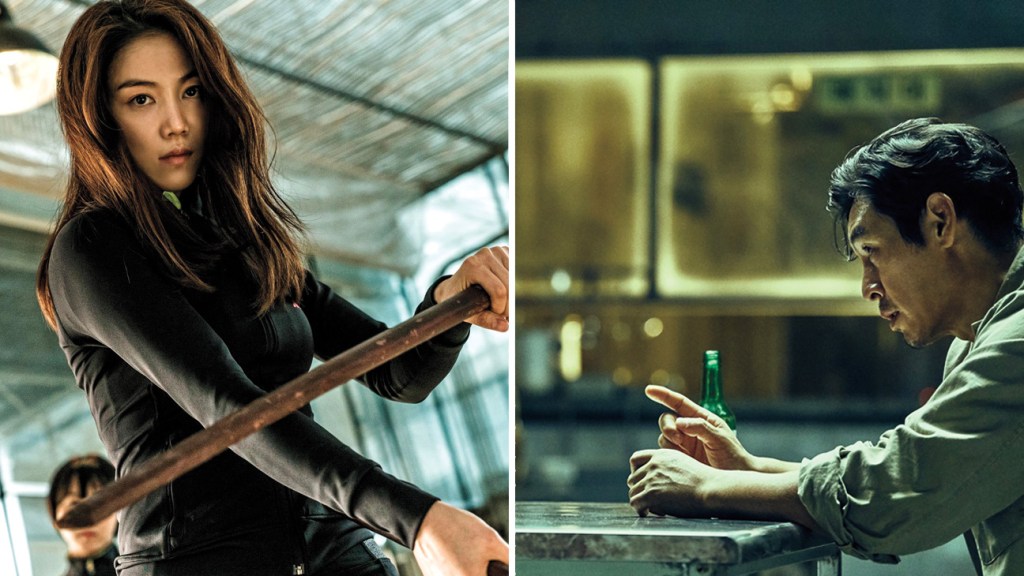 SPIES AND MOBSTERS AFTER DARK

The Villainess
Kim Ok-vin and Shin Ha-kyun, who both starred in Park Chan-wook’s 2009 Cannes Jury Prize-winning vampire thriller Thirst, reunite in Jung Byung-gil’s actioner. It has received much attention as a rare South Korean title with mainstream appeal propelled by a female protagonist. Kim plays the role of Sook-hee, who was raised as a killer. After taking revenge against her husband’s murderer, however, she falls unconscious. She wakes up to be scouted as a spy by the national intelligence agency. She refuses at first but decides to take the job when she discovers she is pregnant.

The Merciless
Pre-sold to France’s ARP and set for release across French theaters on June 28, Byung Sung-hyun’s  The Merciless has been creating buzz for starring veteran actor Seol Gyeong-gu opposite K-pop star Yim Si-wan. Seol plays a prisoner who takes a newbie (Yim) under his wing in order to expand his underworld influence beyond bars. While Korean art house films introduced through film festivals have traditionally made their way to French cinemas, The Merciless is the latest among an increasing number of big-budget, mainstream titles that are also receiving wide releases.

This story first appeared in the May 21 Cannes daily issue of The Hollywood Reporter magazine.