Robert Forster, the stalwart leading man whose Oscar-nominated performance as a bail bondsman in Quentin Tarantino’s Jackie Brown made for one of Hollywood’s most heartwarming comeback stories, has died. He was 78.

With his chiseled good looks, steely chin and earnest gaze, Forster exuded a raw truthfulness. He made his film debut opposite Marlon Brando and Elizabeth Taylor in John Huston’s Reflections in a Golden Eye (1967), then sparkled as an ethically challenged cameraman in Haskell Wexler‘s ultra-realistic Medium Cool (1969).

Forster then took on no-nonsense, heroic title characters on television to build on his stardom, portraying a dogged 1930s detective on NBC’s Banyon, which premiered in 1971, and a Native American police deputy in New Mexico on ABC’s Nakia, which bowed in 1974. However, the shows lasted just 15 and 14 episodes, respectively, before being canceled.

Forster captained a spaceship in Disney’s ambitious sci-fi thriller The Black Hole (1979), but it proved to be a box office disappointment. Other lowlights soon followed, including Alligator (1980), The Kinky Coaches and the Pom-Pom Pussycats (1981), Vigilante (1982), Hollywood Harry (1986) and Satan’s Princess (1989).

By the early ’90s, the actor was down to supporting roles in such low-budget efforts as Maniac Cop 3: Badge of Silence, Body Chemistry 3: Point of Seduction and Scanner Cop II and supplementing his income with speaking engagements.

“I went 21 months without a job. I had four kids, I took any job I could get,” Forster told the Chicago Tribune in 2018, raising and then lowering his hand to indicate his fortunes. “My career went like this for five years and then like that for 27. Every time it reached a lower level I thought I could tolerate, it dropped some more, and then some more. Near the end I had no agent, no manager, no lawyer, no nothing. I was taking whatever fell through the cracks.”

A fan of Forster since he was a kid, Tarantino had brought the actor in to audition for the part of aging gangster Joe Cabot in 1992’s Reservoir Dogs, but he had his heart set on casting Lawrence Tierney. Tarantino never forgot Forster, however, and as he was crafting the screenplay for Jackie Brown (1997) — an adaptation of Elmore Leonard’s 1992 novel Rum Punch — he wrote Max Cherry with him in mind.

“Years had gone by and I ran into him in a coffee shop. By then my career was really, really dead,” Forster recalled in a 2018 interview with Fandor. “And we blah-blah’d for a few minutes, and then six months later he showed up at the same coffee shop with a script in his hands and handed it to me.

“When I read it I could hardly believe that he had me in mind for Max Cherry, except that nothing else made any sense. So when I asked him about it, he said, ‘Yes, it’s Max Cherry that I wrote for you.’ That’s when I said to him, ‘I’m sure they’re not going to let you hire me.’ He said, ‘I hire anybody I want.’ And that’s when I realized I was going to get another shot at a career.”

In 2013, Forster was cast as the key Breaking Bad character The Disappearer in the AMC series’ penultimate episode, with the show’s team citing Max Cherry as an inspiration. He reprised the role in El Camino: A Breaking Bad Movie, which opened in theaters and hit Netflix on Friday.

Forster also portrayed Gen. Edward Clegg in the action film Olympus Has Fallen (2013) and its 2016 sequel and gave a stirring performance in What They Had (2018) as a distraught husband trying to care for his wife (Blythe Danner) as she battles Alzheimer’s.

Robert Wallace Forster Jr. was born on July 13, 1941, in Rochester, New York. His father worked as an animal trainer for Ringling Bros. and Barnum & Bailey circus. (As a nod to Forster’s dad, a circus poster is displayed in Max Cherry’s office.)

Forster attended the University of Rochester intent on becoming a lawyer, but those plans went awry. “I was a senior. I followed a girl into the auditorium, trying to think of something to say. They were doing auditions. This girl was already in the play. I said, ‘That’s how I’m gonna meet the girl!'” said the actor. The production was Bye Bye Birdie, and he got a spot in the chorus. He not only met the girl, June Provenzano, he married her, and they had three daughters.

After graduating in 1964, Forster headed to New York City and made his Broadway debut the following year in Mrs. Dally, a three-person play that also starred Arlene Francis and Ralph Meeker. He received a rave in the “Broadway Ballyhoo” column of The Hollywood Reporter, and that led to a screen test at 20th Century Fox. One of the last performers put under contract by studio chief Darryl F. Zanuck, he auditioned for Huston, who put him in Reflections in a Golden Eye.

In the movie, Forster portrays the free-spirited Pvt. L.G. Williams, who becomes the obsession of Brando’s Major Penderton and rides a horse in the moonlight and in the nude.

On the first day of filming, Huston told him to look through the camera lens. “You see those? Those are the frame lines. Now, ask yourself this: ‘What needs to be there?'” he told the Tribune. “So with that one piece of Zen advice, Huston gave me the responsibility and the authority to come up with what’s supposed to be in that frame.”

After guest spots on N.Y.P.D. and Judd for the Defense and supporting roles in the features The Stalking Moon (1968) and Justine (1969), Forster had his star-making turn in Medium Cool. The film, which dealt with government intrusion, race, the Vietnam War and the rising importance of TV news, became a touchstone for the cultural upheaval happening throughout America with its innovative blending of dramatic fictional footage with documentary images that Wexler had captured during the tumultuous 1968 Democratic National convention in Chicago. 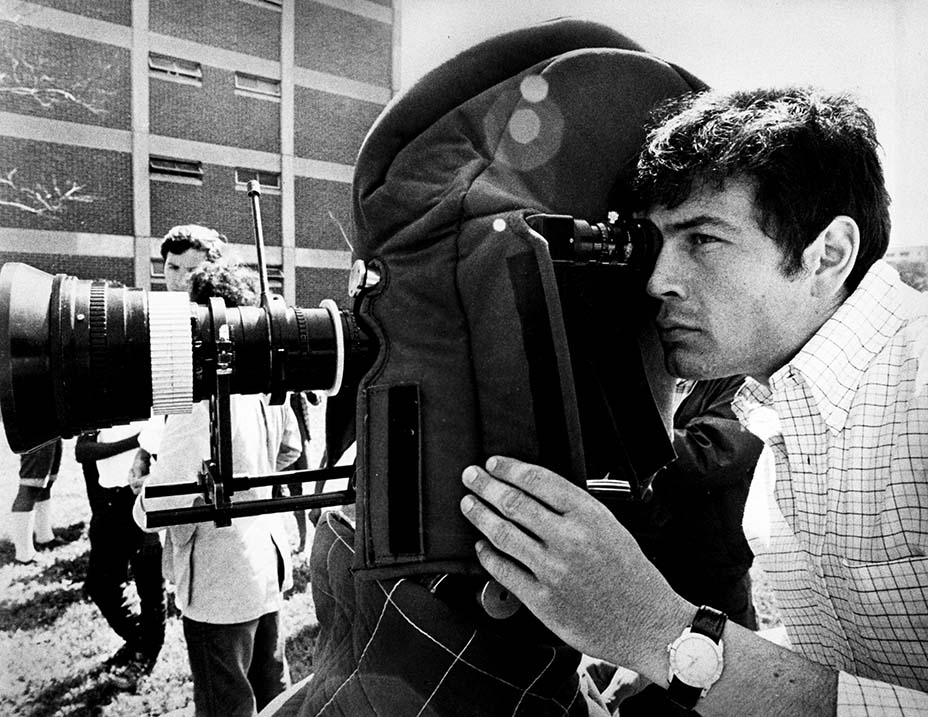 “That was all real stuff. That was, they tell me, the best or only real example of cinema verite in American film,” Forster told The A.V. Club. in 2000. “I think the phrase ‘The Whole World is Watching’ was coined at that exact moment, when the military was trying to separate the crowd from the press. They were pushing them, separating them, and the crowd was yelling, ‘Don’t leave us, don’t leave us, the whole world is watching.'”

Following Forster’s return in Jackie Brown (he lost out on the supporting actor Oscar to Robin Williams of Good Will Hunting), David Lynch tapped him to play Det. McKnight in the hypnotic Mulholland Drive. And when the filmmaker decided to revive his cult ABC series Twin Peaks in 2017, he called upon Forster to play Sheriff Frank Truman, brother of Harold Truman (Michael Ontkean in the original series).

Lynch “tried to hire me the first time he did Twin Peaks, but I was busy, I was doing something,” Forster told Vulture in 2018. “He is a very, very good guy. And when we did the second Twin Peaks, he was very generous to me and gave me the kind of part that I enjoy doing probably the best — a straight shooter, no nonsense, not a wild, offbeat character.”

Forster also kept busy playing recurring characters on Karen Sisco (as Carla Gugino’s father in another Leonard adaptation), The Grid, Huff, Alcatraz, Last Man Standing (as Tim Allen’s dad) and, as the patriarch of a family of supernatural beings, Heroes.

Forster played Sam Spade in a radio version of The Maltese Falcon in July on an outdoor stage in L.A.’s Coldwater Canyon Park as part of the TreePeople’s Once Upon a Canyon Night series. He made his first appearance there in 2004 and “would return almost every year after that, happily donating his time and talent to our theatrical readings,” a statement from TreePeople said. “He was a tireless supporter of our work and of the park, and as he told us often, he truly loved coming up each summer and joining in our fun.”

Survivors include his longtime partner Denise Grayson; his children Elizabeth, Bobby, Kate and Maeghen; and his grandchildren Tess, Liam, Jack and Olivia.

Forster said that when his career was at its lowest ebb, he had what he called an “epiphany.”

“It was the simple one,” he said, “when you realize, ‘You know what? You’re not dead yet, Bob. You can win it in the late innings. You’ve still got the late innings, but you can’t quit. Never quit.'”