Alex Honnold, star of the Oscar-contending doc Free Solo, is perched precariously halfway up an 85-foot wall. The seemingly superhuman climber who scaled a 3,000-foot sheer vertical wall in Yosemite National Park without any safety equipment is wearing a harness and tied into one end of a rope. In the unlikely event that he falls, the man on the other end, Jared Leto, will catch him. The wall arcs up and out at a steep angle — what rock climbers call overhanging — so a climber’s body is nearly horizontal to the ground. When it’s his turn to ascend the wall, Leto, breathing hard, is undeterred. “Nice, Jared, c’mon dude,” Honnold, 33, shouts, doling out lengths of slack in the rope. “Stay with it, I’m with you.”

Unlike the many people in Hollywood who have reached out to Honnold since the release of Free Solo, Leto, who fronts the rock band 30 Seconds to Mars and won a best supporting actor Oscar for 2013’s Dallas Buyers Club, has been climbing with him since 2015. Leto was working on The Great Wide Open, a series of five short films about national parks and the men and women exploring them, including Honnold. Shortly after they met, the pro climber took Leto up a classic mountain route called Matthes Crest northeast of Yosemite Valley. It was one of Leto’s first climbs, and they stayed out into the night. “We were just so psyched,” says Honnold. Leto, 47, remembers scrambling along a thin blade of granite toward the summit and nearly falling off. “There was one part where I grabbed on the end of a rope during one really slabby section,” he says. Leto continued to climb, and his friendship with Honnold grew. “I’m getting my ass kicked,” the actor says, “which is great.”

Leto makes a stealth appearance in Free Solo. Early on, filmmaker Jimmy Chin’s camera lingers on an unidentified man’s back as a disembodied voice (both belonging to Leto) asks Honnold if he would ever consider free-soloing the 3,000-foot granite monolith that is El Capitan, the mecca of the rock-climbing world. Honnold, of course, goes on to do just that, his ascent of El Capitan’s Freerider route without ropes or harnesses ranking as a nearly unparalleled feat of physical achievement. On Feb. 24, the National Geographic-sponsored team that captured the epic journey on film, including Chin and his co-director and wife, Elizabeth Chai Vasarhelyi, might be going home with an Oscar statuette. 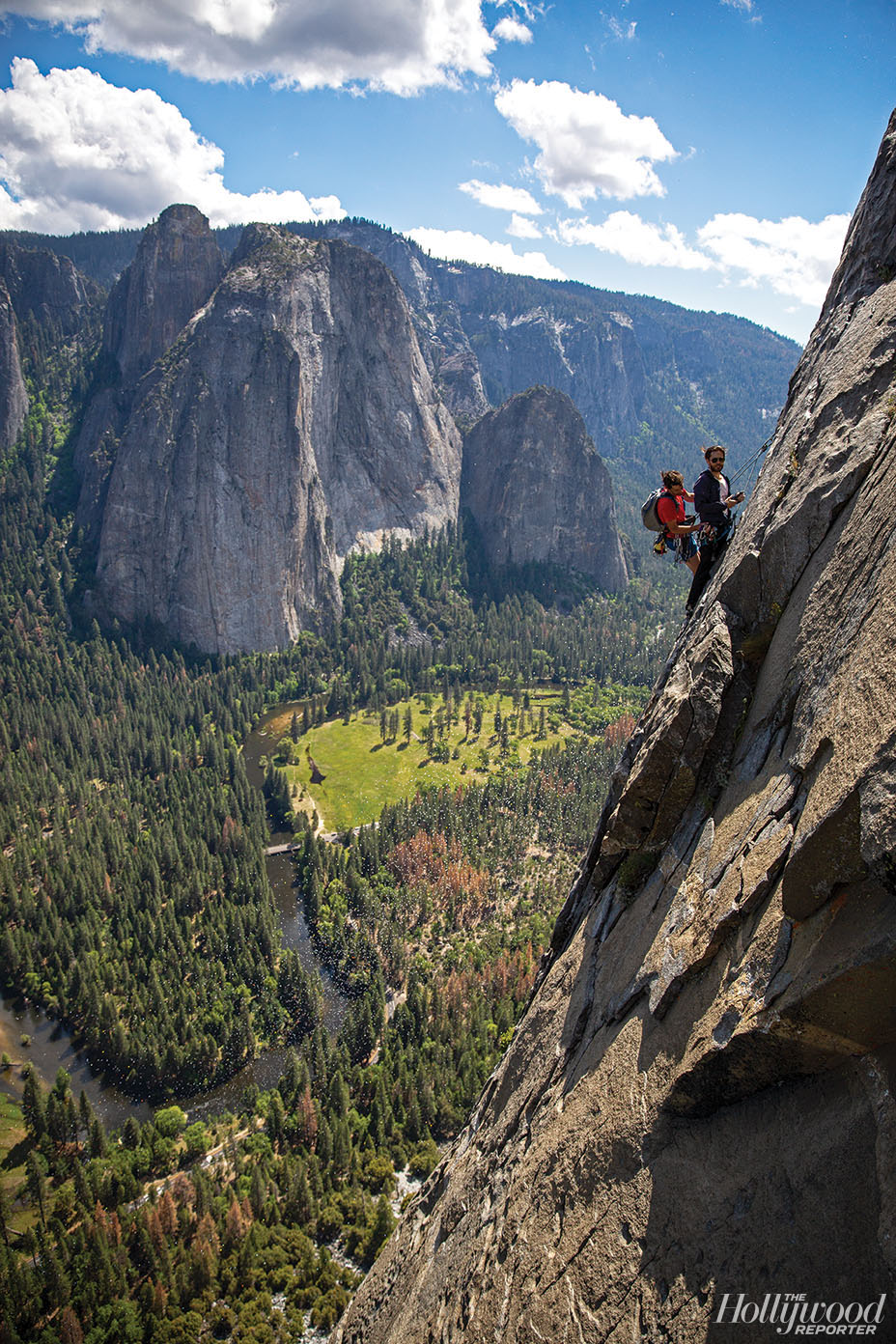 Free Solo has brought a slew of opportunities to Honnold. “It’s like a snowball going downhill,” he says. “And the film hasn’t even hit streaming yet.” In November, Honnold struck a multiyear brand ambassador partnership with car company Rivian, which considers Honnold a “superuser” because he lived in a van for so long. Rivian, which markets itself as the manufacturer of the “world’s first Electric Adventure Vehicles,” consults with Honnold on design. On Oscar night, Honnold is expected to show up in a Rivian R1T All-Electric pickup truck — and sport a custom-made tuxedo that The North Face is having made just for the occasion. (Honnold still uses the van that appeared in Free Solo for overnight climbing trips with his girlfriend, Sanni McCandless.) He has another ambassadorship deal with Beyond Meat, a company that makes plant-based products that resemble meat. He also has shares in the company, which could yield dividends when it stages its IPO soon. His nonprofit, The Honnold Foundation, which works on solar energy and aid projects for impoverished communities in the U.S. and abroad, has seen an uptick in attention and partnerships as well. 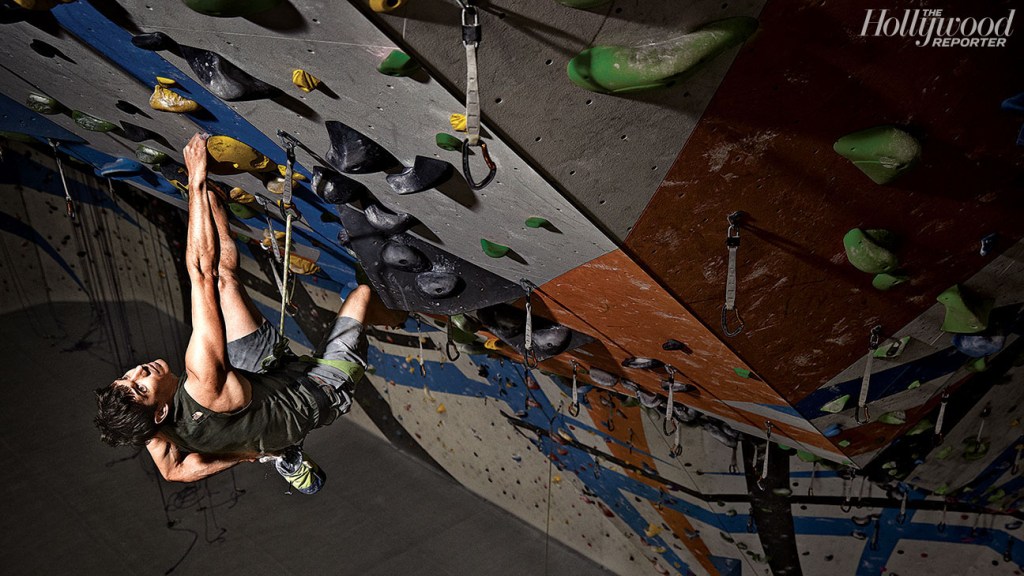 Black Diamond and Maxim sponsor his climbing gear. A company called Stride provides him with health insurance. Italian climbing company La Sportiva offers shoes, and Utah-based Goal Zero works with him to market solar chargers for phones. He gets paid handsomely to speak to investors and corporations, often repurposing a Ted Talk he gave last year about “mastery.” He’ll soon become part-owner of a national chain of climbing gyms, a speculative bid on an expected uptick of interest in rock climbing. Though he’s avoided the big-time exposure that comes with big-time sports brands, Honnold will almost certainly make seven figures this year and next. Says his manager at RXR Sports, Jonathan Retseck, “For rock climbing, that’s pretty good.”

One recent morning, before Leto arrived at the Sender One climbing gym in South L.A., Honnold reflected on this new phase as a half-dozen people snuck by to snap pictures of him. Hollywood, too, has shown intense interest: Honnold was game when Edward Norton’s agent got in touch about the two going climbing. (They haven’t yet.) He met Brie Larson, who also has climbed and was training for Captain Marvel, at an Antonio Banderas screening. “I loved Zorro as a kid, and [Banderas] was talking about one of the scenes where he was climbing on a beam and forgot to clip in, and he was like, ‘It’s like free soloing,’ ” recalls Honnold. “It was pretty classic!”

It may come as no surprise that the man who scaled El Cap without ropes is unfazed by the pressures of Hollywood. At the climbing gym, as Honnold completes a difficult boulder problem — just slightly harder than the famous karate-kick move shown in Free Solo — he says, “I don’t think any of it is that surprising if you think about it rationally. The scheduled time, the interviews, the publicists, being handled and stuff — it doesn’t feel like a healthy lifestyle, but that’s fine.”

Of the awards-season rush, “It’s obviously not how I would choose to spend my life,” he says, “and the idea that freakin’ actors do this for their whole careers blows my mind because it’s not that fun, you know? It’s really cool to meet these people that you’ve been inspired by, but you don’t actually hang out. It’s not quality time.” Leto, who walks into the gym wearing a Grateful Dead shirt and black pants, adds that he lent him a tux for the Producers Guild Awards. “He could barely move in the thing, and the shoes I think were probably too small as well,” notes Leto.

Since their first meeting in Yosemite, Honnold and Leto have climbed in Colorado, Nevada and in other places in California. “For the amount of time he’s been doing it, he’s actually phenomenal,” Chin says, bestowing on the Oscar winner an even greater honor: “He’s a climber.” 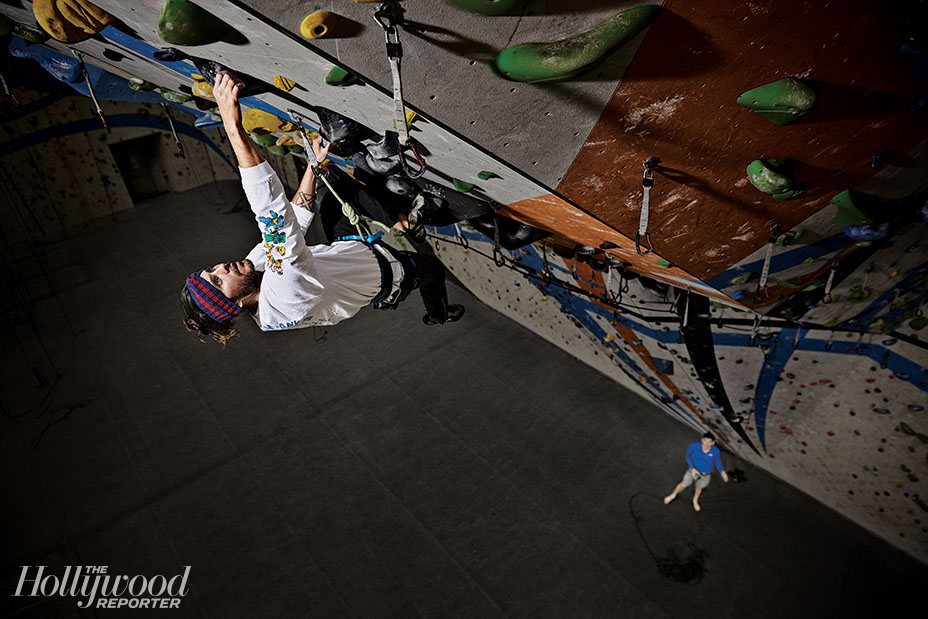 Later, Leto, who has put on 10 pounds since playing Dallas Buyers Club‘s transgender drug addict, shares that the physical change is part of preparation for his role as the archvillain in Morbius, the Marvel spinoff about the vampiric character. “The world’s most fearsome predator,” Leto quips. Warming up on a few moderately easy routes that snake up alongside Sender One‘s imposing overhang, Leto adds that he hopes to pack on 10 more pounds: “It’s great because I go from being very sick and very infirm to being strong and monstrous” in the movie. The friends have climbed at indoor gyms whenever the Las Vegas-based pro climber has been in town to promote Free Solo, and Honnold has been careful not to push Leto too far out of respect for his actorly obligations. “Jared’s climbing is not the most important thing for him, obviously,” he says, adding: “I think it would be cool to do stunts — I want to wind up as Tom Cruise’s stunt double, to do climbing in a movie. Don’t you think that’d be fun?” One of his early climbing heroes, a well-known Yosemite legend named Ron Kauk, climbed for Sylvester Stallone in Cliffhanger and for Cruise in Mission: Impossible II.

Understandably, most people still want to talk about Honnold’s ascent of Freerider, even though his climbing career has moved on in some ways, including a record speed ascent of another route on El Cap and an expedition to Antarctica. “But then I spend all day, every day, talking about the Freerider climb, so in some ways I haven’t moved past it at all,” he says. “It’s the first time in my life I’ve had that kind of weird disconnect between what I’m working on versus what I’m talking about.” 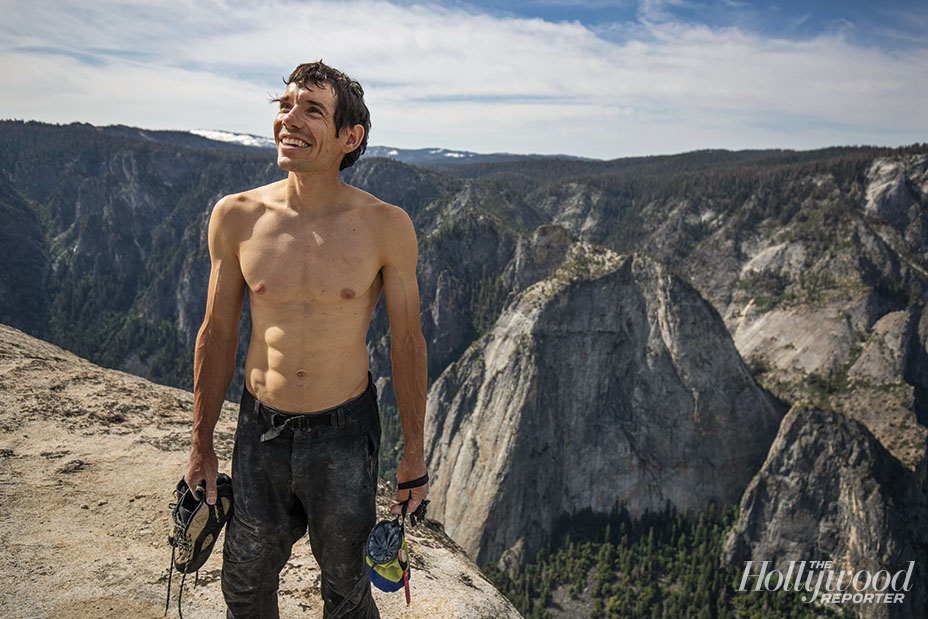 He hadn’t climbed outside in more than a month, and yet now, as he moves from bouldering to a few rounds on the hang bar to the overhanging wall, he seems content. “I feel surprisingly strong for the fact that I live in hotels now,” he says. Honnold and a friend have been toying with the idea of attempting a route somewhere on the Trango Towers, a massif of 20,000-feet-high granite peaks in northern Pakistan that has attracted top climbers for years. “I just want to get to the top of some of the most striking towers in the world,” he says. “Honestly though, we’ll see if it even happens because of scheduling.”

In other ways, Honnold’s life post-Free Solo has mellowed. He’s happily ensconced with McCandless at the Vegas home they purchased during filming of the movie. They climb together often. Co-director Vasarhelyi points out that Honnold has successfully managed to scale this emotional challenge. “They found love,” she says. “It’s a Shakespearean story, the little engine that could.” Honnold says the emotional drama of the documentary belies a more serene domesticity that he thoroughly enjoys. “You only see a few minutes onscreen, so it doesn’t show that you’re living together in harmony,” he says. “It only shows the moments of tension around this big challenge.” Still, it seems evident that conquering the solo climb has freed up something deeper in Honnold. Whereas in the movie Honnold was demonstrably uncomfortable when hugging his friend Tommy Caldwell’s kids, now he struts around the gym proudly holding Chin and Chai Vasarhelyi’s daughter, Marina, in his arms. They call him “Uncle Alex.”

Later, as he belays Leto, who scrambles up another route, a friend stops by to chat. Honnold asks about the friend’s romantic relationship. “It’s casual,” the friend says. “Is it consistent?” Honnold asks, and the friend nods. Honnold thinks on this for half a second. “Consistently casual is still consistent,” Honnold says, smiling. “After three great years with Sanni, I feel qualified to give relationship advice.” He says he wants a family and kids of his own one day. “Are you going to let them climb?” the friend asks. Honnold doesn’t hesitate. “I’m sure my kids will grow up underneath the moonboard in my home.” For someone who has explored the most extreme corners of what’s physically and psychologically possible, Honnold seems keen to resume a life of normal pleasures. “As soon as the Oscars are over, he’s going to be itching to get in a van with Sanni and go on a climbing trip and life as usual,” says Retseck. Leto reaches the top of the wall. Honnold brings him down, they laugh, and move on to the next route. 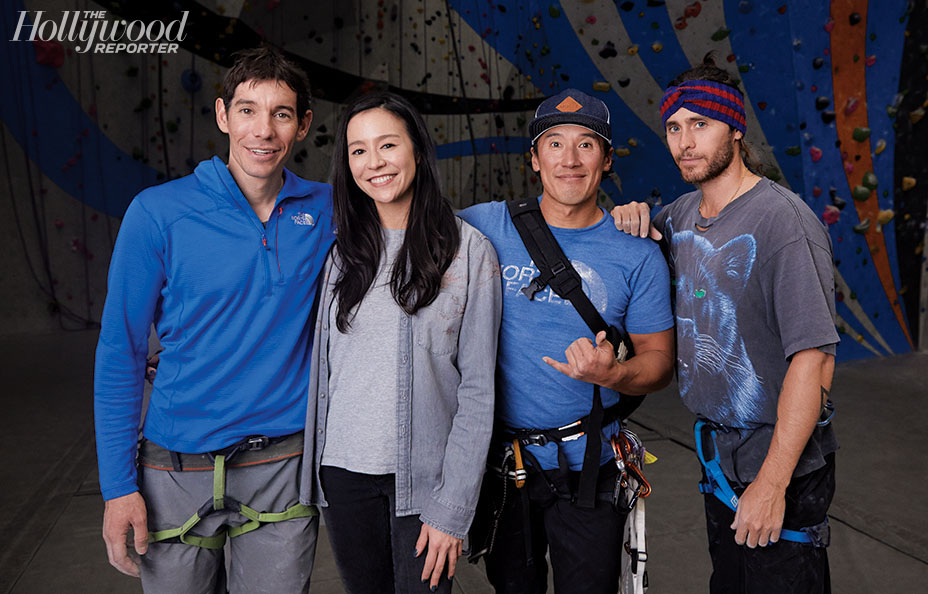