When Ronan Farrow sat down to interview Rose McGowan on Thursday night, he opened what would go on to be a 90-minute, emotional conversation by saying that he and McGowan do not do small talk. “How are you, Rose? And you know me well enough to know that I don’t mean that casually,” Farrow asked McGowan when the pair took the stage at New York City’s 92Y in front of a packed audience.

McGowan acknowledged that question is one she has been asked constantly, but struggles to answer. So she decided to compare how she fits into the current climate by doing what most people do, and likening her situation to the movies.

“Right now it feels like a cross between A Space Odyssey — that was when Ronan, his beauty and his mind and his tenacity and his grit, helped destroy very much what you know. When the movie gets to the Jupiter section and all of a sudden it’s graphics and nobody has been there,” she said. “But then we cut to Superman 2. There are these three bad characters, who are of course dressed in all black, and they land there with a thump on the earth. And that’s how I feel with the book [Brave] coming out — I came through the atmosphere with a thump.”

McGowan said her new reality includes crying a “couple of times today” because “she has to.” Likening what she has been through to going through a war, she added, “There’s not enough time to process.”

The #MeToo activist, who has accused Harvey Weinstein of rape and was “instrumental,” to quote Farrow, in the current national reckoning on sexual harassment, has been making the rounds to promote both her new memoir, Brave, and E! docuseries Citizen Rose. Both projects reveal new details about her Weinstein allegation, and explore her difficult upbringing and eye-opening Hollywood experience.

When she sat down to be interviewed by Farrow — the renowned journalist who himself has been instrumental in bringing the #MeToo movement to light — the pair discussed the timeline that kicked off a worldwide chain of events.

“Rose was telling this story to reporters much earlier than this was made public,” Farrow explained of filming McGowan around one year ago in January 2017 — long before the first story broke about Weinstein in the New York Times on Oct. 5 — about her claim that the disgraced Hollywood mogul raped her in 1997.

The onstage pair who now know each other well, went back and forth ironing out the reasons why McGowan did not give Farrow the okay to use her on-the-record rape claim at the time. Farrow said she was spending money on legal fights with Weinstein and his team over her claims and bowed out. McGowan agreed to having legal bills to pay, but had a slightly different story to tell.

“NBC was not the right place, it was never the right place,” she said, referencing the fact that NBC passed on airing Farrow’s Weinstein exposé, which went on to run in the New Yorker on Oct. 10 and in subsequent investigative pieces. McGowan said that in addition to speaking to Farrow, she was also talking to the Times. “I needed to get two newsrooms in a fight, because I had lost out by men having ego contests for years. I had to use that angle.” Farrow added, “It worked. It got the story out.”

As has now been reported by Farrow, and discussed by McGowan in Citizen Rose, Weinstein had hired private investigators to discredit his accusers and journalists attempting to report the story. Now, months after McGowan broke her silence to go public about Weinstein, the actress claims Weinstein is still “going after her.” She said someone was recently offered a significant sum to tell the press what hotel room she was staying in, and that an altercation during her New York City book signing the night before with a transgender woman was between her and a “paid plant” who was sent there to engage in a screaming match.

“Who else cares? Who else is going to stalk me?” she asked. In response, Farrow said he could not comment about “ongoing” reporting. (A rep for Weinstein told THR of the book signing incident: “That’s absolutely 100 percent false. No one is monitoring her whereabouts. It’s unfortunate that she is choosing to marginalize a community that is fighting to have their voice heard by claiming that the individual was a ‘plant’ of my client. It’s simply untrue and disrespectful to the transgender community.”)

Weinstein had released a new denial about McGowan’s claims on Tuesday, a move that McGowan called “sad” and “pathetic” in a statement. “It feels violent; it feels degrading,” she now adds. “I don’t know what it’s like to get to face down my attacker in court, but I do know that they lie.”

In both her book and in her docuseries, McGowan omits Weinstein’s name, referring to him as “the monster.” She refrained from saying his name on the Thursday panel as well. Ahead of Citizen Rose‘s launch, some critics had questioned why the powerful and personal story found a home on Hollywood-centered network E!. McGowan quoted philosopher Marshall McLuhan to say “the medium is the message” and explain why producer Andrea Metz, who has also worked on the Kardashian franchise, was the right fit, instead of bringing the show to a HBO or Netflix. “I really believe in being egalitarian,” she said. “E! has the farthest reach.”

Several times throughout the interview, especially as Farrow brought up McGowan being subject to abuse her whole life, the actress was brought to tears. When talking about pushing back against Hollywood’s image of beauty, something she details in her book, she lost her train of thought because she “got so sad.” Growing up in a cult, the Children of God, she said she looked for weapons in every room to protect herself, and admitted that it’s an instinct she still has.

Then Farrow brought up a new statutory rape claim, informing the audience that McGowan has also told him that she was assaulted by a “prominent” man in Hollywood long before Weinstein when she was 15. Farrow says he knows the man’s identity and asked McGowan if she was ready to come forward.

Adding that it’s a “timing thing” in regards to being ready to identity the “very famous” man, McGowan explained that she actually hadn’t realized that she had been molested until two weeks after Farrow’s story first broke about Weinstein.

She said he left her standing on a street corner. “In my mind, playing it back, I had been attracted to him, so I always filed it away as a sexual experience.” She then said to Farrow, “I don’t have a normal trajectory, I don’t know if you do either.” The son of Woody Allen related to her, saying, “I do not.”

McGowan said that until she started processing what had happened last fall, she always thought of the situation as, “That creep did this to a 15-year-old.” Adding, “It was not until two weeks after your story broke — our story, our world’s story — that I was in bed and I started saying, ‘Oh my god. I think that’s molestation.'”

Farrow pointed out the bold line in this situation since McGowan was underage, and then segued into some of the grayer areas that have been debated in recent media conversations, sparked by stories like that of Aziz Ansari and where innocent situations could potentially become something else when revisited.

Farrow provided some insight into the New Yorker newsroom conversations about using the word “rape” in their reporting, ultimately deciding that it is deceptive to readers to use a word like “misconduct” if the claim is by legal definition a rape. That is an example of how sexual harassment and assault is being reported differently compared to not too long ago, when Farrow was reporting on allegations against Bill Cosby and accusers weren’t being believed in the way they are now.

He asked McGowan what she attributed to the change.

“Anger. The permission to have a voice,” she said. “Also, I think Trump. It was for the liberal men finally realizing, ‘Is this what that is?’ Yes, that’s what that is. It became harder to lie about it to themselves. It became so obvious, so blatant that it helped reframe.”

Despite the wave of change, McGowan stood by her previous criticisms of the Time’s Up initiative and some of the women involved, like her former Charmed co-star Alyssa Milano [McGowan called her a “lie” on Nightline.]

“It’s a great slogan. The problem that I have with it is there are CAA agents behind it. How are those people at CAA going to find farm workers?” she asked of the fund’s donation plans. Farrow acknowledged that other women he has spoken to have agreed with McGowan’s opinion that the fund is a “smoke screen” for some of the men on the board.

“They are dirty people, they are bad people,” McGowan said, sharing personal sexual harassment claims about two of them without identifying who the claims were about. She didn’t include those stories in her book, she said, because she’s about bigger things and doesn’t “fuck with low-level shit.” Adding, “For every one of these guys who has fallen, I know so many more.”

Farrow didn’t shy away from hitting McGowan with hard questions, including her relationship with the LGBTQ community and the drug charges she is still facing in Virginia. Cocaine was found in McGowan’s wallet that was recovered at the airport when she flew to the Women’s March last January, and she films turning herself in on Citizen Rose.

“I hate that handcuffs have been on me and not him,” she said, referencing Weinstein. She added through tears, “When they slapped those handcuffs on me, they were cold and heavy. I had a plan for my mugshot of looking tough. I was not in my body. When they did that, I did what I did when I was raped, I floated above. In that photo, I am literally not there. And I knew that was probably the expression when that happened to me. There must be some kind of justice.”

Throughout the conversation, which elicited several moments of cheers and applause, McGowan also hammered home her opinion about critics: She doesn’t care what people say.

“I’m not here to defend myself to people. Don’t believe me, you don’t have to, you just have to think,” she said of her Rose Army message. “I survived. I have had to protect myself. I live between worlds, not in yours and not in theirs. There is no soft spot right now. There is no soft space to land.” 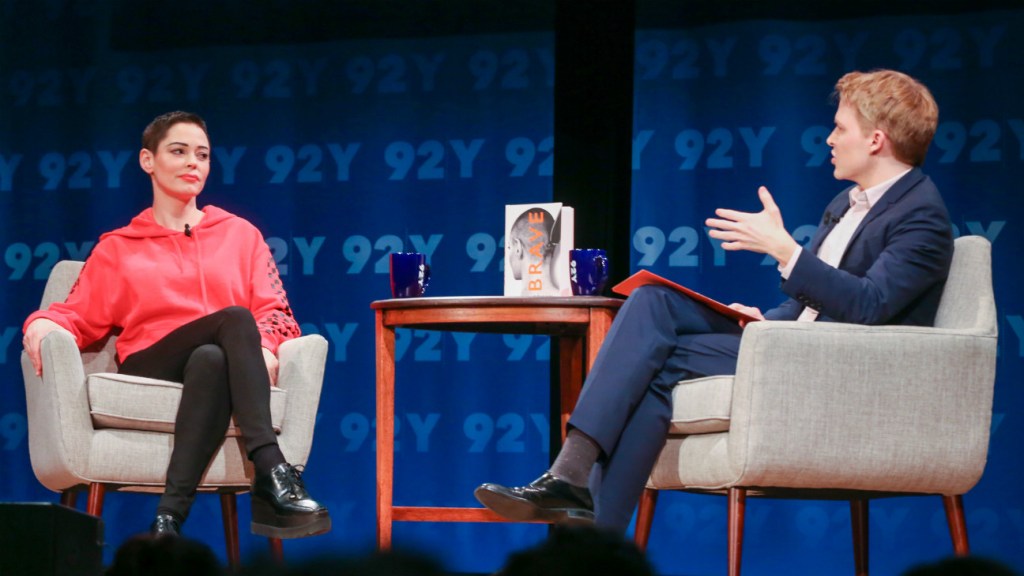