The trailer for the 1955 film adaptation of Tennessee Williams’ The Rose Tattoo, which won Anna Magnani a best actress Oscar, proclaims: “Will leave its imprint forever. With the memory of its seething violence! Its lusty drama! Its startling frankness!” Even if the typically emphatic hyperbole of that era’s movie marketing oversells it, a disconnect as big as the Gulf of Mexico separates those claims from this wobbly Broadway revival, which tackles the problem of a dated melodrama by playing up the comedy at the expense of any real feeling.

But director Cullman has no feel for the tricky brew of pathos, passion, poetry, humor and clunky symbolism required of this second-tier Williams work. Instead, it’s shrill and hysterically over the top, poorly paced and blighted by some very large Italianate acting with all the authenticity of an Olive Garden chicken alfredo. Troppo is the word that comes to mind.

Williams’ prolix introduction to the published text is a prime example of how one of America’s most celebrated 20th century dramatists could bury himself in ponderous waffle. The purple essay addresses time and impermanence, the violence of Greek tragedy and the contemplation of repose, none of which has much relevance to The Rose Tattoo, at least not in terms of how it holds up almost seven decades later. 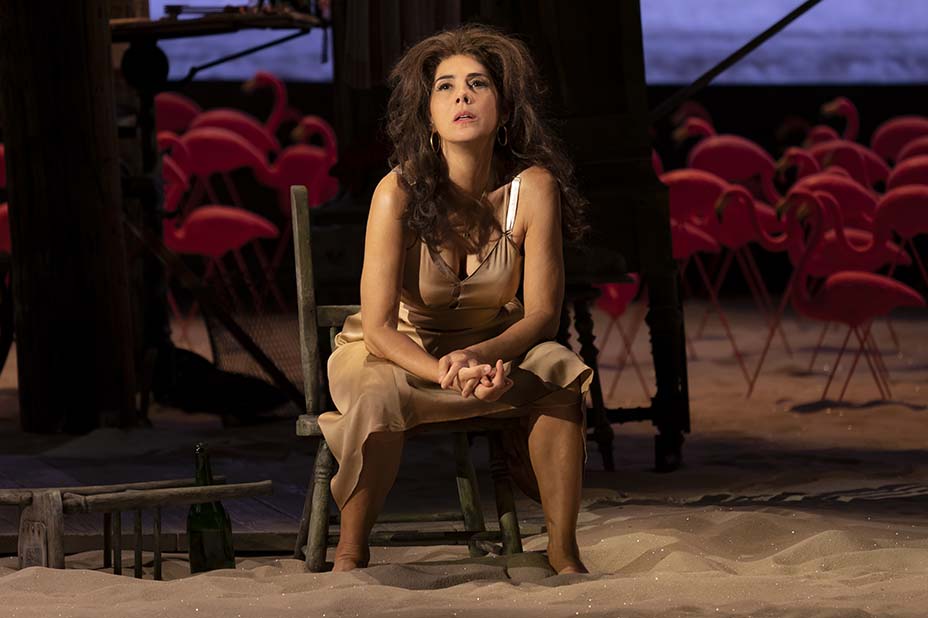 The playwright states that the continual rush of time “deprives our actual lives of so much dignity and meaning, and it is, perhaps more than anything else, the arrest of time which has taken place in a completed work of art that gives to certain plays their feeling of depth and significance.”

If Cullman was aiming to freeze time in a dream reality, he misses that mark in this tonally helter-skelter production, starting with the eyesore of Mark Wendland’s set design with its awkward spatial dynamics.

The coastal cottage where Serafina lives and works as a dressmaker is represented without walls, as a clump of furniture, including a shrine to the Virgin Mary and the basics of a sewing room, that sits not quite center-stage, with a sofa and table way off to the side. The yawning space between is echoed by an endless lateral runway that makes every entrance and exit seem like a trek and requires the actors to duck their heads to avoid getting brained on the way out. Elements of the design might have worked on a smaller stage, but that still wouldn’t explain the dozens of plasticky pink flamingos lining the video shoreline, which look like they were repurposed from a Kmart resort-wear display.

Onto this visual mess, Cullman unleashes Sicilian widows singing folk songs and a bunch of noisy kids running riot, often chased by a cackling crone wearing an eye patch, known to the locals as La Strega, or witch (Constance Shulman, who deserves better).

Serafina, gussied up like a proud wife who lives to please her husband, confides in her old apothecary friend Assunta (Carolyn Mignini) that she’s pregnant with their second child. (While Serafina admits she was a peasant, her claim that her truck-driver spouse Rosario was a baron in Sicily has earned her the somewhat mocking nickname of “La Baronessa” from the gossipy women in the village.) She also confesses to Assunta that hidden beneath his truckload of bananas, Rosario smuggles black-market goods interstate, and his earnings will soon have them living in style in their own house.

But a visit from willowy Texan blackjack dealer Estelle Hohengarten (played by Tina Benko like she’s auditioning for RuPaul’s Drag Race) with a commission to make a man’s shirt out of fuchsia silk, hints that Rosario — he of the rose tattoo — might not share Serafina’s marital devotion.

When news arrives that Rosario has been killed, Serafina suffers a miscarriage and retreats into near isolation. Three years later, she’s still mired in grief, traipsing around the house like an unkempt slattern, wailing at the Madonna and shutting out rumors of her husband’s infidelity. But she keeps suffocating watch over her budding 15-year-old daughter Rosa (Ella Rubin), extracting a promise from the spirited girl’s nervous sailor boyfriend Jack (Burke Swanson) that he will respect her virtue. 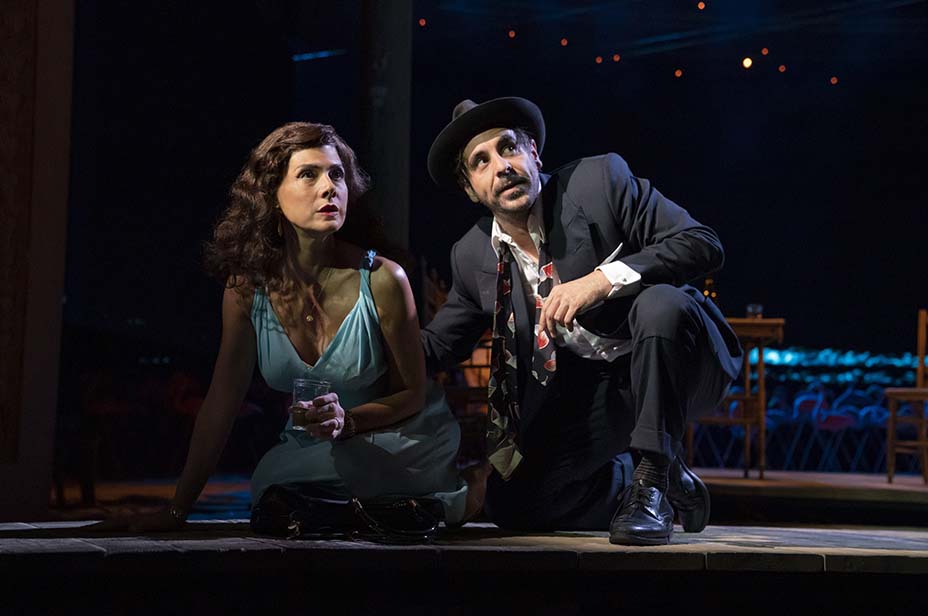 All that takes place in an unwieldy first act that culminates with Serafina doing an animal-esque dance to convey her unhinged refusal to play the respectable widow. Tomei certainly commits to the role and doesn’t stint on the hot-blooded volatility, but she never seems an ideal fit — and not just because she’s not the plump woman described in the script. Williams wrote Serafina for Italian star Magnani, who felt her English wasn’t up to it at the time and agreed to play the part only later onscreen. Maureen Stapleton originated the role on Broadway and Mercedes Ruehl played her in a well-received 1995 revival. Those actresses share a fire-breathing force-of-nature unpredictability that could measure up to even the most florid stretches of Williams’ writing. Tomei often seems to be merely assuming volcanic attitudes and is at her best in the more playful stretches, where her expert comic timing comes into effect.

That happens in the second-act encounter with Alvaro Mangiacavallo (Emun Elliott), a clownish Dionysus whose physical resemblance to Rosario breathes new life into Serafina’s love-starved loins. Like her deceased husband, Alvaro is a libidinous Sicilian truck driver, and if he’s somewhat transparently looking for an easy escape from his thankless reality, his slapstick courtship nevertheless provides Serafina with a motivation to move on with her life.

The representation of passion as a path to rebirth makes this a departure from the fatalistic romantic fantasies of classic Williams dramas like A Streetcar Named Desire or The Glass Menagerie. But even as a curio among the playwright’s work, the overripe and yet awfully thin folkloric fable sparks minimal interest in a production of such strained vitality. While the combustible desire between Serafina and Alvaro yields its share of laughs thanks to the physical comedy of Tomei and Elliott, the rest of the ensemble is all over the place under Cullman’s alternately sluggish and feverish direction.

Talented actors are either wasted, like Cassie Beck as a spinsterish schoolteacher, or misused in arch characterizations, like Benko, Shulman and Greg Hildreth as the traveling salesman who inadvertently brings Alvaro crashing into Serafina’s broken life. Newcomers Rubin and Swanson are adequate at best as the young lovers, making that subplot an uninvolving dawdle. ­­But the actors are less to blame than the busy direction, which fails to create a unified whole out of the play, lurching from tragedy to turgid melodrama to opera buffa. It’s hard to share Serafina’s rediscovery of her joy and sensuality in a clumsy production that strips her of the “dignity and meaning” Williams intended.