On a Wednesday evening in West Hollywood, Russell Simmons’ Tantris Center for Yogic Science (and retail store!) is humming with activity. Practioners come and go up the mantra-covered stairway, which leads to the infrared heated hot yoga studios, tuned to a precise 63 percent humidity. Others mingle in the in-house salon, adjacent to the retail space, where clients can find pieces from Simmons’ Tantris athletic collection as well as a copy of The Yoga Sutra bible, which Simmons praises for presenting the real science of happiness.

The center, located on the ground floor of the same building that’s home to Soho House, hosted a special class in advance of project:OM, a nationwide event taking place throughout Mother’s Day weekend (May 12-14), which aims to get more than 1 million users to hit the mat as both a celebration of yoga and a means to raise awareness and funds for breast cancer.

The event is the brainchild of yoga apparel and accessories brand Manduka, which has organized more than 750 classes nationwide and has multiple partners, including YogaWorks, Yoga Six and Simon Malls. The free classes have a suggested donation of $10, and 100 percent of the proceeds will be donated to the Susan G. Komen organization.

“Loaning my celebrity and my studio [to the cause] is why we’re here,” said Simmons of his involvement in the project.

The ethos echoes Simmons’ own staunch commitment to the spirituality of the studio, which he opened in November and counts Lady Gaga, Usher, Jessica Alba, Alex Rodriguez, Nick Cannon and more A-listers among its clients. Whereas other yoga studios in uber trendy West Hollywood will calculate the calories burned or tout their impressive abs, for Simmons, the physical is secondary to the spiritual benefits of yoga. 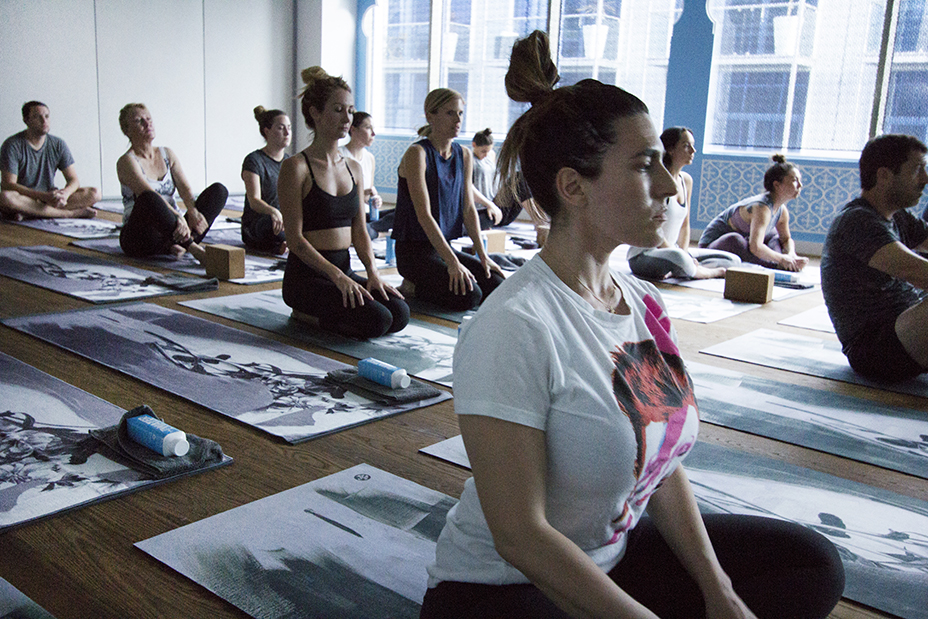 “Of course you lose a lot of weight, and you’re in better shape,” he said, guffawing at the idea of a toned rear or beach-ready body as proper motivation for taking up the practice. “But I don’t talk about that. All that stuff that comes from the physical practice of yoga is good, but to be comfortable in your seat is the goal,” he continued.

The loquacious Def Jams Records co-founder spoke emphatically about the benefits of meditation, positive thinking (“A noisy mind is sadness and sickness. A quiet mind is happiness and bliss”) and his veganism, adding that the majority of America’s consumption habits are contributing to “the worst karmic disaster in the history of the world.”

His ardent speech, as well as his relentless insistence that this writer take a post-interview class (“If I buy you an outfit, will you try it?”), was interrupted several times as teachers and clients alike passed by Simmons’ perch on a fluffy red bean bag chair in the lofty second-floor lounge.

As to be expected, everyone recognized Simmons, but the hip-hop mogul, who stops by Tantris twice a day for classes, recognized everyone else as well. Mid-interview, he turned to a patron exiting the studio. “How was class, man?” he asked. In response, the sweaty blond man in a gauzy white top kissed his fingers like an Italian chef who’s just created a masterpiece.

“For me it’s about building community,” said Simmons, turning back to our interview. “Our goal here is to promote happiness and well-being for others. That’s our job.”