Ryan Murphy, the prolific showrunner and director, is the guest editor of the first-ever Pride Issue published by The Hollywood Reporter. Kicking off June Pride Month, the issue honors Hollywood’s 50 Most Powerful LGBTQ Players and includes out cover stars Cindy Holland, vp content at Netflix; Pose and Hollywood writer-director Janet Mock; actor-producer Jim Parsons, who next stars in Murphy’s Boys in the Band film; Pose star Billy Porter; Pose co-creator Steven Canals; Amandla Stenberg, star of Netflix’s The Eddy; and Saturday Night Live castmember Bowen Yang, all of whom were photographed for the issue at a safe distance.

Since he first entered the public consciousness in 2003 with Nip/Tuck, followed by hit high school series Glee in 2009, guest editor Murphy has been at the forefront in the fight for LGBTQ representation. Through his projects — including American Horror Story, American Crime Story, Scream Queens, Feud: Bette and Joan, The Politician, Hollywood, Pose, The Normal Heart and the upcoming Boys in the Band — the writer-director-producer-activist has brought gay culture to the mainstream, exploring complex LGBTQ relationships in fresh iterations. He has also provided platforms for many of today’s stars, including Porter, Ben Platt, Sarah Paulson, Canals, Jane Lynch, Chris Colfer, Indya Moore and Mj Rodriguez.

By dint of his $300 million deal with Netflix in 2018, Murphy has broken the ceiling for what a gay creator can do in the entertainment industry. “Ryan Murphy is not only one of the most prolific showrunners who champions telling LGBTQ stories, he’s also a former journalist, so we knew he’d have insights and ideas like few others for The Hollywood Reporter‘s inaugural Pride issue, including looking at how coming out has changed over the years,” says THR deputy editor Degen Pener of the magazine bringing Murphy on board. 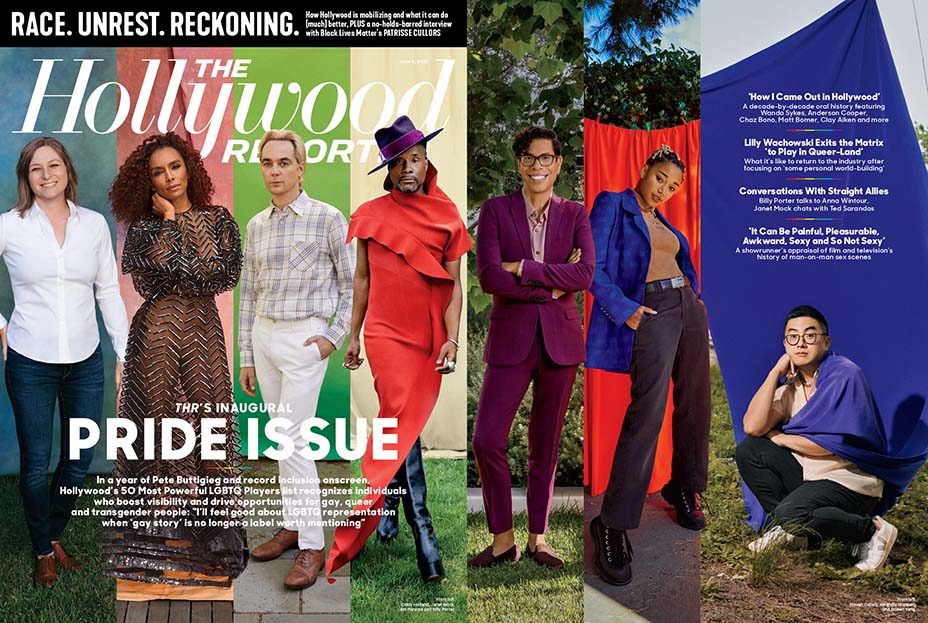 Murphy curated a conversation series for the issue between out talent and straight allies in which Porter speaks with Vogue editor-in-chief and Condé Nast artistic director and global content adviser Anna Wintour — and in which Mock speaks with Netflix chief content officer Ted Sarandos about the entertainment company’s commitment to LGBTQ inclusion (including Mock’s landmark overall deal at Netflix in 2019, the first trans person to do so at a major media company). Says Mock, “I recognize that my talent and tenacity brought me here, but it’s the intentional work of those people who came into my life at the exact right time, like Ryan [Murphy], and not only believed in my vision and my voice, but also did the work of saying, ‘Come on, girl, I’ll show you the way.'”

In a story looking back on the collective Out There, a group of producers, executives and representatives that formed in the 1990s to push for projects spotlighting LGBTQ characters and storylines, Murphy recalls, “I think because all of us had grown up with the AIDS crisis and had lived our lives in so much fear, we were at the point where we weren’t willing to give in.” Adds Color Force producer Nina Jacobson, one of the co-founders of Out There and one of the people named to THR’s 50 Most Powerful LGBTQ Players list, “Although he has certainly been recognized for it, I don’t think you can overstate how much Ryan Murphy has done to create aspirational LGBTQ characters and to cast and hire LGBTQ people.”

The 50 Most Powerful LGBTQ Players in Hollywood