Merv Griffin always said that his path to achieving longevity in our business was doing more than just hosting a show,” says Ryan Seacrest, one of Hollywood’s most fluid multihyphenates. “That stuck with me.” So, while American Idol still was reaching 30 million viewers a week, he parlayed a 2006 contract with E! News into a deal that set up Ryan Seacrest Productions. Ten years and eight Kardashian-fronted series later, RSP boasts 40 full-time employees, a roster of six reality shows and Jennifer Lopez drama Shades of Blue, and advantageous pacts with Endemol Shine and CBS Studios (unscripted and scripted, respectively). With the Kardashian “mother ship” still going strong, an average 2.7 million viewers in its 12th season and a new spinoff (Rob & Chyna) dominating E! originals ratings, Seacrest, 41, reflected on the evolution of his successful side hustle, what he has learned from the red carpet — awkward encounters included — and that cryptic comment he made during the Idol finale.

How did Keeping Up With the Kardashians become your producing foray?

I was inspired by watching The Osbournes at the time, so the first thing that interested me was finding a family. Kris Jenner, at the same time, was looking to do a show. I remember telling [producer] Eliot Goldberg, “Let’s go up to their house and shoot a barbecue just to see how they interact.” He said, “Great, but we don’t own a camera.” 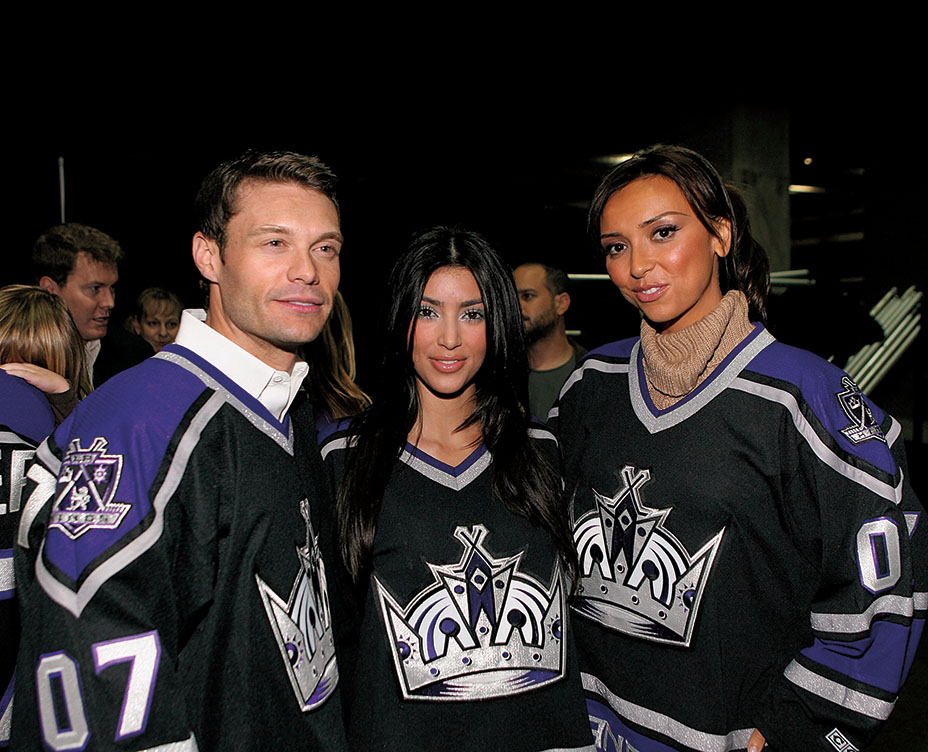 Was the footage an easy sell?

Not as I remember. You know how these meetings go … “Thank you very much. This could be great. We’ll let you know.” But we pushed on and got it to [then-Comcast Entertainment Group CEO] Ted Harbert, who gave it the green light. He was extremely passionate about it. But we had no Avids or a facility to produce the show. It was just me and Eliot. [Former E! originals executive vp] Lisa Berger was fond of Bunim/Murray Productions, and that’s how we connected with them.

You just launched another spinoff, Rob & Chyna. Almost a decade in, why do the Kardashians still pull in the ratings?

There is always something new going on in the family — a new person, a new marriage, somebody that’s left the family. There was Bruce. And then there was Caitlyn [Jenner]. There just is no shortage of compelling storylines with that family. There was a real candid conversation at the beginning. If the family was going to do this, it would be as aspirational and as pretty as it could be, but it also would be vulnerable. I think they deliver that.

When did it hit you how famous the family had become?

When I started seeing them on the cover of every single magazine, every single week. They still are to this day, and it has been going on for years. And now what I notice is that they are globally more famous than five years ago. They are on the cover of magazines abroad, too. 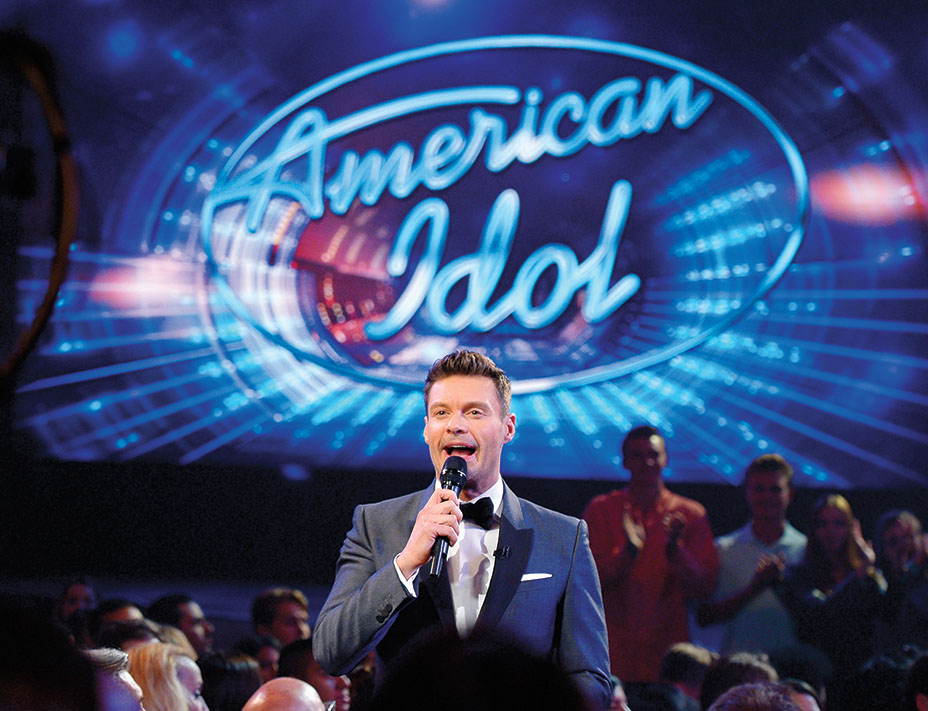 KUWTK production paused after Kim’s robbery in Paris. Do you know when she’ll resume filming?

I’ve connected with Kim, and I’ve spoken in detail with Kris. Obviously, our biggest concern and priority is her safety and well-being. That’s really the only thing we’re focused on right now. It’s very scary.

Why haven’t docuseries worked on broadcast the way they do on cable?

It’s almost as if the business is conditioned not to put them on broadcast, so they don’t. The cost efficiencies and economics are different as well. I think the cable model lets these shows work. You can rerun them a lot. When you look at how many episodes of Keeping Up With the Kardashians have aired on E! … it’s like millions at this point.

The access Endemol Shine has is incredible. There are two that we are in development on that are particularly interesting. I’d like to bring a big game franchise back to primetime.

You have your first second-year scripted series with Shades of Blue. Is there an ideal ratio of scripted to unscripted for RSP down the line?

The ideal ratio is hits. I like hits. The scripted division is younger, but that has been really great. Scripted shows … those generally take a little bit more time to get up and running. But I would like a healthy slate on each side.

How does one convince Jennifer Lopez to do 13 hours of a broadcast drama?

You’ve got to be really good. She’s one of the hardest, smartest working people that I’ve ever spent time with. And I think she sees the value in being a star on broadcast television each week. She certainly saw the value of Idol. But she’s busy, so it wasn’t easy. 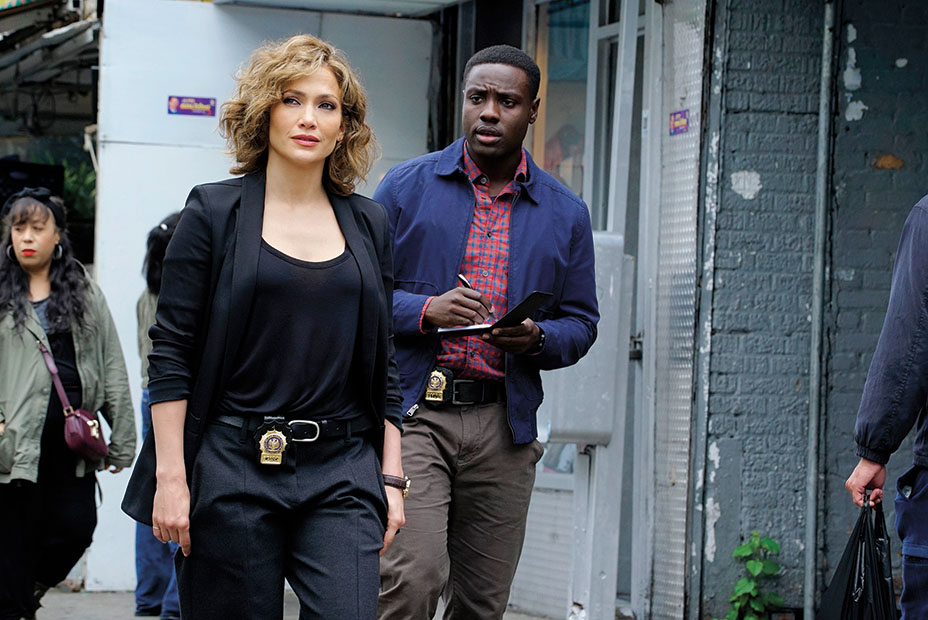 You’re busy, too. What is the appeal of still being on the radio every day, when you could focus on other things?

It helped me get to where I am, and I am almost fearful of not doing it for just that reason — that I wouldn’t be as sharp or as good as I can be on my other projects. Plus, it reaches 22 million people a week.

What has producing red-carpet specials taught you about Hollywood?

That’s some of the hardest work, actually. You have absolutely no idea who you are going to talk to — but you get a list of 100 to 150 people. I study flash cards about them, so I know three things going on in their world. That way you can have an interesting one-minute conversation. My first Golden Globes, I was just tossed down to the carpet to do the interviews. I didn’t think I was going to be good at it.

Do you have any particularly awkward red-carpet moments?

Sacha Baron Cohen threw pancake mix on me at the [2012] Oscars. That was unconventional. There was a moment where Gary Busey came running up to me when I was speaking with someone else. I don’t think he realized we were on television and he was … spirited. 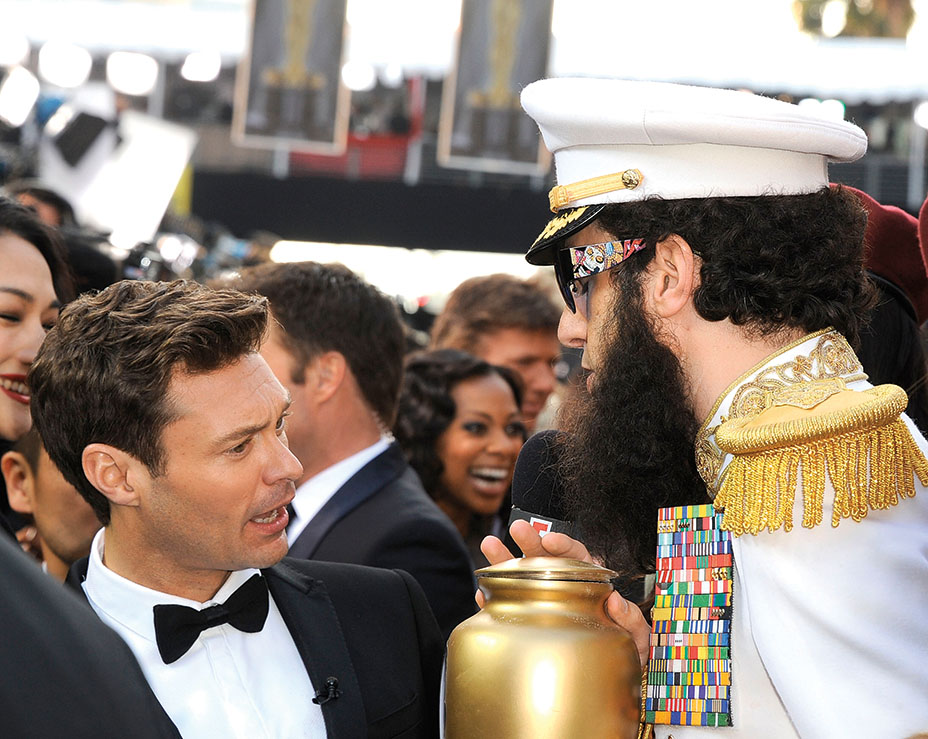 Is there a world in which we ever see the “mani cam” again?

It’s not on my list of priorities. (Laughs.) I don’t mind the glam bit of it, the 360-degree camera we’ve got for fashion, but I don’t think that the mani cam is on the list of things that we’re doing for the carpets.

Did it feel odd this fall not hitting the Idol audition circuit?

It is weird. I think it’ll really hit me when we don’t start in January. But, hopefully, I’ll get a job. (Laughs.)

People are still reading into your signoff.

When I said, “Goodbye for now?” I had to time it so that the last two words came out of my mouth right before the production cards ran and the mic dropped. I told [creator] Simon Fuller ahead of time, and he was like, “Fantastic. Do it.” I just don’t see a world where Idol doesn’t resurface. We look at formats. We try to create shows. It’s hard to believe that franchise doesn’t resurface in some capacity, in some form, soon.

HOW THE KARDASHIANS TOOK OVER THE WORLD

2006: A Seacrest producer shows up at Kris Jenner’s house to film the six kids at a family barbecue. The sizzle reel is pitched at E!, and a cable empire is born.

2009: As the third season of KUWTK wraps and interest swells, E! premieres the first of seven RSP-produced spinoffs: Kourtney and Khloe Take Miami.

2010: Kardashian-mania reaches fever pitch: The fourth season of KUWTK premieres with 4.8 million viewers, a high point for the series.

2011: E! launches yet another spinoff, Khloe & Lamar. There now is enough original Kardashian footage being produced to blanket E!’s airwaves all year long.

2015: Patriarch Bruce Jenner announces that he’s transitioning to a woman — and getting her own Bunim/Murray-produced spinoff in the process. “About Bruce” attracted 2.9 million viewers.

2016: After years of keeping a low profile, brother Rob returns to the fold (with fiancee Blac Chyna in tow) and gets his own spinoff. Rob & Chyna now averages 2.3 million viewers for E!