Last May 11, Sabrina Carpenter spent her 19th birthday in the desert of Albuquerque, New Mexico, filming the final scenes for her latest movie, The Short History of the Long Road. This year, however, the singer-actress — who will be 20 on Saturday — celebrated another turn around the sun a couple weeks early at the Tribeca Film Festival premiere of that very project with which she hopes to make an indelible mark.

The indie pic — written and directed by Ani Simon-Kennedy — centers around Carpenter’s character, Nola, a wise-beyond-her-years teen who grew up as a nomad on the open road with her father, Clint (played by The Walking Dead‘s Steven Ogg), an anchor in her transient lifestyle. But, after her world is shattered by a shocking rupture, Nola is forced to pick up the pieces alone and forge her own path.

During a recent rainy afternoon in New York, Carpenter — the Disney Channel star-turned-pop princess, known for her polished vocals and equally glossy image — opened up to The Hollywood Reporter about the significance of “stripping down” on all fronts for the leading role that she believes has the potential to empower her legions of young female fans.

“It was a refreshing thing for me to be able to put everything down for a second, literally take off my makeup and do something that I normally wouldn’t do, and that people wouldn’t expect from me,” says a pantsuit-clad Carpenter, pulling her cascading blonde waves to the side as she kicks off a pair of nude Louboutin heels. “When Ani first saw me for the role, there was probably a little sense of, ‘Oh, I don’t think she’s physically right for this.'”

But an “utter and complete transformation” is what Carpenter had been craving — a creative vacation as she was in the midst of crafting her shimmery, dance-driven third studio album, Singular: Act I, released last fall. “I was looking forward to stripping down in every aspect. I wanted to dye my hair for a role. I wanted to be able to get into a character in a way where I’d look in the mirror and not even recognize myself. And that’s exactly what I was able do with Nola,” she says. “Ani asked me, “Are you OK with no makeup?’ I was like, ‘Please!’ She asked, ‘Are you OK with not shaving?’ Again, I was like, ‘Please!'”

As Carpenter points out, “This girl, living in a van her whole life with her dad, doesn’t care about her appearance at all. There’s no self-awareness, only an appreciation for what’s going on inside of herself and others. And Nola’s story is one of survival and autonomy, which I think is very empowering for young girls to see.”

Below, the busy entertainer — who wrapped an international concert tour in Mexico on April 24 and released her new single, “Exhale,” just days ago — talks more with THR about The Short History of the Long Road‘s “intense” monthlong shoot, choosing projects with impact in today’s social climate and doing it all in between writing hit songs and performing for packed houses around the globe. 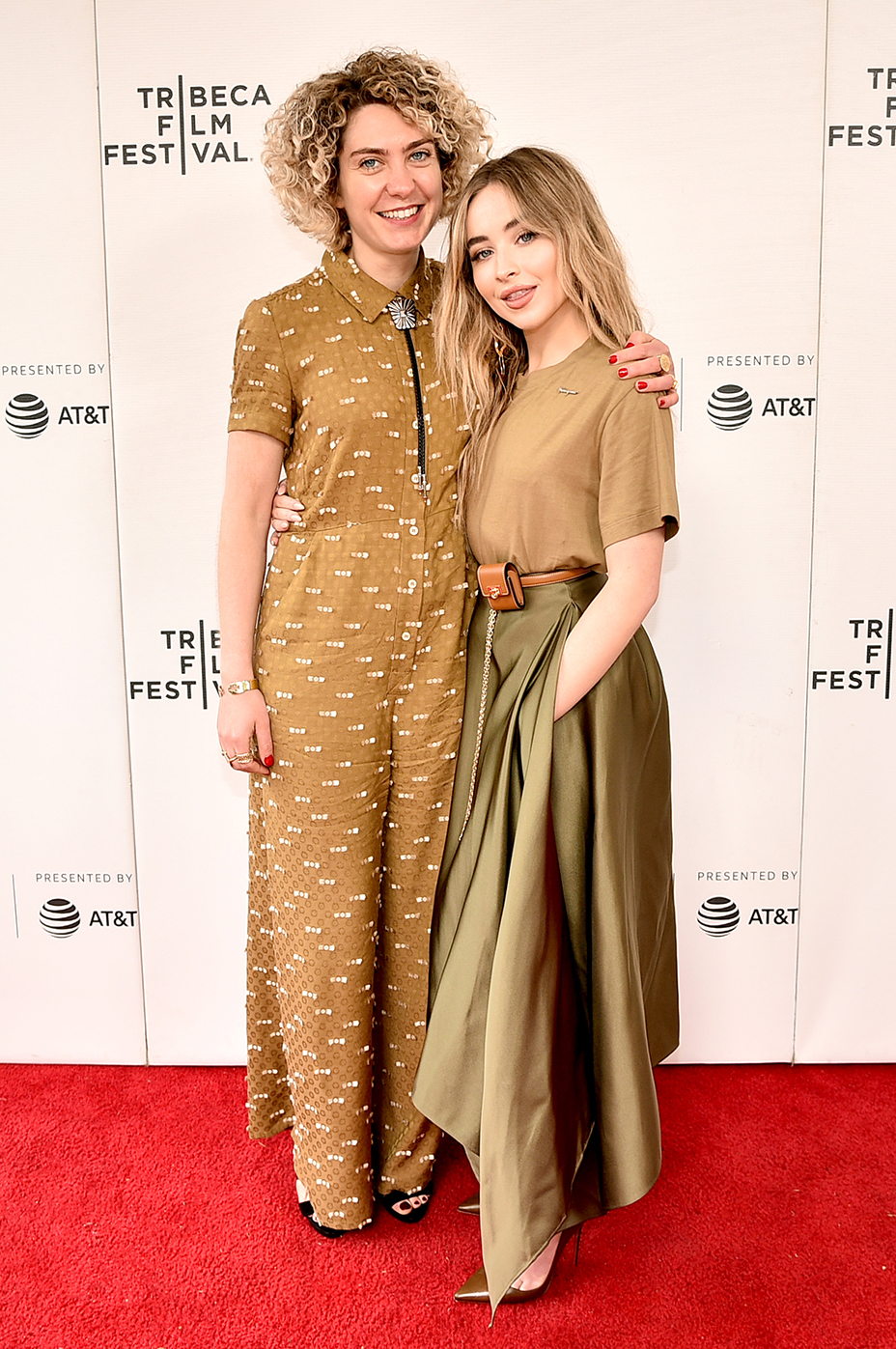 What excited you the most about playing Nola?

The roles, at least when I was getting scripts at the time I was approached about this film, tended to lean very over-sexualized and some were just really, really — I don’t want to say dumb — but some of the roles I came across lacked substance. And I just felt like Nola was very nuanced and there were a lot of layers to her.

The film features a lot of solo screen time. Were you intimidated at all by the fact that the script called for you to carry the majority of this movie on your own?

Yes, it does. I’m sorry about that! [Laughs.] To be honest, I felt comfortable from day one. Ani and I were very much in communication the entire way through. She was very open to me experimenting and improving. We did a lot of improv. There is not much dialogue in the script to begin with. A lot of it is the emotion, the facial expressions. Nola is a girl of few words and that was also interesting for me because I’m not. There wasn’t ever a moment where it was overwhelming, though. It was an intense month of shooting, but also really enjoyable because I was working with a cast and crew that I adored. We took it day by day and scene by scene. For me, it was just important for me to know where Nola was mentally at all times. She’s a girl that lives in the moment because she’s had to do that in order to survive.

Where does your personality overlap the most with Nola’s?

I think our street-smarts. We definitely have a very similar innate ability to think quickly on our feet. Nola has a lot of depth to her, but she doesn’t show it too often. It’s something that she tries to hide and keep under the rug. I’m not like that at all, but I definitely think there are little hints of us in each other here and there. It’s almost like she’s another side of me. Ani told me, “This is the real you. I don’t care what people say. This is who you really are.” That’s what she says, and sometimes I believe it. There’s a part of me now that will always be Nola a little bit.

What parts of Nola do you still carry with you a year later?

Probably just the makeup-free life, as much as I possibly can! [Laughs.] No, I think the biggest part of Nola that I have kept with me to this day is her strength. She is so strong. Playing her was honestly something that I really wanted to do because I think a lot of young girls and young women can learn a lot from her, especially in a world where social media and certain standards of beauty can get in the way of our self-esteem. Nola is a prime example of a strong young woman who is very wise and not superficial in any sense.

Along with director Ani Simon-Kennedy, there was a remarkable number of women who worked behind the camera on The Short History of the Long Road. What was that experience like?

Luckily for me, we had so much of a female crew. It was awesome. Our DP, our director, a lot of the grips and camera operators were women and I think that was really nice. It was a comfy environment for me. This film is one of the first times that I’ve been part of something with a primarily female-driven set. After that, I’ve kind of started a streak of working with female directors on different projects. It’s been very cool.

In today’s social climate — in which young people have become increasingly engaged — do you feel a responsibility to take on projects with more meaning? Your 2018 film, The Hate U Give, offered poignant messages about police brutality and the #BlackLivesMatter movement.

With the past few roles I’ve done, I have definitely been conscious. I have a platform and if I can use it to spread any sort of important message — that I can’t get across through my music and the things that I write myself on social media — I try to get it across in the characters that other people write that I can bring life to. I hope my fans take time and just educate themselves. I don’t want to force things down anyone’s throats. It’s more about opening a conversation and sparking interest. Obviously, we want people to care about these issues. But we really want them to know what they’re talking about and speak to them in a way that inspires them to speak up for themselves when they see injustice. Little by little, if we keep adding these messages into our everyday lives and into these things that kids are seeing in mainstream media, over time we’ll all learn to be a little bit more empathetic to one another, kinder to one another and to know when we see something that isn’t right and how to act on it.

After taking the journey from Disney star to pop star to budding activist and, now, a movie star, what would the younger version of yourself think of all the turns in your career?

To be honest, I always knew that I wanted to do things like this. I knew it would take time. People think of you a certain way when you start out young in this business. But over time, people start to see you grow and start to accept change — but it does take a minute. I don’t think that young Sabrina on Girl Meets World would think that the world would be in a place where we’re not only in need of strong voices but also energized by them and open to change. We are all starting to speak up and it’s being accepted — slowly — but enough to the point where we can talk about things like sexism, discrimination, injustice and so much more on television, in music and through mediums that were previously just used for entertainment purposes. Now, all this art is out there to help us all heal and it’s a big reason of why I enjoy doing it so much.

You’ve spent a large portion of this year focused on your music, touring the world and gearing up for the release of Singular: Act II. But how is acting creatively fulfilling in a way that music isn’t?

Acting has always helped out my singing and my ability to tell stories in a way that I think from my own perspective and from someone else’s perspective. Being an actor, it’s constantly about listening to people and taking in what they’re saying, adapting and then saying what you have to say. Obviously, every story is different. Music is just a shorter story. It’s like a three-minute version of a two-hour film. But when you get to play a character and you get to bring something to life, that can last a long time and that will be something that out-lives me and lives in the world forever. I wouldn’t say that one fulfills me more than the other. They’re symbiotic.

How do you maintain stamina for this career at such a young age?

Caffeine! [Laughs.] No, really, it’s just the love I have for what I do. I get so excited when I get to be performing in another country one day and then coming here the next to promote this film. I literally just got back from performing in Mexico — which was amazing — but I also was genuinely excited to shift my energy to something different. I’ve been talking about the album for the last couple of months and also about the next one coming. I just get excited about things. I’m not jaded yet, so I honestly think that’s what keeps me going.

And if you could emulate any one performer’s career, whose would it be?

It’s such a difficult thing because I look up to so many different actors who have also balanced being musicians. It’s definitely tricky. But I don’t think there’s one person’s career that I want to emulate. Like Nola, I have to carve my own path — whatever that may be.

Sabrina Carpenter to Star in STX Dance Comedy 'Work It'