The prankster Sacha Baron Cohen has himself been pranked, courtesy of a conservative street artist who hijacked a billboard across the street from CBS studios near the corner of Beverly Boulevard and Fairfax Avenue in Los Angeles.

Cohen’s show, Who is America?, debuted Sunday night on Showtime, the cable channel owned by CBS, but the billboard purposely steers potential viewers away from the show by advertising misinformation.

The billboard also promotes Sarah Palin’s theory that Cohen disrespected the U.S. military when he pranked her by posing as a wounded veteran in order to get an interview with the former GOP vice presidential candidate.

The billboard has an image of Cohen in a U.S. Army T-shirt sitting in a wheelchair with a prosthetic leg and a “Make America Great Again” hat. The text reads: “Sacha Baron Cohen Walks Away With a Hit…and a touch of stolen valor. Who Is America? Sat, 9pm. CBS.”

On Monday afternoon, Showtime released a statement that read: “There has been widespread misinformation over the past week about the character of Billy Wayne Ruddick Jr., Ph.D., performed by Sacha Baron Cohen on the Showtime comedy series Who is America? Baron Cohen did not present himself as a disabled veteran, and viewers nationwide who watched the premiere on Sunday can now attest to that.”

The network added: “In Sunday’s episode, during an interview with Senator Bernie Sanders, Baron Cohen in character as Dr. Ruddick was asked by the Senator if he is disabled, and he stated that he is not and uses a mobility scooter to conserve his energy. In addition, Baron Cohen never presented himself as a veteran of the U.S. military to former Alaska Governor Sarah Palin during the booking process or during the filming of her interview, and contrary to her claims he did not appear in a wheelchair. In both the interview with Governor Palin and the interview with Senator Sanders, he did not wear military apparel of any kind.”

Also near CBS studios Monday was a fake ad for the show behind glass at a bus stop. It’s similar to the billboard, though it differs in that it promotes the Wounded Warrior Project, a charitable organization that assists injured veterans.

The billboard, 40 feet across and 15 feet wide, and the smaller bus stop ad are the work of Sabo, a conservative street artist who oftentimes lampoons the Hollywood left.

Sabo hijacked the billboard early Monday morning by using a crew to place a gigantic overlay on top of a legitimate ad for the Young Sheldon show on CBS.

Sabo said he got the idea after Palin said on Facebook on July 10 that she was duped by Cohen.

“My daughter and I were asked to travel across the country where Cohen (I presume) had heavily disguised himself as a disabled U.S. Veteran, fake wheelchair and all,” Palin wrote on Facebook.

“Out of respect for what I was led to believe would be a thoughtful discussion with someone who had served in uniform, I sat through a long ‘interview’ full of Hollywoodism’s disrespect and sarcasm — but finally had enough and literally, physically removed my mic and walked out, much to Cohen’s chagrin,” wrote Palin.

The segment featuring Palin did not air Sunday, nor is it set for the episode that will air next Sunday.

Palin, though, wrote in her Facebook post that “the challenge is to Cohen, CBS and Showtime: donate all proceeds to a charitable group that actually respects and supports American Vets. Mock politicians and innocent public personalities all you want, if that lets you sleep at night, but HOW DARE YOU mock those who have fought and served our country.” 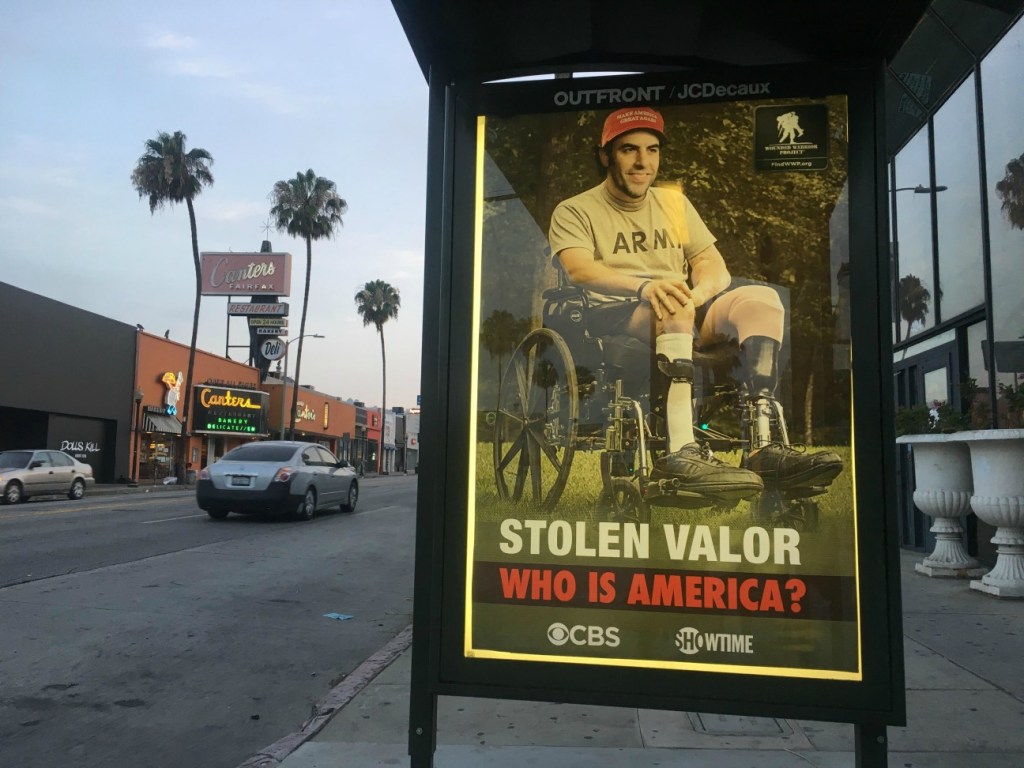