Burn me at the stake for heresy if you must, but I’ll say it. Even when done well, Bernard Shaw’s Saint Joan is a slog. And since Manhattan Theatre Club’s Broadway revival of the 1923 play isn’t done very well, it’s even more of a slog than usual. The production has been anticipated for the starring turn of three-time Tony nominee Condola Rashad in the title role. Unfortunately, this talented actress fails to galvanize the lengthy proceedings, making the play feel longer than it is. And at nearly three talk-filled hours, it’s already very long.

You shouldn’t come away from Saint Joan humming the scenery, but Scott Pask’s set design is the most notable aspect of the production. Consisting of giant golden organ pipes looming over the actors, it’s certainly in keeping with the play’s theme of how the French church conspired to punish The Maid of Orleans for her fanaticism. But while the lavish set makes for an impressive opening image, it then just sits there, becoming numbing in its oppressiveness.

Director Daniel Sullivan has assembled an impressive ensemble for this rendition, and many of the performers do quite well. The standout is British actor Jack Davenport (Pirates of the Caribbean and two of its sequels), here making his Broadway debut as Warwick, the English earl determined that Joan not upset the status quo. The character admittedly has some of the play’s wittiest lines, but Davenport makes the most of them with his sardonic delivery. You can feel the energy rising every time he appears onstage.

Equally excellent is the ever-reliable Patrick Page (Spider-Man: Turn off the Dark), in both the small role of Baudricourt, a nobleman who quickly recognizes Joan’s uniqueness, and the Inquisitor, who sentences her to death. The actor has long been known for his entertaining scenery chewing, but his delivery of the Inquisitor’s monologue is all the more riveting for its restraint; it represents the evening’s highlight. The actor does indulge in a playful moment; when Joan is described as having “intercourse with evil spirits” and a few audience members inevitably twitter, he shushes them with a commanding “Quiet!” 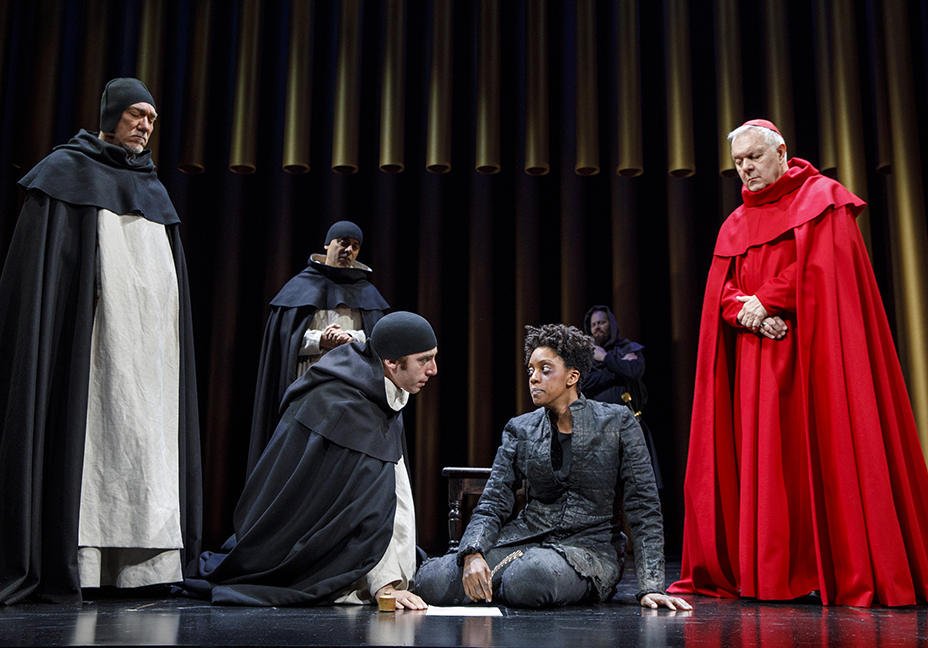 Daniel Sunjata, whose extensive television series credits include Notorious, Graceland and Rescue Me, delivers a relaxed, appealing turn as a soldier sympathetic to Joan. He’s also the rare actor who can rock a full suit of armor. John Glover is enjoyably silky as the Archbishop; Robert Stanton expertly handles several smaller roles; Adam Chanler-Berat induces some much-needed laughs as the Dauphin who becomes King Charles; and Walter Bobbie, taking a break from his successful directing career (Chicago, Bright Star), imbues the Bishop of Beauvais with a sly mixture of menace and smarminess.

But it’s Joan that the evening inevitably revolves around, even if the character is offstage for long stretches of time. Rashad (a regular on Showtime’s Billions) certainly possesses the necessary physical presence, her large eyes blazing with fierceness and intelligence. But she never quite gets a handle on the role, changing her demeanor and attitude from one scene to the next. She also has adopted a strange accent, French crossed with Klingon, and a sing-song delivery that quickly proves wearisome. That is, when you can understand her; despite her extensive stage experience, she barely manages to project her voice. I had an excellent seat eight rows from the stage and still struggled to hear her.

Shaw’s play is more academic than dramatic, largely consisting of indigestibly windy philosophical debates and monologues. You can certainly admire his refraining from melodrama and refusal to make stock villains of those who sent Joan to her death, and his wordplay, naturally, is impressively witty, such as the canny explication of the words “Protestantism” and “nationalism” to describe Joan’s actions. But in this visually monotonous, static production, you come away feeling that the dialogue would be much better read than heard.

The exception, of course, is the epilogue, which seems to be part of a different play entirely. Set 25 years after the main action, it consists of a dream sequence in which Joan, along with several of her tormentors, shows up in Charles’ bedroom one night. The playful scene feels totally incongruous with everything that’s preceded it and is probably unnecessary. But it’s nonetheless a refreshing sorbet after a long and heavy meal.