Could cufflinks be Sam Rockwell’s lucky charm? For the 2018 Oscars, New York-based jeweler David Yurman (co-founded by artists David and Sybil Yurman) made Sam Rockwell a pair of cufflinks engraved with “Leslie” and “Bibb” — after the actress and Rockwell’s longtime partner. Commissioned by Rockwell’s stylist Michael Fisher, the cufflinks were a surprise gift for the actor just before he walked out on the red carpet on the night he ultimately won the best supporting actor award for his role in Three Billboards Outside Ebbing, Missouri.

“They are such an amazing couple, and I think everyone on the carpet was looking forward to seeing them, and they have such good charisma that it was a nice memento that I wanted to make for them,” said Fisher.

Where to Watch the 2023 Oscar Nominees Online

Now, one year later, Rockwell is nominated in the same category for his role in Vice at Sunday’s 91st Academy Awards. So Fisher, who has made it a habit of creating keepsakes for his clients on particularly special days, immediately thought of Rockwell’s dog.

“When David Yurman came back to me and wanted to do another pair of cufflinks for Sam, I thought of his German shepherd, Sadie, who has been with him for a long, long time and is getting older and older,” Fisher told The Hollywood Reporter. “I know how important she is to Sam and Leslie, so I thought of the idea of doing one with line art of Sadie and the other one with her name on it. I sent some sample sketches (based on an image of Sadie that Leslie had posted on Instagram) and they were able to etch it as a black relief.”

He continued: “Sam is filming right now and I’ve gone to seem him to do a couple fittings on location in his trailer and Sadie’s always there. The dog always travels with them, so she’s here for the Oscars.” It remains to be seen whether she will make a red carpet run, and even venture onstage if it’s a win, as Glenn Closes’ dog Pip did at Saturday’s Film Independent Spirit Awards in Santa Monica. Regardless, the customized $325 Streamline cufflinks by David Yurman will let Rockwell carry Sadie on the cuffs of his white shirt at least to complement a timeless black tuxedo.

Fisher has also personalized David Yurman cufflinks for his client Paul Rudd, a presenter at Sunday’s Oscars, but he would not elaborate on the design, saying “it’s personal to Paul so I don’t want to speak about it yet.”

At the SAG Awards last month, Fisher requested that David Yurman custom engrave the same $325 18-karat gold Streamline cufflinks with the initials of Adam Driver’s wife Joanne Tucker as a gift to the BlacKkKlansman best supporting actor nominee. Another thing Fisher likes to do is to create custom cufflinks with the names of clients’ children or, in the case of K.D. Lang, he used her name and that of her breakthrough album Ingenue on collar stays.

For the 2019 SAGs, David Yurman also custom-engraved This Is Us best actor nominee Sterling K. Brown’s initials and an “Om” symbol (which has personal meaning to him, according to a spokesperson for the luxury jewelry company) on a $1,715 black diamond pavé tag pendant. (Brown’s stylist is Naz Meknat.) 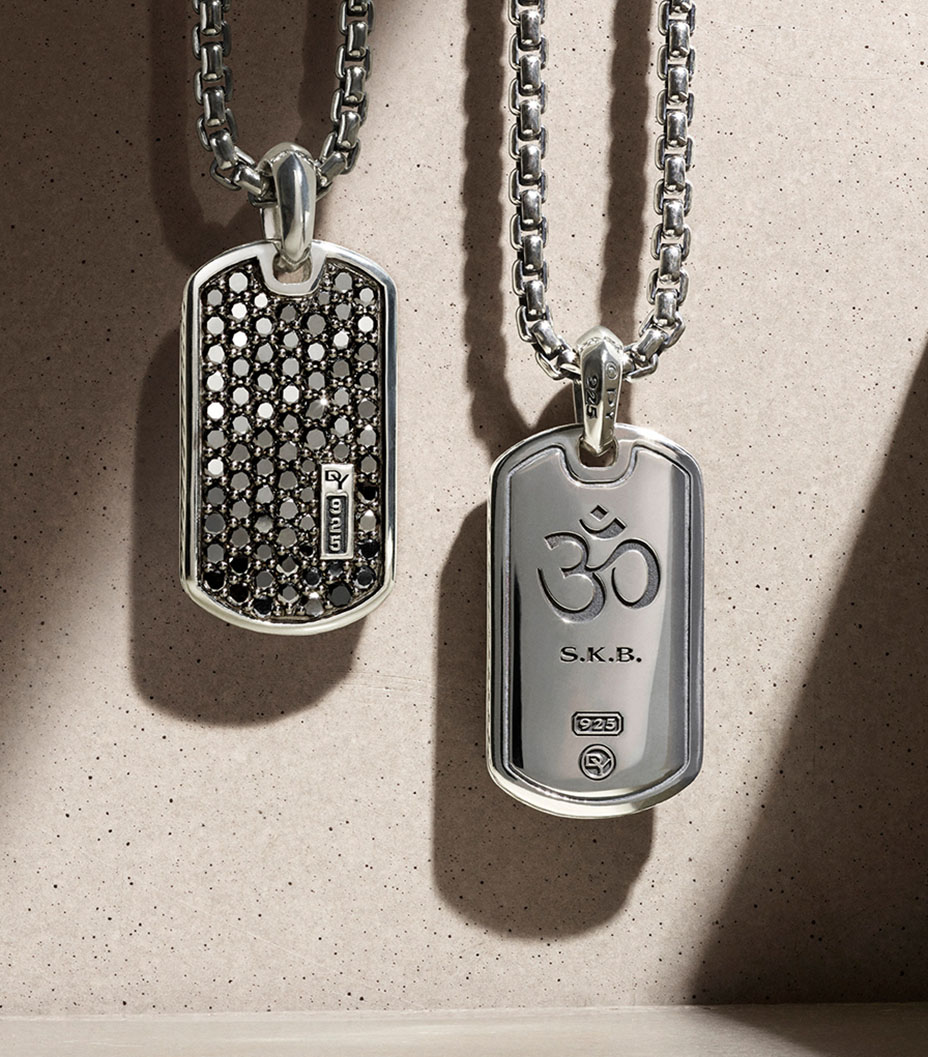 Bradley Cooper’s stylist Ilaria Urbinati has told THR on numerous occasions that he always wears a pair of his late father’s cufflinks — a refreshingly personal gesture, in a world filled with product placement.

“At the end of the day, all of the clothes have to go back — regardless of who won or lost — because so much of what I do is transitory in a sense, with everything on loan,” says Fisher. “So it’s nice for my clients to have something that they can keep to remember the occasion and make it a bit special. Sam will always have these and can wear them forever and ever. I like it when accessories are as personal and meaningful as possible, rather than some amazing watch or accessory that you can only wear for 24 hours.”