Samuel L. Jackson has long said that when he was younger he wanted to be the Black Jacques Cousteau. “That’s [Black] with a Q,” he tells The Hollywood Reporter in a recent phone call. Now he’s paired his passion for ocean discovery with an interest in telling stories about one of the most dreadful chapters in the history of humanity: the centuries-long trans-Atlantic slave trade.

In the new Epix docuseries Enslaved, the actor —  also an executive producer on the show along with his wife LaTanya Richardson Jackson — appears in each of the six episodes, bringing viewers along on a journey that focuses on 400 years of human trafficking through a unique lens of looking at sunken slave ships. The third episode airs on Monday, Sept. 28.

“The director told us that they had identified these ships that had gone down and started telling me where they were and what it meant, that some of them had enslaved people on them,” says Jackson. “And one in Michigan was a liberation ship that was taking people from some point here in the U.S. to Canada. I wanted to be a part of that of course.”

In the series, divers part of the group Diving with a Purpose — an organization that works on “submerged heritage preservation and conservation projects worldwide with a focus on the African Diaspora” — search for and locate six ships that were lost along with their human cargo. The dives are a jumping-off point for stories that explore the business of slavery and the culture of the time. “There’s always a dive that goes with each episode,” says Richardson Jackson, “and each episode takes you to a different exploration of what happened in this particular place and time.”

Adds Jackson, further explaining his interest in the project, “That sounded like something that was totally different from what we know or what we talk about. We are always talking about what happened to the enslaved people once they got here [to the United States] and what that history is. And it turned out to be totally intriguing in terms of them leaving, the business aspect of it, learning new things about how these people were insured and what kind of people were commissioning these ships.”

One of the most compelling moments for the couple was seeing original court cases and insurance claims arising from lost slave ships and reading the cold language that classified human beings as “cargo that was deemed merchandise for use and sale,” says Richardson Jackson.

“The shipwrecks are important because you find out that there were people who commissioned these ships, had insurance against the cargo, and that the human beings were not [classified as] human beings — they were cargo. When they went down, they were able to claim them as that. The horses were valued at more than the humans that were on those ships,” says Jackson. “There are certain ships that were going down that nailed the hatches shut so that there would not be a rebellion as the ship was going down and they abandoned the ships and let the cargo, or the people, on that ship go down.”

Jackson adds that recently his wife was in his office home in Los Angeles and the two were looking at a book “that lists all these ships that left Africa with human cargo” and also “laid out the numbers of people on the ship, when they left and when they made it to where they were going, and how many of the cargo were still alive.” “Usually it was less than a third,” Jackson says. He also notes that the one thing that most fueled the slave trade was “the addiction to sugar.” “People discovered they liked sweet tea in Britain and other countries. The majority of the enslaved people that were taken from the continent didn’t come to America. Much of these people that were transported went to South America and the West Indies. That’s where the sugar plantations were.” 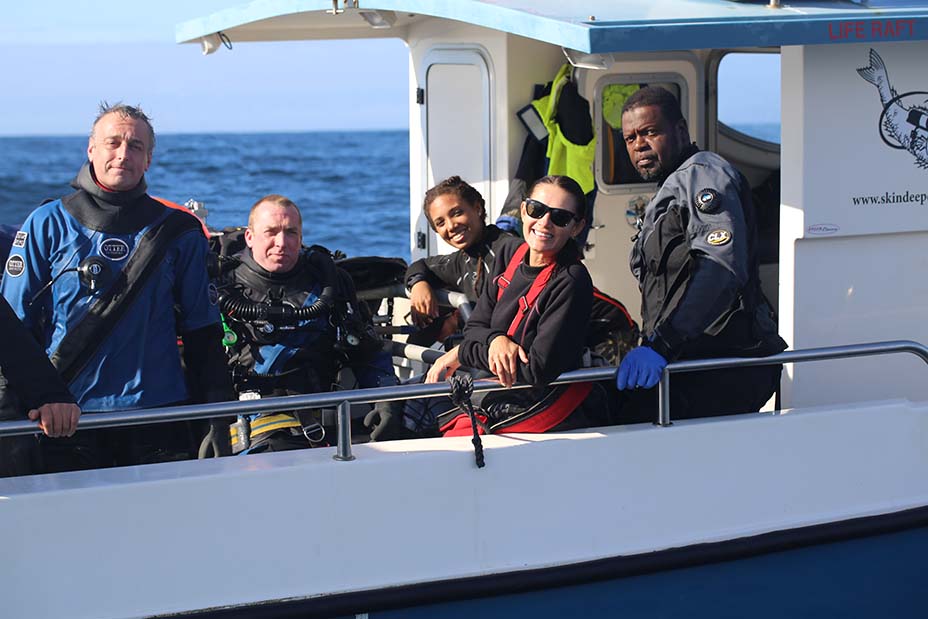 The series also touches on Jackson’s genealogy. He discovered in recent years that his ancestry traces back to the country of Gabon on the African coast, and in Enslaved, he travels to Gabon, meeting people who are part of the Benga tribe, which DNA tests confirmed he is related to. “Gabon was one of the jumping-off points for a lot of different [slave] ships,” says Jackson, adding, “It sort of explains my love of the ocean. They are basically sort of beach people. They live close to the water and they have a very interesting story of their trek from I guess Egypt all the way down to that part of the African coast.” His wife, however, says she has not done similar DNA testing to discover her roots. “I think most African-Americans, most Black people, we all want to know what little town, what culture might be coursing through my veins” but added, “I have to be ready to delve into that.”

In the series Jackson is joined by British journalist Afua Hirsch, author of the book Brit(ish): On Race, Identity and Belonging (“She’s a brilliant writer,” says Jackson) and documentary filmmaker and journalist Simcha Jacobovici. There are also re-enactments of historical incidents. “You come out of that rainforest in Gabon and walk onto the huge beautiful beach and you see these things that are out there that you haven’t seen,” explains Jackson. “Those people have never seen a ship like that before. And all of a sudden you step into that beauty and you step into the wonder of what that is, and all of a sudden you are in hell and there you have it. It’s a contrast.”

The couple also mention that they are owners of two pieces of artwork that look at the history of the slave trade. “We have a piece of art from the artist Radcliffe Bailey who created these different kinds of Black sailing ships crossing the Atlantic. We own one that’s called Corrupt Beauty, that is so beautiful to me every time I look at it but I say I understand why this is Corrupt Beauty. The ship itself is an incredibly beautiful vessel. It’s all black and it’s on these piano keys that are black.” The other artwork is also by Bailey and is titled The Door of No Return. The title, Jackson notes, refers to, “the last door you pass through as you step on to a ship.”

While digging deeper into this history is a painful territory, it hasn’t dislodged the couple’s love of ocean-going vessels. “I regret having to look at the ships that we have drawings of, historically, in libraries and books of how my people were packed like sardines in the hull of a ship to be brought here,” says Richardson Jackson. “[Even so] I still have a great affection for a billowing sail and that Cutty Sark was a beautiful ship.” Being stuck in stay-at-home for the last months has made them appreciate even more the freedom that a ship represents. “We love ships,” says Richardson Jackson. “We are regretting that we are sequestered right now and couldn’t go on a boat this summer. The joy of our life is to be on a boat somewhere.”

And while President Trump has recently launched attacks against the 1619 Project (the New York Times Magazine initiative that seeks to reframe the history of the U.S. by looking at the consequences of slavery), Richardson Jackson tells THR that the project “is so important.” “It brought to life just how many inaccuracies exist in the United States in terms of telling the story of the slave trade.” She adds, “The dominant culture has never really dealt with the psyche of who we are. Which is why we talk about the duality of being a Black person in this country — having to live with what you know and yet [also] with what other people think they know about you which is always different.” 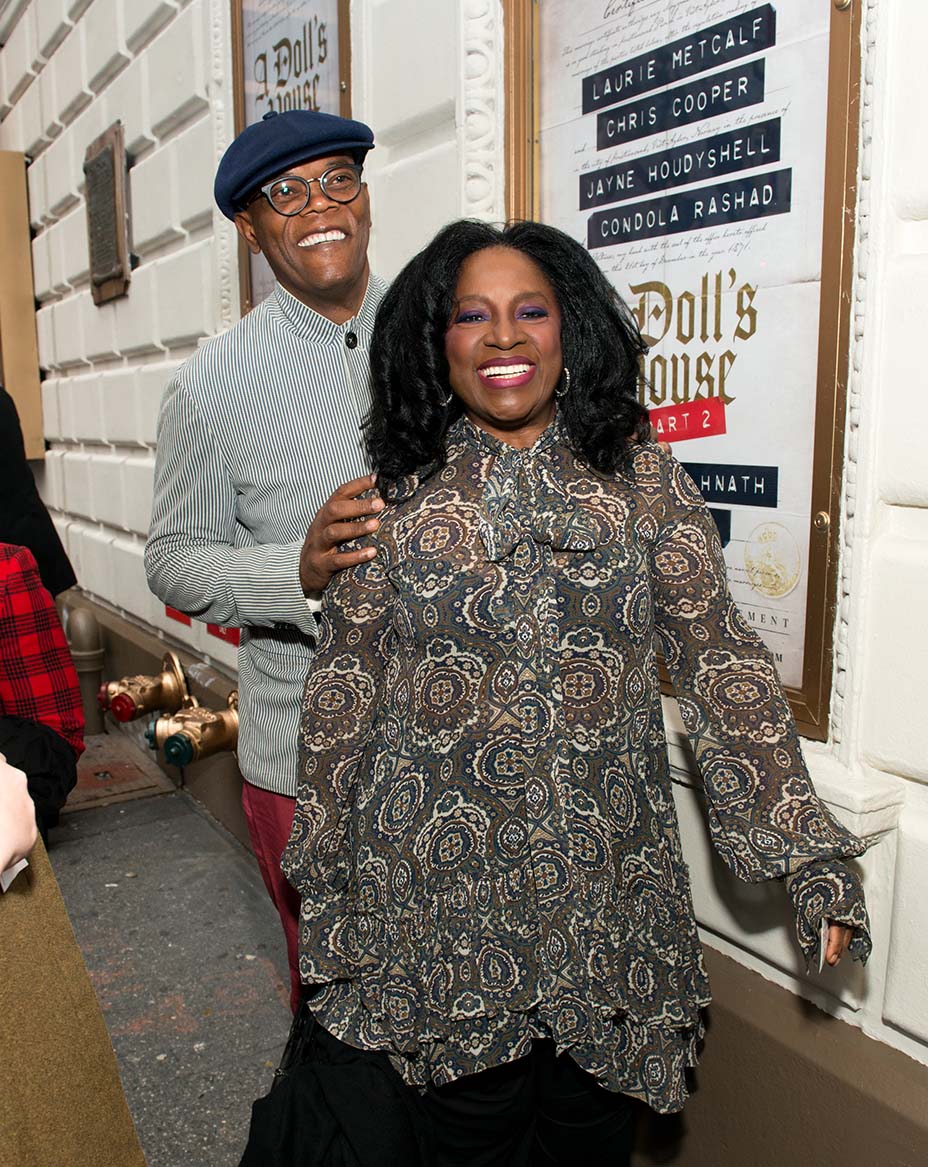