Let it be known: The undead transformation process is quite a messy one.

“I experienced an emotion that I’d never experienced before. I was scream-laughing while I was watching it,” star Skyler Gisondo told The Hollywood Reporter at the series’ premiere. “You have to watch, and you want to watch, but you’re also terrified and also cracking up. It’s kind of thrilling and shocking in that way.” But, he warned, “Don’t be eating dinner. Or maybe you’re into that! Maybe do eat dinner! Whatever floats your boat.”

The comedy hails from Better Off Ted creator Victor Fresco, which means that in between the graphic zombie happenings (you know, the eating of human flesh, which Barrymore told THR was made of everything from cake to dried apples), there’s also a comedy about a long-married couple going through some rough times.

“It’s about a marriage and it’s funny and it’s gritty and it’s got a unique tone,” said Barrymore on the carpet. “I love this show. I’m excited about it. I’m excited to be a part of it.”

Explained Gisondo, “It’s a family comedy mixed with a darker comedy, so there’s kind of these ridiculous aspects where it’s almost horror, but because tonally it is a comedy, I feel like you’re in that world. That’s what’s so unique about this show; that’s what makes it unlike other things I’ve seen.”

Netflix boss Ted Sarandos said that the quality of the scripts drew him to the project — and it’s also what helped land his leading lady. “We’re always looking to do something that isn’t already on television, and horror comedy as a genre is really hard to find, so that’s a huge attraction,” he said.

He added, “It was the quality of the scripts. When we sent them out, our dream was to get a Drew Barrymore type, and we got the Drew Barrymore. She fell in love with the scripts. It’s her first time doing a TV series. I’m an enormous fan, so I was thrilled.” 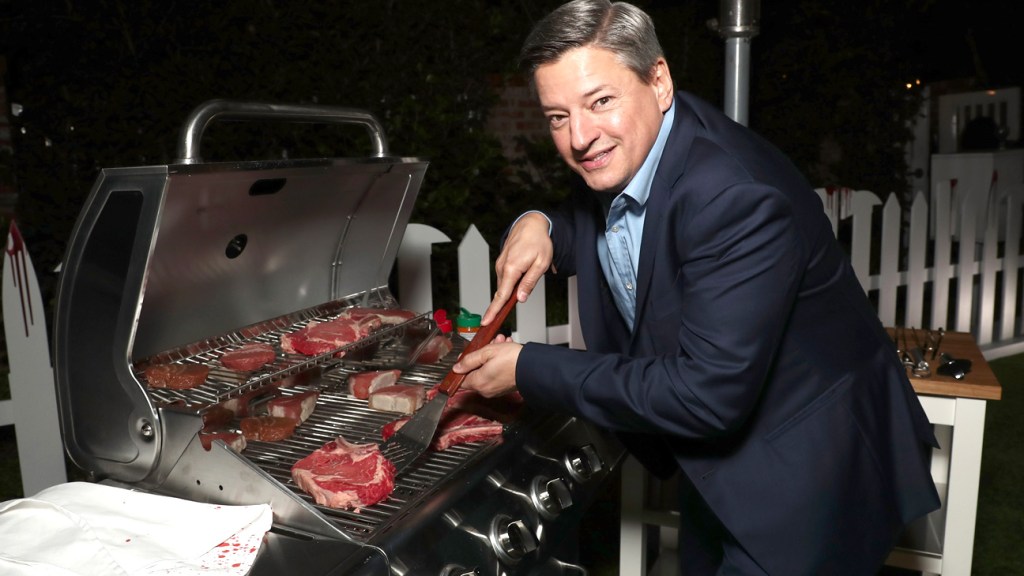 Olyphant is no slouch either. “He has that rare combination of really funny and really good looking,” said Sarandos.

After a screening of the first two episodes, guests bussed a mile north to Franklin Village’s Lombardi House, where the event space was transformed into a faux-open house that truly committed to the zombie theme. A faux-sale sign emblazoned with Barrymore and Olyphant’s characters greeted guests, and the entire grounds were scattered with fake limbs (a corn hole game had human heart-shaped beanbags, the horseshoe game stake was a severed leg) and splattered with fake blood.

The house itself was staged inside with zombie themed-paraphernalia (cookbooks by the “Severed Foot Contessa,” organs alongside the cookie jars, a “brains” scented candle), but guests mingled outside and ate passed, themed hors d’oeuvres (bratwurst sandwiches served off shovels, fried chicken skewers served off trays with severed fingers inside) and sipped on themed cocktails (the “flesh pressed juice” had blackberries, cherry syrup and vodka and was served inside a faux-Blueprint juice bottle labeled “blood, brains, tissue, guts, plasma”). Talk about a killer premiere.