Thirty-six women who worked with Al Franken on NBC’s Saturday Night Live have signed a statement of support for the Minnesota senator in wake of sexual harassment allegations.

“We feel compelled to stand up for Al Franken, whom we have all had the pleasure of working with over the years on Saturday Night Live,” began the statement, obtained by The Hollywood Reporter. “What Al did was stupid and foolish, and we think it was appropriate for him to apologize to Ms. Tweeden, and to the public. In our experience, we know Al as a devoted and dedicated family man, a wonderful comedic performer, and an honorable public servant. That is why we are moved to quickly and directly affirm that after years of working with him, we would like to acknowledge that not one of us ever experienced any inappropriate behavior; and mention our sincere appreciation that he treated each of us with the utmost respect and regard.”

The statement concluded, “We send our support and gratitude to Al and his family this Thanksgiving and holiday season.”

SNL was not involved with or aware of the statement, a source tells THR. The list, made up primarily of past stars and staff, was created by one of the women who worked with Franken 30 years ago.

The women who signed the statement include original female castmembers Jane Curtin and Laraine Newman, along with veteran show producer Marci Klein, and many SNL staff.

Two women have come forward to allege the former SNL star and comedian touched them inappropriately. Last week, ABC broadcaster Leeann Tweeden accused the Democrat of kissing and groping her without her consent during a 2006 USO tour, providing photo evidence of the latter. A second woman, Lindsay Menz, later claimed that Franken placed his hand on her behind while posing for a photo at the Minnesota State Fair in 2010, when Franken was an elected official.

Franken offered three apologies to Tweeden for his behavior, two public and one private that the journalist read aloud on The View. In response to Menz, Franken said he didn’t remember taking the photo but that he felt “badly” that Menz felt disrespected.

Resurfaced photos of Franken with Arianna Huffington also purported to show the comedian “groping” The Huffington Post founder. Huffington, however, defended Franken and said the photos were based on a bit she did with Franken for Bill Maher’s one-time show Politically Incorrect.

After Tweeden went public, Franken also said he would cooperate with an ethics investigation. As a result, the senator has seen bipartisan calls for an ethics inquiry, with some advocating for his resignation.

Tuesday’s statement comes after eight of his former female staffers also penned a letter of support for the senator. “Many of us spent years working for Senator Franken in Minnesota and Washington,” read the statement, released on Friday. “In our time working for the Senator, he treated us with the utmost respect. He valued our work and our opinions and was a champion for women both in the legislation he supported and in promoting women to leadership roles in our offices.”

See the statement below. 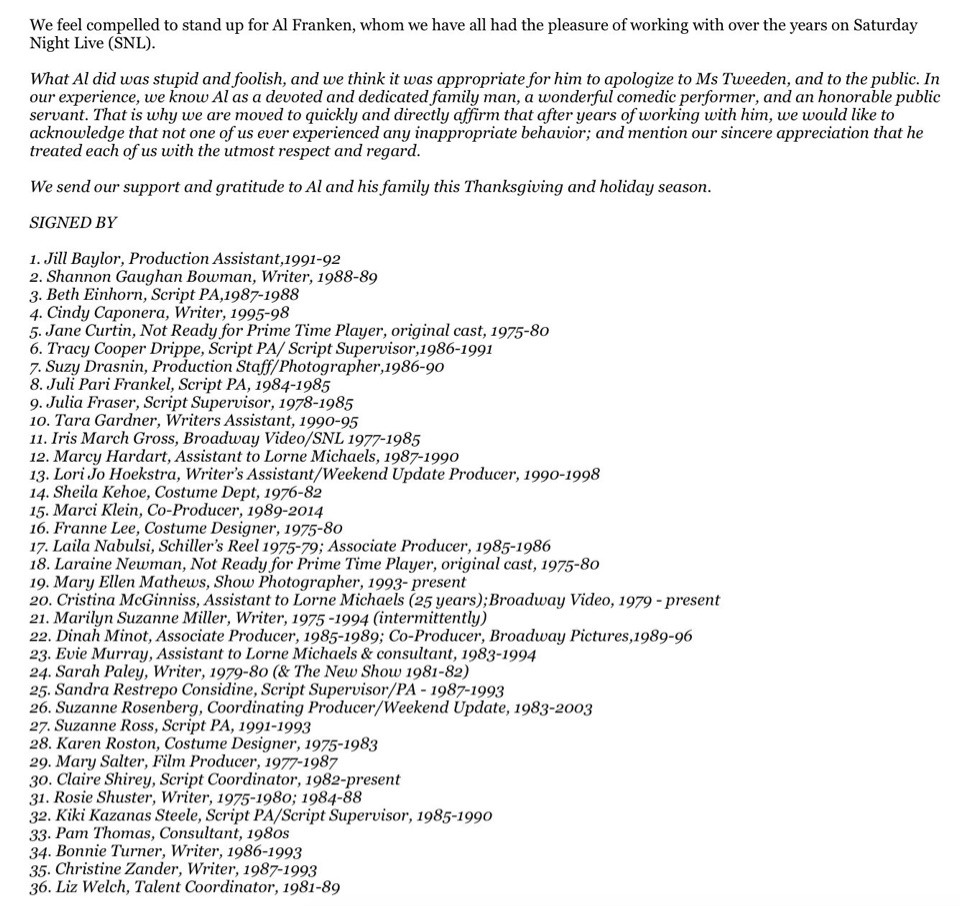