“No one prepares you for success,” explained Cuba Gooding Jr. to a crowd in the King Abdulaziz Center for World Culture on March 24. Taking part in a lengthy Q&A, the Oscar winner was the star attraction at the Saudi Film Festival, posing for selfies on the red carpet outside the striking 85,000-square-foot structure, known locally simply as Ithra and built to resemble a small group of rocks jutting spectacularly (and, some have commented, phallically) out of the sand near the country’s Eastern oil hub of Dhahran.

The Hollywood Reporter was the only Western media in attendance at the fest’s 2019 edition, which had a distinct air of optimism among the guests and closed the following night with a busy awards ceremony doling out prizes to emerging and mostly student Saudi filmmakers. For many in attendance, the event perfectly symbolized just how far the country’s embryonic entertainment industry had come.

Launched almost in secret in 2008 when cinemas and public gatherings were still considered “haram” (forbidden) by the Mutaween, the country’s powerful religious police force, the festival lasted only a year before pressure forced organizers to pull the plug (“They just weren’t sure if what they were doing was illegal or not,” says one Saudi producer). It re-emerged without fanfare in 2015 as the kingdom was tentatively pushing back against opposition to entertainment and names such as Haifaa Al-Mansour — the groundbreaking director of Wadjda, which became Saudi’s first entry in the Oscars’ best foreign-language film race — were making waves overseas.

But it was 2019’s fifth edition that, as one guest put it, was the first to feel “truly mainstream” — the first to be housed inside this multimillion-dollar permanent venue and the first held since a 35-year cinema ban lifted in December 2017, part of a number of reforms ushered in by Crown Prince Mohammed bin Salman (MBS).

The royal, now 33, was cultivating a progressive image at the time, bolstered by a whirlwind trip to the U.S. in early 2018, where he met everyone from Bob Iger to Jeff Bezos. News of Saudi-Hollywood deals came fast and furious: AMC, Vue and iPic were to open cinemas in the kingdom, and the Saudi sovereign wealth fund was investing $400 million in Endeavor. A month later, a Saudi delegation landed in Cannes riding a wave of goodwill and optimism. The global film industry was eager to stake an early claim in a land of more than 32 million (70 percent younger than 30) with a box office that analysts predict could hit $1 billion.

Despite impressive bottom-line opportunities, this master plan to launch a film industry hasn’t had the same upward trajectory since.

In October 2018, outrage over the murder of Washington Post columnist Jamal Khashoggi — reportedly ordered by the Crown Prince — appeared to spark a slowdown, with questions raised about the MBS’ rule. The news compounded growing doubts over the transparency of Saudi business dealings, but also brought Hollywood’s relationship into the spotlight. Endeavor said it would give back the $400 million; would there now be a moral duty for the industry to reconsider doing business with the kingdom?

Gossip on the ground at the Saudi Film Festival suggested there was still some way to go.

Gooding, sources claim, wasn’t the only star originally scheduled to attend. Other A-listers reportedly canceled visits just weeks earlier, around the same time that Endeavor made good on its promise. One of these was said to be Michael B. Jordan (although reps have disputed this, saying that he was invited but never confirmed). “I think they canceled because of Endeavor,” says a Saudi filmmaker.

But with the headlines having gradually shifted away from the events surrounding Khashoggi’s death, the wheels of commerce appear to be rolling again.

“Wall Street — and Hollywood — is quietly getting back to business,” notes Karen Attiah, Khashoggi’s editor at The Washington Post and an outspoken critic of the Saudi regime. AMC, which opened the first Saudi cinema after the ban lifted and remains the only non-Middle Eastern chain in operation there, announced at CinemaCon that it was plotting 40 to 50 sites in the next five years, and up to 10 by the end of the 2019 (CEO Adam Aron said the decision was made “after a lot of reflection.”) AMC was also among the main sponsors of April’s Cinema Build KSA trade conference in Riyadh, together with Mexican giant Cinepolis, which announced in early 2018 it was hoping to crack the Saudi market. Luxury chain iPic is continuing with its expansion plans, eyeing “25 to 30 locations,” according to a spokesperson.

However, Khashoggi is just one of the morality tests facing international investors. Amid the devastating, ongoing Saudi-led war in Yemen — and accusations that the regime tortured imprisoned female activists — as recently as April it beheaded 37 men accused of terrorism-related crimes. One of those executed was just 17 when he was arrested (and on his way to a university in the U.S.), while another had his dismembered body put on public display as a deterrent. Such actions sparked immediate condemnation, including from the UN’s human rights chief, and again called into question the entertainment industry’s planned investments.

“Anybody looking to do business right now with Saudi Arabia — anyone from Hollywood, such as AMC — should be shamed,” says Ariel Gold of the women-initiated peace group Codepink, which protested MBS’ 2018 L.A. visit.

Hollywood’s reaction to the latest news has been muted. AMC refused to comment on whether it had reevaluated its plans, instead pointing to Aron’s CinemaCon quotes (suggesting nothing has changed). The National Association of Theatre Owners — whose chief, John Fithian, said in Las Vegas that he backed investment in Saudi Arabia — didn’t respond to several THR email requests for comment.

“It just seems like Hollywood is putting profits over everything,” says Attiah.

However, what profits are to be made in Saudi Arabia are yet to be truly understood.

As it currently stands, there are still less than 50 screens across the whole of the kingdom. AMC has a solitary one (which one Saudi producer laments “hasn’t even been fitted with proper cinema seats” a year after opening), the rest coming from regional chain Vox, which has theaters in Riyadh and the coastal city of Jeddah, including two Imax screens.

Aside from the moral questions of doing business with Saudi Arabia, investors have also been wrestling with more practical concerns: Insiders say a raft of systemic problems stands in the way of progress, including a distinct lack of transparency over laws, licensing, regulation and distribution. THR knows of at least one cinema chain that halted its plans for exactly this reason.

There were already signs of such doubt before the country’s coming-out party at 2018’s Cannes. The Saudi pavilion in the International Village was a source of daily activity (and fragrant Arabian coffee), and at a bustling press conference in the Carlton, the Saudi Film Council — only weeks old — announced an incentives package to lure Hollywood productions and a film fund for local ones.

All looked hugely promising — and the industry seemingly welcomed its newest, not to mention wealthy, member with open arms. But it wasn’t long before the “pause” button on every new initiative was effectively hit, with many saying Cannes had been a flashy but false start for a country whose first cinema in more than three decades had opened less than a month earlier. “It was simply too much too soon,” says a Middle East-based filmmaker.

Many issues stem from the multitude of government bodies involved, with older organizations such as the General Commission of Audiovisual Media jostling with newer entities like the General Authority for Culture and the Film Council. To reorganize matters, the day after the Saudi Film Festival closed in March, Saudi’s first-ever Ministry of Culture officially launched at a major event in Riyadh. The ministry’s formation was, THR has learned, the reason for much of the inactivity, with the council recalibrating itself beneath it.

“Saudi Arabia is basically functioning like a startup at the moment,” notes a local producer.

Due to the various upheavals and changes, insiders tell THR that Saudi’s Cannes presence at this year’s festival is going to be considerably quieter (“What are they going to do, announce the same things again?” says one).

It’s clear that building a film industry on fallow ground is no easy feat. It’s also important to note that it’s not simply entertainment being developed in the country, which is awash in billion-dollar building sites as it looks to become a regional hospitality and retail powerhouse. One Saudi claims that the lack of cinemas so far is simply a logistical issue: “We just can’t feasibly build everything at once.”

It’s also clear that Hollywood’s willingness to do business with an openly authoritarian regime — especially when all decision-making in the kingdom is done from the top down — will provoke condemnation, especially with Donald Trump having effectively given the country his unequivocal support.

“Culture is one of our biggest exports and one of the biggest tools MBS is using to show the world, ‘Hey, he’s OK,’ ” says Attiah. “The Trump administration has pretty much sided with him, so I think that’s why there’s a hope that other nodes of American power — including Hollywood — could assert a bit more and use their leverage. But they’re in the business of making money.” 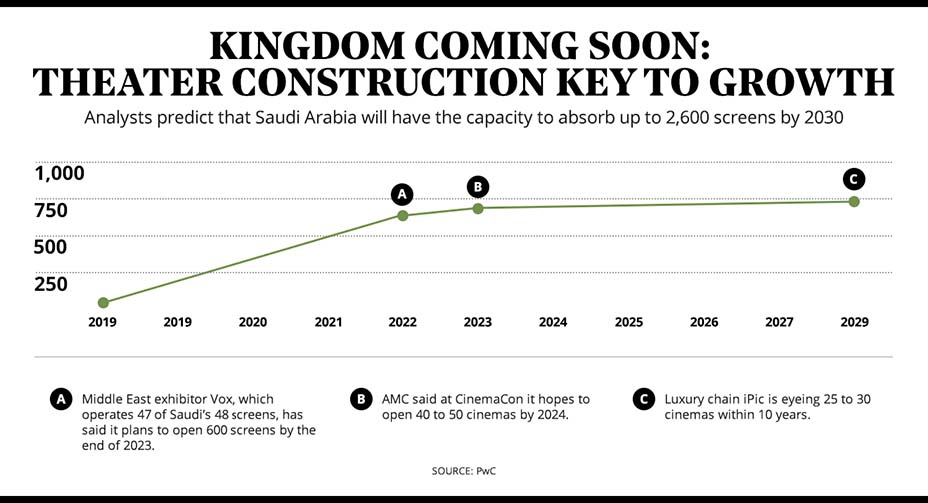