Who knew Thanos could be a style inspiration?

The Marvel Universe villain played by Josh Brolin figures prominently in Anthony and Joe Russo’s Avengers: Endgame, and one of the character’s key plot points — his quest to gather the six Infinity Stones, which together bestow unlimited power — also influenced two looks seen on the red carpet at the film’s high-wattage premiere on Monday night in Los Angeles.

“He explained that he had this crazy idea and asked, ‘Can you do the glove of Thanos?’” Boyajian remembers, referring to the “Infinity Gauntlet” worn by Thanos, created to house the stones, which made its debut in a 1991 Marvel comic. “That’s very much his sense of humor; he is maybe the funniest person I’ve ever met. So I told him, ‘Sure, I’ll give it a try.’ I did some sketches, and he was completely involved in the process.” 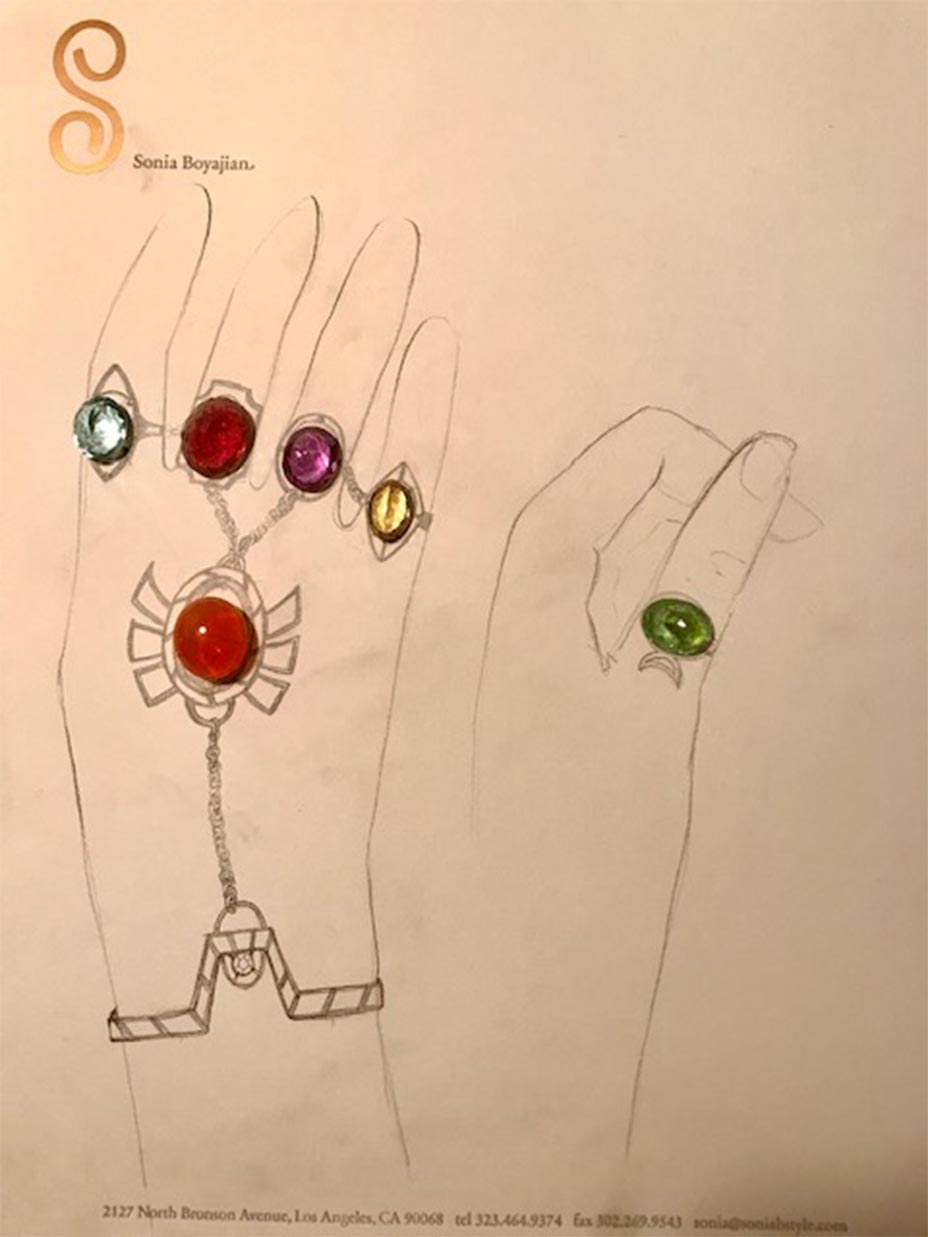 Boyajian crafted a unique piece of hand jewelry that directly takes its cues from the look of the gauntlet. Johansson paired the piece with a custom strapless chainmail dress by Atelier Versace.

“I’ve been calling it the glove of Thanos, because I based the lines on the piece he wears,” Boyajian tells THR of the design, rendered in 18-karat gold and featuring tourmaline, aquamarine, amethyst and Mexican fire opal. With its setting, the latter stone also can be detached and worn on its own as a pendant. “I didn’t want it to be one big piece that she wears just the one time,” Boyajian notes of the convertible design. 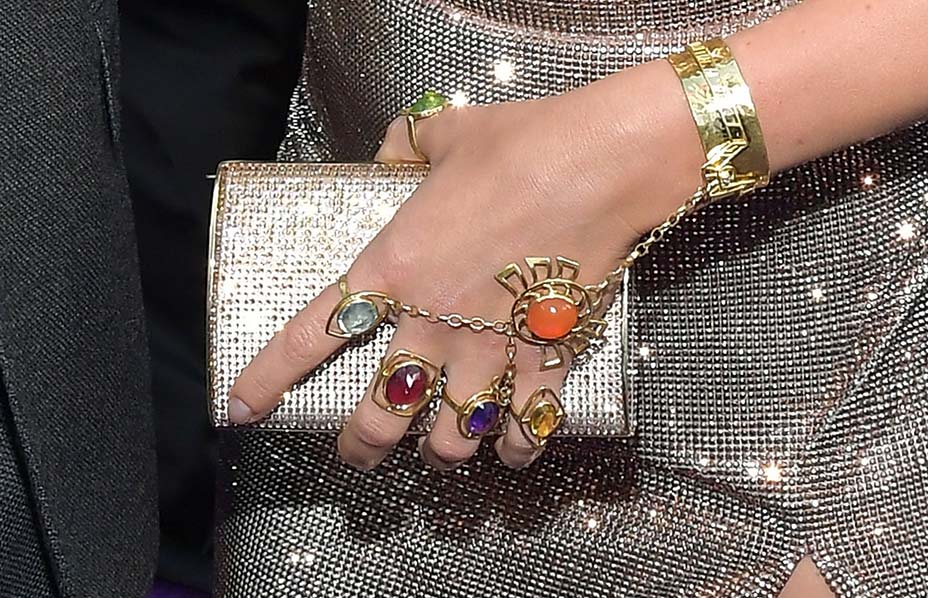 Boyajian already had a good sense of Johansson’s style; the pair have been friends for more than 15 years, she says. Ultimately, the designer knew the actress, who has played Natasha Romanoff (aka “Black Widow”) since 2010’s Iron Man 2, could carry off the bold design.

“Scarlett doesn’t wear anything she doesn’t feel confident in,” Boyajian says. “But that strong sense of self and that confidence are among the reasons she shines on the red carpet.” 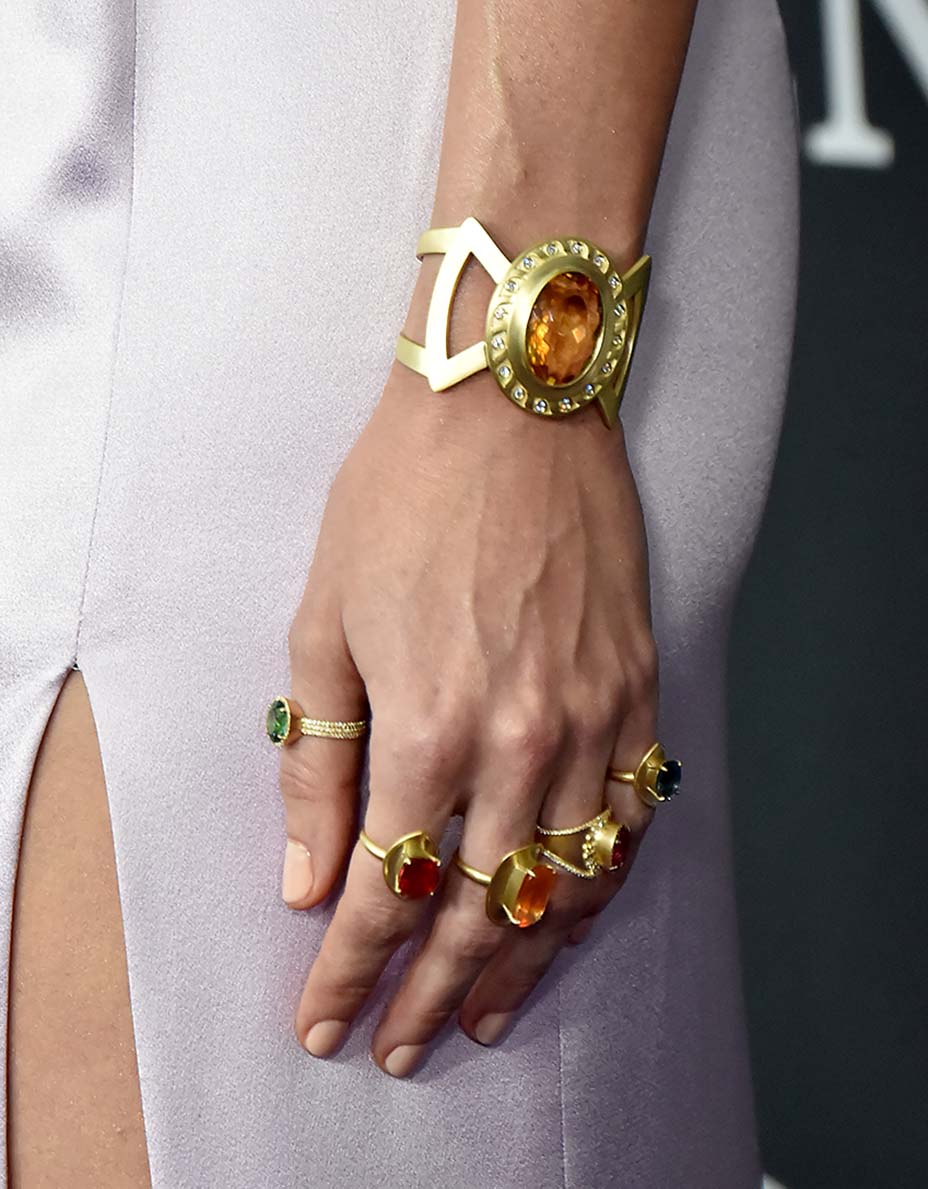 Co-star Brie Larson paired her custom lavender Celine gown with gauntlet-inspired jewelry by another L.A.-based designer, Irene Neuwirth. The grouping included one-of-a-kind rings featuring green or pink tourmaline, aquamarine and fire opal, as well as a one-of-a-kind cuff bracelet highlighting a citrine and accented with full-cut diamonds. The collection of multiple rings and the cuff, especially with its oversized yellow gemstone, on Larson’s left hand and arm indeed evokes thoughts of the “infinity gauntlet.”