The gift of fitness has been one of the best parts about working for Marvel,” says Scarlett Johansson. Before playing Black Widow in the Avengers franchise, the 34-year-old actress (and now mother of a young daughter) admits she’d never stepped foot in a gym: “I am stronger and more capable now than I was 10 years ago, which is so awesome to be able to say.”

Trainer Eric Johnson, who has been working with Johansson since 2009, when they prepped for her Marvel Cinematic Universe debut in Iron Man 2, recalls her first rope climb. “On the way up, she kneed me in the face and gave me a nice bloody nose — she was celebrating and I’m fighting back tears, gushing blood,” he says, joking, “she’s dangerous even when she’s not in the Black Widow costume!”

Johnson is the co-founder of Homage, a New York-based fitness company he owns with brother Ryan Johnson; the trainers, who also work with Ryan Gosling and Sebastian Stan, debut their bespoke duplex gym in a residential Upper East Side building in May.

“What is the Black Widow able to do? Lift 500 pounds,” says Johnson, who strategizes how to get Johansson as close as possible to these fantasy stats, including on Avengers: Endgame, opening April 26. Training — mostly at Urban Body Fitness in Atlanta, where much of the Marvel filming takes place — includes specific milestones every 12 weeks, such as a 245-pound deadlift, pull-up series, single-leg pistol squats and push-up reps with a 45-pound plate on Johansson’s back. The fact that Avengers: Infinity War and Endgame were shot back to back allowed the pair time to achieve these breakthroughs. “We’re trying to create this crazy comic book hero in real life with somebody who’s normal,” he says. 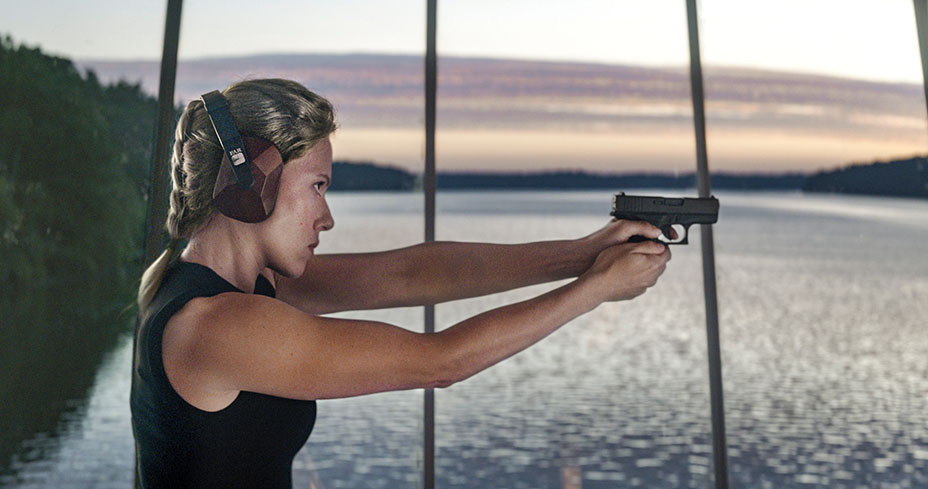 Neither weight loss nor body fat percentage was of interest to the star — performance and the fit of her costume were the main concerns. “Scarlett always wants to be within three weeks out of her peak condition,” says Johnson. Johansson admits that endurance is her biggest struggle, as is time. “It’s hard to fit everything in when you try to balance motherhood, training and work,” she says, “That balance is a myth!” She does 45-minute to hourlong sessions, four to five days a week starting at 6 a.m., before daughter Rose is awake, “clearing me so that after work, I can make dinner and do bath and nighttime with her before preparing my lines for the next day.” Sessions are fun but hyper-focused, involving significant reactive plyometric work — i.e., multidirectional jumps sometimes using boxes and hurdles to keep her explosive and resilient. “If you’re doing a running scene, you want to be as fresh and powerful in the first take as you are in the 20th,” says Johnson.

The trainer also incorporates Olympic weightlifting and gymnastics work and has Johansson drop in on classes — hot yoga, fight training or SLT Pilates (that last one was tough on Johansson, he admits) — to alert him to weaknesses. The duo work in three-to-six-week phases, the first utilizing swinging from sets and various holds to promote rapid brain-to-muscle connection. Phase two centers on strength, and the third leans Johansson out before shooting. “Scarlett hates traditional cardio,” says Johnson. Instead, they do sprint work, battle ropes and kettlebells, a favorite tool because “it teaches her to be powerful and strong while making [the exercise] look elegant and pretty.” After all, it’s not enough for Johansson to simply get through each move; she must “do it with ease and fluidity, be able to own it.”

As a result, Johansson has learned to look cool and composed, no matter the effort or discomfort. “Many people make an ugly face when they train,” says Johnson, but “Scarlett doesn’t really have a pain face” unless she’s trying something new and difficult. He adds, “We’re always pushing her ceiling so anything below that is attainable and easier,” such as learning stunt choreography on the fly.

Diet, of course, is a large piece of the puzzle. For Endgame, Johansson found success with time-restricted eating to stabilize her energy: If her last meal of the day took place at 9 p.m., she wouldn’t eat until at least 9 the next morning. In the days before filming, the star drops carbs to enhance her cuts, “a bit of Hollywood magic,” says Johnson. Core is a constant focus for Johansson since she had her baby, with her goal one day to achieve the formidable Rocky move known as dragonfly. The trainer adds that Johansson’s competitive spirit has proved to be powerful motivation. “If I show her something I can do easily, she wants to do it,” says Johnson, laughing. “We finish a lot of sessions with sprints, me versus her, and if I offer a 5-yard head start, she gets pissed off that I would even dare.”

THE MARVEL FOOD PLAN
Eat in a low/low/high-carb cycle with 12-hour minimum fasting between the day’s last meal and next day’s first.

Snack (20-40 minutes after workout): Same as a low-carb smoothie