With Schitt’s Creek having just wrapped filming of its final season, items from the much-coveted Rose family wardrobe need to find a new home. In a special online event, clothing worn by the fashion-forward clan — Johnny (Eugene Levy), Moira (Catherine O’Hara), David (Dan Levy) and Alexis (Annie Murphy) — will go on sale Thursday on Toronto-based store VSP Consignment’s website. Fans will have the chance to get their own piece of memorabilia from the show, as well as pieces that never made it to air. (The site is currently down, in preparation for the big sale, and will open to the public at 12 p.m. ET.)

“It’s a really significant collaboration,” VSP Consignment’s content and collaboration manager Marlowe Granados told The Hollywood Reporter. “We have all six seasons of wardrobe from Schitt’s Creek! The show did such a stunning job using fashion as a narrative device, and we are so happy to be able to showcase the pieces that were so pivotal to the storyline. Putting the pieces online, and making the pieces accessible to the show’s international fan base is a real rarity.”

Situated in the Dundas West neighborhood of Toronto, VSP Consignment has developed a name as the go-to shop for curated designer pieces, from contemporary must-haves to hard-to-find classics, since opening in 2013. The proudly Canadian show with global appeal, created by father-son duo Eugene and Dan Levy, makes the partnership between Schitt’s Creek and VSP Consignment a fitting one. The collaboration came about organically, through mutual friends of store owner Britt Rawlinson and Dan Levy, the series’ co-creator.

“We’ve been able to take the traditional idea of a wardrobe sale and come up with something that is available to the show’s international audience, from collectable memorabilia to these key designer pieces,” says Rawlinson. 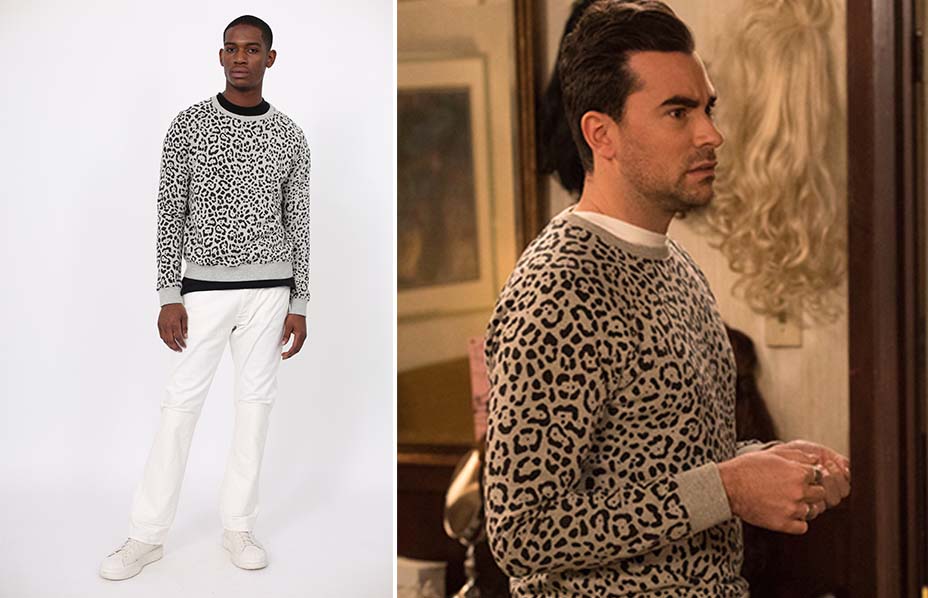 Earlier this year, the sitcom, centered on a once-rich family whose lavish outfits are among the last vestiges of their previously privileged life, earned its first batch of Emmy nominations, including for outstanding contemporary costumes. Debra Hanson was nominated as costume designer for the episode titled “The Dress,” with Darci Cheyne Darcy as assistant costume designer (Russian Doll won the category). The gown at the center of the episode, the gold-feathered and sequined Pamella Roland dress, priced at around $5,200, will be the most expensive item on sale.

The collection includes the likes of show-favorites Dries Van Nouten, Isabel Marant and Alexander Wang, with eyewear, dresses, men’s suits, footwear and handbags, each displaying the aspirational aesthetic of the core characters — from the flowy boho dresses worn by Murphy as the flighty Alexis, to the structural, black-and-white dramatic pieces favored by O’Hara’s matriarch character and the leather sweaters and androgynous skirt-trousers David lives in. Granados says the huge selection of David’s oversized sweatshirts is one of the highlights of the collection. “I think those will definitely be a hot commodity,” she says. “They range from just under $100 to $400.” In fitting with the younger Levy’s character’s style, pieces from labels Rick Owens, Givenchy and Neil Barrett will be available. 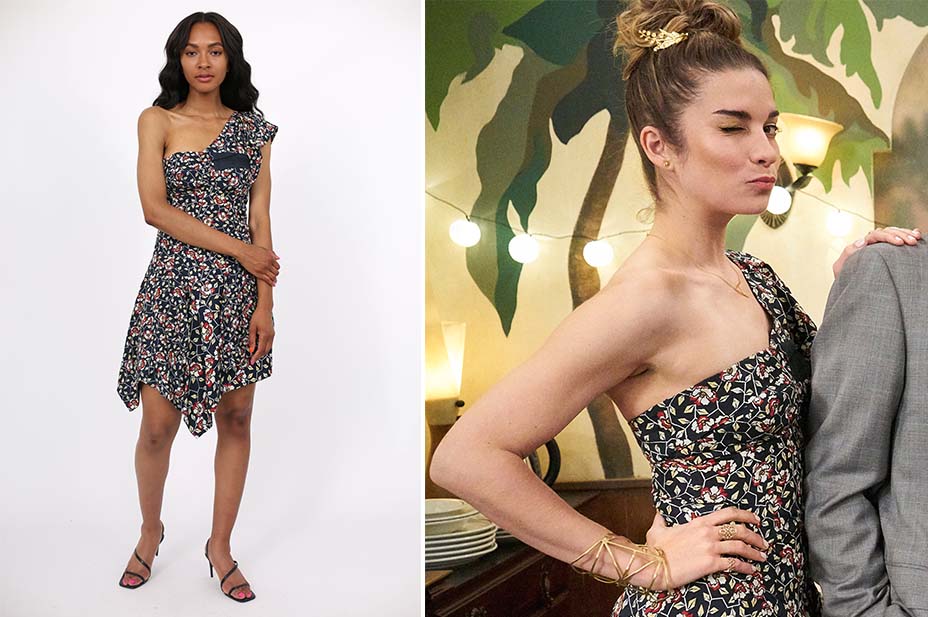 “Moira’s outfits are wonderfully avant-garde and have a bit of a wider range with regards to price point,” says Granados. Fans can expect to virtually raid her closet, which features Proenza Schouler, MSGM, Balenciaga and Alexander McQueen. Unfortunately, Moira’s fabulous wigs won’t be part of the sale, but many of her headpieces and necklaces will be.

In the run-up to the online sale, VSP Consignment has been featuring a number of the items that will be on sale on its social media, modeled by drag artist Miss Moco, who has been channeling Moira’s impeccable style in looks ranging from a black-and-white Pucci dress to a black CDG top with checkered Altuzarra trousers and a Proenza Schouler coat. Moira’s crow costume, a favorite among cosplayers, will also be available. 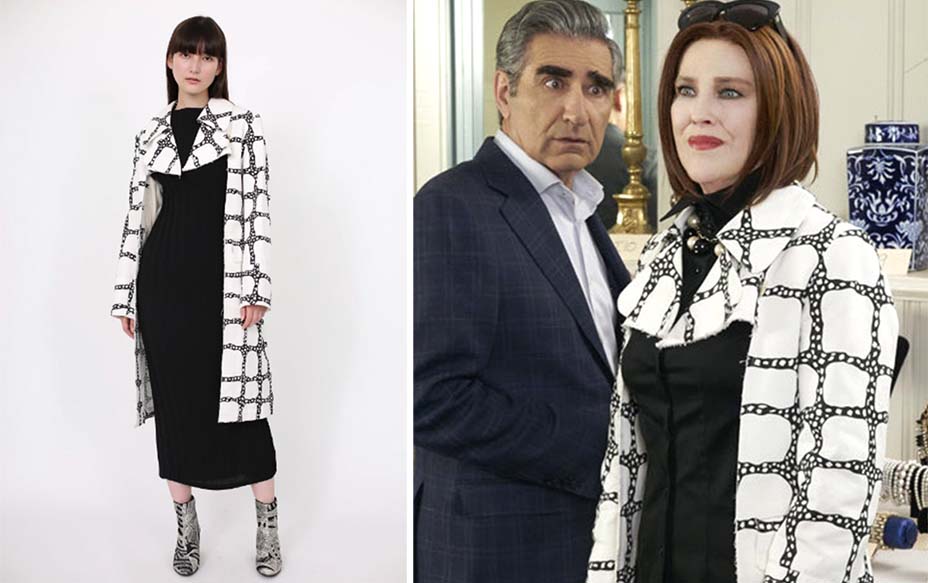 A portion of the proceeds from the sale will go to GLSEN (Gay, Lesbian & Straight Education Network), which aims to create safe and affirming schools for all, regardless of sexual orientation, gender identity or gender expression. “We are grateful for the support of the Schitt’s Creek cast, crew, and creators for sharing the proceeds of the show’s vibrant fashion with GLSEN,” Eliza Byard, executive director of GLSEN, told THR. “The show sets a beautiful example for young people — including LGBTQ youth — about standing out and always being yourself.”

The cause is one Dan Levy has long been championing. He was honored Saturday with the Davidson/Valentini Award in San Francisco at the GLAAD Gala, presented to him for being an LGBTQ media professional who has made a difference in promoting acceptance for the LGBTQ community. In an emotional speech, Levy recalled his experience of coming out and how that spurred his career in Hollywood, saying he aims to “lead by example.”

“Standing up here, it’s hard not to think back to a very specific time in my life when I was still in the closet,” Levy said during his acceptance speech. “I was in high school [in Toronto], I had a bad faux-hawk because the first Mission: Impossible movie had just come out and I thought Tom Cruise was a real drink of water.”

The Canadian comedian has been as vocal about coming out, as he has about his love of fashion. By opening the Schitt’s Creek closet to the public, he’s once again bringing his two passions together, in this special collaboration. The sale will last as long as the interest in the items does. “We are keeping the pieces for the season,” says Granados. “If we still have them!”