There are underdog stories and then there’s Schitt’s Creek. The Canadian comedy has called the relatively obscure Pop TV network home for five seasons, building a fan base through word-of-mouth and Netflix rewatches before bursting onto the scene this awards season with three nominations. It’s fitting, since the show follows the eccentric Rose family — a wealthy, out-of-touch brood exiled to the Podunk town of Schitt’s Creek once their well has run dry — who also bring change to the spot they eventually learn to call home. Co-creator, showrunner and star Dan Levy, the 35-year-old son of the show’s nominated lead actor Eugene Levy, spoke to THR about the series’ long-awaited moment in the spotlight, its meme-worthy moments and the choice to end with season six.

What’s it been like to receive Emmy attention now, in your fifth season?

Usually, TV shows start big and then, if you’re lucky, you hold your audience. The fact that we have experienced the reverse of that, starting out very small and then gradually building a fan base season after season, it defies logic a little bit. At the end of the day, because we have always been a fringe show, it’s really allowed us the freedom to have fun and focus on the character development. Looking back on it all, I wouldn’t have it any other way because I think it’s what led us here.

You’ve planned for season six to be the last. Does this Emmy recognition make you reconsider that choice?

It’s a very strange thing. I truly believe we made the right choice in ending the show after season six, having just shot all of it. I don’t think I’ll ever close the door on the show. For now, this felt like the right time to say goodbye to this family. Whether we revisit them down the line, if there’s a story that feels necessary, of course I would think about a movie or a holiday special or something. But season six felt like a great time to end on a high note with our fans and to give them exactly what they wanted without overstaying our welcome. When the dust settles, maybe there’ll be an idea that creeps into my head. I know that everyone is more than willing to come back. 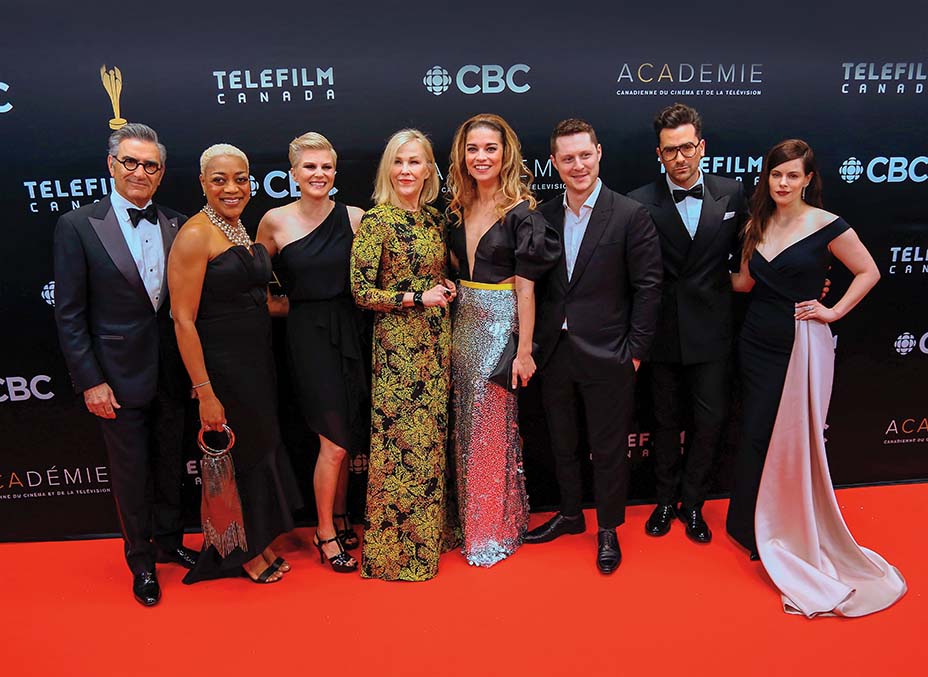 How do you balance the eccentric humor of these characters with the tough issues this show tackles?

If your characters are grounded in something real, you can push them comedically to these different limits. You can introduce wigs. You can make the jokes. You can write the eccentricities of all these characters if they’re grounded in something truthful. We’ve always looked at the show as a drama that happens to have colorful characters and funny circumstances — but never forgetting that there is a heartbeat to the show. At the end of the day, as funny as it is, it’s really a show about acceptance and love. That philosophy has allowed us to walk that tightrope of comedy and drama and not have either of the two feel too heavy.

TV has approached queer storylines in the same way for so long. By not emphasizing David’s sexuality or showing a struggle with it, how do you hope to change the way we see these kinds of stories onscreen?

The town of Schitt’s Creek is essentially a projection of a world that I would want to live in and a world that, I think, shows that loving one another is the most important thing you can do and leads to a happier life for everyone. It was a conscious choice to not show the other side on our show, to not show the sort of negative effects, the homophobia, the bigotry. I think in a way, it’s that positivity that has really made people feel safe when they come to watch the show. It’s a pleasant half-hour of TV where you don’t have to worry about some of the really heavier sides of life. 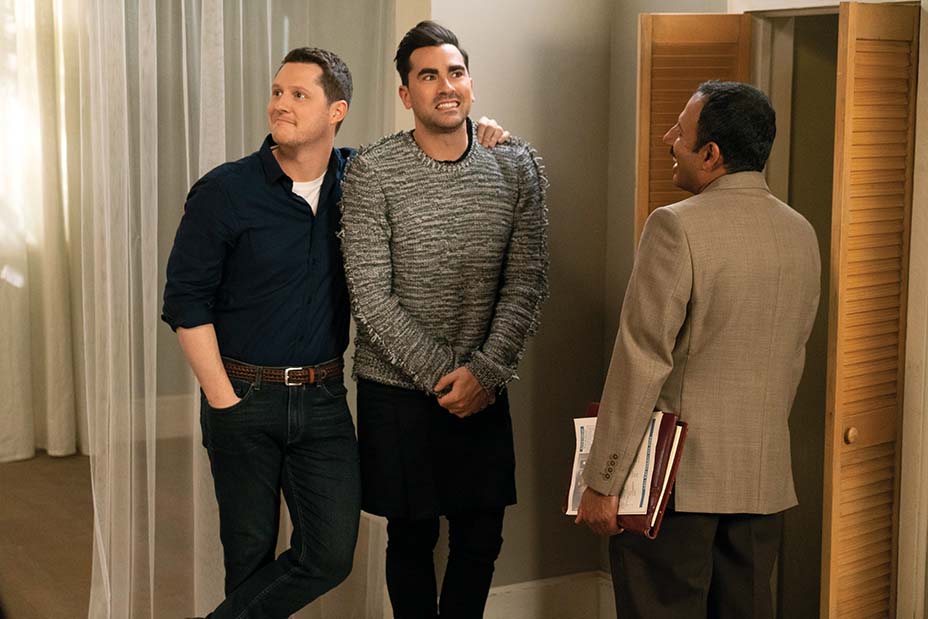 There are plenty of Schitt’s Creek GIFs and memes floating around the internet. How do you feel about the show’s social media legacy?

I’m quite proud of the meme legacy this show has left behind. A lot of that I have to attribute to the Schitt’s Creek social media manager, who has done an unbelievable job of turning this show into something so much more than just a show. I’m seeing my face in random text conversations with strangers — it’s the strangest. I’m like, “Well, I guess that’s just how my face looks.” It’s been truly wild.

What was your best day on set?

I wrote an episode where my boyfriend on the show comes out to his parents through a surprise party gone wrong. I was really proud of the episode. I was proud of the performances. I was proud of the message that we were trying to put out there. We touched on something that was real for a lot of people. To me, that’s a testament to the strength of our team, where you can execute something as heavy as a character coming out to their parents and still not lose the humor and the love of the show. As a gay person in TV, the opportunity to tell those stories is really meaningful for me.

When I’m in the process of writing, I’ll watch TV that’s as far away from comedy as I can — Chernobyl or Sherlock, dark and twisted things. I don’t know whether that’s a good thing or not, but it’s something that seems to settle my brain. But if we’re trying to break a certain story, I’ll bring up scenes from other shows that have handled certain topics well. In terms of the coming-out episode, I had our team watch the coming-out episode in Please Like Me because I wanted them to see the kind of sensibility of a comedy that tackled something quite heavy — and I think it’s such a great show. I showed other coming-out episodes from different shows like Dawson’s Creek, just to get a sense, but it was never, “I want to do something like this.” It was, “These are examples of shows that got it right.”

If there’s something to be said for the element of surprise, something should also be said for Schitt’s Creek. The cult Canadian comedy, which airs stateside on fringe cable net Pop TV, shocked many when it made its way into the Emmys for the first time in its fifth season. Acting mentions for leads Eugene Levy and Catherine O’Hara seem to be just as much recognition for decades in the industry as they are for the pair’s outlandish performances. The two veterans probably stand a better chance than the show itself — though, as likely the least-watched nominee in the race, Schitt’s Creek is thusly the least likely to win. But damn if it isn’t a welcome addition. —Michael O’Connell

Schitt’s Creek’s nominations (for comedy series, costume design and lead acting for Eugene Levy and Catherine O’Hara) not only were the first for the series but also the first for its CBS-owned network, cabler Pop TV. “I’m sweating, I’m so excited,” Brad Schwartz, president of Pop TV, told THR on the morning of July 16, when the nominations announcement was made.

Schwartz was on his way out of town to celebrate his wedding anniversary but said he fired off “holy shit!” emails to Levy, O’Hara and Dan Levy, who co-created the series with his dad. “For a show to break through on a — call it a smaller network — a show has to be that much more special,” he said. “To not be on HBO or Showtime or Netflix, to not have the marketing budgets and FYC campaigns those organizations can put behind [their shows] and to break through not just with best show but best actor, best actress, best costumes, the show has to be that much more special. They made something that was so fantastic, it didn’t matter where it was. People found it and loved it.”

Pop TV also was recently in the spotlight when the network successfully teamed with producers Sony TV to revive the Latinx-themed One Day at a Time reboot for a fourth season, months after Netflix’s decision to cancel the beloved series. With the final season of Schitt’s Creek on the horizon, Schwartz told THR it will be great “to have another critically acclaimed, fan-adored series to pick up the mantle.” — Tara Bitran