Scott Wilson, the Georgia-born actor admired for the intensity he demonstrated in such dark, disturbing projects as In Cold Blood, The Walking Dead and The Ninth Configuration, has died after a battle with cancer. He was 76.

Details were not immediately available, but the official Twitter account for the Walking Dead comic book, on which the popular AMC show of the same name is based, confirmed the news Saturday. “We are deeply saddened to report that Scott Wilson, the incredible actor who played Hershel on #TheWalkingDead, has passed away at the age of 76,” the statement read. “Our thoughts are with his family and friends. Rest in paradise, Scott. We love you.”

At New York Comic-Con 2018, Walking Dead showrunner Angela Kang announced that Wilson would reprise his role as Hershel in season nine — which premieres Sunday — though she offered no word on the timing of his appearance or how many episodes in which he was slated to appear. However, sources have confirmed that Wilson had filmed some scenes. The announcement was made a little more than an hour before news of Wilson’s passing spread on social media.

In a statement to The Hollywood Reporter, a spokesperson for AMC said: “Scott will always be remembered as a great actor, and we all feel fortunate to have known him as an even better person. The character he embodied on The Walking Dead, Hershel, lived at the emotional core of the show. Like Scott in our lives, Hershel was a character whose actions continue to inform our characters’ choices to this day. Our hearts go out to his wife, family, friends and to the millions of fans who loved him. Scott will be missed.”

Wilson also was memorable in The Great Gatsby (1974), where his character, the owner of a filling station, shoots and kills Jay Gatsby (Robert Redford) while he’s lounging in his mansion swimming pool, then turns the gun on himself. He often brought anxiety and melancholy to his roles.

After portraying the murder suspect Harvey Oberst in his first feature, the best picture Oscar winner In the Heat of the Night (1967), Wilson was cast as real-life murderer Dick Hickock for In Cold Blood (1967). The chilling documentary-like drama was directed by Richard Brooks, who also adapted Truman Capote’s sensational 1965 best-selling novel for the screenplay.

Hickock had met fellow drifter Perry Smith (played by Robert Blake in the film) in jail, and after they were paroled, they headed to a farm in Holcomb, Kansas, for a robbery. Finding little cash on hand, they killed four members of the Clutter family — the husband, wife and two of their teenage children — in 1959. (The pair spoke with Capote for the book before being executed in 1965). 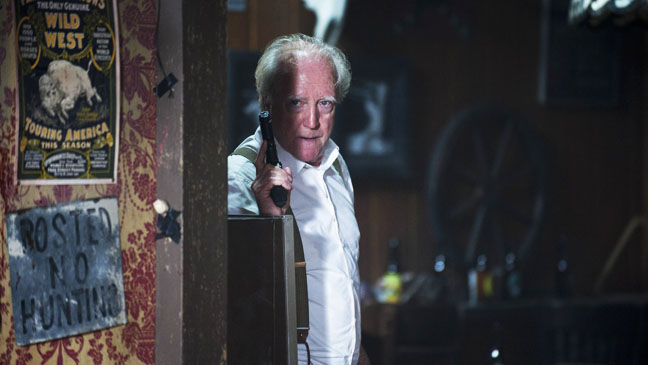 Wilson, then 24, got the job in part because of his resemblance to Hickock.

“Every actor in the English-speaking world wanted those two roles, including [Paul] Newman and [Steve] McQueen,” Wilson recalled in a 1996 interview with the Los Angeles Times. “Brooks hired two ‘unknowns,’ and he wanted to keep it that way. We were treated like two killers he had somehow run across.”

Wilson, Blake and Capote posed on a dusty stretch of Kansas highway for the cover of Life magazine on May 12, 1967, with the headline “Nightmare Revisited,” though the young actors went unidentified on the front. And for a billboard on Sunset Boulevard in Hollywood, Wilson noted, “Brooks had the poster with our eyes taken down and replaced with one of the real killers’ eyes.”

Murder scenes were filmed on location at the Clutter home.

Brooks set up a private screening for Wilson and Blake after the movie was finished, and “after seeing the film, I went to the restroom and threw up,” he told Elvis Mitchell in a 2017 interview. “I realized what I had just seen. I was part of something that would stand up for a period of time, a classic.”

The blue-eyed Wilson, now with a bushy white beard, saw his career revitalized in 2011 when he joined AMC’s The Walking Dead in the second season as Hershel Greene, a stubborn farmer and veterinarian who loses a leg before eventually meeting his end — by decapitation — in season four. (Fans were very sorry to see him go.) He filmed the series in his home state of Georgia.

As Hershel, Wilson often provided the sage voice of wisdom in the ear of lead character Rick Grimes (Andrew Lincoln) and other survivors of the apocalypse. Wilson told THR he never auditioned for the role: “My rep called and said they were interested in me for two to three episodes,” he said. “I asked what show it was about and they said zombies. I said, ‘Give me some good news.'”

After watching the first season, Wilson was more encouraged about his future with The Walking Dead. “I hadn’t done a lot of TV at the time,” he said. “I did CSI and played Marg Helgenberger’s father and got that after working with Danny Cannon on a film. I found it very interesting working on Walking Dead because I’d never really played the same character for that amount of time; it’s different than doing a play or film.”

Co-star Khary Payton, who portrays Ezekiel on the show, shared his condolences: “The first time I met Scott Wilson, he gave me a big hug and said that this thing I had become a part of … was a family. He said I had a responsibility to take care of it. I have tried very hard to do that, sir. & I will continue. I promise. See you on the other side, my friend.” Fellow TWD actor Michael Cudlitz added, “Rest easy my friend.” And Jesus actor Tom Payne said, “Goodbye Scott Wilson you absolute legend.” Chandler Riggs, who played Carl through eight seasons, said that he will “never forget the things you told me and the time we spent together on set.”

“Scott was one of the greats, both as an actor and a man,” said Walking Dead executive producer Gale Anne Hurd. “We in #TheWalkingDeadFamily are truly grief stricken. He lived life to the fullest with his true love, his wife Heavenly. He is now a shining star in heaven spreading kindness and light forever.”

In the psychological thriller The Ninth Configuration (1980), written and directed by William Peter Blatty of Exorcist fame, Wilson played Captain Billy Cutshaw, a former astronaut in an insane asylum for military personnel, receiving a Golden Globe supporting actor nomination for his work.

He also portrayed a prison chaplain in Sean Penn’s Dead Man Walking (1995), and his character, a john, was slain by Charlize Theron’s victim turned serial killer in Patty Jenkins’ Monster (2003).

For a performer of his obvious ability, Wilson went lengthy stretches without working. He filled one slow period by painting drug stores.

“Not many people survive a long period of time as actors,” Wilson told the Cleveland Plain Dealer in 2016. “I’ve been fortunate to have a long career and play a variety of roles. I’ve had my down periods. I went four years without work. You have stretches where it feels like starting over. But a lot of people never even get the first break. You’re incredibly fortunate if you get that.”

William Delano Wilson was born in Atlanta on March 29, 1942. After the death of his father, he graduated from Thomasville High School in 1960 and was awarded an athletic scholarship to Georgia’s Southern Polytechnic State University.

Wilson, though, didn’t stay in school; instead, he spent three days hitchhiking to Los Angeles, arriving with $40 in his pocket. One night, he got drunk and wound up in an acting class.

“At the end of the class, the teacher came up to me and said, ‘I don’t know what your problem is; don’t come back to my class drunk,'” he recalled in a 2012 interview. “I went back the next week to apologize. He gave me a monologue to do from a Eugene O’Neill one-act play, The Long Voyage Home. I came back the next week and did it and said, ‘This is it, this is what I want to do.'”

Wilson spent the next five-plus years participating in acting classes and workshops and appearing in local plays like Oscar Wilde’s The Importance of Being Earnest.

His friend’s stepfather was an agent who introduced Wilson to casting director Lynn Stalmaster, who recommended the untested actor to director Norman Jewison and producer Walter Mirisch for In the Heat of the Night.

“It was heaven,” he told Mitchell. “Here I was parking cars and pumping gas and doing odd jobs to support myself, then all of a sudden I’m working with people that you talk about in acting class.” His Southern accent, which he had been trying to lose, helped him get the job.

Wilson bonded with In the Heat of the Night star Sidney Poitier, who recommended him to Brooks for In Cold Blood. (Wilson was 6 when he met Blake the first time, getting an autograph from the actor who was then playing Little Beaver in a series of Westerns at Republic Pictures.)

Wilson later starred as a private who falls in love in postwar Poland in Krzysztof Zanussi’s A Year of the Quiet Sun (1984), which won the Golden Lion at the Venice Film Festival, and reteamed with the Polish director in Our God’s Brother (1997), a film adaptation of a play written years earlier by Pope John Paul II.

Wilson also recently had gigs on such TV shows as Bosch, The OA and, from Walking Dead showrunner Glen Mazzara, Damien. His Bosch co-star Titus Welliver was one of the first to comment on Wilson’s passing on Saturday night. “Scott Wilson has departed. I am heartbroken. We are fewer. Go easy into the light brother,” he wrote on his Twitter account.

Survivors include his wife, Heavenly, an artist and attorney whom he married in 1977. His mother, Jewell, died in March 2017 at age 102.

All in all, Wilson told the Atlanta Journal-Constitution in 2011, he “accomplished more than I would have hoped to have accomplished. I don’t want to be a big movie star. I can be someone who walks the streets and not get mobbed. Yet I want to be as fine an actor as I can be. I am still striving for that — to be as good as I can be.”

Josh Wigler contributed to this report.