Bowers helped keep the (often queer) secrets of contract players who were bound by morality clauses during the heyday of the studio system. His life as a sex worker, servicing the entertainment industry in the post-World War II period, challenged Hollywood’s baseline-heterosexual conception of itself.

“His story, which he waited to tell until he was in his late 80s — and for years refused to tell at all — forms an astonishing counter-narrative of Hollywood and exposes the mores of the movie capital in a time when gay men and women were forced to be sexual outlaws and were publicly shunned and often persecuted, or at least forced to live double lives,” Tyrnauer, Scotty‘s helmer, told THR. “Scotty was a central figure in the gay underground of Hollywood and served as a trusted protector of his friends and associates lives when they had no alternative but to live in the shadows.”

George Albert “Scotty” Bowers was born on July 1, 1923, in Ottawa, Illinois. After weathering the Great Depression in Chicago during the ’30s — “I had to sell 10 Chicago Tribunes to make a penny in the street,” he said — Bowers joined the Marine Corps and fought during World War II. Upon returning from combat, where he lost his brother and several close friends, he relocated from San Diego to Los Angeles simply because, in his words, he “loved the weather.”

A handsome 23-year-old, Bowers quickly found work as an attendant in 1946 at the Richfield Oil gas station at 5777 Hollywood Blvd., at the corner of Van Ness Avenue. (The property now hosts a fire station.) What started as a job pumping gas turned into something more salacious when Bowers met actor Walter Pidgeon, known for his work in Mrs. Miniver and Madame Curie. The Canadian actor invited Bowers to jump into his Lincoln, marking Bowers’ first entree to Hollywood society.

The ride, which Bowers said led to a brief affair between the men, would change Bowers’ life as it kick-started a side career arranging liaisons for stars, a business he would later describe as sexual matchmaking. According to Bowers, Pidgeon spread the word about his new friend, and soon other notable Hollywood figures were stopping by the station for trysts and to be set up with Bowers’ network of prostitutes — both men and women. In order to keep up with the demand, he started to invite “clients” into a trailer parked at the service station.

Bowers also became a bartender for hire at many well-heeled Hollywood events, during which he became familiar with major A-list stars of the Golden Era. He would claim to have set up or slept with a long list of beloved actors, including Cary Grant, Randolph Scott, Bette Davis, Charles Laughton, Elsa Lanchester, Spencer Tracy and Hepburn.

“There was a big level of secrecy,” Bowers once explained about the business he ran, which had largely remained a secret until the publication of his memoir, Full Service: My Adventures in Hollywood and the Secret Sex Lives of the Stars.

Bowers also developed trusted relationships with many of his clients; people like acclaimed director George Cukor, for whom he provided more than sexual favors — he did landscaping, shopping and other assistant-style jobs. “When you had to live your life in the shadows like this but were also prominent, imagine how important someone who could be trusted in all aspects, including the secret aspects of your life, could be,” Tyrnauer said of Bowers’ ties with Cukor.

It was the trust aspect that truly propelled his work, Bowers had said, a fact that made his revelations that much more shocking to those who had followed the lives of the stars. 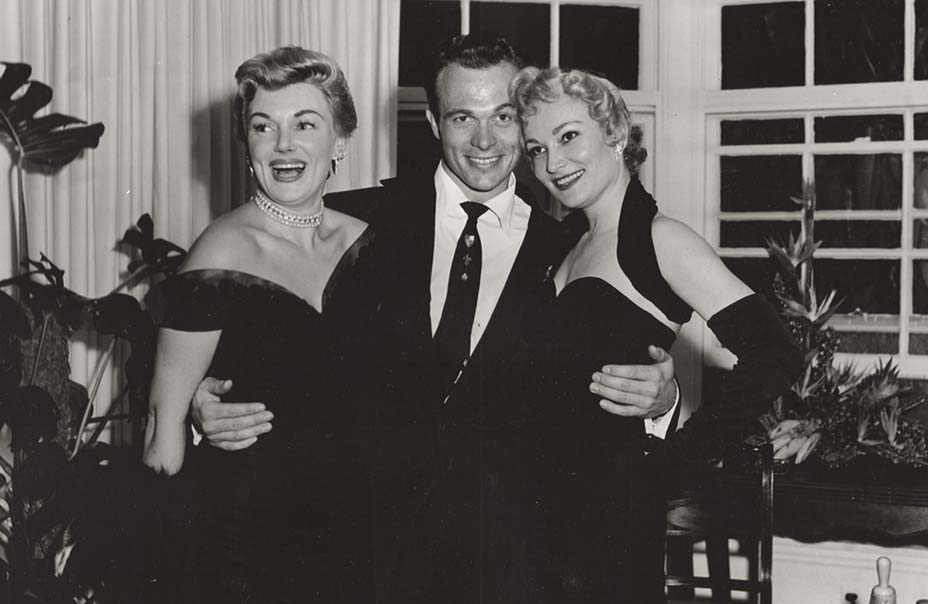 Revealing those secrets was not always universally embraced. New York Times critic Janet Maslin wrote “supposedly true” about the book’s revelations, while The Telegraph‘s Lewis Jones challenged readers to digest it “as fiction.” Bowers always shrugged off the criticism, even revealing that he decided after many decades to open up about the sex lives of the stars because many of them treated him with such respect.

“Yet, you might say, ‘If they trusted you and liked you, why are you doing this now?’ Well, it’s sad, because everyone is gone, and I do mean everyone. It does bring a tear to my eyes, thinking of all the nice people I knew. I was just thinking about Vincent Price. Remember Vincent Price? Such a sweetheart of a guy. And Randolph Scott, Cary Grant, all nice, all gentlemen. Niceness, kindness, sweetness is the answer to everything. Thinking of them all, how great and kind they were, regardless of what they did in bed. That’s another reason why I did this,” he said.

The book was followed six years later by Tyrnauer’s Scotty and the Secret History of Hollywood, which refers to Bowers as “the premier male madame and sex worker of Hollywood’s postwar period.” The cinema verité documentary followed the genial, nonagenarian Bowers (and his droll, put-upon wife, Lois) as he reflected on his decades of facilitating others’ pleasure — which effectively ended when he retired during the AIDS crisis.

“At a certain point, anyone who reads Bowers’ book or sees this film has to decide whether to believe him or not,” mused The Hollywood Reporter’s chief film critic Todd McCarthy in his review. “At this stage, there is no reason not to; Scotty does not seem remotely like a braggart or someone desperate for a sliver of late-in-life fame. He was always ultra-discreet and, incredibly, says he was never paid for sex by the stars he serviced; he made his money as a bartender at the private parties where he would then arrange liaisons. As he politely puts it, he ran ‘an introduction service.'”

While candid on many topics in the book and the film, Bowers avoided discussing the death of his only child, Donna, in the late 1960s. He also notably shrugged off modern views of molestation and power imbalances when neutrally recalling how, as a pre-teen in Depression-era Chicago, priests would pay him for sexual favors.

During an interview with THR at the time of his doc’s release, Tyrnauer noted that Bowers’ business was so widespread, he was known, in many ways, as “the mayor of the sexual underground of the city” for decades, a title that he knew was controversial. “It’s interesting and alarming that people have an adverse reaction to hearing about the true lives of people who are important and iconic historic figures in our culture,” he said. “If you straight-wash the biography of Cary Grant, I don’t think you’re doing anyone a service.”

In July 2018, Bowers received a citation from the City of West Hollywood for his role in local LGBTQ history. “It’s been said with a wink that Scotty Bowers helped put the ‘wood’ in Hollywood from the 1940s to the 1980s,” Mayor Pro Tempore John D’Amico, who presented Bowers with the proclamation, told THR.

Bowers’ wife died last year. He is survived by his sister, Phyliss. Details regarding a memorial service have yet to be announced.