An Oct. 5 press release from Outfest announced that Sean Hayes would be awarded the Trailblazer Award at the org’s annual Legacy Awards while praising the actor for his work on a show that made him an Emmy-winning star.

In fact, a quote attributed to Outfest executive director Christopher Racster went like this: “Sean Hayes’ portrayal of Jack on NBC’s Will & Grace took the stereotypical gay sissy and made him human, lovable, flawed and real. … Jack lived in a land where it was OK to simply be Jack — open, honest, funny, and real.”

The gala took place on a rainy Sunday night at Vibiana in downtown Los Angeles, and Hayes showed up to humbly receive his award and share the stage with fellow honorees, including Transparent creator Jill Soloway and Freeform network president Tom Ascheim, who received the Visionary Award and the Corporate Trailblazer Award, respectively.

But Hayes also used the occasion to politely take issue with Racster’s quote. In doing so, he delivered something that was less a typical acceptance speech and more like a mea culpa.

“[The press release] said that I took the stereotypical gay sissy and made him human, lovable, flawed and real. While this may be true, I think you should’ve led with flawed because at the time, I was a young closeted actor having his first taste of a little success and unfortunately, in my mind, my lucky break was inextricably tied to me thinking that I had to stay in the closet in order to keep moving forward,” Hayes said, receiving his award from longtime friend Dax Shepard, who was equal parts genuine and hilarious. “Looking back at my choice to stay silent, I am ashamed and embarrassed. What was I thinking? As If any of you had any doubts. I mean, right, could a straight actor ever do this…?”

Then Hayes — much to the rapturous delight of the capacity and predominantly gay crowd of several hundred guests — belted out his infamous Cher impression (the same one he performed on Will & Grace alongside the gay icon herself) singing the title lyrics from her 1989 hit “If I Could Turn Back Time.” In that moment, Hayes lit up the room, showing why his work as Jack McFarland garnered him seven Emmy nominations over the course of the show’s eight seasons. His one win, in the year 2000, secured his place in history as the first actor to win an Emmy for playing an openly gay character.

But also in that moment, which lasted less than a handful of seconds, the lyrics moved beyond a silly Cher impression and proved to have a more impactful meaning when put in the context of what Hayes was saying. If only he could turn back time, he would.

“When it comes to nights like tonight and honors like this, I’m consumed with what I didn’t do,” admitted Hayes. “I know I should’ve come out sooner and I’m sorry for that. Especially when I think about the possibility that I might have made a difference in someone’s life. I would probably be able to sleep a lot better than I do if I had acted sooner, but such is life. We learn our lessons only when we are ready.”

It’s not the first time that Hayes, 46, has admitted to harboring regret over his journey to coming out of the closet. (He came out in 2010, several years after Will & Grace ended its run.) While promoting his turn as God in the Broadway play An Act of God earlier this year to Playbill, Hayes shared similar emotions. Before that, he also opened up on the topic to the Los Angeles Times in 2013. On Sunday night, however, he turned the revelation into a compliment, thanking those in the room for their part in blazing trails toward equality. He also paid respects to Outfest and its Legacy Project.

“Today I stand before you as a proud gay man, and I humbly accept this award on behalf of all of us. This award is as much mine as it is yours,” he concluded.

Apologies aside, Hayes’ generosity of spirit is something that sets him apart, Shepard noted while presenting his friend of more than a decade with the Trailblazer honor. “Sean is the guy that will talk to the barista at Starbucks for 20 minutes about her aspirations. He is generous to the point of being a communist,” said Shepard, adding that Hayes “exudes light. … He brings a gift even when it says not to bring a gift, just to rub everyone’s nose in it. I have never been to his home where he has not had a friend or family member living at the house either going through a divorce or kicking an addiction or recovering from an illness. It’s like a Lifetime reality show at his house all the time.”

Sunday’s Legacy Awards — featuring a menu by head chef Neal Fraser of Vibiana-adjacent restaurant Redbird and presenting sponsorship by Merrill Lynch — served as a fundraiser to support the Outfest UCLA Legacy Project, which celebrates its 11th anniversary this year. Outfest and UCLA Film & Television Archive partnered in 2005 to create the Outfest UCLA Legacy Project, the only program in the world exclusively dedicated to saving and preserving LGBT moving images.

Some of those moving images today come in the form of TV series that feature out characters, shows like Transparent and Freeform’s Pretty Little Liars, The Fosters and Shadowhunters. That’s why Soloway and Ascheim went home with awards. The latter picked up his trophy following presentations by actresses Shay Mitchell and Sherri Saum. Also onstage was Harry Shum, who served as master of ceremonies. The actor currently stars (as a bisexual warlock) on Freeform’s Shadowhunters.

Soloway saw her Transparent stars Jeffrey Tambor and Amy Landecker take the stage before her, each delivering touching tributes. Landecker joked about a scene in Transparent that saw the actress’ naked butt being flogged. “Whenever Jill is behind the camera, I’m happy to show it all to the world. When Jill is creating, you know it’s going to be brilliant and funny and sexy and moving and important,” said Landecker. “And the truth is, I would follow her anywhere, do anything, anytime. And I really do hope to bare my ass and my soul for her for as long as possible.”

Tambor thanked the writer-director-producer for giving him the “biggest, joyous responsibility” of playing trans woman Maura Pfefferman, a role that has earned him a slew of accolades including back-to-back Emmy Awards. Soloway also took home an Emmy at the recent telecast, delivering a widely publicized acceptance speech where she encouraged those watching to “topple the patriarchy.”

About her crowded mantelpiece, Soloway told The Hollywood Reporter on the red carpet that it mostly seems unreal. “Almost all of it seems totally imaginary and made up,” she explained, before relaying what the response was to her “patriarchy” rally cry. “It’s interesting how much the world has been evolving in the past few weeks with all of the stuff that has been happening between [Donald] Trump and Hillary [Clinton] as well as with toxic masculinity. It rolled together and felt like the right timing (for the speech) because that’s what people want to talk about right now.”

And what she wanted to talk about onstage was a wide variety of subjects from The Brady Bunch and a new definition of cisgender to taking the gaze away from minority groups and her own sexual identity. She alluded to her journey of self-discovery, something that is continuing. “[I’m having] a late onset gender reunderstanding of myself at the tender age of 51. One pair of men’s boxer briefs at a time, guys,” she joked. “I’m trying to find my gender slowly. … I’m sort of like a 41-year-old Jewish guy named Jeff. That’s how I see myself.”

Like her show, Soloway’s Legacy Awards acceptance speech, parts of which can be seen below, was very well-received. Other guests at the gala included Kimberly Peirce, Peter Paige, Alan Poul, Andrea Sperling, Jen Richards, Tina Mabry and recording artist Samuel Larsen, who performed a pair of songs. 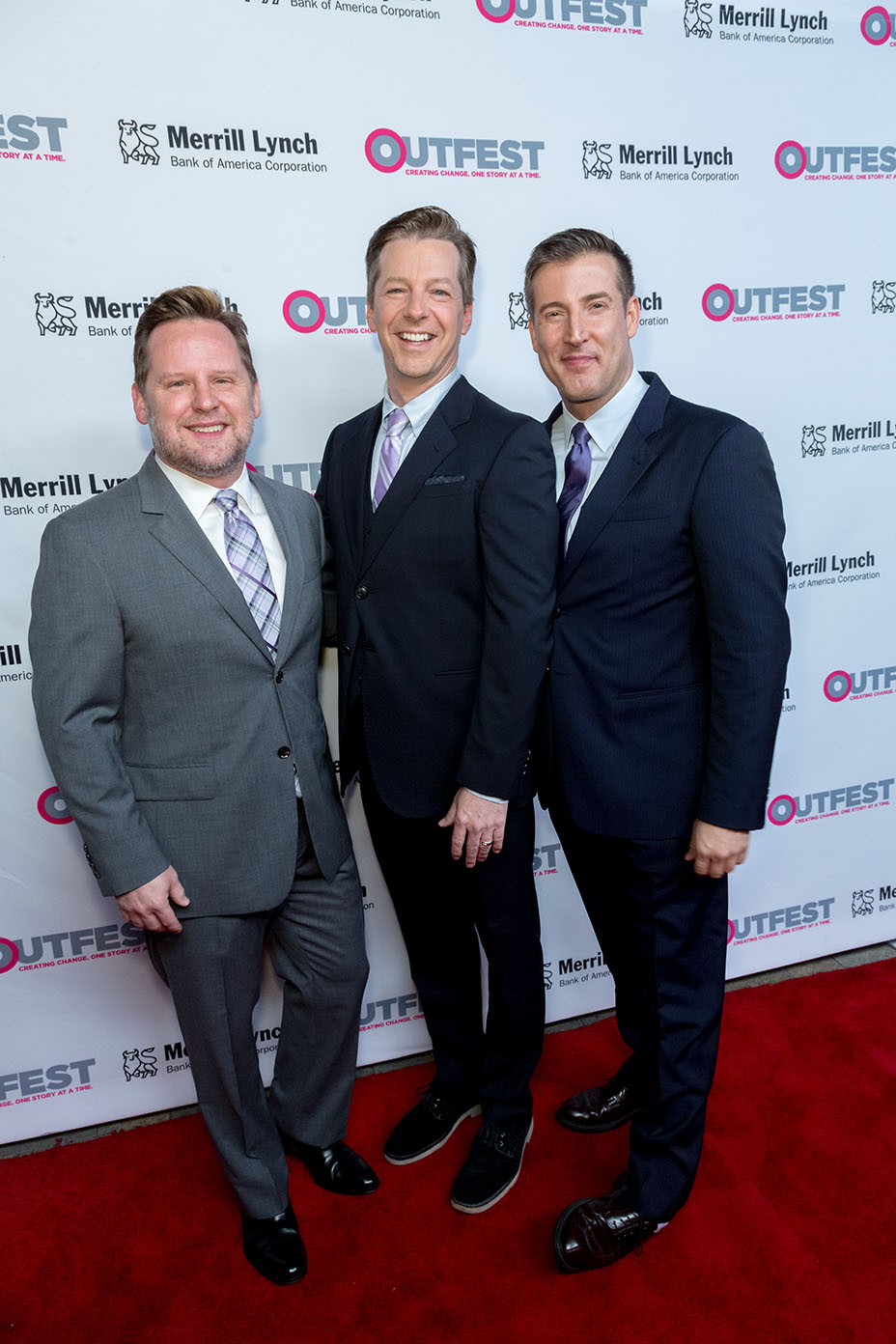 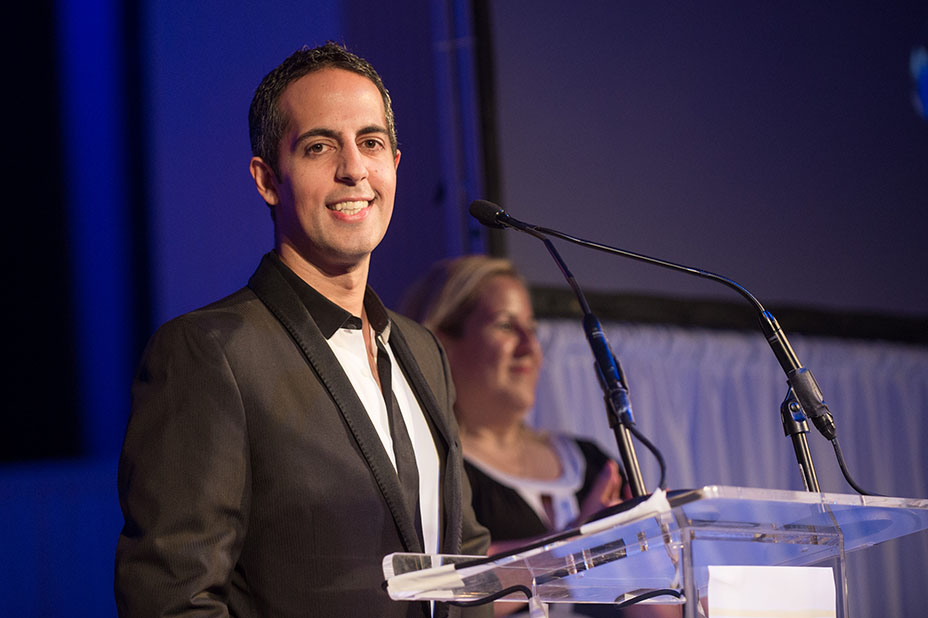 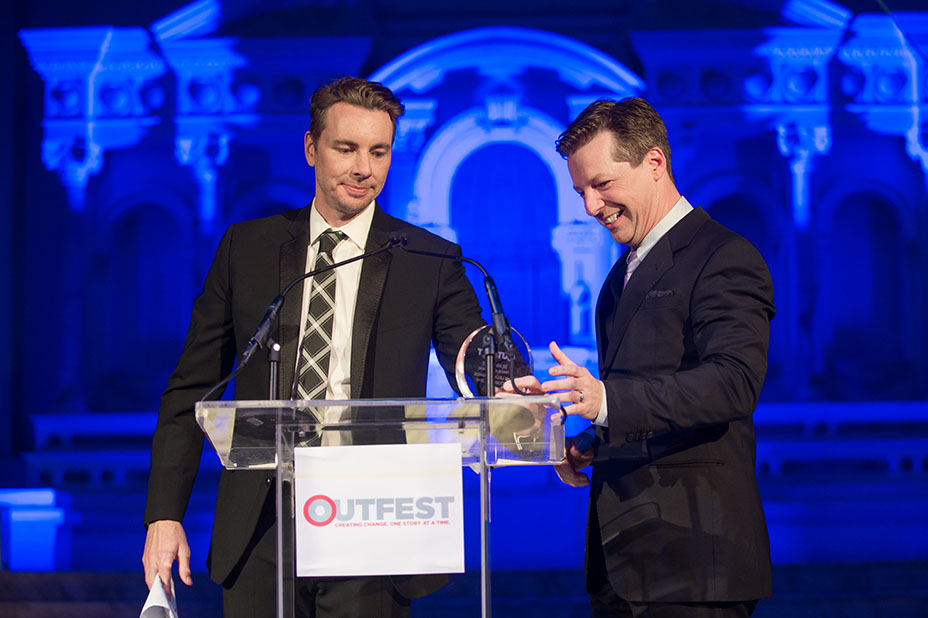 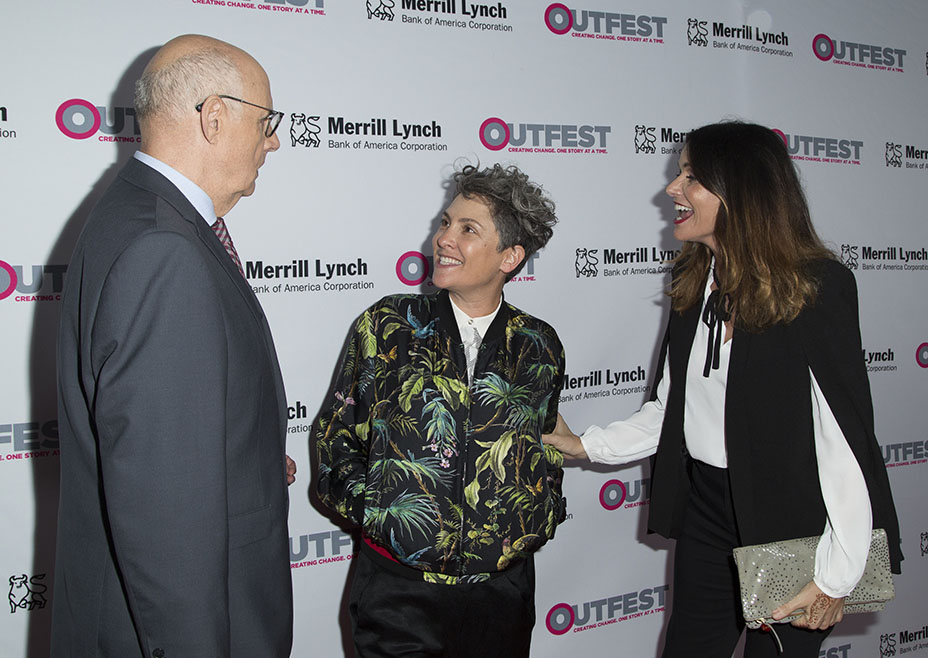 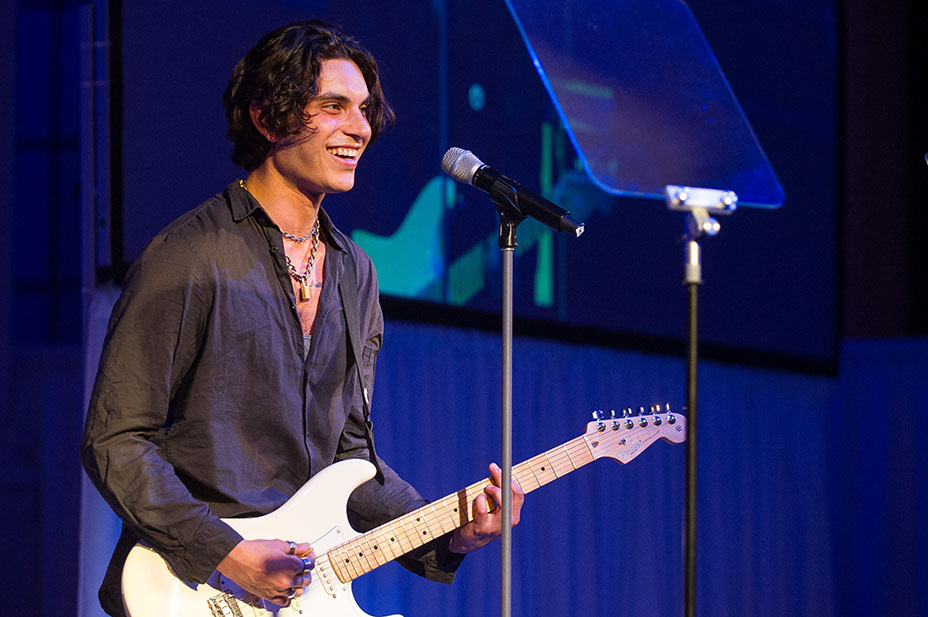 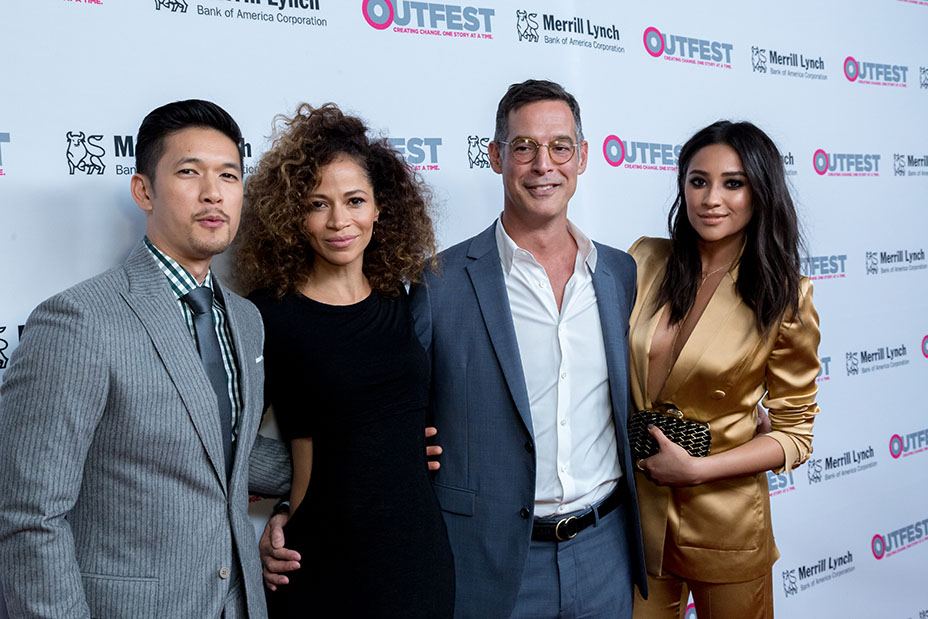 @SeanHayes admits he is embarrassed 4 not coming out sooner, during Will & Grace fame, for he could’ve helped others. #LegacyAwards pic.twitter.com/ChCssFeRnU