There’s something unsettling in the local swamp, but despite what other kids say, it’s got nothing to do with Russell Weinwright. As Kirk Scroggs’ newly announced title The Secret Spiral of Swamp Kid makes clear, despite having algae for hair and a tree trunk for a right arm, Russell might be the most relatable thing in his middle school.

The upcoming title from DC’s new young reader imprint plays on the mythos of DC’s moss-encrusted monster Swamp Thing — even Russell’s last name pays tribute to the character’s co-creator Len Wein — to create something altogether new: a middle school book that’s part-comedy, part-monster story, all as told directly to the reader by Russell, thanks to his love for cartooning in his trusted spiral notebook.

“I knew I wanted to base it on the kid, have it from the kid’s perspective from the get-go,” Scroggs tells The Hollywood Reporter. “I knew I wanted it to be in the format that it’s in, I wanted it to look like a kid’s actual spiral notebook, like it’s coming straight from the source. I thought it’d be kinda nice to see the real Swamp Thing as the mentor character, but really focus on the kid.”

The origin of the eponymous spiral, Scroggs explains, comes from his own childhood.

“When I was at school, I was always drawing in my notebook and getting in trouble because I wasn’t paying attention to the teacher,” says Scroggs. “It’s something that’s close to my heart! My hope is that the format will make kids realize, ‘Hey, maybe I can make my own comic book! I’ve got a spiral notebook, I’ve got my markers, I’ve got my pencils, I’ve got all the tools!’ It has that sense of wish fulfillment.”

Although Scroggs is known primarily for his work on original concepts like Snoop Troop and Wiley & Grampa’s Creature Features, he described the experience of working on a Swamp Thing-related book as being very positive. “DC Zoom has been just a dream,” he says. “All they said was, ‘We want something involving Swamp Thing and kids. Give us your ideas,’ and they went with this outside-of-the-box idea. Even though I was working with a property that’s already established, they let me do my thing.”

It helped that he’s been a fan of Swamp Thing for some time. “I loved all these horror comics — Weird War Tales, Tales From the Crypt,” Scroggs says, explaining why the chance to work on the character was such a thrill. “I’d seen [Swamp Thing co-creator] Bernie Wrightson’s art on some of Stephen King’s stuff, like Creepshow and Cycle of the Werewolf — his art was so amazing, and that sort of led me to Swamp Thing. I had no idea that he’d drawn the original Swamp Thing, and I got so into Swamp Thing visually. I just got obsessed with it.”

Even though The Secret Spiral of Swamp Kid is aimed at younger readers, that doesn’t mean that it hasn’t learned some of the lessons from the original Swamp Thing’s comic book stories.

“My main objective, outside of wanting to write a comic book, was making kids laugh, have fun, maybe be a little scared,” Scroggs teases. “I think it’s hidden in the story that the kid is feeling comfortable in his own skin, which is important, too. I want them to come away from it dreaming of being a superhero themselves.”

The Secret Spiral of Swamp Kid will be released Oct. 1, and will be available to preorder this week. More information about preorders will be available soon via DC’s website. Until then, meet Russell Weinwright in the exclusive preview below. 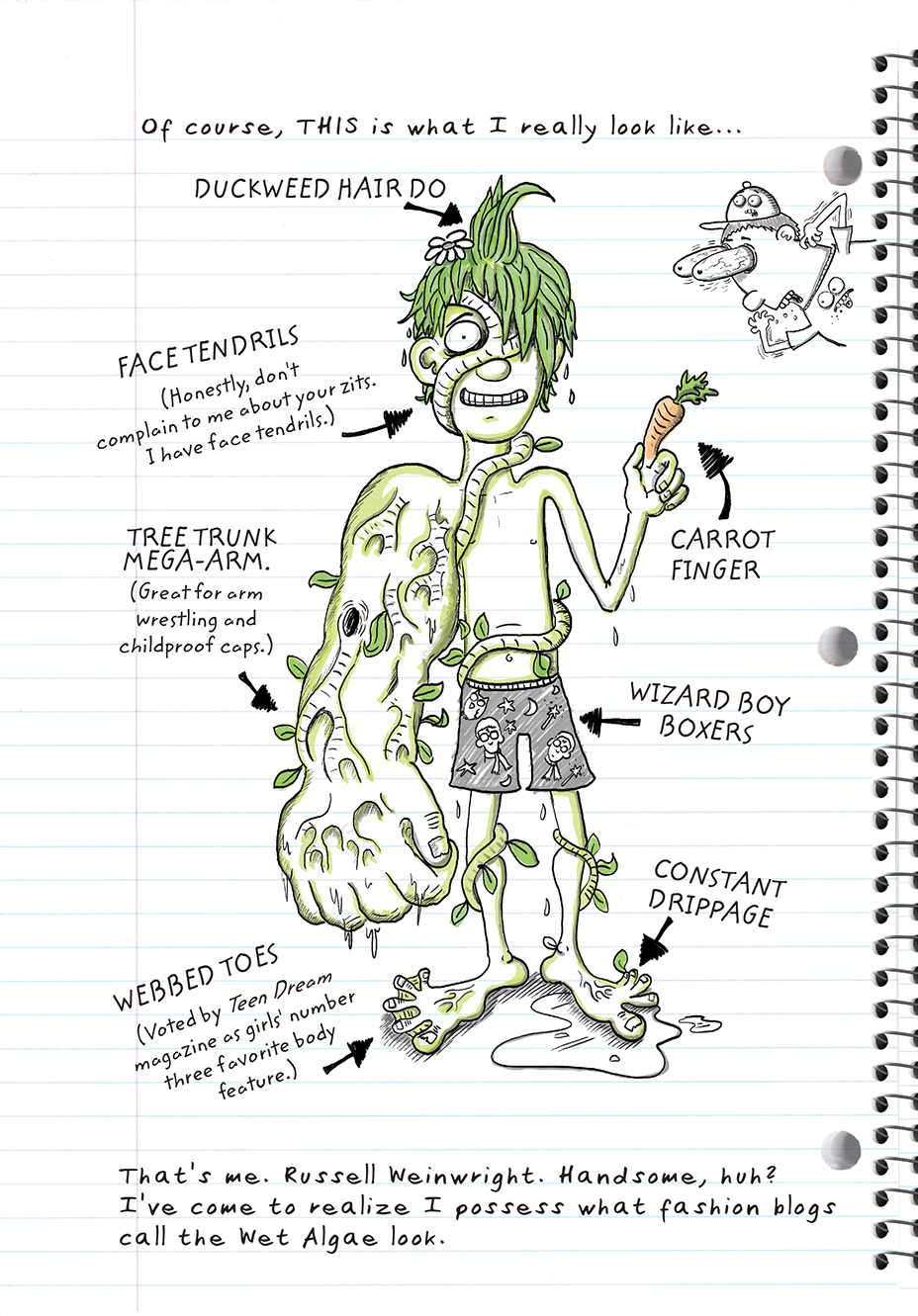 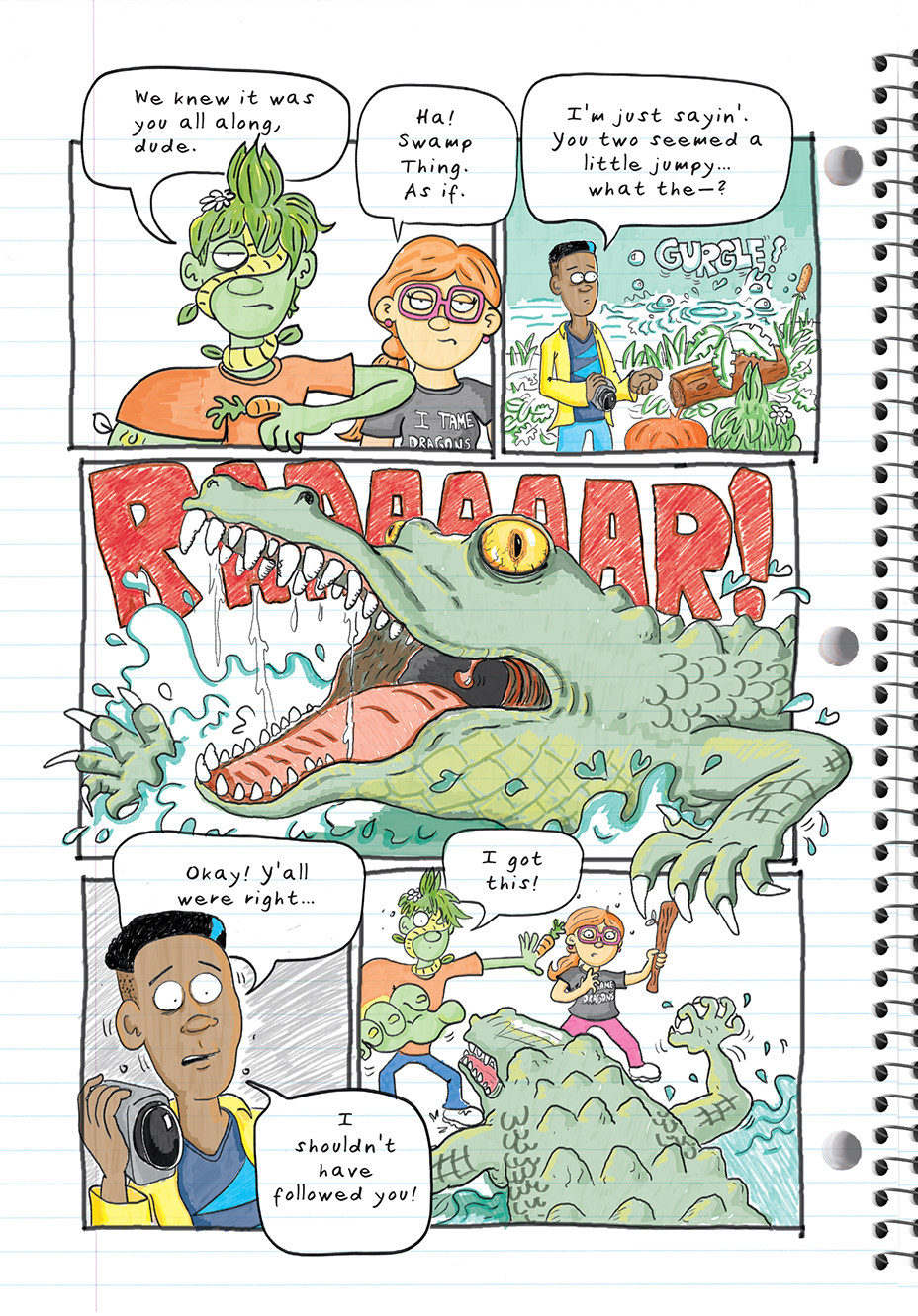 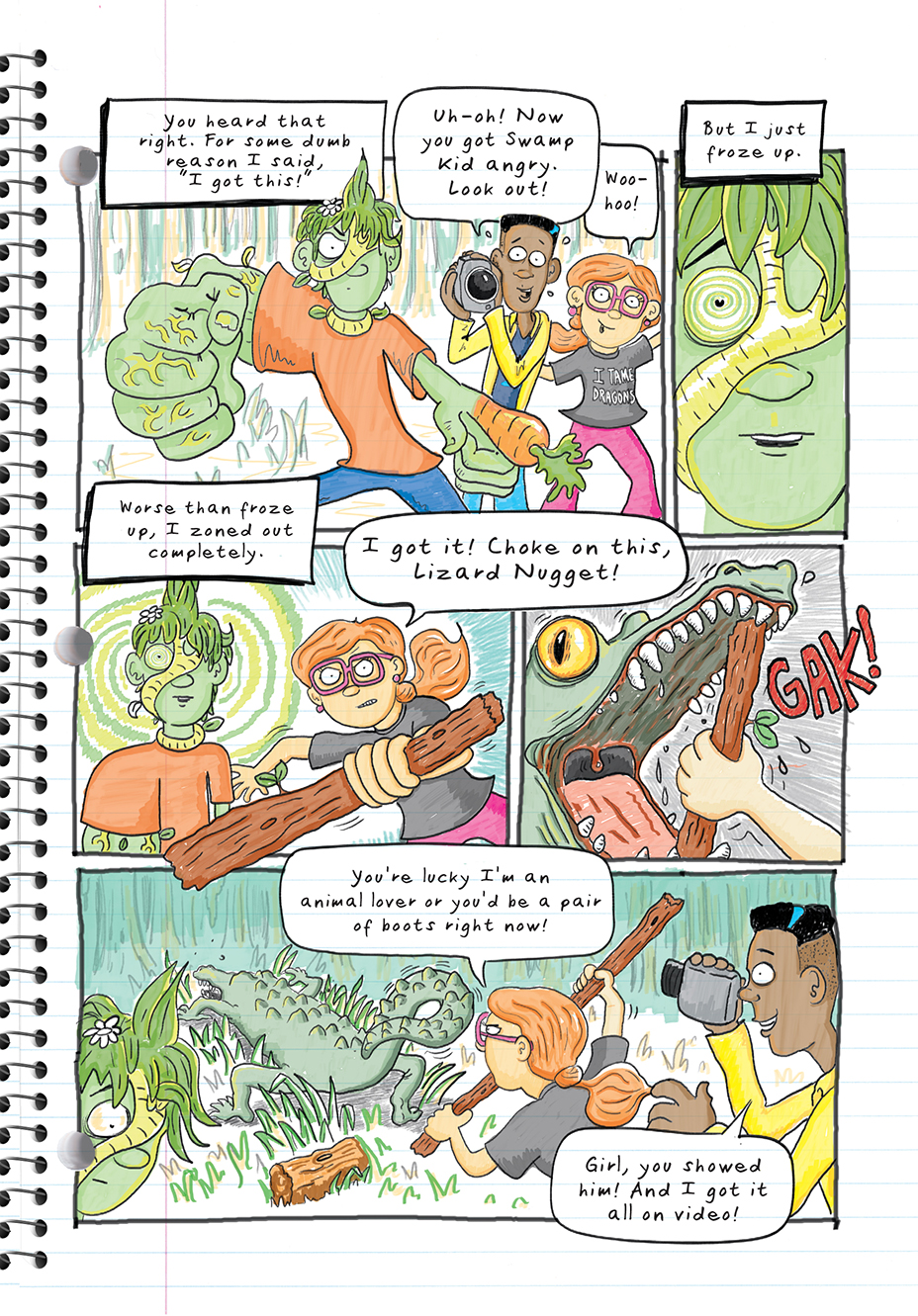 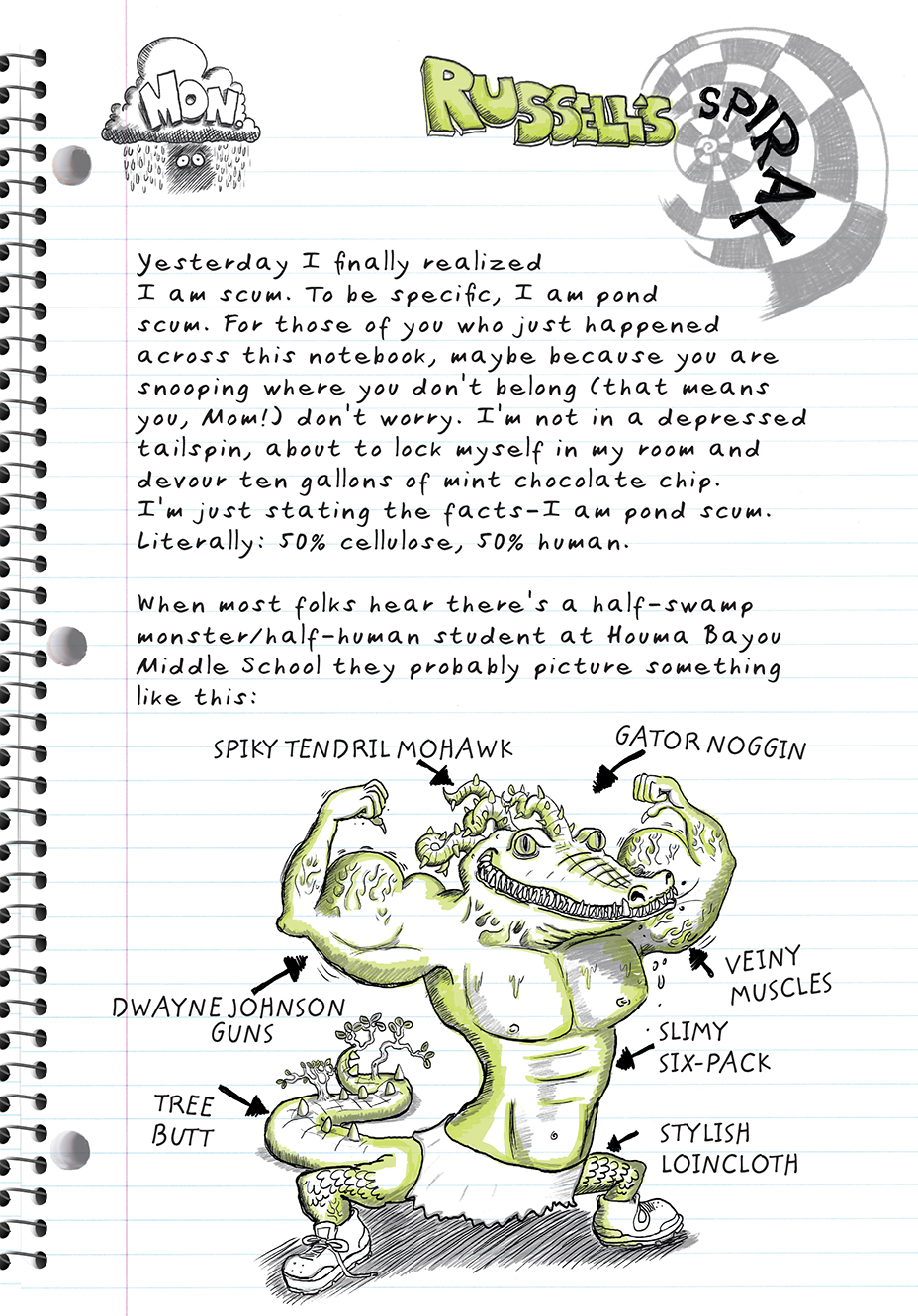 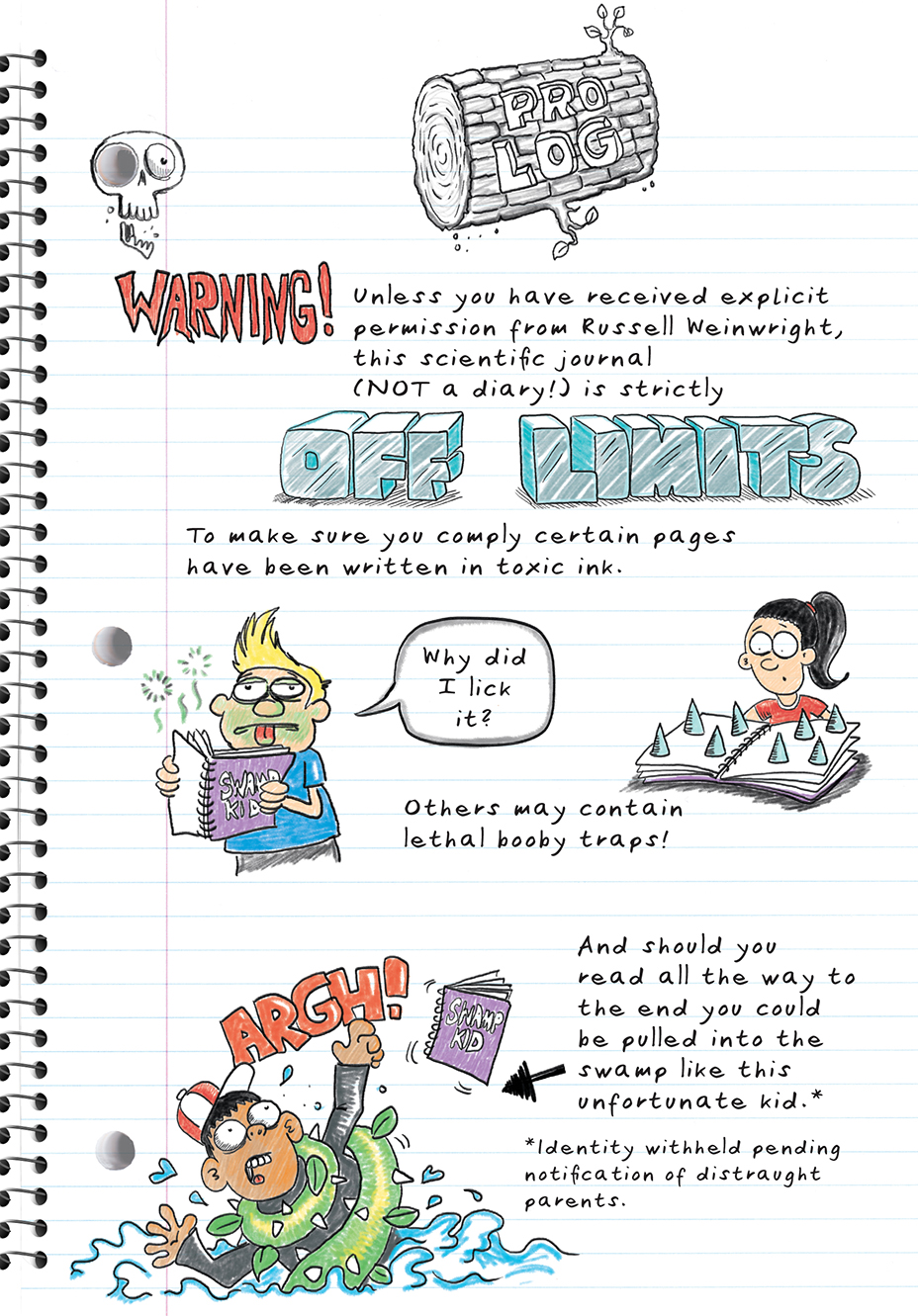