Selena Gomez cruised through The Grove on Wednesday in the iconic trolley, heading straight to the Coach store. She was meeting 200 fans who’d purchased bags at her Coach x Selena Gomez pop up shop, open August 31 to September 10.

The collection, her second with Coach, launched August 14 and finally lets consumers see Gomez’s designer style — and it turns out she’s a fan of rabbits.

“Coach has been known to having the T-Rex or the unicorn, so when I began working on my collection, I wanted to come up with my own take on this,” Gomez tells The Hollywood Reporter in a statement. “I was reminded of rabbit I had when I was child who was my favorite pet and I brought that up to [Coach creative director] Stuart [Vevers] while we were designing, and then it went from there.”

Her muse turned into a motif that runs through her designs: a rabbit on its hind legs, pictured on wallets and sweaters. A second motif was inspired by Gomez’s own positive self-talk, with a print in Gomez’s handwriting reading, “Not perfect, always me.”

“It was also important to me to have an empowering message inserted into the collection and I chose to incorporate the message ‘Not perfect. Always me,’ which are words I remind myself constantly and think it’s an message everyone should remind themselves of,” Gomez says. “No one is perfect and we need to know that’s okay.” 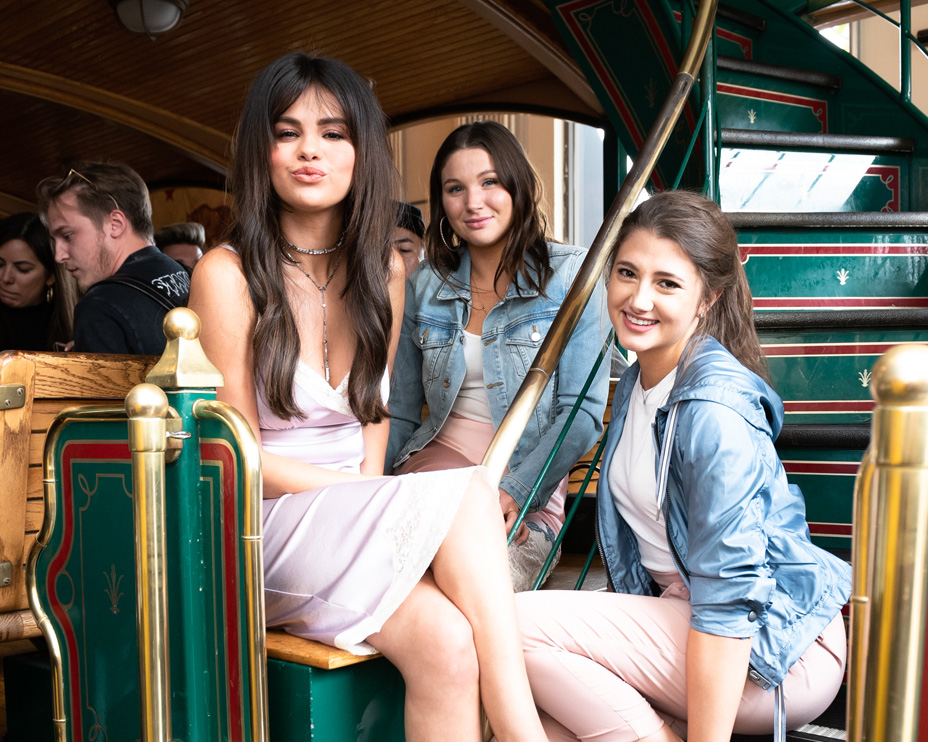 The line introduces two new bag silhouettes designed with Vevers — the Selena Bond and the Selena Trail bag — with bags in black, pink and wine tones ranging in price from $195 to $475.

Also in the mix are ready-to-wear pieces that fit into Gomez’s own cutesy style, which her stylist Kate Young describes to THR as embodying the “easy, sensual, cool girl.”

Gomez characterizes the capsule as a blend of “feminine, classic and comfortable.” She expanded with accessories from charms to phone cases, along with leather jackets with faux fur ($1,095), pink lace skirts ($295) and cozy bunny apparel (take your pick from sweaters, cardigans and hoodies).

Alright. Speaking from my heart for over an hour to someone who puts those thoughts into paid words can be hard for me. The older I get the more I want my voice to be mine. This is all apart of my work within an industry that’s been around longer than all of us have been. The purpose of my interview was three fold. My work with A21, my new collection with Coach, and some new music. As I’m aware there will always be interests in one’s personal life because that’s the pace of our ‘social’ generation. I’m grateful for my position and I will always find ways to make my job more about others and giving back— all while having the best time with my music, fashion, film and my love for learning about the world that I’m eager to tap into more and more. Church is a name for something far more personal. There’s always agenda seeking information on such a subject and I understand why. Rarely do I mention church (and I didn’t) but I’ll always feel comfortable talking about my values and beliefs. I respect that from everyone and anyone. I understand that reporters are working to grab the attention of a reader, however I will always work to ensure that what is public represents my truth. I’m a bit bummed but rarely surprised. Y’all know me and my heart. I can’t help it. So I’ll post some of MY photos from the collection and work with A21. My heart. And maybe edit my actual lyrics as you will all hear it soon I love you guys to the moon and back. For more information on the work I do with A21 please, please visit link in my bio. So much more on that soon!

Her journey with Coach began with the launch of the Grace bag in August 2017, the same summer she underwent her kidney transplant due to lupus.

The Revival singer was interested in working with Coach, knowing “they had recently gone through a reinvention.” Gomez says she had an “instant connection” with Vevers, who joined Coach in 2013 from Loewe, owned by LVMH Moët Hennessy Louis Vuitton.

After the Grace bag, she says the ready-to-wear line was natural. “I always want to push myself and grow so designing a capsule collection seemed like the ideal next phase in our relationship,” Gomez tells THR.

Though she “never even considered buying a designer bag when I was younger, I do remember saving up to buy a Coach wallet with my cousin when we were younger and that was quite a big deal at the time.” Her young fans, hoarding outside the Coach store to catch a glimpse of the pop star, had similar experiences purchasing her bags before snapping a photo with her (many carried the Trail bag, similar in silhouette to a makeup bag, in pink or white as they lined up for the meet-and-greet).

Now Gomez has a whole line that fits into her cool yet elegant style: “They’re very much what she likes to carry on a daily basis — so it’s pretty seamless,” Young tells THR of the partnership.

In addition to Gomez, whose breakout was on the Disney Channel show Wizards of Waverly Place, Coach has also collaborated with Disney for “A Dark Fairytale” collection, releasing Snow White-inspired totes, jewelry and jackets. Fans of the leather company include Chloe Grace Moretz, Winona Ryder, Emma Roberts and Millie Bobby Brown. 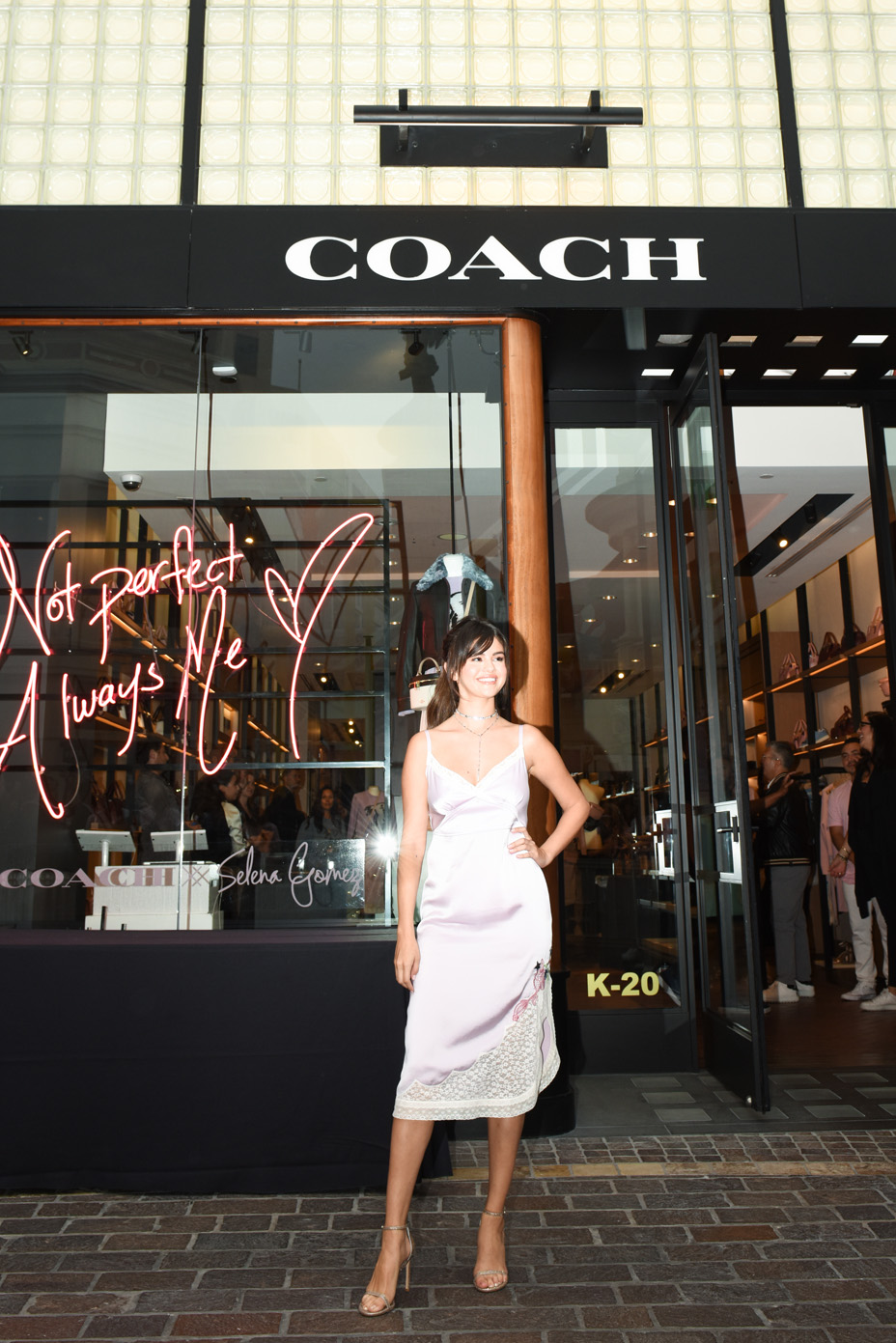 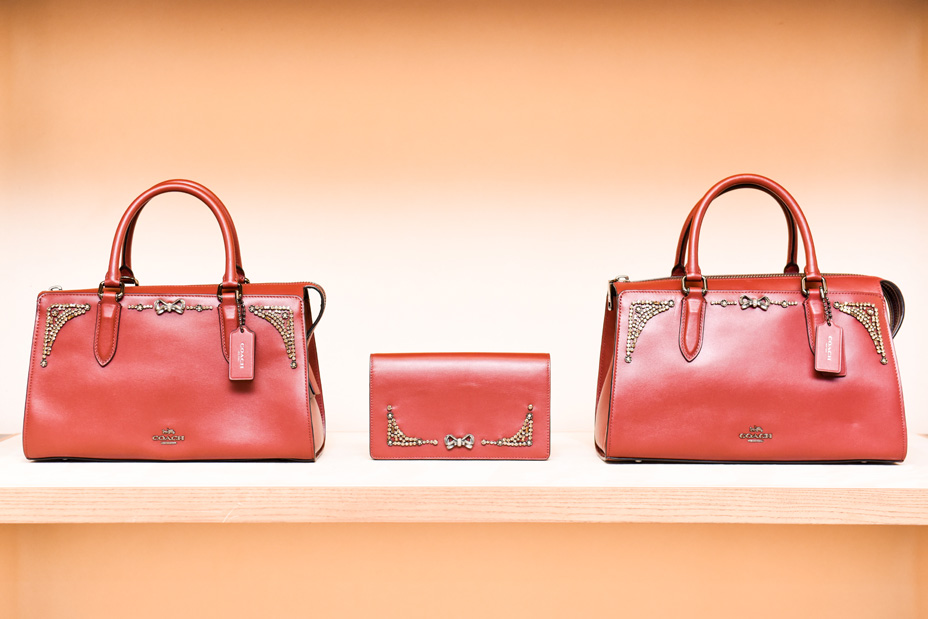 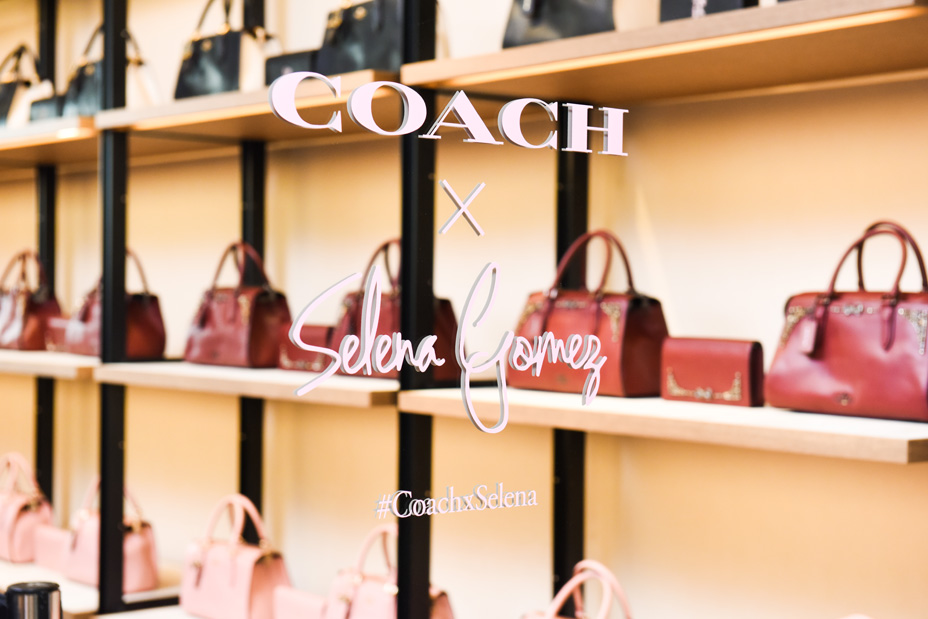 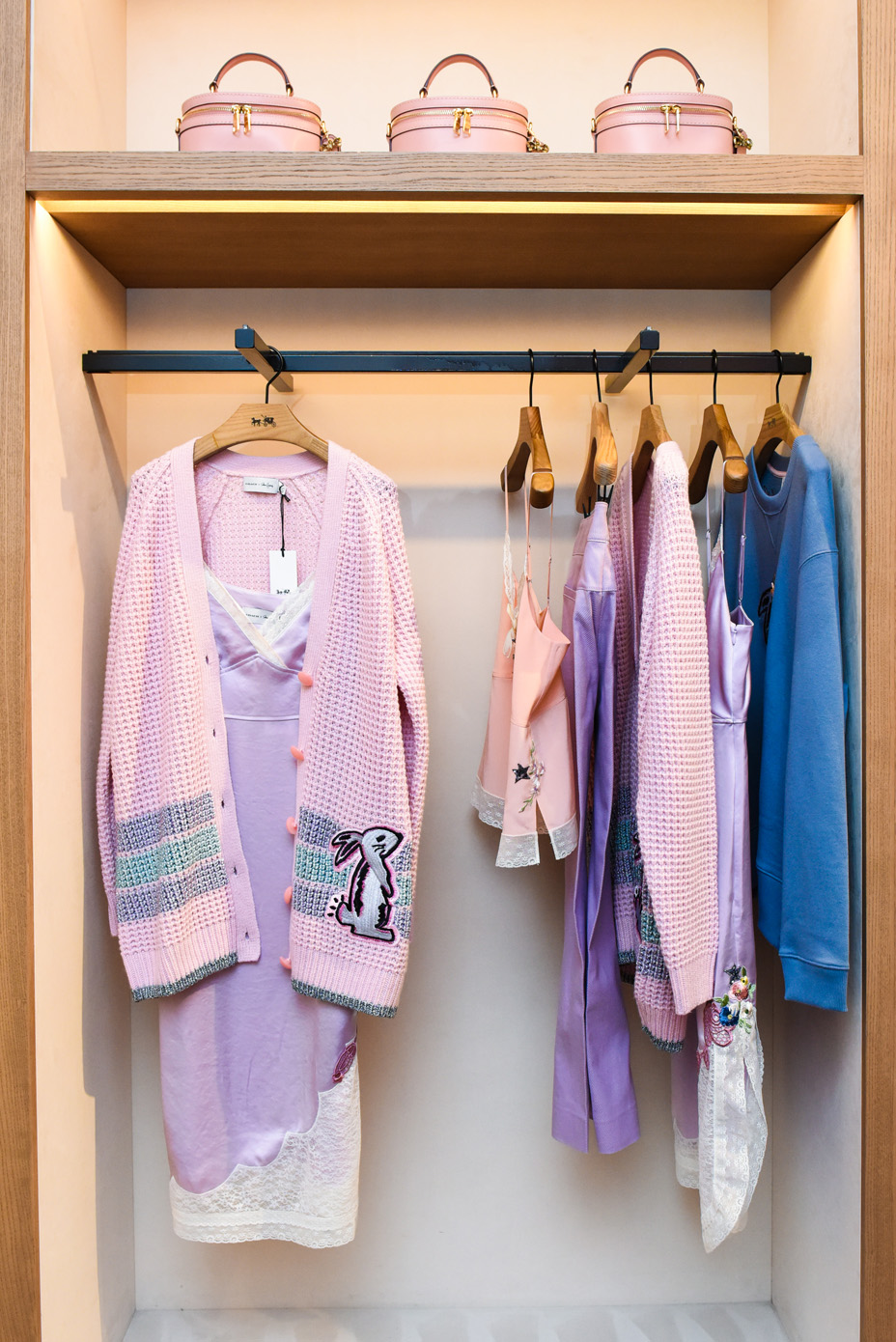 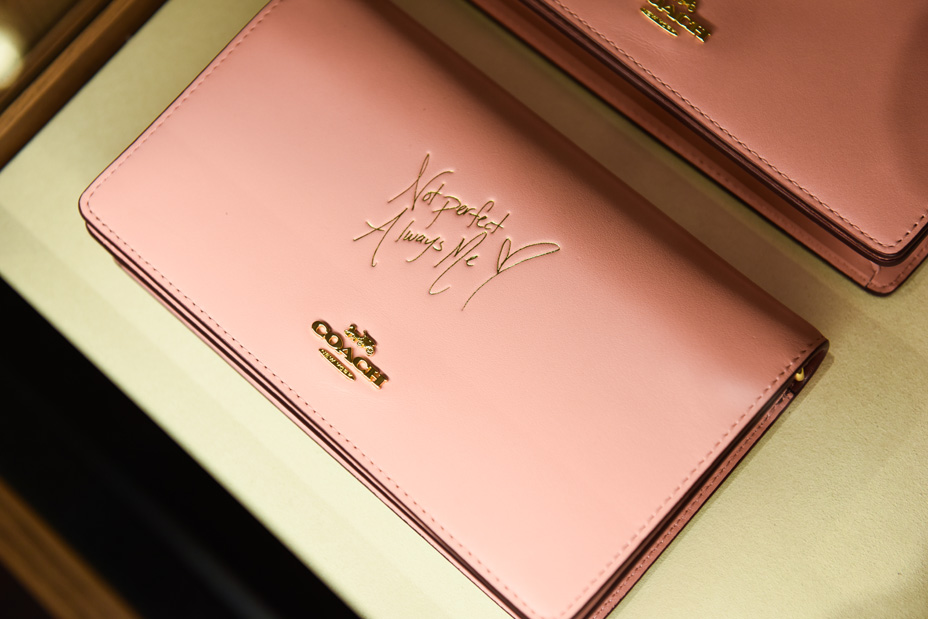 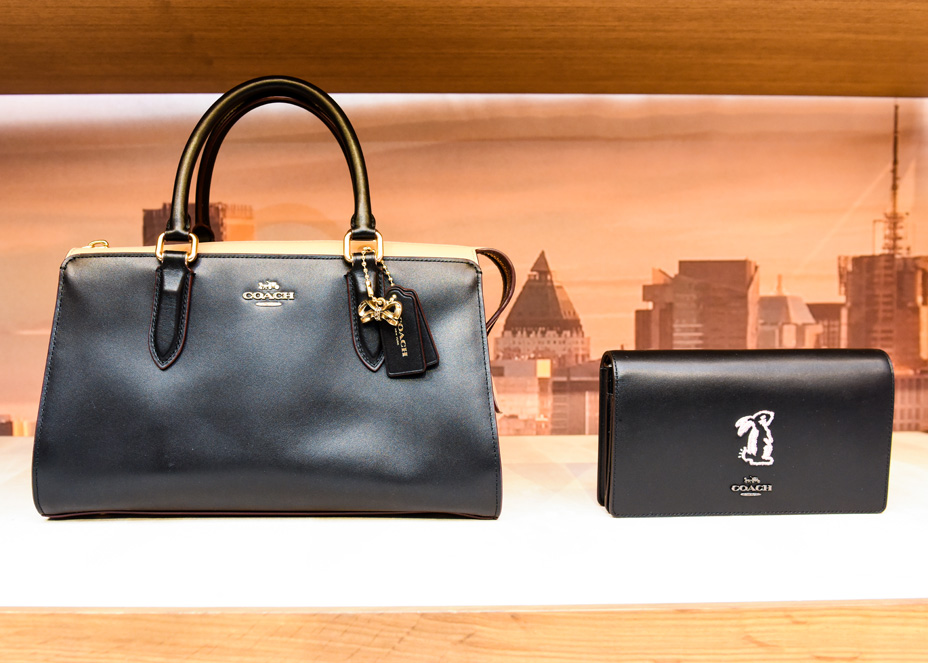