After a three-month hiatus, the Walt Disney Company’s largest Magic Kingdom in Asia is back in business.

The Shanghai Disney Resort threw open its gates Monday — albeit with strict public safety measures in place and low limits on capacity.

The first group of 200 lucky visitors were allowed into the park at the usual opening time of 9:30 a.m. Guests are being granted entry in staggered batches, based on predetermined times printed on their tickets.

Shortly before doors opened, Shanghai Disneyland hosted a special reopening ceremony against a backdrop of the iconic “Floral Minnie” in spring colors. Castmembers from every themed land in Shanghai Disneyland — including Mickey Mouse and his friends, Duffy and friends, Marvel superheroes, Disney princesses, Toy Story friends, Star Wars characters and others — were on hand to invite fans back and commemorate the occasion.

Disney announced on an earnings call last week that the Shanghai Disney Resort would be its first theme park to come back online. Tickets for Monday’s reopening went on sale last Friday and sold out within minutes.

But the Chinese government has asked Disney to cap attendance at 30 percent of usual capacity, or approximately 24,000 people, to keep guests safe and to help staff adjust to new safety procedures. During last week’s earnings call, Disney CEO Bob Chapek said the park would open with an unspecified capacity lower than the 30 percent, but that numbers would gradually increase over a period of weeks. Working with local health officials, the company has implemented a range of new safety measures, including social distancing in lines, required mask wearing for staff and patrons, frequent cleaning and a temperature check upon entry.

The reopening Monday follows a partial relaunch in March of various Disney shops and facilities positioned around the theme park’s perimeter.

“Since the reopening of Disneytown, Wishing Star Park and Shanghai Disneyland Hotel in early March, we have been deeply moved by the encouragement from our guests and Disney fans,” said Joe Schott, president and general manager of the Shanghai Disney Resort. “Today, we are extremely pleased to reopen Shanghai Disneyland thanks to the unwavering efforts of our castmembers and our community.” 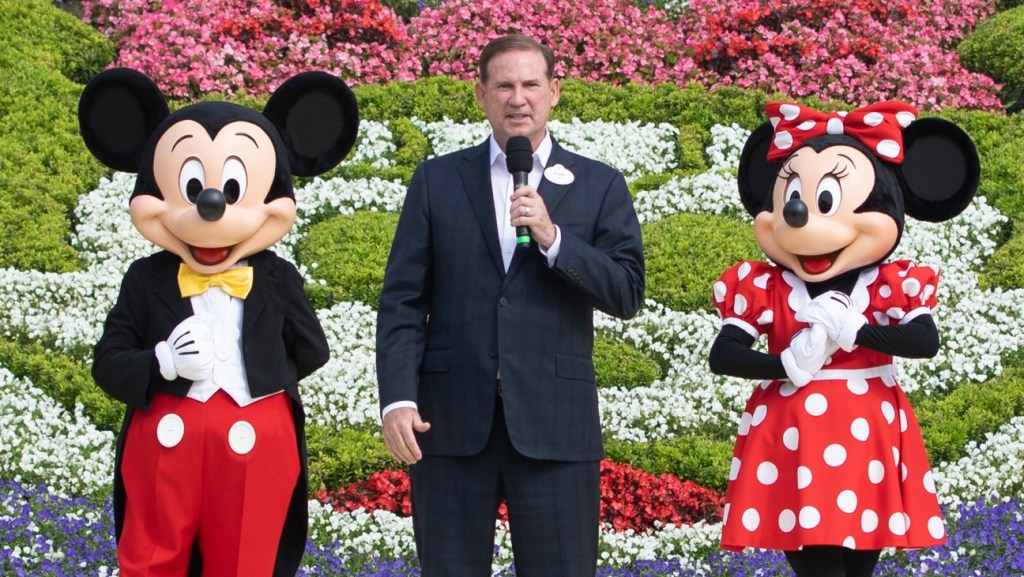 He added: “Today’s celebrations will be remembered with joy, as we look forward to welcoming our guests back to this happy place.”

The first guests to return to Shanghai Disneyland will enjoy a relatively crowd-free experience with limited alterations to the facility’s usual offerings. Nearly all of the park’s rides, attractions, shops and restaurants are reportedly open Monday, with just several live shows and children’s play zones still offline.

Due to social distancing requirements, posing for pictures with Disney characters in costume will be no-go for the foreseeable future. “But we still want our guests to have a chance to see our favorite Disney friends and get a chance to take photos of them,” Andrew Bolstein, senior vp operations for the Shanghai park, told reporters over the weekend. “A small procession of a couple of floats will come out throughout the day and surprise our guests, hopefully.”

The strong consumer response in Shanghai, so far, is undoubtedly good news for the House of Mouse, assuming the early phases of reopening can be navigated without incident.

For its fiscal second quarter ended in March, as the pandemic took hold around the world, Disney recorded an estimated hit of $1.4 billion to its income. The company’s Parks, Experiences and Products segment, impacted especially hard by the global shutdown, saw an estimated $1 billion decline in revenue.

Shanghai Disneyland’s relaunch reflects China’s continuing strides in containing the new coronavirus. No new deaths from COVID-19, the respiratory illness caused by the virus, have been reported in China for nearly a month. On Friday, China’s State Council issued guidelines stating that entertainment and leisure facilities such as parks, tourist attractions, museums and movie theaters can reopen provided they take measures such as limiting attendance to control crowds.

Disney’s theme parks in Hong Kong, Japan, Europe and the U.S. remain closed in response to the coronavirus pandemic, with no date yet set for reopening.