The scale of (almost) everything in Shanghai is massive. It’s the most populous city on the entire planet, with more than 24 million residents, covering nearly half the area of Connecticut. Wherever the eye looks, skyscrapers fan out in every direction. Of the 15 tallest towers in the world, two are here, including the 128-story Shanghai Tower, located in the Pudong financial neighborhood. The mega-city even has the globe’s largest Starbucks, one of the chain’s Premium Reserve Roasteries, that’s 30,000-square-feet.

But don’t let the size intimidate you. At street level, central Shanghai can be surprisingly intimate and peaceful, especially in the walkable neighborhoods of Xintiandi and the former French Concession. As you’d expect, there are scores of great noodle, hot pot and dumpling joints everywhere, but they’ve been joined in recent years by a wave of hip coffee shops (seemingly on every corner) and savory French bakeries.

Thanks to restrictions on the number of license plates and a safety crackdown, traffic is much better than it used to be. Sure, there are gleaming malls aplenty but there are also a surprising number of beautiful parks to stumble upon, as well as a growing lineup of art museums and homegrown fashion labels like Phaedo and Fang Yang’s Atelier by Fang. No wonder Victoria’s Secret decided to hold its 2017 runway show in this cultural capital, which has counted the likes of producers Brian Grazer, Cassian Elwes and Jerry Bruckheimer, designer Victoria Beckham and stars Orlando Bloom, Mark Hamill, Tom Holland, Robert Downey Jr. and Daisy Ridley among recent visitors.

As the city gears up for the opening of its 21st annual Shanghai International Film Festival this weekend — running June 16-25 at 45 venues, with highlights including the China debut of this year’s Cannes Palme D’Or winner Shoplifters and tributes to Luis Bunuel and Ingmar Bergman — here’s where to stay and what to eat and experience in what is sometimes called the Paris of the East. 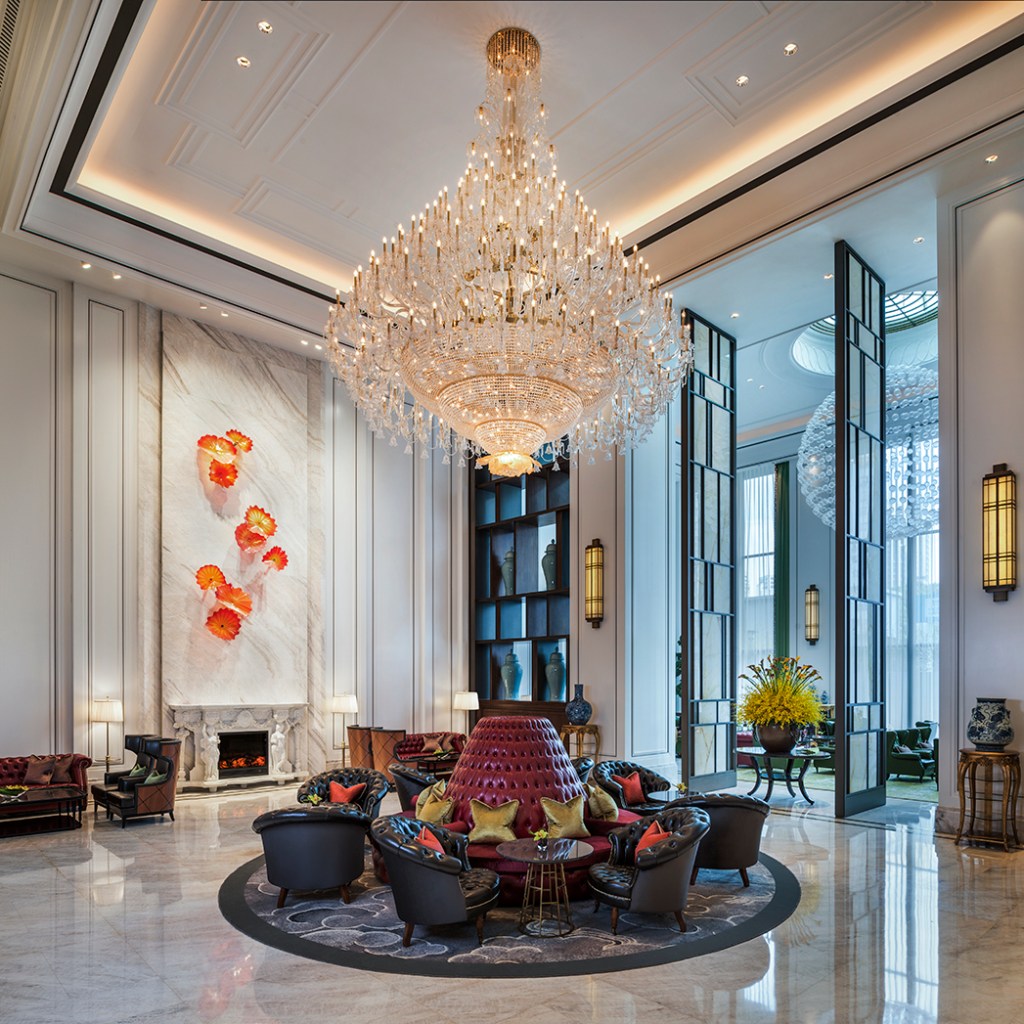 A building rush in the last decade has seen Shanghai’s hotel offerings increase dramatically both in number and heights of luxury. 2009 saw the opening of the Peninsula on the Bund and the boutique PuLi Hotel (a fashion crowd favorite), while in the last couple of years, the city has welcomed a W Hotel, a Capella (located in a historic 1930s complex), a Bellagio, the wellness-focused Anandi, a Sukhothai and the Wanda Reign, located directly on the historic Bund riverfront area. Expected soon are an Edition Hotel, due later this year, and a Bulgari Hotel, opening June 20.

Opened in 2017 in the fashionable Jing’an neighborhood, the St. Regis welcomes guests with a soaring lobby dotted with inviting leather Chesterfield-style sofas and hung with opulent glittering chandeliers, a fitting foreshadowing of the mix of classic luxury aesthetics and warm service that the hotel brand is known for. Featuring 436 rooms located on the building’s 36th to 68th floors, the property includes six hotels and bars (including a drawing room for afternoon tea), spa, athletic club and subterranean pool. The large rooms (from $475 per night) feature not only fantastic views of the city skyline and beautiful freestanding soaking tubs but also butler service (including complimentary pressing of two garments per day.)

The breakfast buffet is a particular treat, with a range of offerings from Western baked goods to an Asian soup noodle station. The area is very walkable, located just a couple blocks from the luxury boutiques (such as Prada, Louis Vuitton, Tom Ford, Christian Louboutin) of Nanjing Road West and less than a 10-minute stroll from the Shanghai Natural History Museum and the peaceful and playful Jing’an Sculpture Park surrounding it. Also close by: The Shanghai Majestic Theater, a classic Art Deco theater built in 1941, one of the festival’s screening locations. 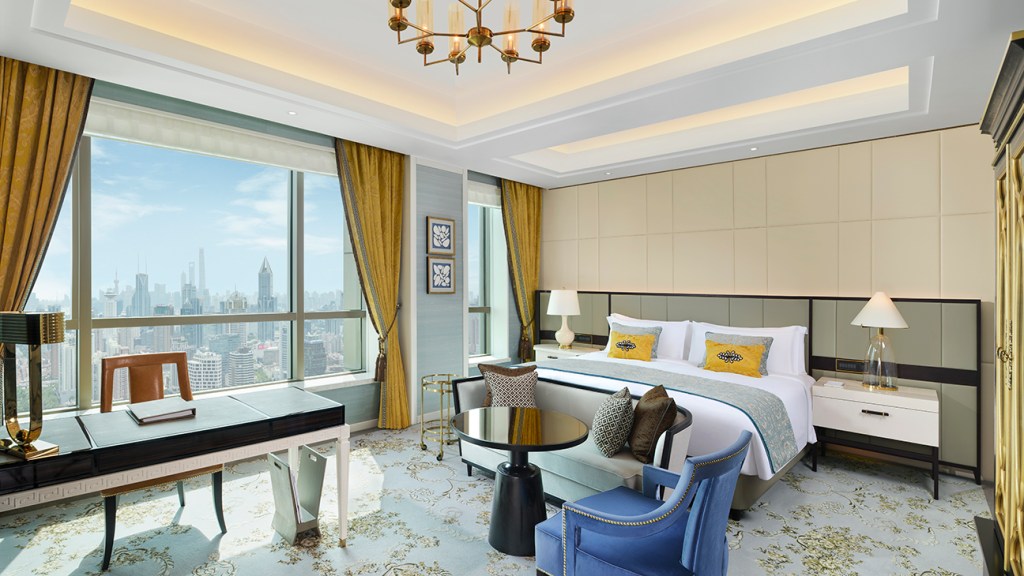 Located in the same Jing’an mall complex, HKRI Taikoo Hui, as Starbucks massive new Roastery, The Middle House (rooms from $450 per night) is the latest property from Swire Hotels, known for its Opposite House in Beijing, Temple House in Chengdu and Upper House in Hong Kong. Their newest, opened in April of this year, is a sexy stand-out that brings something uncommon to the Shanghai hotel scene: a boutique hotel with undeniable personality. Inside  its two dark crescent-shaped 14-story buildings (one houses 102 long-stay residences; one is the 111-room hotel), Italian architect Piero Lissoni has created a design-driven modernist property, where a huge specially commissioned Murano-style glass chandelier (made of 3,760 individual pieces) hangs in the lobby, which is covered in verdant green tiles cast to look like a wall of bamboo. Inside the guest rooms, the aesthetic is more spare and muted (think low-slung furniture and ebony-stained wood floors), offering visitors the feeling of a hideaway amid the big city.

The property includes three restaurants (Frasca for Italian food, Sui Tang Li for Chinese and New York chef Gray Kunz’s Café Gray Deluxe) plus an underground-level pool and spa area that connects the two buildings. Don’t miss seeing Lissoni’s stunning wood staircase inside the residence tower, a piece of sculpture in itself. The staff is friendly and helpful with suggestions for enjoying the city, including the luxury shopping action on nearby Nanjing Road West. 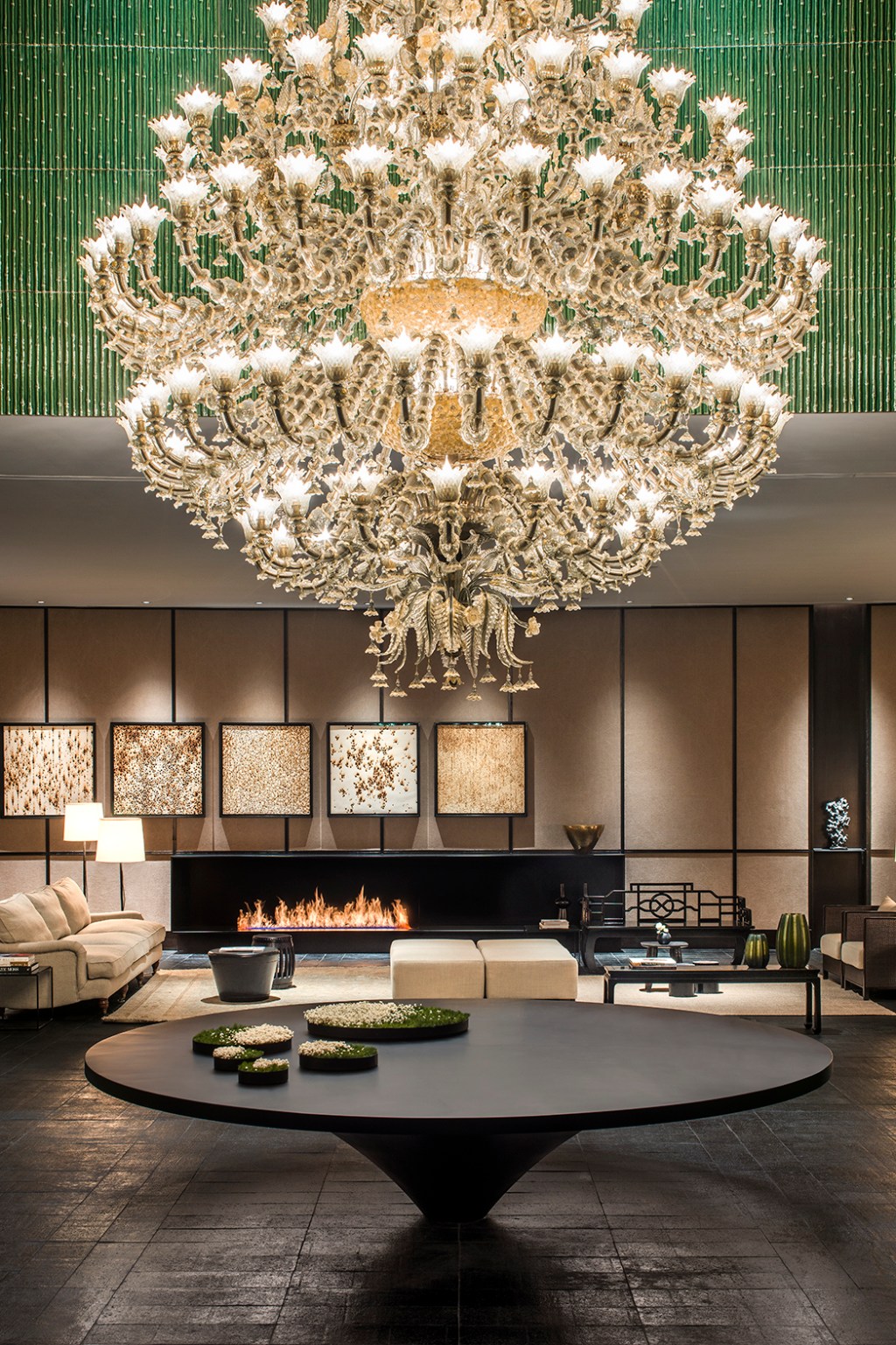 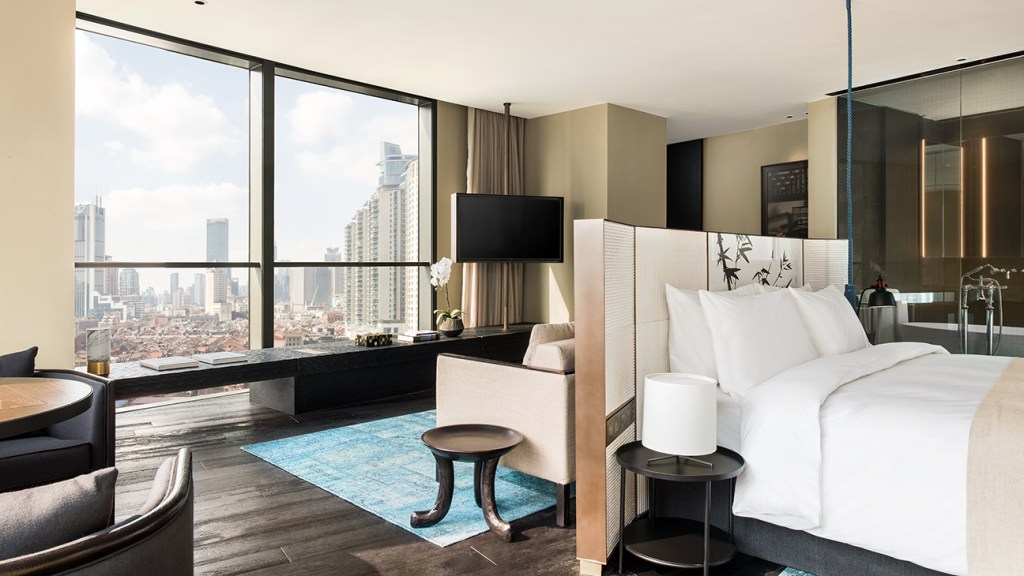 All of the centuries-old Ming and Qing dynasty stone villas that make up Aman Resort’s new Amanyangyun property (starting rates from around $940 a night) are originally from Jiangxi Province, located more than 400 miles southwest of Shanghai. There, they had been doomed to be submerged by a new dam project, until a Chinese real estate mogul decided to save them, along with the camphor tree forest that surrounded them. He decided to have them transported, brick by brick, to a location about an hour from Shanghai’s city center, where they were reassembled, and reimagined by Australian architect Kerry Hill, as one of the most unique and serene hotels on the planet. Amanyangyun offers 24 suites and 13 four-bedroom villas — ranging in size from around 8,500 to 11,000 square feet and meant to be shared by family or a group of friends — which mix the new (modern furniture) and the old in restrained luxe style. Guests can dine at one of three on-site restaurants and take classes in tea ceremony, incense appreciation, brush painting, traditional Chinese music and calligraphy. 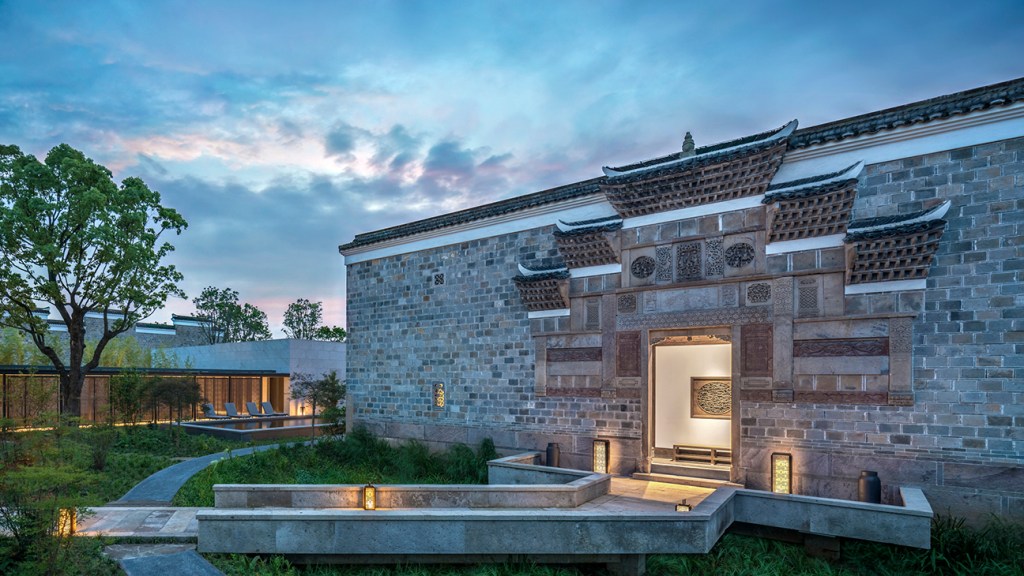 Shanghai is one of the great food cities of the world, offering every type of Chinese cuisine, plus restaurants from some of the world’s top celebrity chefs. 2017 saw the inaugural edition of the Michelin guide to Shanghai, with 30 restaurants receiving stars this year, including two three-star establishments, Cantonese-style T’ang Court at the Langham Hotel and French chef Paul Pairet’s Ultraviolet.

Others to gain notice from Michelin include Jean-Georges Vongerichten’s Jean-Georges on the fourth floor of Three on the Bund (his Italian restaurant Mercato is on the sixth floor), two vegetarian spots Dashu Wujie and Fu He Hui, the Peninsula Hotel’s Cantonese-style Yi Long Court and its European-style Sir Elly’s (where the terrace offers one of the most stunning views of the Bund and of the immense skyscrapers the rise just across the river in the Pudong financial district).

For a fun outing where libations flow, check out the Sunday brunch, followed by the pool scene, at the W Hotel, which has one of the very few outdoor swimming pools in the city located on a terrace offering a sweeping view of Pudong. And if you’re a fan one of Din Tai Fung’s three Los Angeles area locations, the stellar soup dumpling chain has 10 locations in Shanghai. Prefer a hole in the wall spot? Sample the fiery Hunan cuisine at Spicy Moment in the former French concession or enjoy comfort-food Japanese dishes at Café Dan, located inside Tianzifang, a shopping area comprised of a maze of alleyways.

Make sure to see one of the most inventive new pieces of architecture in the world, the Fosun Foundation’s kinetic building at the Bund Finance Center. Designed by Foster + Partners and Thomas Heatherwick, the structure is encircled by a curtain-like array of cylinders that move in circular fashion around the building every few hours. For a look at the glories of Shanghai’s architectural past, take an Art Deco walking tour (such as tours bookable through AirBnb Experiences), and learn about the Hungarian immigrant Laszlo Hudec, responsible for building some of the city’s most treasured gems of the 1920s and 1930s including the Park Hotel and Grand Theatre.

Tips: To make a trip to Shanghai as easy as possible, make sure to secure a Chinese visa, download and set up WeChat on your phone (the main social app used to communicate in China), set up a VPN account to access Western websites that are blocked in the country (a dependable one is Express VPN) and for more info, start following one of the English-language sites dedicated to what’s new in Shanghai such as Smart Shanghai, That’s Mags and Time Out Shanghai. 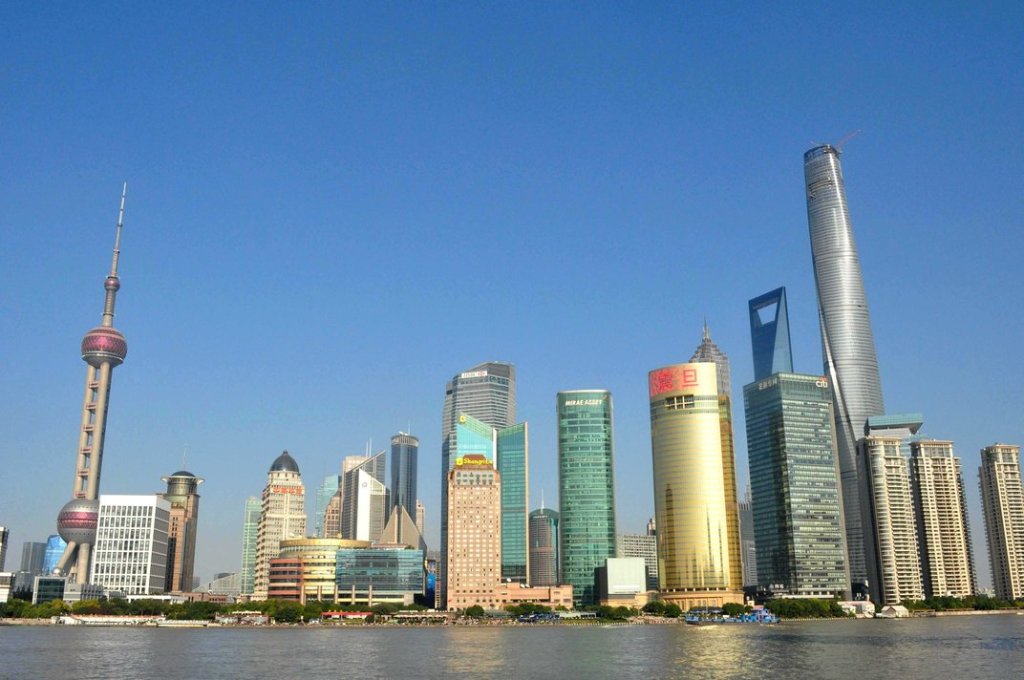 Shanghai: 5 Places to Eat and Drink During the Festival