“Walk with me,” Sharon Stone says as she moves toward the front door of Gagosian Gallery in Beverly Hills on Wednesday night after moderating a panel for the Women’s Brain Health Initiative. The door opens and just as she steps foot onto Camden Drive pavement, the sidewalk lights up with flashbulbs from nearly a dozen paparazzi.

The street goes dark seconds later and one man points a video camera in Stone’s direction, delivers a TMZ-ready question about Harvey Weinstein. Stone pauses and readies an answer. “Given the sensationalism that this particular scandal has created and all of the apparent outrage, I certainly hope that one of the biggest things that will occur is that the unprocessed rape kits will be processed and there will be respect given to unheard victims from the past who need serious and deserved legal attention,” she says rather calmly, despite the ambush-style press conference, expertly shifting attention from Weinstein to a group that could benefit from her voice.

Kaley Cuoco on Tackling Sobriety, Five Versions of Herself in Season Two of 'The Flight Attendant'

It’s a voice Stone just relied on to moderate a nearly one-hour panel inside the chic 90210 gallery, where she sat alongside longtime friend Melanie Griffith, producer (and Stone’s onetime agent) Paula Wagner, Jimmy Choo founder Tamara Mellon, fashion insider turned producer Crystal Lourd and brain health expert Dr. Pauline Maki of the University of Illinois at Chicago. It was a wide-ranging discussion on everything from brain disorders and intimate relationships to current events and the state of the insurance industry.

But before Stone got started, WBHI founder and president Lynn Posluns delivered opening remarks (following a rooftop-set cocktail party) and detailed the urgency for increased funding and research for women’s brain health and aging. While the science catches up, Posluns said women can keep their brain healthy by engaging in regular exercise, which can help combat dementia, and by engaging in regular sex, which can boost brain power.

Then it was Stone’s turn, and the actress gave everyone something to think about after detailing the harrowing journey she endured after suffering a stroke. “I had the kind of stroke where one minute you’re standing behind the couch and the next minute you’re flipped over the couch on the coffee table and everything is everywhere,” Stone said of the moment, which came in the fall of 2001. “It’s a little bit like you see in the movies when Zeus hits somebody with a lightning bolt and they just go flying. It’s a little bit like I felt like I was hit by that lightning bolt. I don’t know how long I was on the floor. It was three days before somebody took me to the hospital.”

After making it to the hospital, Stone wrestled her way out of exploratory brain surgery, she recalls, and battled a doctor who was about to tell her story to People magazine. Also this: “Ultimately after six days in the hospital, they were going to send me home because they thought that I was acting. This happens to me a lot. This happened to me when I had gallbladder disease, this happened to me with dental problems. People think that as an actress or a high-profile person that you’re acting.”

It’s not every day that a high-profile person divulges the ravages of such a severe health situation. Following her “massive brain hemorrhage and stroke,” Stone, who has been left with a “brain seizure condition which I take medication for,” said that during her years of recovery, she saw so many things slip from her life.

“I had lost my marriage, lost custody of my child, lost my place in line in the business, lost all my money because I was paying so many different things,” she detailed. “[I was] scraping by. I know what it’s like to go through a situation where you are the top, top, top of your field, to absolutely wiped out. A lot of it was simply because no one could look at me and simply understand that I was having a brain hemorrhage.”

But, today, the actress is standing on solid ground. “I now have custody of my child again. I’ve paid off my house again. I’m back in the black. Several months ago, I rehired managers and agents,” said Stone. “To say that it’s been an easy journey or a simple journey is not the case.”

She then pushed the spotlight toward the panelists. (The panel nearly got interrupted as one guest fainted near the door way and had to be taken away by ambulance.)

Griffith revealed an epilepsy diagnosis and detailed a long history of seizures, two of which happened in Cannes: “I had two seizures, one, they took me off the boat. I had this major grand mal seizure, and they took me to the hospital in Cannes and then brought me back to the boat. And then I had another seizure and I went back. They did the EEG and started to look at it seriously. When I came back [to the U.S.], I was diagnosed with epilepsy and nobody had said to me over a period of 20 years, no one paid enough attention to even diagnose me.” She’s now stable, thanks in part to a split from longtime husband Antonio Banderas. “I got divorced, which is the real healer for me,” said Griffith, upon which the audience erupted in laughter.

Wagner cautioned women to not get caught up in being 25 years old. “You will be older longer than you will be younger,” she said, adding that more attention should be paid to the mature demographic. “Cherish the wisdom of older people.”

Lourd suggested women spend more time pausing to “smell the roses.” She expanded on the thought later to The Hollywood Reporter: “I want women, young women, all women to not be so hard on themselves. We’ve all taken on so much more as the world has fissured. I feel like everyone is exhausting themselves, especially women, because we do have more jobs. Let’s face it. We have children, families, houses, jobs, working with charities. It’s a lot of responsibility.”

Mellon delivered a thoughtful answer to the seemingly age-old question, “Can women have it all?” “We don’t ask men that,” she countered. That said, Mellon said it is possible. “We can have it all,” she replied. “We can’t have it all perfectly. … Live in the mess.”

Speaking of which, a peek at recent headlines doesn’t turn up much that appears anything close to perfect, a point made by Stone near the end of the panel discussion. “We are in a very cataclysmic moment in the world,” she said before offering suggestions in how to best respond to the negativity. “We should share and shoulder all of life together. If we do that with love, compassion, respect and admiration, then we can see the person next to us.”

Later, as she faces the paparazzi, she turns to THR and explains what it has been like to now be on the other side of her health crisis.

“It’s been a very long and very arduous journey, obviously,” she says. “These are life-changing events; you have to be willing to not hang on to the life you had before. You have to say goodbye to the shore and know that there is a big ocean you are going to have to swim across. Sometimes you swim so long that you think all you’re doing is swimming, and one day you turn around, you are standing on another shore and you don’t even know how it happened because you’ve been focusing so much on the swim.”

Or then you look up, and you’re standing on Camden Drive in Beverly Hills facing a line of photographers. With that, Stone says goodbye with a glowing smile, takes a seat in a waiting black car and shoots off into the night. 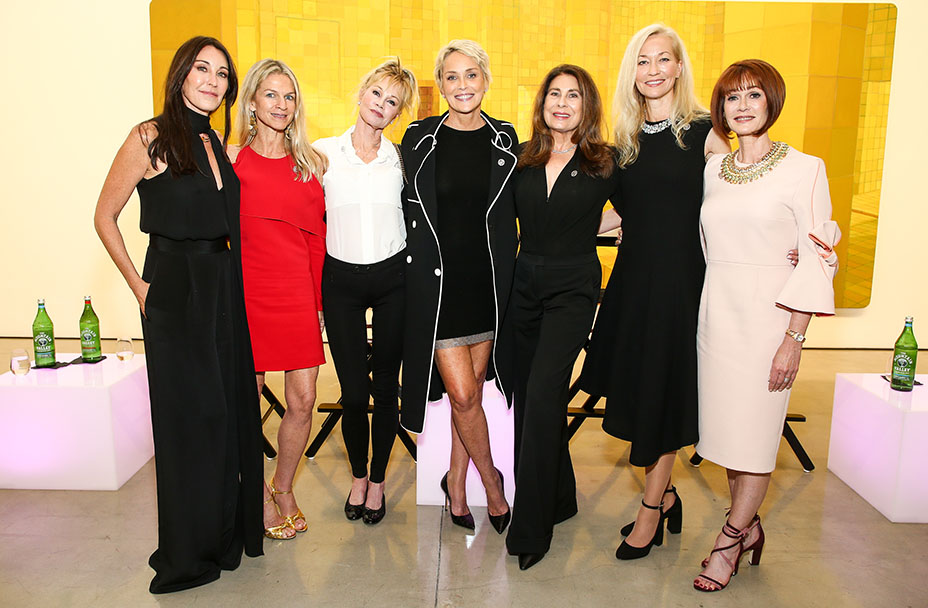 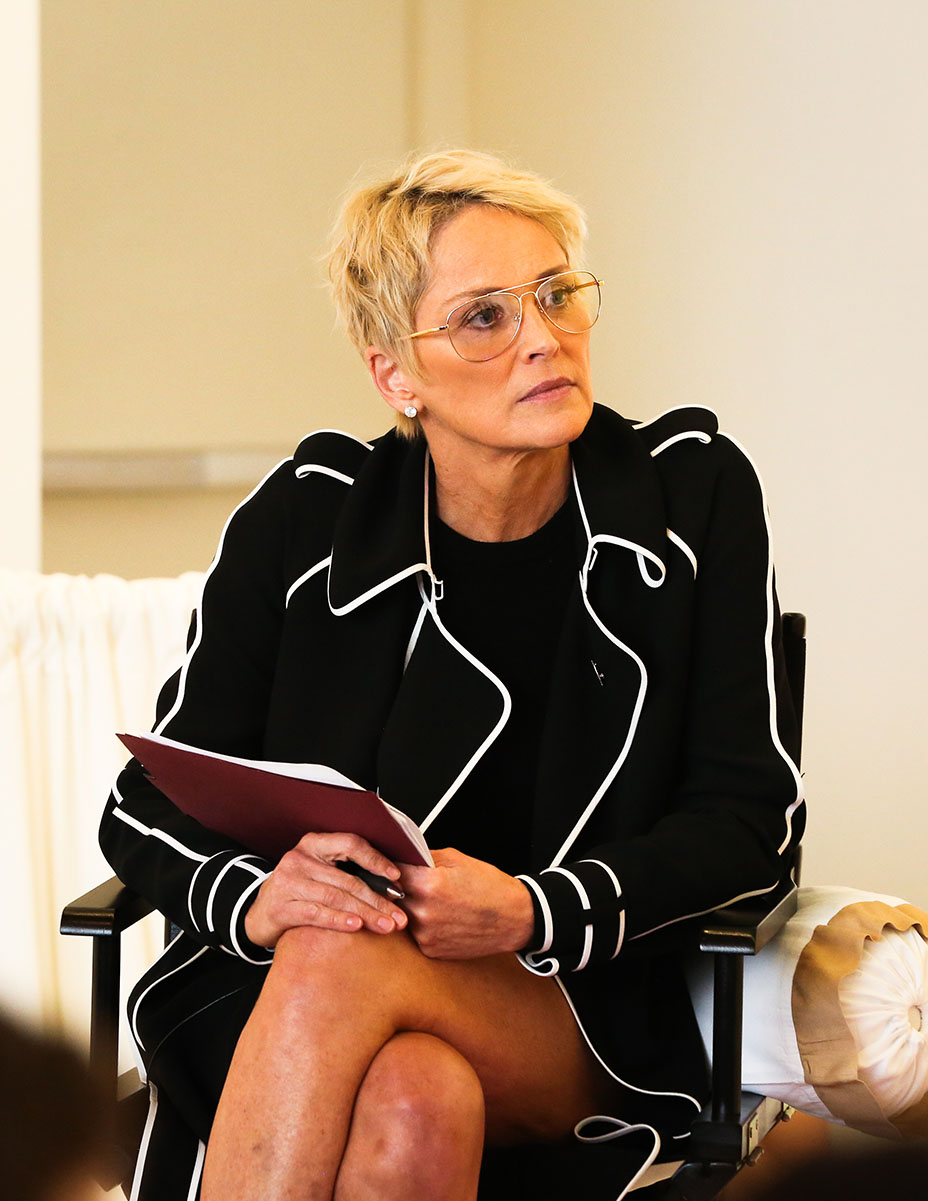 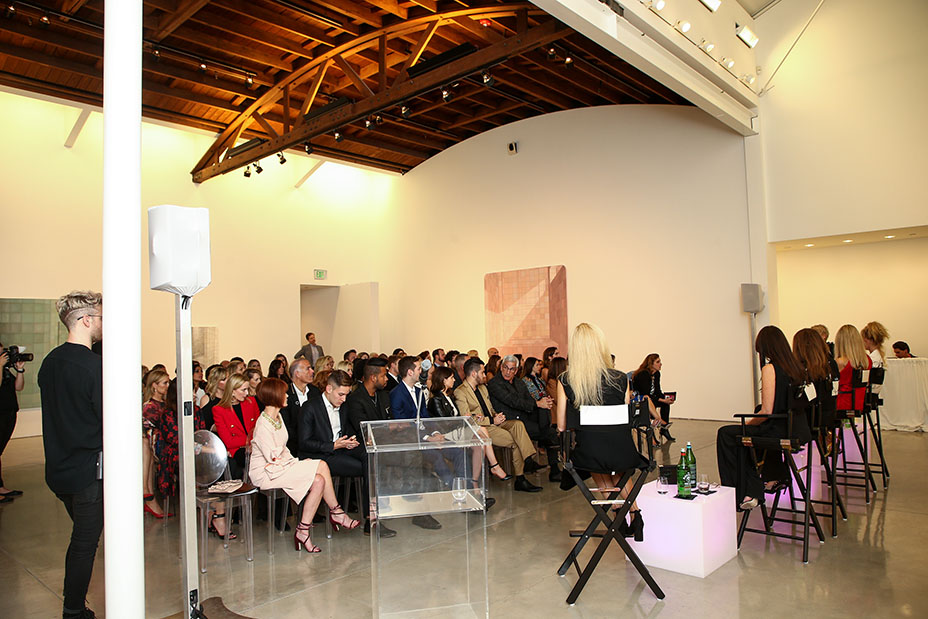 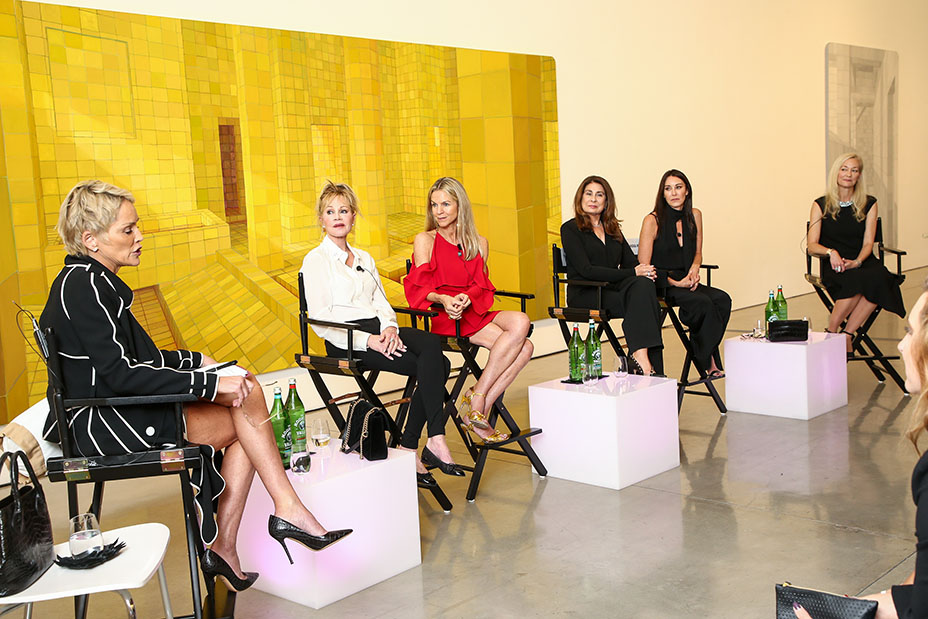