Shepard Smith wanted to be surrounded by fire. Not just video of flames burning in a forest, but the sound that accompanies them.

“Aerials are great, drones are great, but what is best is a ground picture that includes natural sound,” Smith said of planned coverage of the West Coast wildfires during a recent production meeting for his new CNBC show, The News With Shepard Smith. “Fires create weather and weather creates sound. We touch more of their senses if we can find that video.”

As it happens, Smith’s team has had to adapt quickly to getting their message across via video. Not only are Smith and CNBC launching a new evening newscast, they are doing so amid a pandemic that brings with it limitations and challenges that grounded much of the TV business for months.

And so, the production meetings are mostly held remotely over Zoom or Microsoft Teams, with some staff, including senior executive producer Sandy Cannold and executive producer Sally Ramirez beaming in from their offices, a small number of producers sitting at their desks in a largely empty newsroom, and the rest joining from home.

“You are launching a shuttle without half the people or more in mission control,” Cannold told The Hollywood Reporter. “That is our challenge.”

The protocols are part of a new normal: weekly COVID tests, masks, socially distanced control rooms, all part of a game plan to get Smith’s return to cable news off the ground. “We will have the people in-house that we need to launch the show,” Ramirez says.

Smith joined CNBC in July, 10 months after he shocked the TV news world when he abruptly left Fox News. He promptly became one of the most desirable free agents in the business.

“I spoke to all the networks, it was this one that said, ‘What we want to do is a facts-only newscast,’” Smith says.

Of course, in the world of TV news, hiring a new anchor is only the beginning. CNBC had to build a studio and a team for Smith, all while navigating pandemic restrictions.

The entire set and studio was designed and built in eight weeks at CNBC’s Englewood Cliffs, New Jersey, headquarters with COVID protocols in mind. To that end, there are LED screens surrounding Smith’s desk, and ultra-high-definition monitors that can be brought in (or removed) to bring guests “into the studio” with Smith. 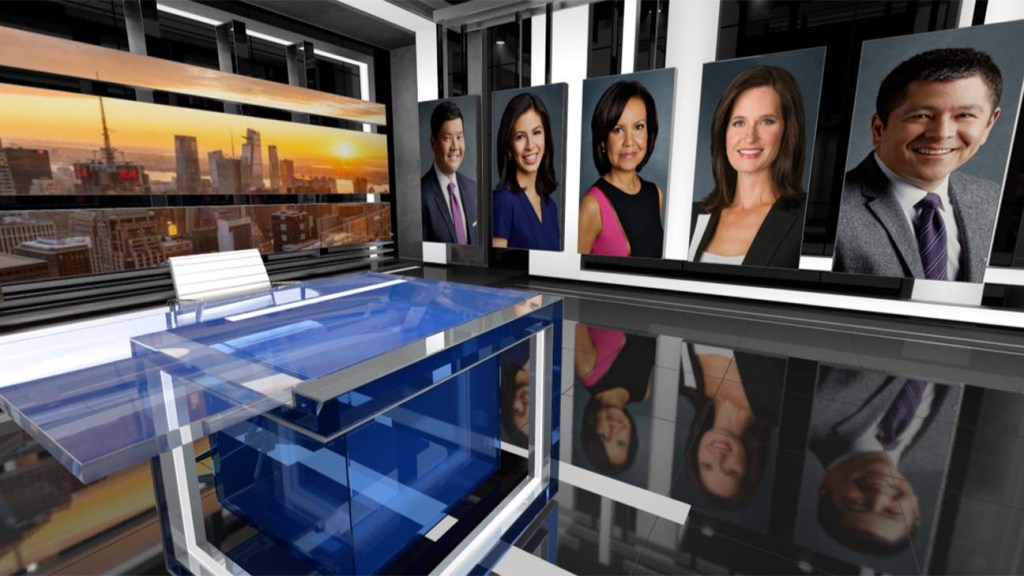 That was how the wildfires came into play during the production meeting, which was held over Microsoft Teams on Sept. 11.

“In terms of scale, the graphical representation that we can get across on the wall could be stunning,” Cannold told the team. “Shep could be positioned in front of it as we toss to the pieces.”

While much of the rest of the media was focused on early revelations from Bob Woodward’s book about President Trump that day, Smith’s team decided that the fires were the top story.

“Washington seems to suck the life right out of the room,” Smith says. “This is a real story affecting real people, with so many overtones and policy issues involved in it. It must be covered. If it were near New York it would be on 24/7.”

To hear Smith tell it, all the effort going into the program, from the graphics and the video to the sound and the design of the cavernous new studio, is about delivering the news, and only the news, to viewers at home.

“What we want to do, and what I have long wanted to do, is a just-the-facts newscast,” Smith says. “I have no issues with opinion people, especially if they begin with fact and opine from there, but there is an absence, from my perspective, in a fact-based news-only hour, where we lay out the facts, we bring in experts to help understand them better, we add context and perspective, but we don’t opine on them.”

Smith’s team comprises CNBC veterans, former Fox News colleagues and new hires. The pandemic meant that not only did the channel have to staff up remotely, but that relationships had to be built remotely as well.

“I took a job for the first time in 31 years doing journalism where I didn’t meet my boss until this week,” says Ramirez, who had been executive news director at KHOU, Houston’s CBS affiliate.

It’s a challenge that also applies to the journalists in the field that Smith will rely on once his show debuts, who have to gather information, interview subjects and piece together stories while navigating the new normal.

“I am just the one telling people about it, after the work has already been done,” Smith says. “The job of people collecting all the information is just infinitely more complicated, you want to be close to people so that you can share what it is they are doing, so you can understand what they are doing.”

It’s all part of an effort to bring viewers closer to the news, and the journalists reporting on it, though Smith is quick to add that once he is allowed to do so, the monitors will be replaced by real people.

For now, though, Smith will be in the studio, bringing the news inside with him and around him.

“I thought it was going to be nearly impossible because so much of this is about understanding how each other thinks, and you want it to be such a collaborative effort,” Smith says of launching his show amid the pandemic.

And yet during the production meeting things flowed smoothly as producers ran through story ideas and angles, potential images and interviews, and local affiliates they could tap for video or reporters on the scene.

Smith, who was wearing a blue CNBC baseball cap with an American flag embroidered on the side (Ramirez says “I am yet to see him not wearing it”), says the transition to his new job has been a smooth one, despite the logistical challenges.

“I am proud to wear these colors; I am just so excited to be back in the game,” says Smith. “Ours is an industry that is known over time to be a very backstabbing thing. You have a bunch of high-profile people who are public figures and, you know, the knives come out. It is not like that here. I have been here for months now, and it is the most warm and welcoming place I have ever experienced.”